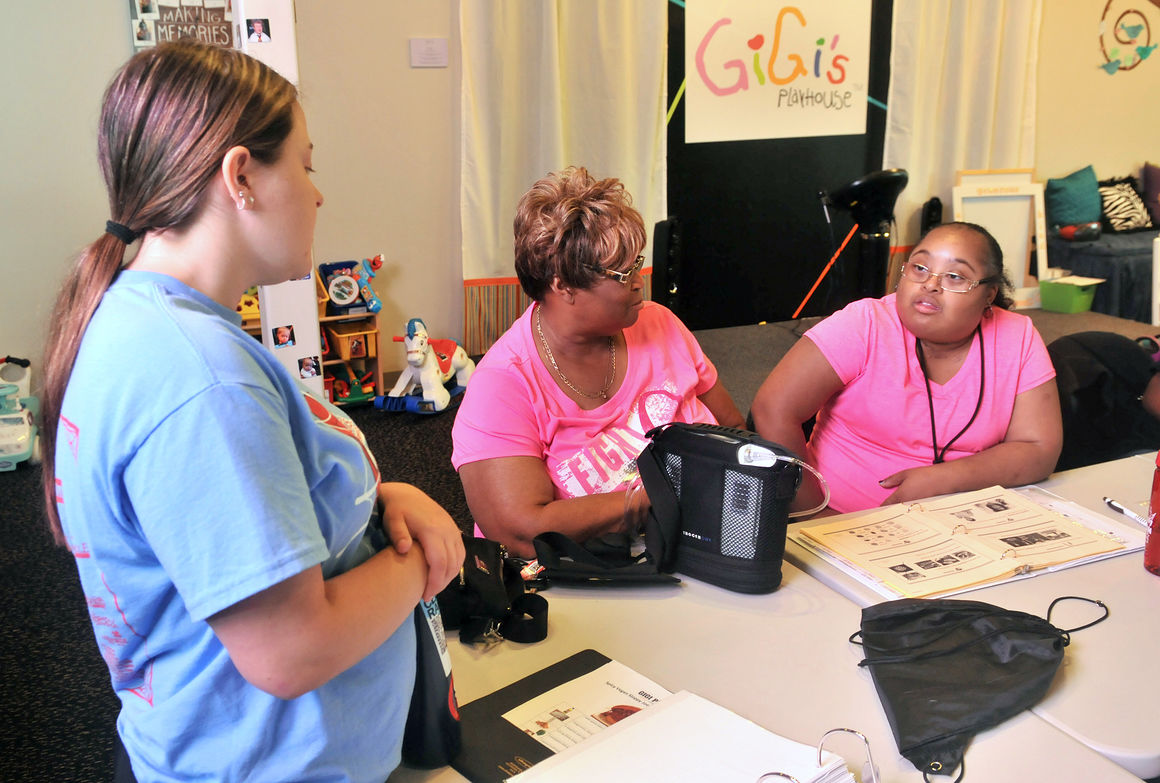 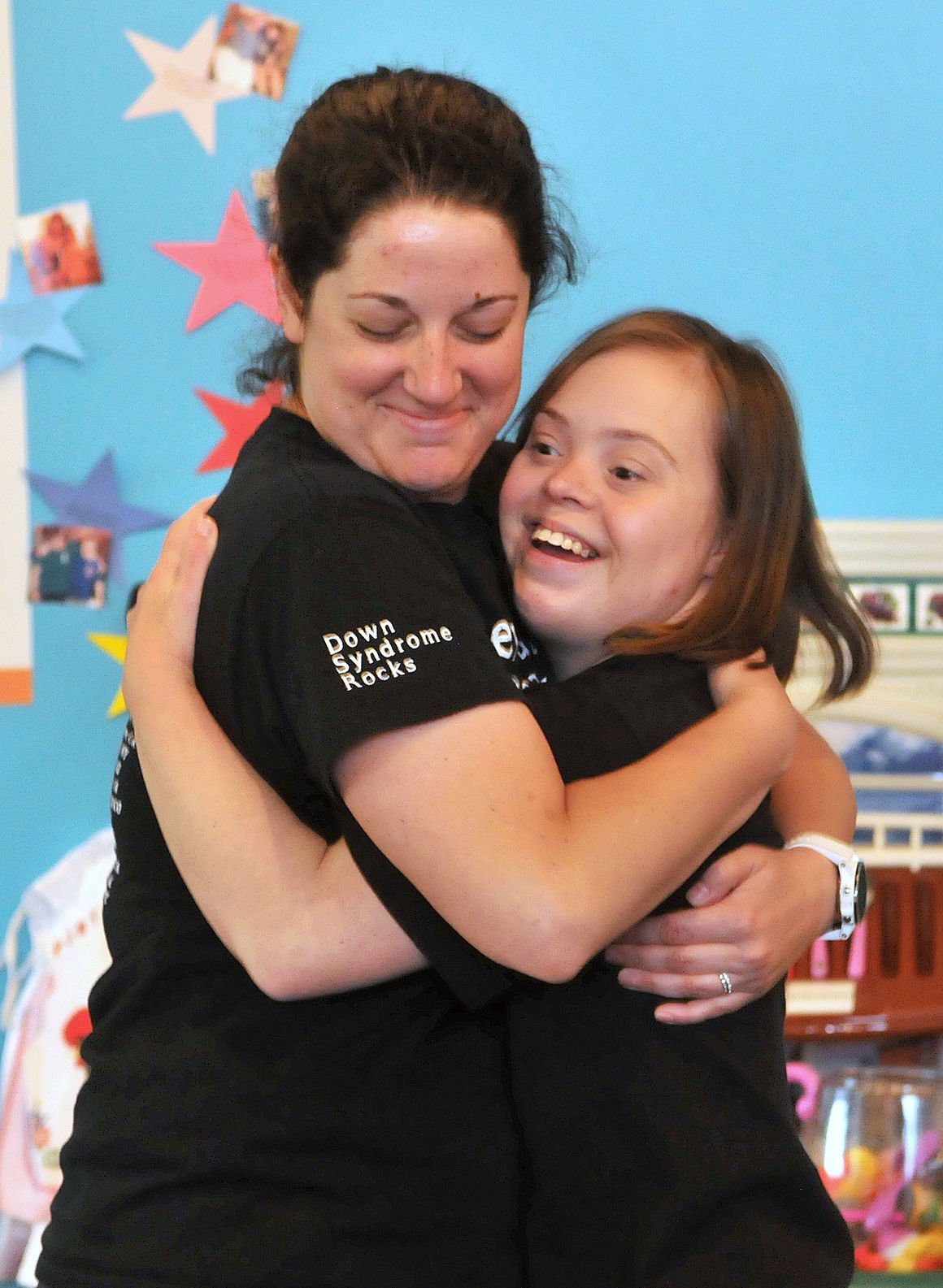 Jen Parsons, Program Manager at GiGi's Playhouse in Moline receives a hug from participant Rachel R. as she learns about healthy foods during GiGi's Prep program on Wednesday.

MOLINE — Independence and self-sufficiency partner with smiles and friendship during GiGi's Prep program at GiGi's Playhouse in Moline.

The six-week career-readiness program is designed to give participants with Down Syndrome the confidence and skills needed to live on their own and be successful in the workforce.

"They create goals every week in four areas: fitness, healthy eating, interests and communication," said Jen Parsons, program coordinator at GiGi's. "Creating that independence is so important. ... That's one of the biggest things we work on within this program."

After working out when they first came in Wednesday morning — which involved lunges and squats with kettle bells and free weights — program participants discussed communication and nutritious alternatives to unhealthy meals and snacks. Their talk was followed by lunch prepared by the whole group.

GiGi's Prep is one of many free programs provided at GiGi's Playhouse. It also offers speech and language therapy, math and literacy tutoring, and social gatherings where participants can get together to play board games or sing karaoke.

Currently, it doesn't have space for the Prep's succeeding program GiGi University. But site coordinator Pam Lynch said they hope to expand in the next few years, if funding and volunteers allow.

"Grants are very competitive in this area," she said. "But all of our other funding is from fundraisers and private donorships and sponsorships."

Ms. Parsons and Ms. Lynch are the only paid employees at GiGi's Playhouse. They partner with volunteers to help facilitate and run its programs and events.

GiGi's is a nationwide organization with 32 locations in the U.S. and one in Mexico. Its mission is to create a world where people accept Down Syndrome and provide free programming to families and to build global awareness and acceptance, according to Ms. Parsons.

"Their diagnosis is on their face so that doesn't ever go away; it's always going to be there," she said. "That's really tough for them, and a lot of bullying happens because of that. And we talk about that a lot here."

She said they want everyone to know people with Down Syndrome are no different from anyone else.

"They have different skills and abilities and personalities," said Ms. Lynch. "They accept us as we are, and that's what they want from us."

One of the greatest misconceptions, she said, is that people with Down Syndrome are always happy.

"They go through the same emotional ups and downs that we do. But they don't hold on to them as long as we do," she said. "They are much more forgiving and accepting."

Everyone at GiGi's calls each other "friend," and they work off the phrase "best of all," which they define as "a daily challenge to do a little better than you did the day before, and it is always celebrated."

For more details, to donate to or volunteer, visit gigisplayhouse.org/quadcities or call 309-762-7529.

'I would have died in my bed': Rock Island restaurant owner recalls COVID-19 experience

A Rock Island restaurant owner recalls his experience after testing positive for COVID-19.

The name of the Moline Police officer driving the squad car that struck and killed a boy riding his bike has been released.

More than 50 uniformed Rock Island police officers stood along the back and side walls of council chambers during Monday's meeting to protest recent comments made by Alderman Dylan Parker.

A Princeton man was arrested Wednesday for stealing almost $33,000 of property out of a motel room in Walcott. The property was stolen on Mar. 26 and returned on Apr. 7.

When more than 70 percent of Rock Island's sworn police force lined up this week in the City Council chambers —in uniform — they were making a point.

Two people were rescued from a condominium fire in Moline early Saturday morning.

Man charged in Mother's Day killing is a multi-platinum songwriter

Three killed including 1-year-old girl in I-80 crash

Three people died Thursday, including a 1-year-old girl, after the Ford Mustang in which they were riding crashed into the back of a semitractor- trailer that had slowed or stopped for traffic on Interstate 80, the Illinois State Police said in a news release issued Friday.

Details about the events leading up to the double-fatal boat crash on the Mississippi River at LeClaire last summer are being deemed "confidential," despite the recent filing of criminal charges.

Jen Parsons, Program Manager at GiGi's Playhouse in Moline receives a hug from participant Rachel R. as she learns about healthy foods during GiGi's Prep program on Wednesday.