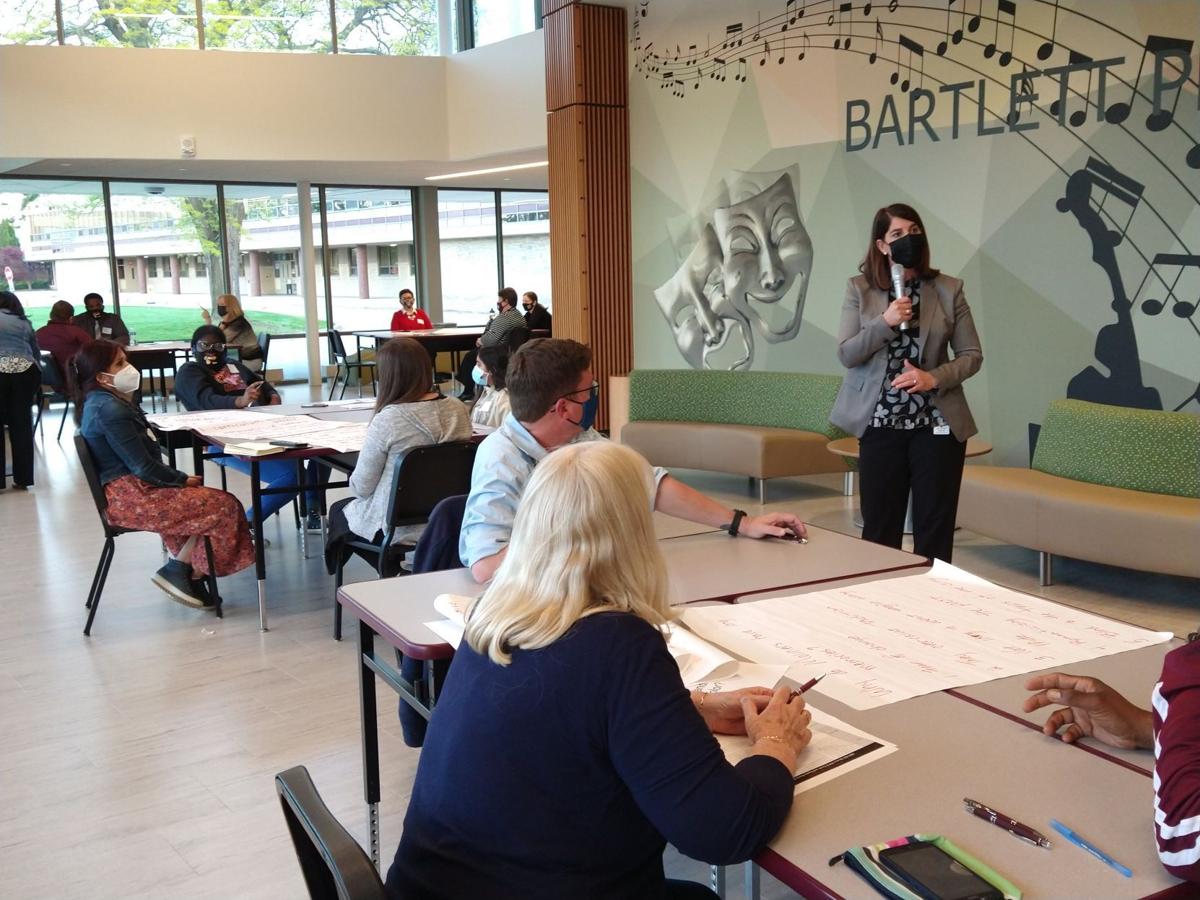 Superintendent Rachel Savage of the Moline-Coal Valley School District speaks with attendees Tuesday at the Bartlett Performing Arts Center during a special community conversation focused on equity, diversity and discrimination. 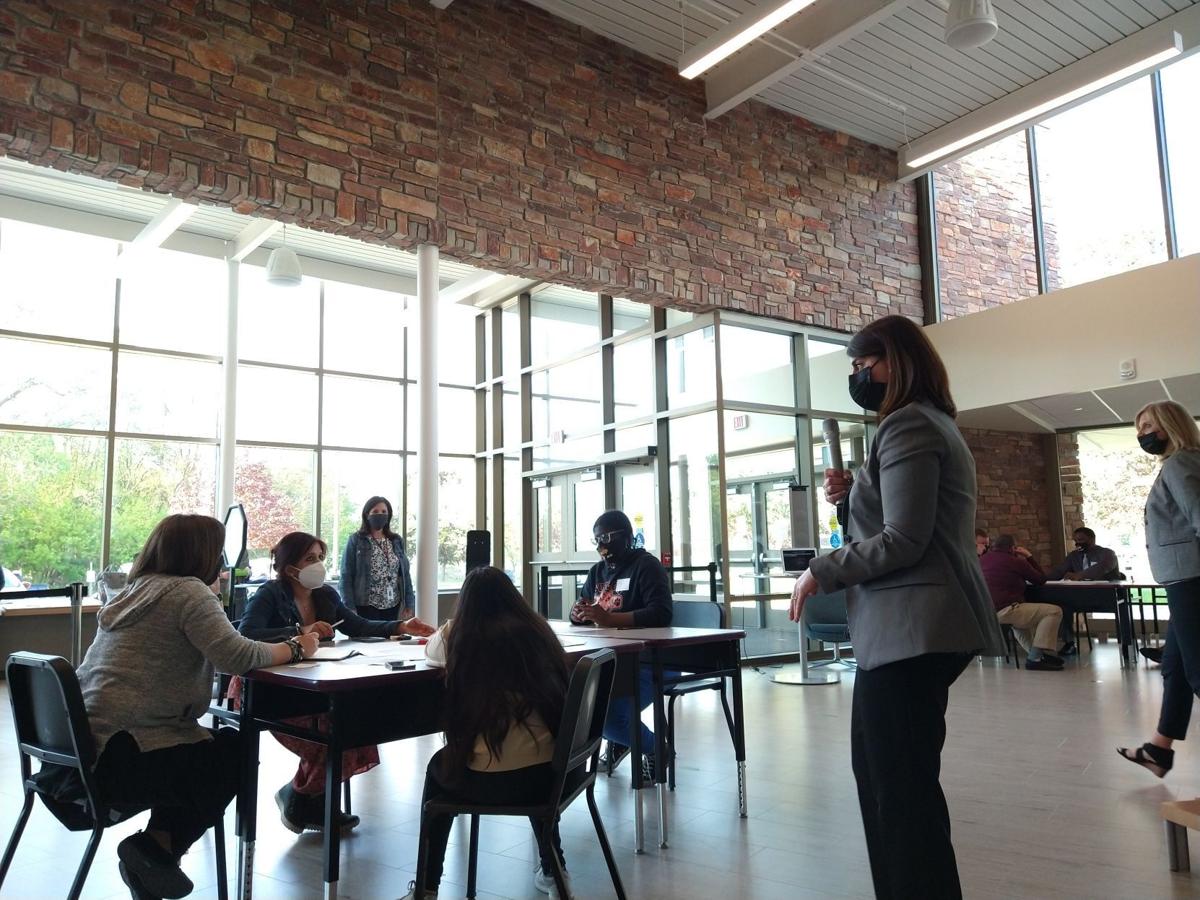 Moline-Coal Valley Superintendent Rachel Savage speaks with attendees of the special community conversation focused on diversity, equity and discrimination Tuesday, May 4, at the Bartlett Performing Arts Center in Moline. 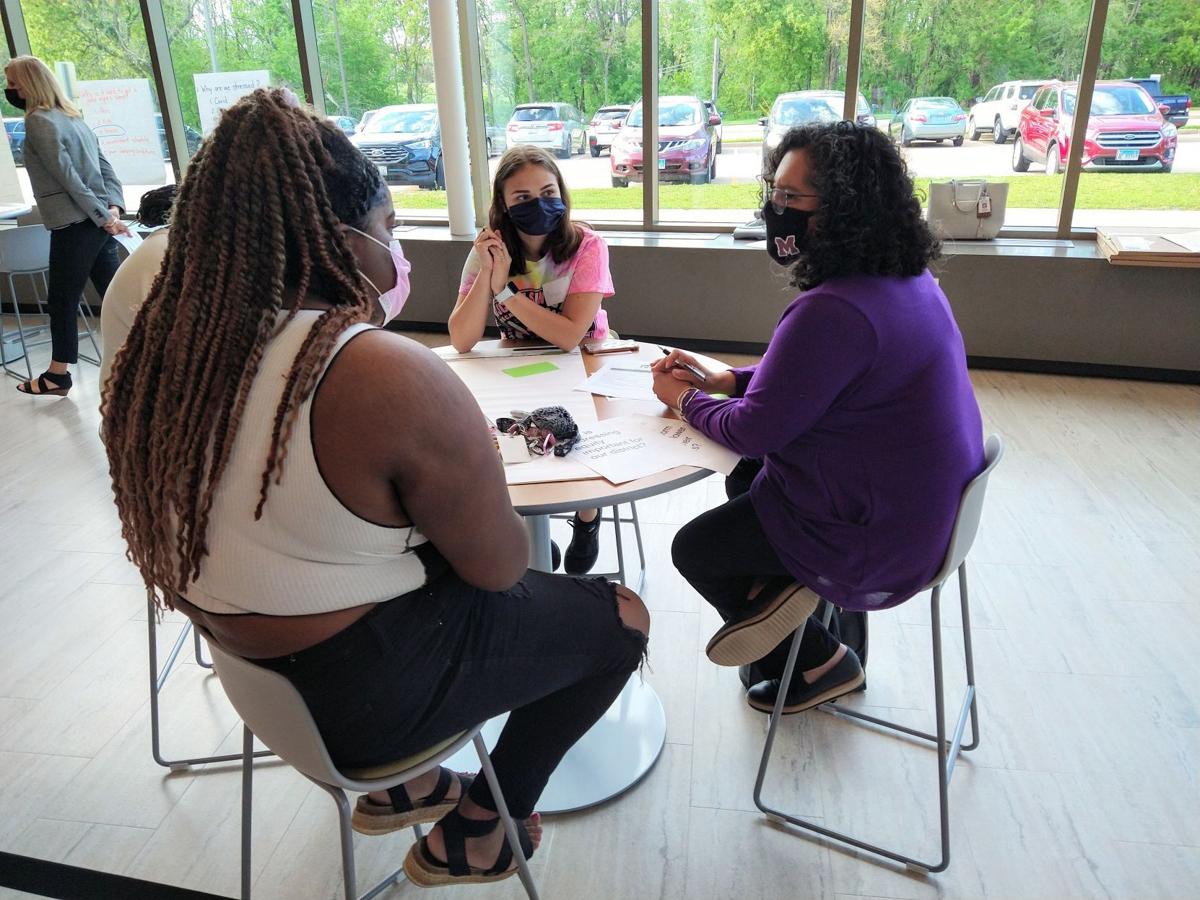 Superintendent Rachel Savage said she was “completely blown away” by the real conversations, ideas and solutions shared by attendees of Moline-Coal Valley’s community conversation Tuesday.

Attended by district administrators, school board members, city leaders, community members and students, Tuesday’s event was scheduled by the district in the wake of the fall-out following the viral video that shook the district about a month ago.

In the video, a Black sophomore football player was forced by teammates to sit among banana peels hung in a locker under threats of violence. The perceived racist actions in the video prompted a legal and school district investigation. While no legal actions were taken, players who participated in the video did face school and team disciplinary actions.

Savage said the district’s goal for the event was to listen and brainstorm with stakeholders to help the district face these issues of racial bias and discrimination head-on and to “capture the perspective” of attendees.

Individuals gathered in groups at seven tables to drill down deep into a variety of questions, including what prompted students to make the video, why some students of color perform lower than their peers and why it is difficult for the district to employ more people of color.

In accordance with state health guidelines, the district had planned to host up to 150 participants Tuesday, with individuals spreading out in the Bartlett Performing Arts Center auditorium, the PAC lobby and the high school cafeteria. Only about 40 individuals, including participants and district officials, were present.

School board member Kate Schaefer participated in one of the discussion groups and said she thought Tuesday’s event was a positive experience for those who took part.

“I think it went great,” Schaefer said. “I am disappointed in the turnout.”

Tuesday’s attendees were first invited by Leia Peterson, coordinator of special education services, to write down a time they had experienced racism, discrimination or bias. Participants were then asked to share with their group.

The primary work of the groups was to address the discussion topics on their tables and drill down in what Savage called a “five whys” approach. Each table group selected a topic and collaborated to write a list of five reasons why the problem existed. Then the group selected one of those five reasons to drill down further, and possibly did that a third time. Savage said that method helped groups to really examine an issue on multiple levels to understand the root causes. Groups were then asked to turn their attention to possible solutions.

Moline Mayor Sangeetha Rayapati joined a table of Moline High School students to address the question of why some students of color perform at rates lower than their peers. In the second round of the method, Rayapati’s group discussed why there is an assumed lack of motivation for some of those students.

The Rev. Melvin Grimes, senior pastor of Tabernacle Baptist Church in Moline, engaged in a separate table discussion and said Tuesday’s event marked a step in the right direction. He said what mattered most was that these efforts continued and resulted in real change.

“We need to keep talking and accept truths as they come to us,” he said. “... And go to the mat to change what needs to be changed.”

He said everyone, pastors included, must review biases and consider what changes they could make to hold themselves accountable for their words and actions. He said the district must continue this path, and not be talking about the same issues two to three years down the line.

Greg Aguilar, who was invited to participate as a member of Western Illinois University’s board of trustees, echoed Grimes’ sentiments. Aguilar said he applauded the students who engaged in discussions, but he also cautioned them.

“Be prepared to keep hearing these conversations for the next 60 years,” he said.

Aguilar said he was grateful for the community dialogue, but he issued that warning because he and members of his table group, which included Grimes, had experienced many years of talking about change and attempts to address racial issues, only to see the cycle begin again.

Aguilar applauded Darrick Reaves for being the only Moline High School football coach who attended the event, and he questioned why other coaches and the athletic director did not attend. He said he thought it was essential members from all sides show up to the table to do this work.

Aguilar urged the district to a hire a professional diversity, equity and inclusion team, build in accountability steps that would eliminate “slaps on the wrist,” and for coaches and teachers of the district to teach about bias.

He said he was hopeful for progress.

“I hope that it creates real change that opens up the dialog and realities of what a diverse student body faces every day.”

Student Kenia Wilson said she was thankful to have the opportunity to engage in hard discussions.

“I was kind of nervous when I walked in,” she said. “I didn’t want to just sugar coat it. We dug into it and got uncomfortable to get comfortable.”

Psaki on gasoline shortage: 'The end is in sight'

Psaki on gasoline shortage: 'The end is in sight'

Geneseo schools to focus on accuracy in grading

WHAT WE KNOW: Geneseo schools have been working on accuracy in grading for several years.

The Davenport Community School District board has approved the appointment of some members of the district’s new administrative cabinet.

Iowa is issuing food assistance to students who may have missed out on free or reduced-price lunches during the pandemic.

Learning to forage: Nahant Marsh gives an introduction to finding medicine and food in the outdoors

Finding fresh, free food can be as simple as visiting your yard

Wini Aboyure, who attends Davenport Central, has won the $20,000 Dooley Memorial Scholarship, an annual award given to a Davenport student who wants to become a medical doctor.

Special education students in the Rock Island-Milan School District are underperforming their peers in the state and students are not being served in the least-restrictive environment according to an audit.

Superintendent Rachel Savage of the Moline-Coal Valley School District speaks with attendees Tuesday at the Bartlett Performing Arts Center during a special community conversation focused on equity, diversity and discrimination.

Moline-Coal Valley Superintendent Rachel Savage speaks with attendees of the special community conversation focused on diversity, equity and discrimination Tuesday, May 4, at the Bartlett Performing Arts Center in Moline.