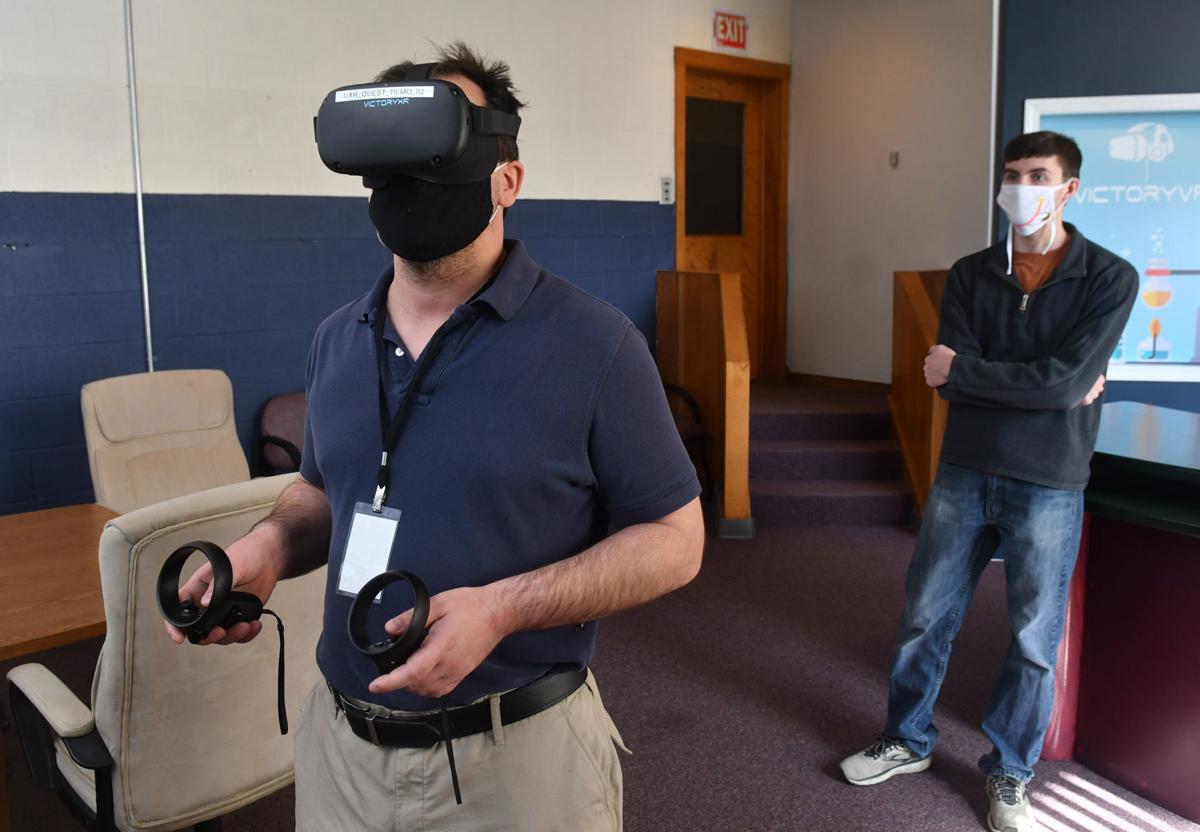 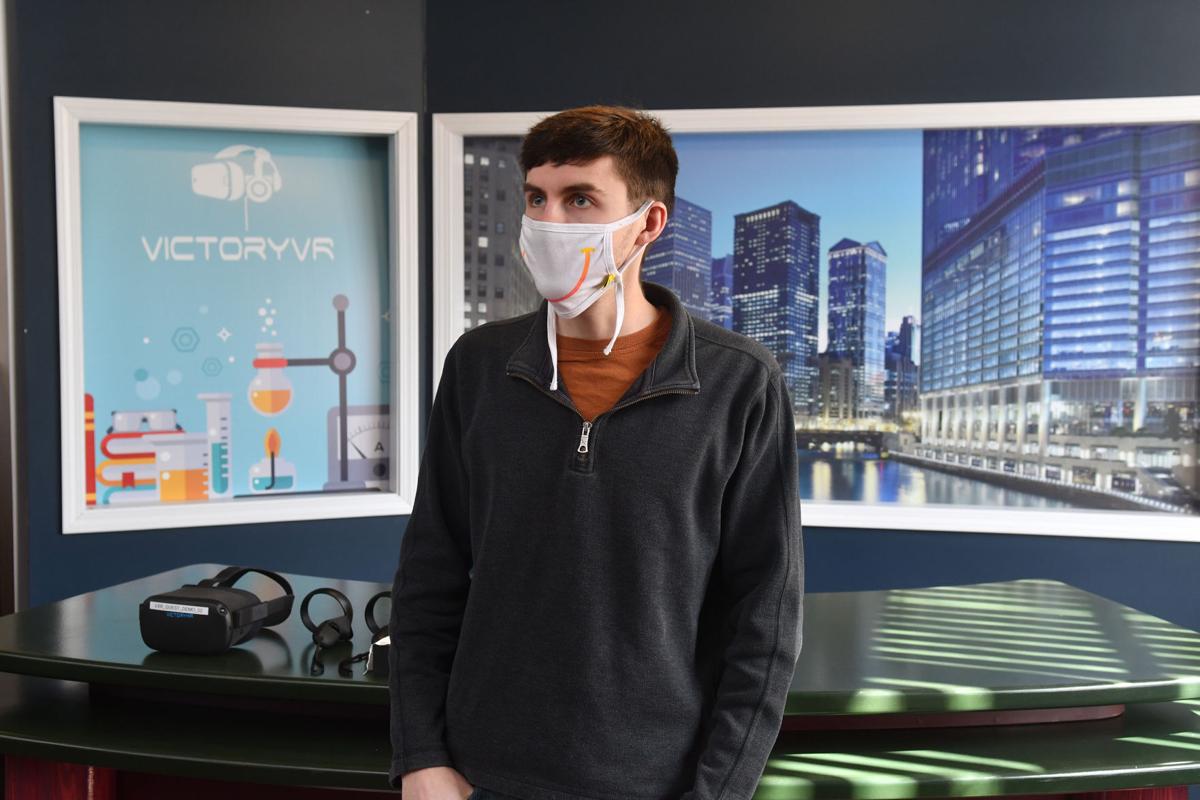 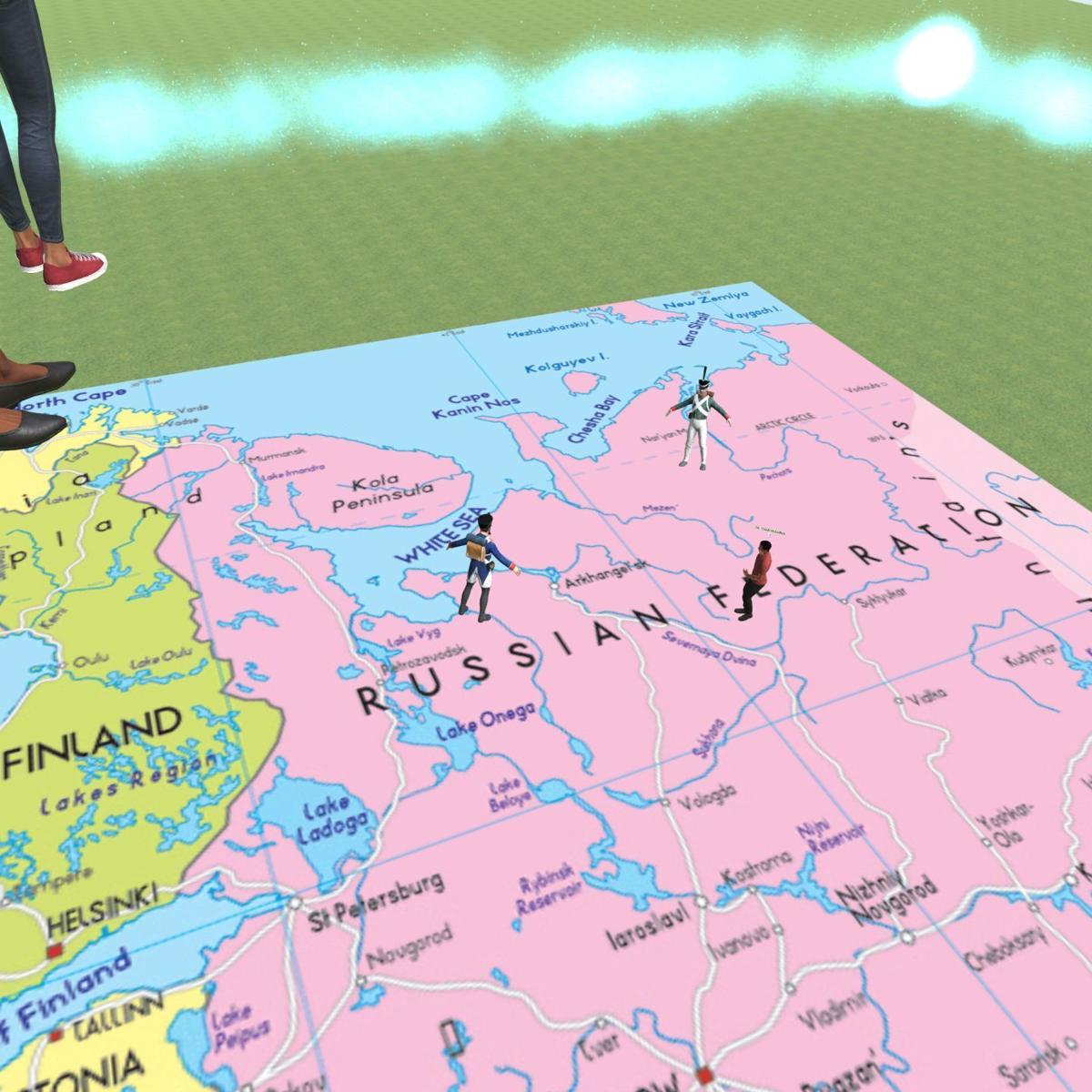 Ovell Hamilton, who teaches world history at Morehouse College, lectures on Napoleon's invasion of Russia in a virtual space while other participants observe from raised, see-through platforms.

The college is working with Davenport-based VictoryXR to offer courses in virtual reality. 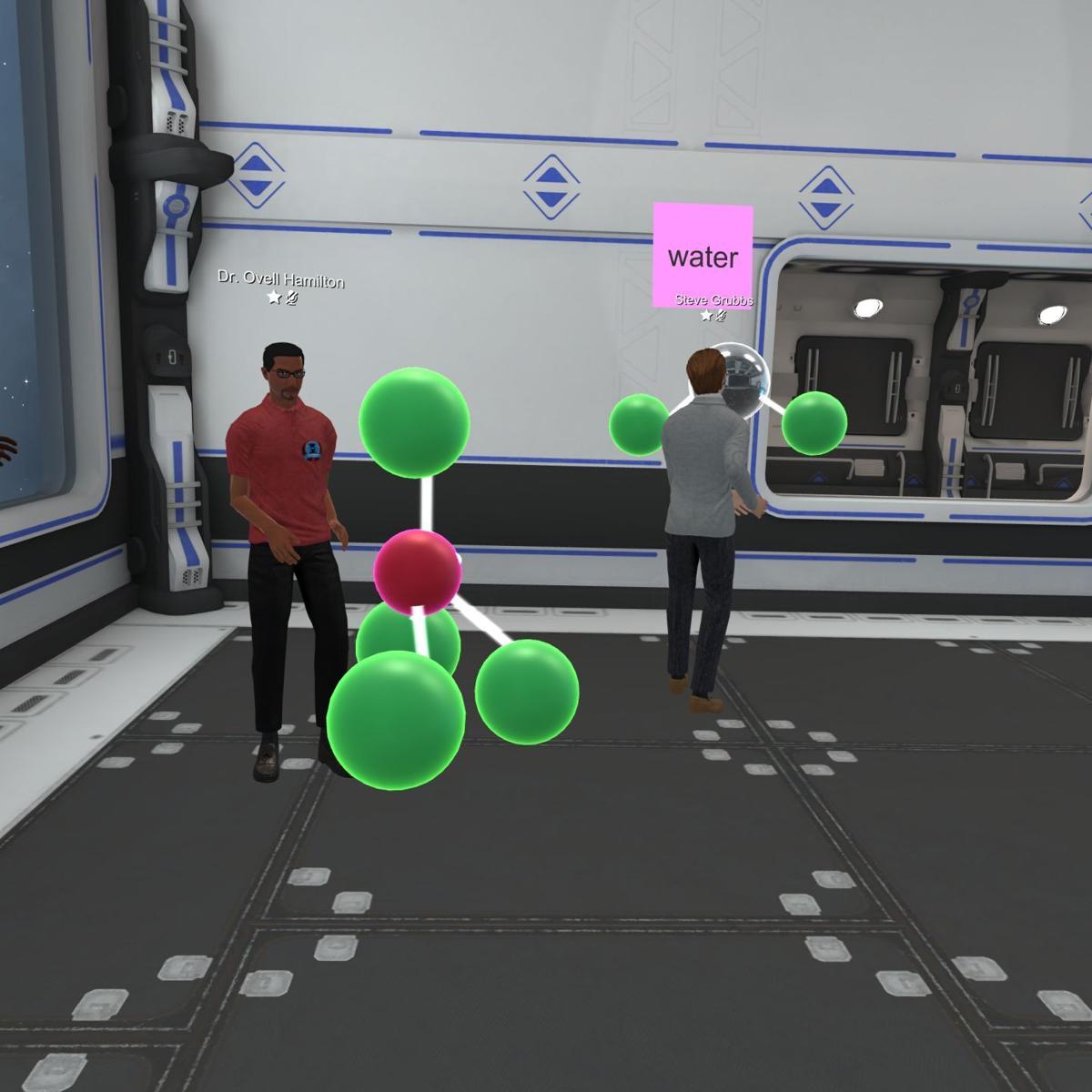 Steve Grubbs, the VictoryXR CEO, (right) and Ovell Hamilton, who teaches at Morehouse College, manipulate molecules in one of the virtual learning spaces designed by Victory Enterprises for the college, which is offering two fully virtual reality classes. 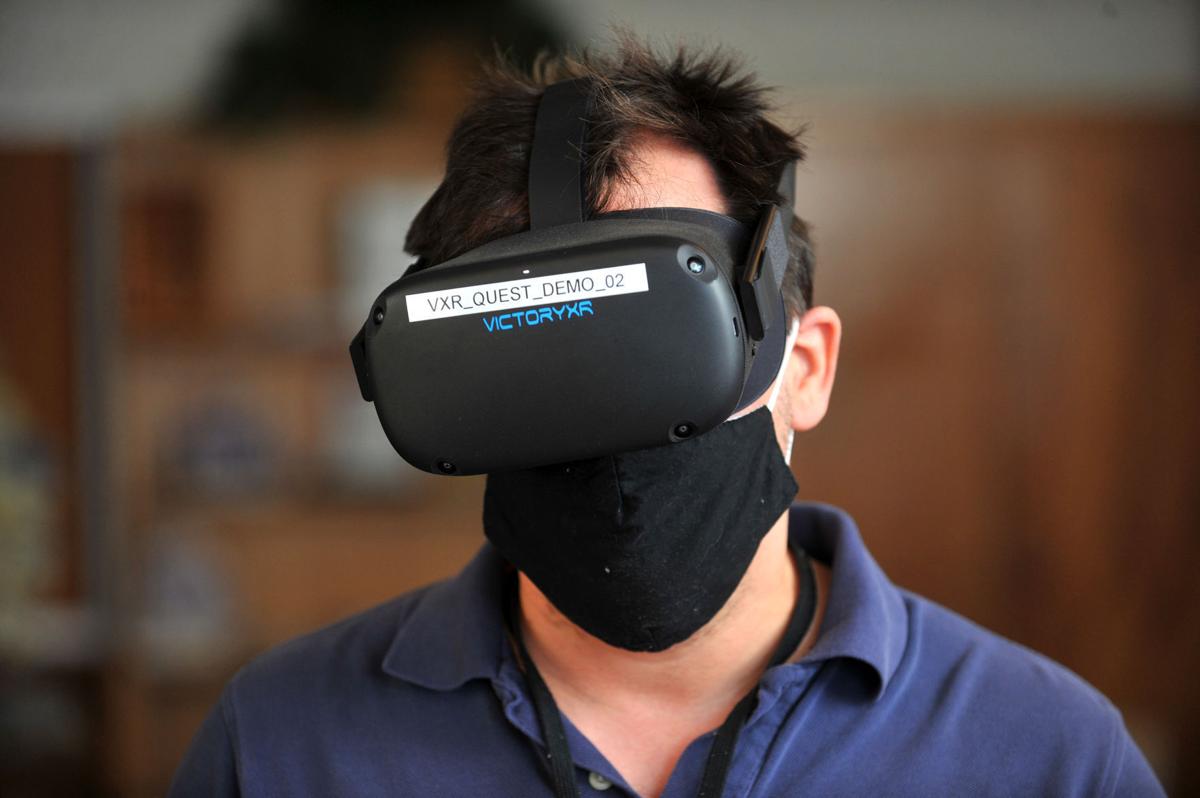 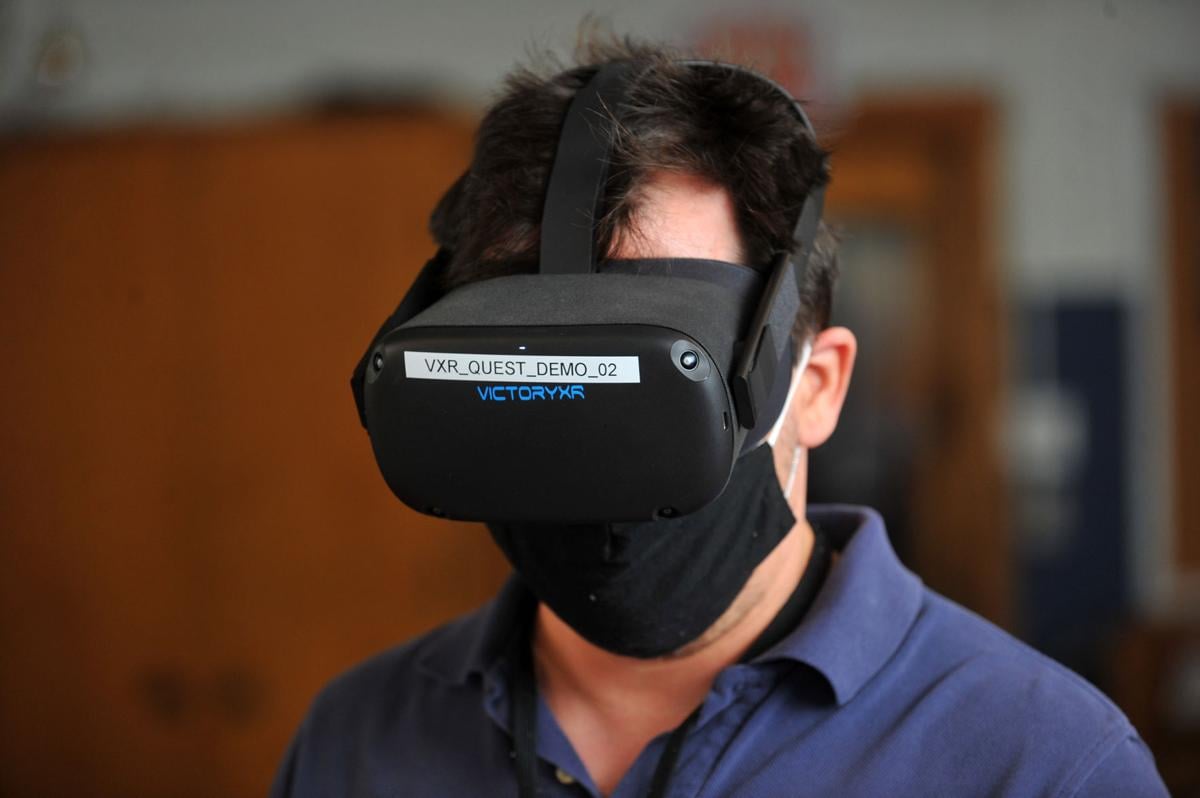 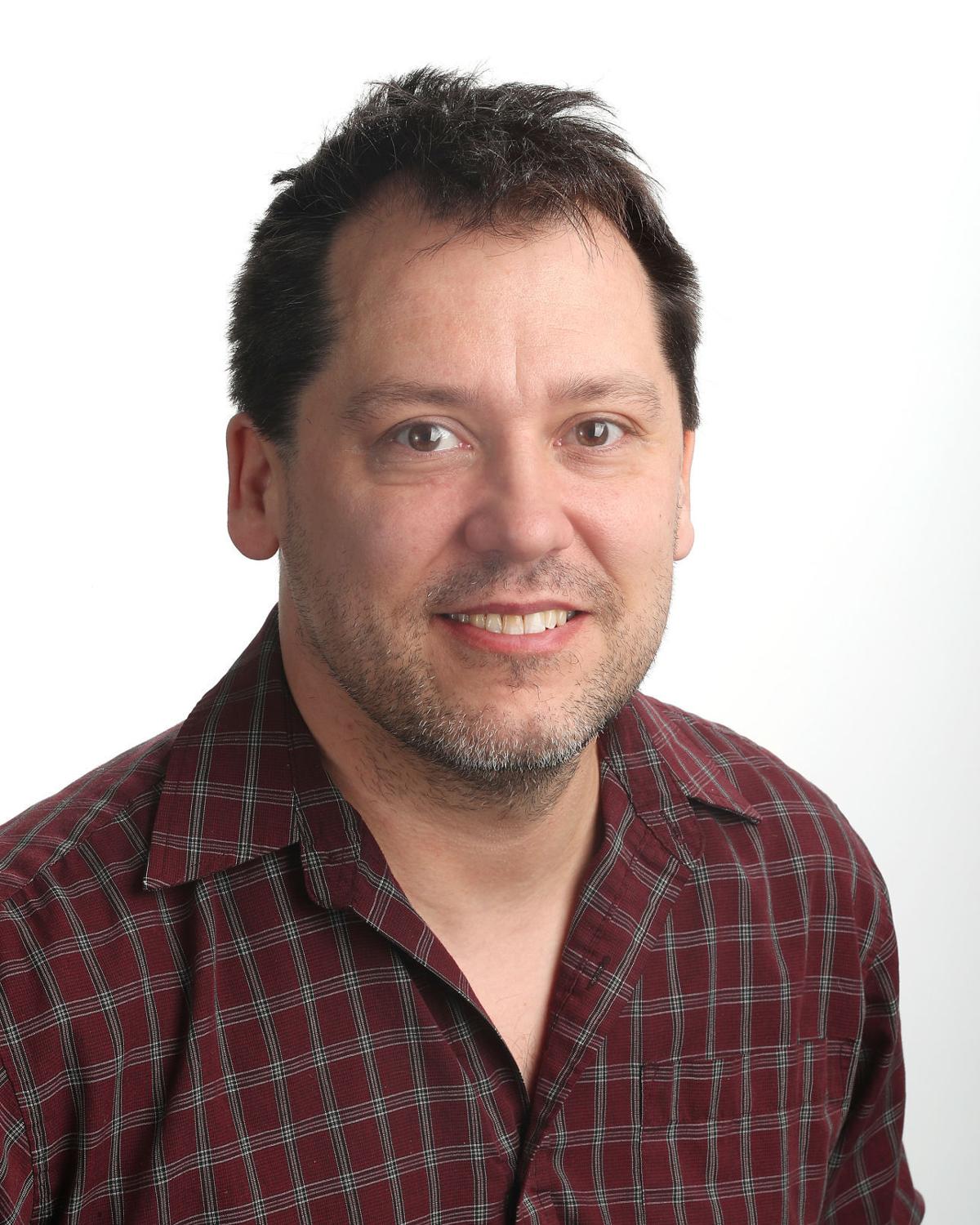 The volleyball-sized, pink human brain was a few yards away from me, floating above the lawn on the Morehouse College campus.

Then, after a couple of flicks of my fingers, it was on my right hand, lobes, wrinkles and all.

Once it was there, I was able to turn it so I could see its various structures and even expand it to take a closer look.

Around me other people did similar experiments with the pink heart, an old-fashioned steam train and a model of Sputnik — the satellite that was one of Russia’s earliest forays into space.

Morehouse College is in Georgia. I was not. If anyone is worried, neither were the floating, oversized human brain or heart.

I was in VictoryXR’s Davenport office, wearing a virtual reality headset, experiencing the virtual campus the company has developed for the college in partnership with Qualcomm Technologies. That virtual campus includes classrooms where a handful of Morehouse’s classes are being taught remotely this semester.

For students weary of Zoom meetings, the immersive virtual reality instruction gives them a different way to interact with each other, their instructors and class materials, according to a media packet about the program issued by Victory.

“Providing an immersive classroom experience for our students during this pandemic is important and Morehouse College is pleased to lead the way,” Kendrick Brown, provost of Morehouse, said in a news release.

The college is using a hybrid model — a mix of online and in-person instruction — because of the COVID-19 pandemic, according to its website.

The students participating in the program have been given VR equipment through a donation from Qualcomm, the release states. The sets use technology developed by the company.

The tour, held Friday, flitted us — my avatar, and those of several other people — through a number of virtual learning areas: a traditional classroom, a lecture hall, a space station and a giant map of Europe set in an open field of grass.

On the European map, we were joined by life-sized models of Napoleonic soldiers — blue-jacketed French, and Russians in green — complete with shakos and muskets. Above, the two-dimensional map hovered clear platforms with glowing outlines on the edges.

Ovell Hamilton, who teaches world history at Morehouse, encouraged us to shift to the platforms above the map, and I did so. The switch in perspectives was a little like a movie changing scenes, and there was an immediate sensation of height as I found myself with a bird’s eye view of Hamilton’s avatar standing on Russia.

Once we were all on the platform, Hamilton used the map, the soldiers and other props to give us a quick walk-through of Napoleon’s invasion of Russia and the Russians’ response.

An advantage of virtual reality for teaching his subject is being able to make the instruction a little more lively, he said during the demonstration.

“Now history’s exciting again, not boring,” he said, after causing part of the map to burst into flames to illustrate the Russian scorched-earth strategy.

At another point in the tour, we were drifting in space in blank-visored, white space suits while colored globes darted about above us, bright in the black.

In the center was a nucleus of protons and neutrons, more or less docile, while bright blue electrons flitted about like kindergartners on a playground.

“This is a unique way to begin the discussion of what radioactive particles look like in space,” Muhsinah Morris, who teaches advanced inorganic chemistry for Morehouse, said.

Morris also showed us a room in which students could manipulate models of atoms and assemble molecules as an exercise.

Ethell Vereen, who teaches men’s health at Morehouse, said the interactive virtual models were a useful tool for teaching his students about men’s health. He can take them on tours of organs or whole systems within the human body to illustrate the processes that happen within them.

“We can actually go on a field trip inside of a heart,” Vereen said.

He has also created a virtual barbershop as a space where his students can informally discuss health topics.

“Here in this space we can have those conversations our students might have in an actual barbershop,” he said.

Watch Now: Davenport council discusses use of officers in schools

The Metropolitan Quad-Cities’ school districts have said COVID-19 vaccinations for employees who wanted them should be complete soon.

Davenport school board gets update on crisis response/violence prevention plan

Students will be able to participate in the Davenport Community School District’s new plan for dealing with crisis and violence, according to an update on the plan’s implementation presented Monday.

Iowa Gov. Kim Reynolds previously signed into law a bill requiring school districts to provide full-time in-class learning to parents who request it. The mandate goes into effect on Feb. 15.

Ovell Hamilton, who teaches world history at Morehouse College, lectures on Napoleon's invasion of Russia in a virtual space while other participants observe from raised, see-through platforms.

The college is working with Davenport-based VictoryXR to offer courses in virtual reality.

Steve Grubbs, the VictoryXR CEO, (right) and Ovell Hamilton, who teaches at Morehouse College, manipulate molecules in one of the virtual learning spaces designed by Victory Enterprises for the college, which is offering two fully virtual reality classes.