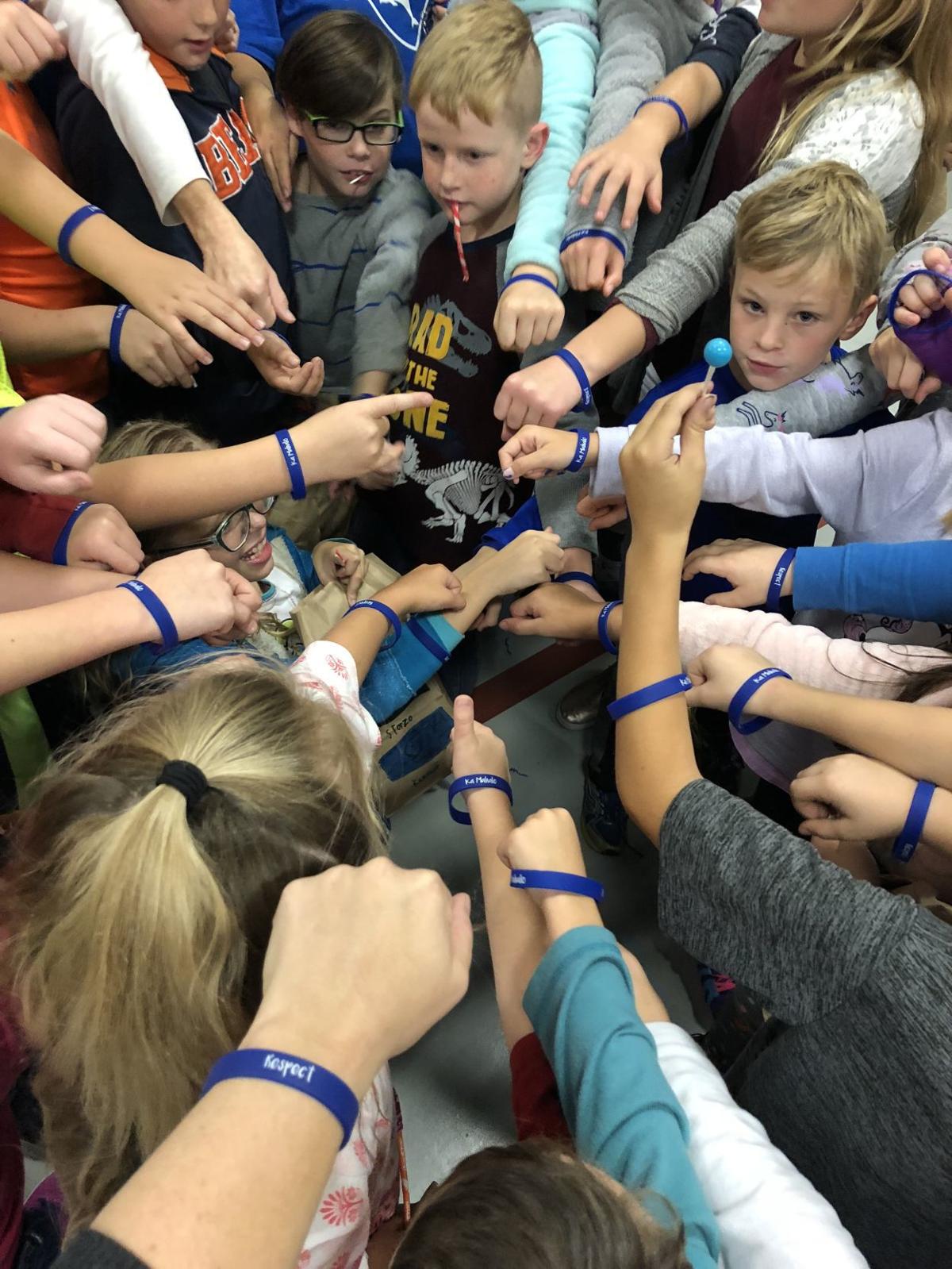 Cambridge grade-school students in the Ka Mahalo House join together in a huddle after the house sorting ceremony in October. The school has adopted a system for encouraging achievement in academics and character education, with staff and students in kindergarten through fifth grade divided into multi-grade houses. 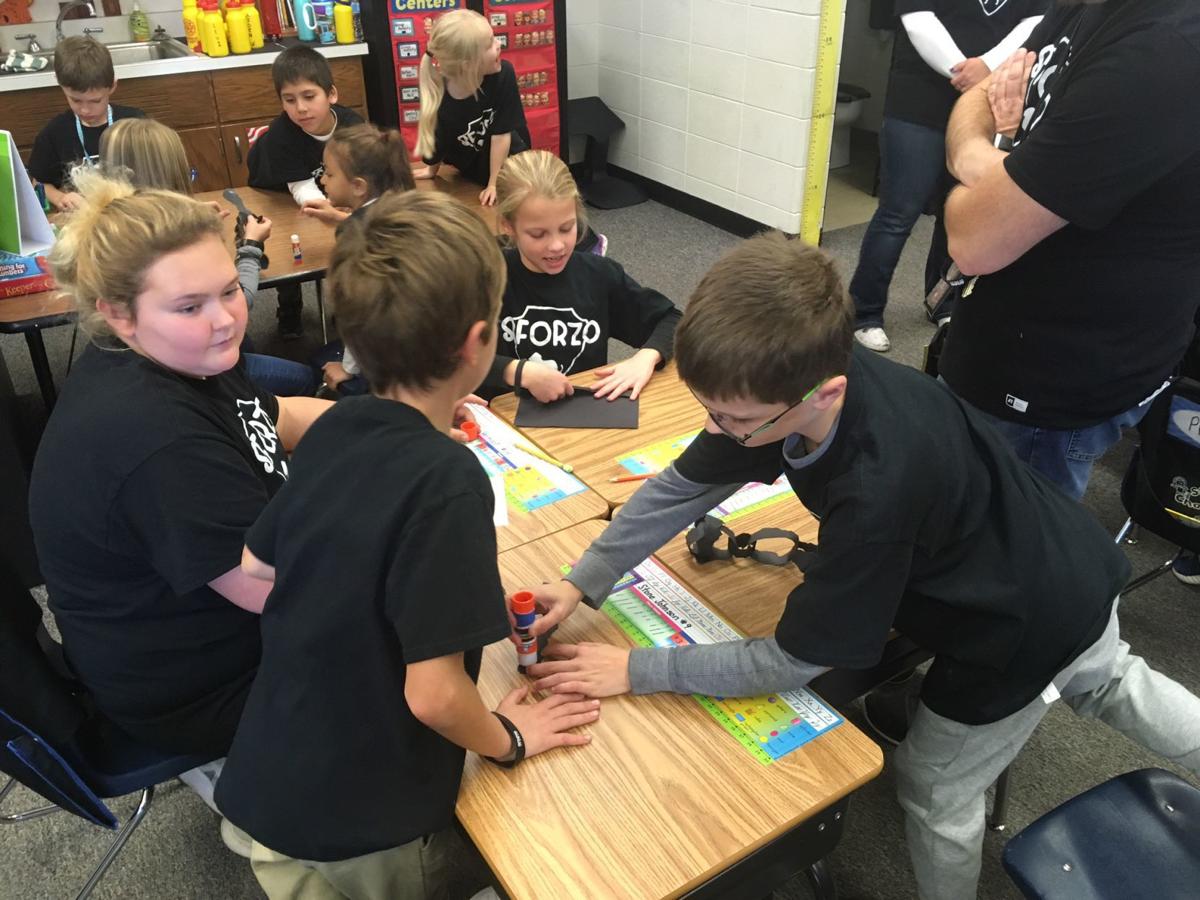 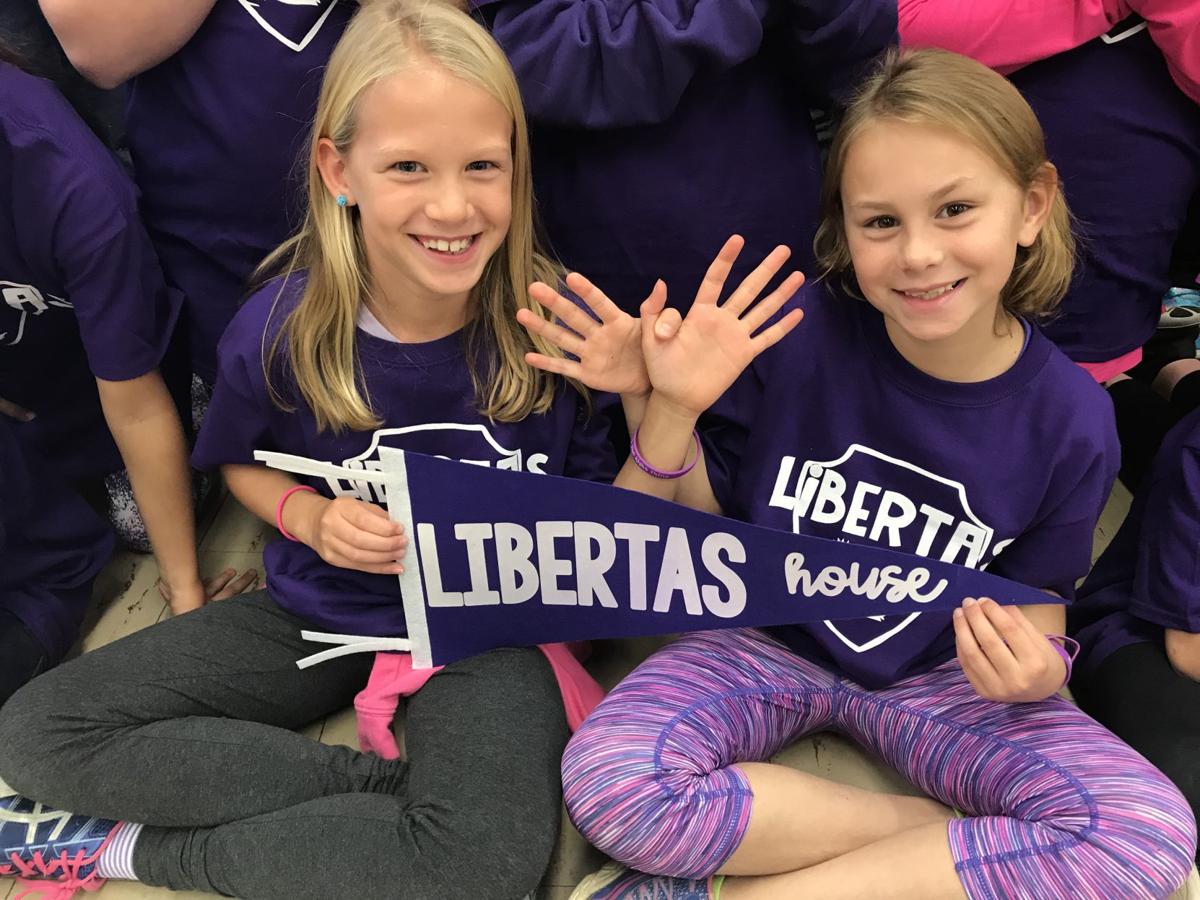 CAMBRIDGE — Cambridge students aren't identified as much by their grades as their "House."

The school is using the Krenari system developed by an Atlanta educator to challenge students academically and in character traits, using cross-grade "houses" reminiscent of a Greek system and Harry Potter's Hogwarts school.

Heather Pine, the Cambridge teacher who brought the idea back from an education conference in Atlanta, said the originator of the concept developed the approach from Harry Potter.

In 2015, Pine attended the Ron Clark Academy at an Atlanta middle school and learned the Krenari system promotes "pride” — "positive attitude," 'respect," "in control," "do the right thing" and "effort."

“It's one thing I immediately knew I wanted to bring back to Cambridge” from the conference, Pine said. “Walking in the school and feeling the passionate culture and climate was hard to explain.”

Pine said students at the Atlanta school came from diverse economic backgrounds but saw their school as a safe place. That culture applies in Cambridge, too, she said.

"We want them (students) to know they're safe and that they are loved," she said.

Cambridge teachers met with a group of Galesburg teachers who had adopted the Krenari system. All kindergarten through fifth-grade students — as well as school staff from administrators to cooks — belong to a particular house.

Participants earn points based on positive character education and academic performance. Each of the five Krenari "houses" at Cambridge is based on a different language; each has its own color and animal.

• The Drakan House, which is Armenian, means "positivity." Its color is red, and its animal is a hawk.

• The Ka Mahalo House, from Hawaii, means "respect." Its color is blue, and its animal is a dolphin.

• The Kawalan House, from Malaysia, means “in control.” Its color is orange, and its animal is a peacock.

• The Libertas House is Latin for "integrity." Its color is purple, and its animal is an eagle.

• The Sforzo House, from Italy, means "strength"or "effort." Its color is black, and its animal is a lion.

Points are awarded weekly, with a traveling trophy each week going to whichever house has earned the most points. The school lobby includes a display with house flags, the traveling trophy and boxes holding the points.

Points are tallied every nine weeks, with the House Cup for the year to be awarded in May. Pine said the major prize still was in the planning stages.

Grade-school students began the school year by learning about one house each week. In mid-October, first- through fifth-grade students were “sorted” into houses, Pine said, explaining to students they would be part of a new school family. Kindergarten house assignments were made Dec. 20 to ensure they understood the aspect, Pine said.

The school had a ceremony where students chose at random a bag with a bracelet and confetti reflecting house colors. Amid music, students ran through a balloon arch featuring their colors.

"We really wanted it to be exciting for the kids,” Pine said.

As in Hogwarts, the students will remain in the same house for the rest of their grade-school years. Each house has competitions where students earn points; in January they honored members of the community's police, fire and ambulance squads and invited them to lunch. The students also held a two-day coin drive that raised $420 for a children's hospital.

In November, each student was given a piece of paper and a glue stick. Students from different grades in each house were challenged to make the longest chain.

"You could be friends with people in the lower grades,” he said.

The houses also can earn treats or special privileges, perhaps as simple as flexible seating for a movie in the gym for the winning house. Students can give tickets worth one point each to staff members.

Pine said the students didn't typically think about awarding tickets themselves. When a student recently told her a teacher helped him when he was choking, she reminded him that might be worthy of a ticket.

She said response had been positive from staff members, school board members, parents and students.

She said she was seeing a connection between kindergartners and older students.

"Some of our fifth-graders hang out or read to them," Pine said. "They have like a buddy system they call it, and I've definitely noticed a shift in the school culture as well, just more positive. They are always looking to earn a point in some way or another."

Principal Shelly Capps said students in her house had a hand signal when they saw her in the hall.

“It's just a little connection that you make,” Capps said. “I think it's been very beneficial to the kids because they get to work with the kids in kindergarten through fifth grade, so they form good relationships at the lower end and the upper end.

"This is just the beginning," Capps said. "And now, to take them through the years, it'll be fun to watch.”

They are kneeling because they see a hurt in American society they want healed.

The Sherrard schools superintendent has contracted COVID-19, though the district has reported no student cases.

“There’s no way you can social distance a dance," said one principal.

Students will be returning to in-person learning at North Scott High School on Monday after COVID-19 had them learning online for a week.

The Royal River King and Queen Marching Band of Clinton High School performs music by the group Queen during halftime of the Central DeWitt at Clinton football game Friday, Sept. 25, 2020, at Coan Field in Clinton.

Augustana College is urging its community to remain vigilant as classes continue under COVID-19’s cloud.

WHAT WE KNOW: The Orion school district went to alternate attendance days on Mondays, Wednesdays and Fridays this school year with Tuesdays and Thursdays reserved for deep cleaning.

The students of North Scott High School have returned to its halls after a week learning at home because of COVID-19.

Cambridge grade-school students in the Ka Mahalo House join together in a huddle after the house sorting ceremony in October. The school has adopted a system for encouraging achievement in academics and character education, with staff and students in kindergarten through fifth grade divided into multi-grade houses.