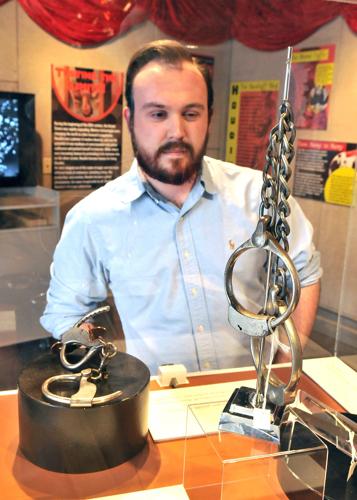 Kyle Dickson, assistant director at the German American Heritage Center in Davenport, looks over a set of Houdini's shackles used by the magician and on loan from the Sidney H. Radner Collection, History Museum at the Castle, Appleton, Wis. 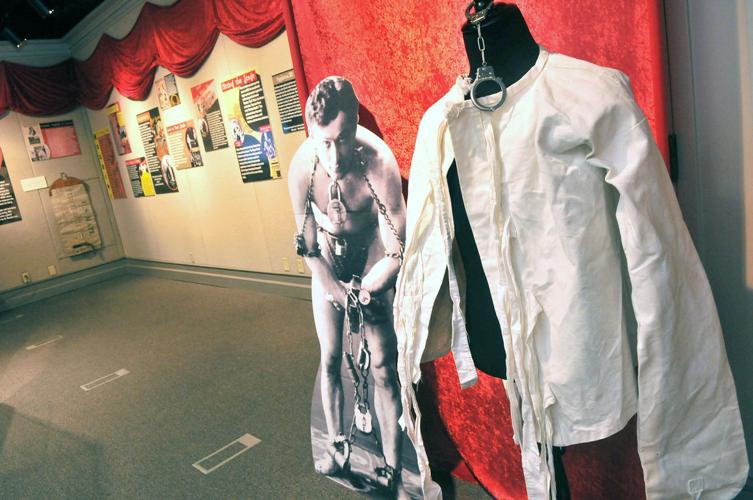 The German American Heritage Center in Davenport has on display photos and items used by magician Harry Houdini himself. A straitjacket and life-size posters are also on display.

DAVENPORT — There's no escaping the fact that Harry Houdini led a fascinating life. You can learn more about the Hungarian immigrant who was a magician and escape artist in a new exhibit at the German American Heritage Center.

Born Ehrich Weisz in Budapest in 1874, the future Harry Houdini had plenty of German background, including a German mother and a childhood spent in the German-dominated town of Appleton, Wis., where his father was rabbi to a German congregation, GAHC assistant director Kyle Dickson said recently. The family moved to Milwaukee when Ehrich was 8.

The Davenport exhibit — “Houdini: The Magic and Mystery” — will be on display through Nov. 4 on the first floor of the GAHC, 712 W. 2nd St. It was primarily compiled by Mr. Dickson, a Galesburg native who joined the GAHC staff last August, and intern Michael McMahon.

"His influences comprised mostly German sources; his immigrant story is a great one," Mr. Dickson said of Mr. Houdini, who took his last name from a French magician he admired — Jean Eugene Robert-Houdin (1805-1871) — and his first name from an Americanized version of his own nickname Ehrie, as well as another mentor, German-born magician Harry Kellar (1849-1922).

The exhibit shows how he transformed into the person we now know as "the great Harry Houdini." Influences ranging from his mother to Sir Arthur Conan Doyle, creator of Sherlock Holmes, shaped the Houdini myth, Mr. Dickson said.

The exhibit includes historic photos, advertisements, videos, the only known recording of Mr. Houdini's voice (from 1914), and actual artifacts used by the magician, including a file, handcuffs and shackles on loan from a museum in Appleton.

"There's so much more, so many cool stories people don't know," Mr. Dickson said. One interactive part of the exhibit is a straitjacket visitors can put on, borrowed from Augustana College's theater department.

"He started off as a no-name guy" who did card tricks with his brother, Mr. Dickson said. What first made Mr. Houdini famous was a "metamorphosis" trick, which he did with his wife, Bess, he said. She was tied up, put in a bag, and locked in a trunk. Mr. Houdini would stand on the trunk, hold a curtain, clap three times, and they would instantly switch places.

What made him more famous were handcuff escapes. Mr. Houdini challenged audiences to lock him in anything — shackles, trunks, and coffins, and more, Mr. Dickson said.

The exhibit includes video footage of his escapes, including one escape from a straitjacket while hanging upside down.

"A lot of people know how he did it, but he was an amazing showman," Mr. Dickson said. "He could get the crowd riled up. People were really into him. He would play with the crowd, really get them on the edge of their seats. He was a great marketer."

"A lot of his tricks, he could get out in seconds," he added. "He would play with the crowd, make them believe something went wrong. What's the fun if he just comes right out? He wanted people to believe something would happen, and then he'd come out at the last second."

Mr. Houdini was short, but muscular and "amazingly fit," Mr. Dickson said. "He was super agile, and could regurgitate keys — could swallow them and bring them back up."

"He was obsessed with water, and he knew how to play on people's fears," Mr. Dickson said. He'd bring a giant stopwatch and ask the crowd to hold its breath with him, to see how long they could hold it, he noted.

"People are going, 'Oh, my God, is this even possible?' A guy would run out with an ax, and people were terrified — Houdini's about to die," Mr. Dickson said. "The crowd would just go crazy; the orchestra would be playing; and as people were ready to storm the stage, he'd come out."

In his Chinese water torture stunt, he was shackled upside down in a filled water tank and locked in. Mr. Houdini was adamant that the stunt was not fake, and pledged to give $1,000 to anyone who could prove he could get air inside the tank, Mr. Dickson said.

What he thought was fake were mediums and fortune-tellers who claimed to communicate with the dead. His life changed after his mom died in 1913, and he had a horrible experience with a medium, the wife of Sir Arthur Conan Doyle, while trying to get in touch with his late mother, Mr. Dickson said.

"He felt almost betrayed; he called Doyle naive to believe those things," he said. "He didn't like to lie to people, to give people false hope."

Mr. Houdini was adamant that what he did was not magic. "He said, 'You just don't know how I actually do it.' He never claimed to be magic," Mr. Dickson said. Houdini wanted to ban mediums, testifying to that effect before Congress in 1926.

Before he died, he created a 10-word code, saying that a medium could prove his or her legitimacy by revealing the code after his death, Mr. Dickson said. his widow, Bess, tried for 10 years and never succeeded. Every Halloween, the anniversary of Mr. Houdini's 1926 death, magicians gather to re-create the seance. The GAHC exhibit includes a recording of the last seance of Bess to her late husband, which was broadcast nationwide in 1936.

On Oct. 22, 1926, a McGill University student in Montreal asked Mr. Houdini if he could withstand any blow to the abdomen, as the magician had proclaimed. The student punched Houdini four times in the stomach.

"He was always into challenges," Mr. Dickson said. Houdini did a show as planned that night, but developed a fever that reached 104, and he already had appendicitis. He died nine days later, on Halloween, at age 52.

The exhibit also highlights Mr. Houdini's innovations in early film and aviation. He created his own movie company, and he made several films between 1906 and 1923.

"He was a personality — on screen and off screen," Mr. Dickson said. "He just wanted to be famous." Mr. Houdini is considered to be the first pilot to fly over Australia, a feat he accomplished in 1910, he said.

Davenport is looking at a number of options for replacing Steve Ahrens, who managed leases, planned events, and was the face of the Davenport riverfront for 16 years.

One killed in fatal Davenport crash

While reading Madison Russo’s social media posts about having cancer and undertaking treatment, medical professionals noticed inaccuracies in the photos she posted of herself, according to a search warrant filed Wednesday by Eldridge Police in Scott County District Court.

An East Moline woman whose ex-boyfriend allegedly entered her apartment, struck her in the head with a loaded gun and held her captive was able to escape and call police after he fell asleep.

A Davenport man with felony convictions in Scott County for theft, burglary, drug possession and possessing a firearm as a felon has been sentenced to seven years in federal prison after he was caught with a firearm in Johnson County, Iowa, in 2020.

No fatalities are reported, but several people were treated for smoke inhalation at a Moline apartment fire.

A 40-year-old Thomson, Illinois, man has been sentenced to 29 years in the Illinois Department of Corrections after being convicted of sexually abusing an 18-year-old woman in May of 2022.

There were plenty of heroes who responded to the apartment fire Wednesday in Moline. Dave Qualls and Jordan Blake were two of them.

Kyle Dickson, assistant director at the German American Heritage Center in Davenport, looks over a set of Houdini's shackles used by the magician and on loan from the Sidney H. Radner Collection, History Museum at the Castle, Appleton, Wis.

The German American Heritage Center in Davenport has on display photos and items used by magician Harry Houdini himself. A straitjacket and life-size posters are also on display.