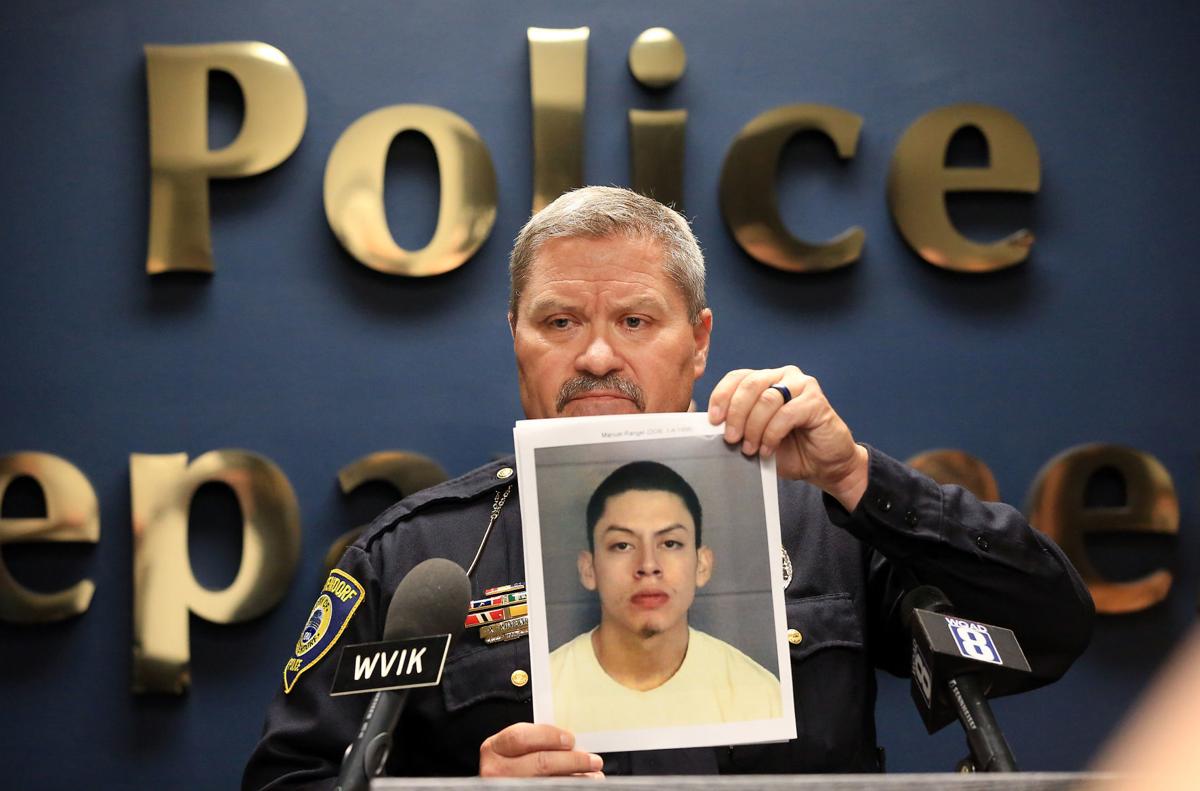 Bettendorf Police Chief Keith Kimball holds a picture of Manuel Rangel, 21, of Genoa, Ill., who was thought to have killed Brittany Wilson on Aug. 17 at the Big 10 Mart in Bettendorf. Rangel died of a self-inflicted gunshot wound on Aug. 18, after a short police pursuit in Nebraska according to Kimball during a media briefing at the Bettendorf Police Station on Tuesday. 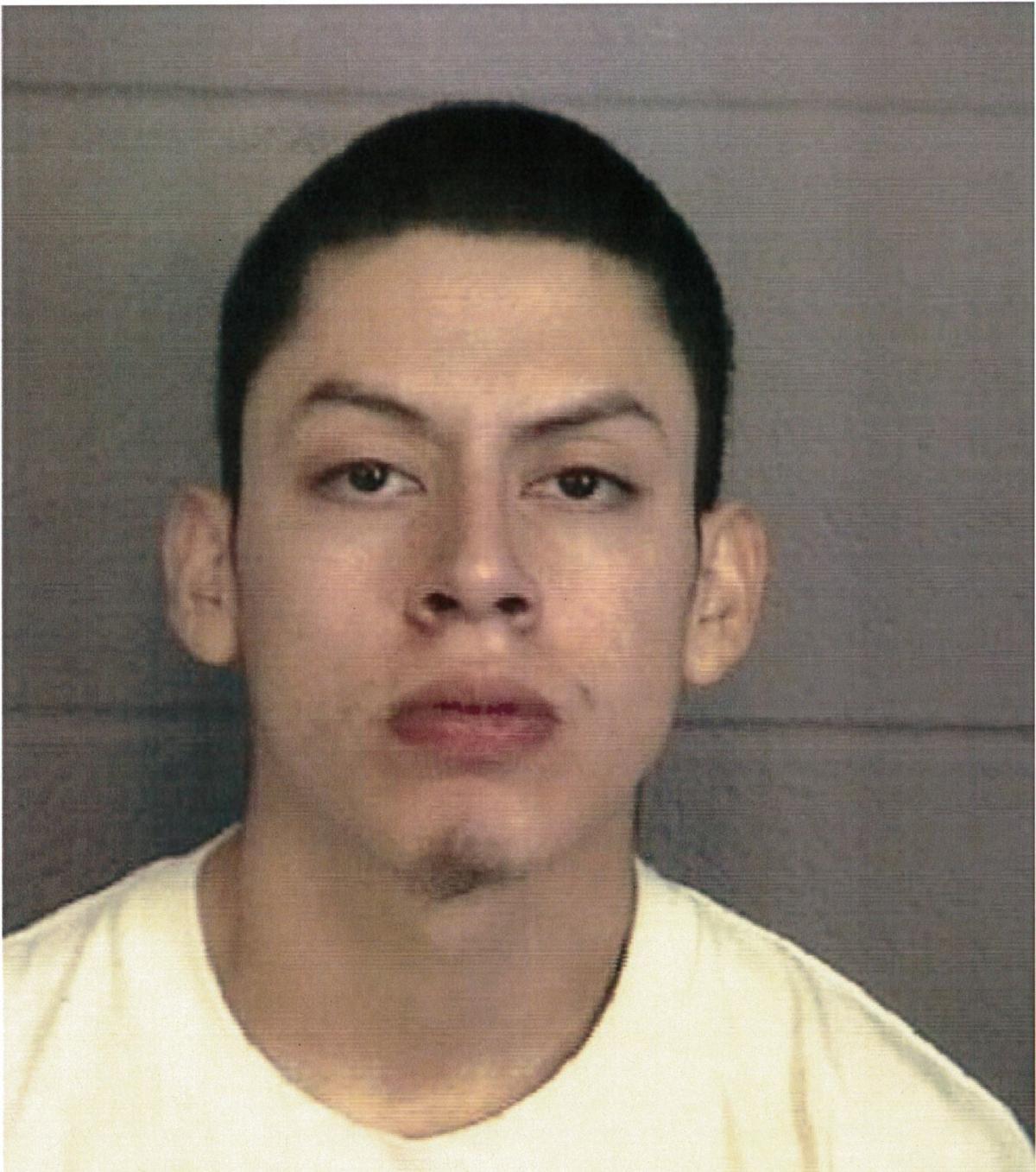 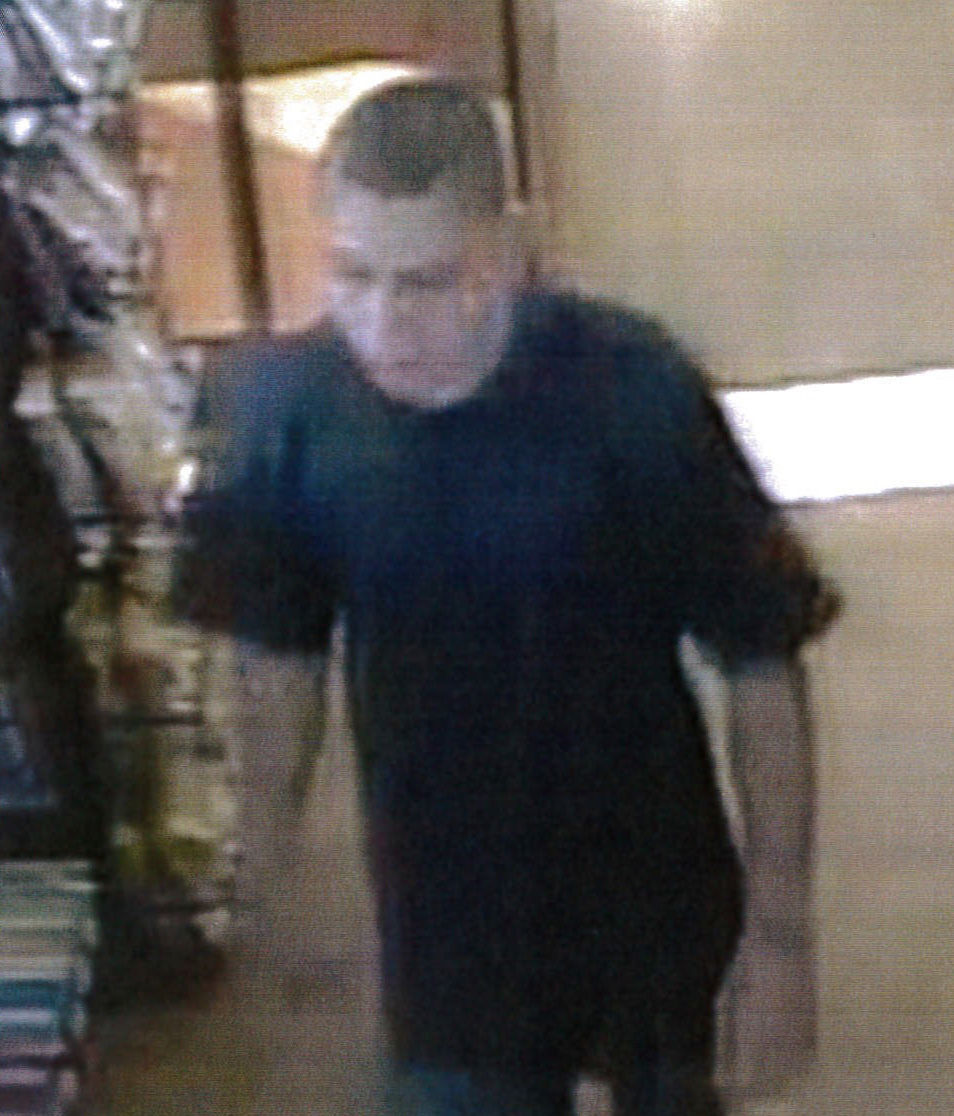 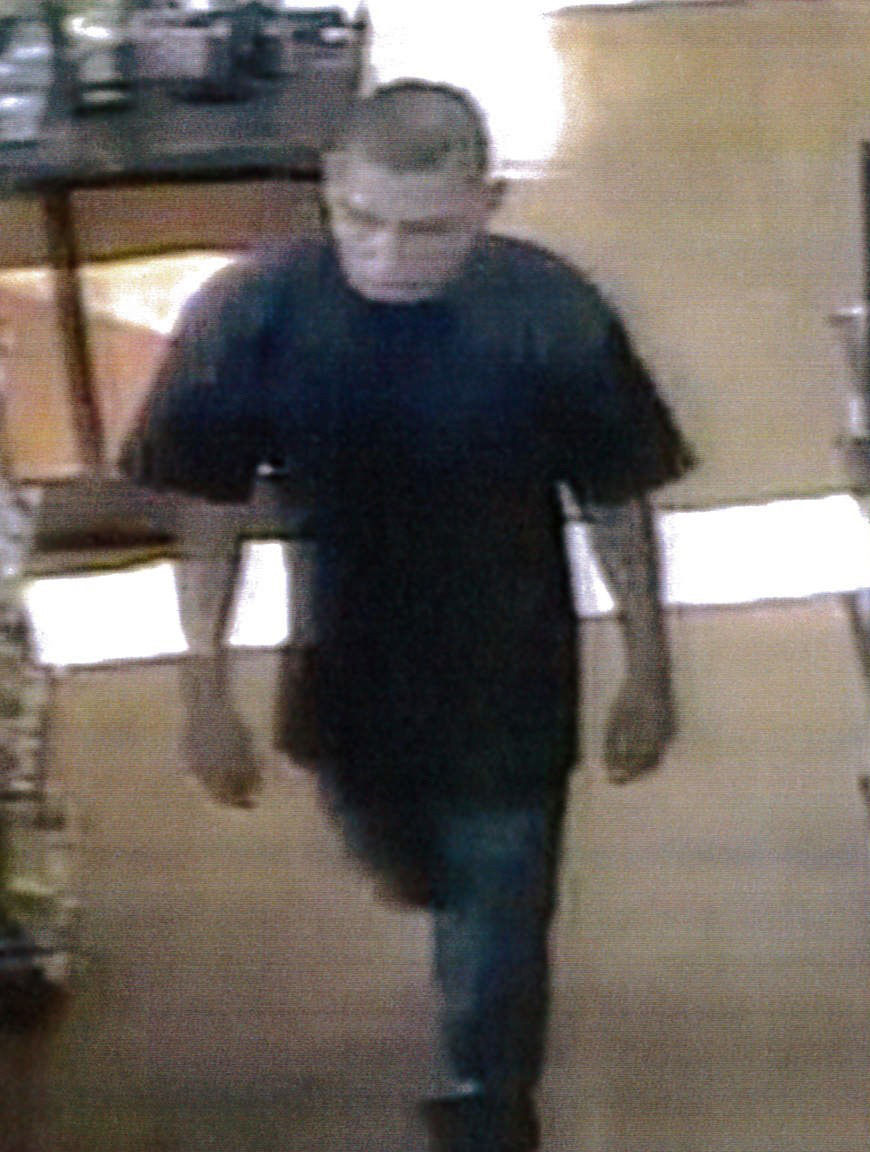 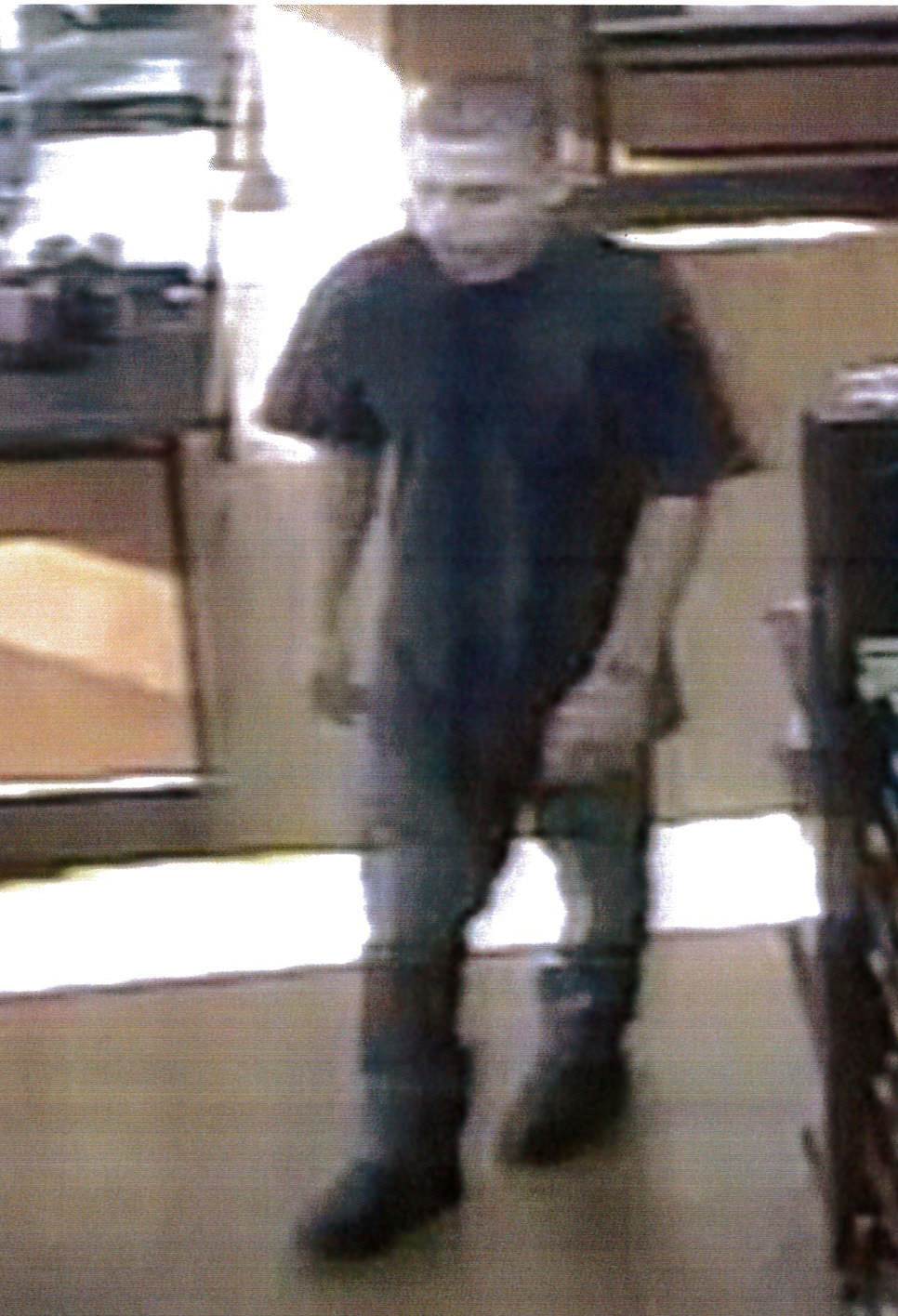 Manuel Rangel was “desperate” when he walked into a Bettendorf convenience store Aug. 17 and fatally shot the clerk in an apparent robbery gone wrong, Bettendorf Police Chief Keith Kimball said.

One day later, the 21-year-old from Genoa shot himself in the head following a short police pursuit in Nebraska. His brother, who reported him missing earlier that day, told police he was suicidal and had been upset because he could not afford to get his dog out of a kennel.

He also said he was going to prison for a long time, his brother told police.

“He was obviously an angry individual and something set him off,” Kimball said of the shooting of clerk Brittany Wilson at the Big 10 Mart. “He was on the road, I think he was desperate, and he didn’t know what direction he was probably even going.”

Wilson, who had worked at the store for about three months, was an innocent bystander that day, the chief said.

“She did not deserve this,” Kimball said. “She did not bring this upon herself in any way. This was a random act, senseless murder…a lightning strike that hit our community. And a little bit of our innocence was lost that day.”

While the investigation remains active, Kimball on Tuesday identified Rangel as the lone suspect in Wilson’s death and provided a timeline of events he said led up to and followed the shooting.

At 2:33 p.m. Aug. 17, the DeKalb County Sheriff’s Office got a report of a burglary at a dog kennel in Genoa. Gunshots had been fired at the door and a dog was missing. The dog was Rangel's.

A dark gray Chevy Cruze that fled the scene was later identified as belonging to Rangel’s mother. The car was recorded at 4:08 p.m. coming through the Interstate 88 Westbound Tollway Plaza I-Pass lanes, and at 5:06 p.m. was seen near the I-80 and I-88 interchange. At 5:10 p.m., it was observed on I-80 westbound near LeClaire.

Five minutes later, the car was seen going into the TBK Sports Complex parking lot, at Middle and Forest Grove roads. At 5:27 p.m., video captured it on 53rd Avenue driving west, turning northbound onto 18th Street near the Big 10.

The car pulled up to a gas pump momentarily, surveillance video showed. Rangel walked to the back of the car, then got back into it and pulled up to the front door, making sure no other vehicles were in the lot.

At 5:35 p.m., the car ran a red light and made a right turn from the left turn lane from 18th Street onto 53rd Avenue and continued westbound into Davenport.

Bettendorf Police got a 911 call at 5:40 p.m. from customers who found Wilson, 28, of Donahue, on the floor of the convenience store. Fire and Medic performed CPR, but Wilson died from her injuries.

On Aug. 18, Rangel’s brother reported to the DeKalb County Sheriff’s Office that Rangel was missing and suicidal. He had been depressed the last few months and was upset because he couldn't keep his dog at his parents' house at the request of the landlord, his brother told officers.

Rangel was boarding the dog at a dog kennel and could not afford to get the dog back.

Rangel’s brother said he talked to him, and learned he took his mother’s 2016 Chevy Cruze and was in Nebraska.

The conversations and text messages led his family to believe he was going to kill himself. He also told them he would be going to prison for a long time.

At some point, the family and the sheriff’s department accessed the My Chevy app and found the vehicle in western Nebraska. Law enforcement was alerted in an attempt to locate the car.

During the briefing, Kimball dispelled several rumors circulating on social media about the case. The suspect came and went through the front door, not the back door, he said, and no phone or video lines were cut prior to the shooting.

Hot and sticky weather conditions will hang over the Quad-Cities today before giving way to showers.

Update: Police have identified the 28-year-old woman who died of an apparent gun shot at a Big 10 Mart in Bettendorf Saturday afternoon.

Shooting in Bettendorf ruled a homicide

According to a Bettendorf Police Department release, the shooting at the Big 10 Mart at 2480 53rd Avenue, Bettendorf on Saturday was an attemp…

Bettendorf Police were investigating a gunshot death that occurred Saturday at the Big 10 Mart at the intersection of 18th Street and 53rd Avenue.

Bettendorf Police Chief Keith Kimball holds a picture of Manuel Rangel, 21, of Genoa, Ill., who was thought to have killed Brittany Wilson on Aug. 17 at the Big 10 Mart in Bettendorf. Rangel died of a self-inflicted gunshot wound on Aug. 18, after a short police pursuit in Nebraska according to Kimball during a media briefing at the Bettendorf Police Station on Tuesday.