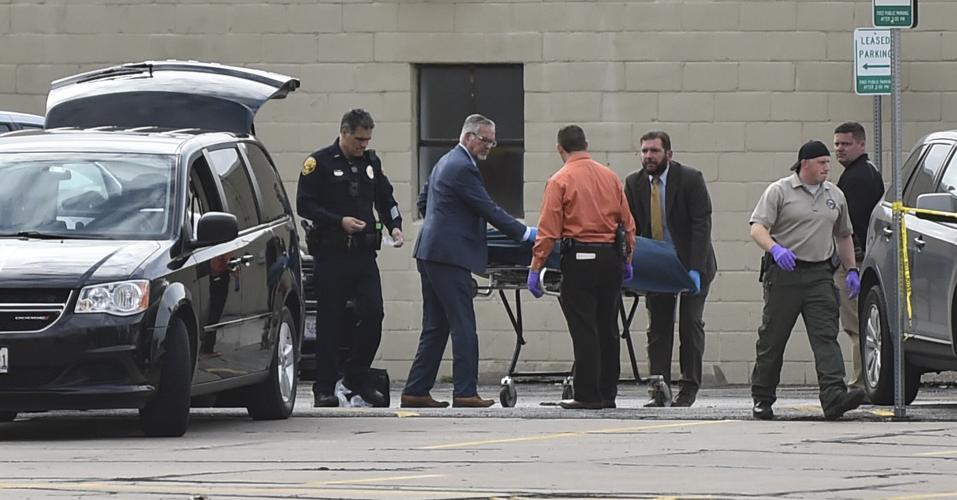 Moline police officers and funeral home personnel work at the scene of a fatal shooting near Moline City Hall on Wednesday, Oct. 31, 2018. 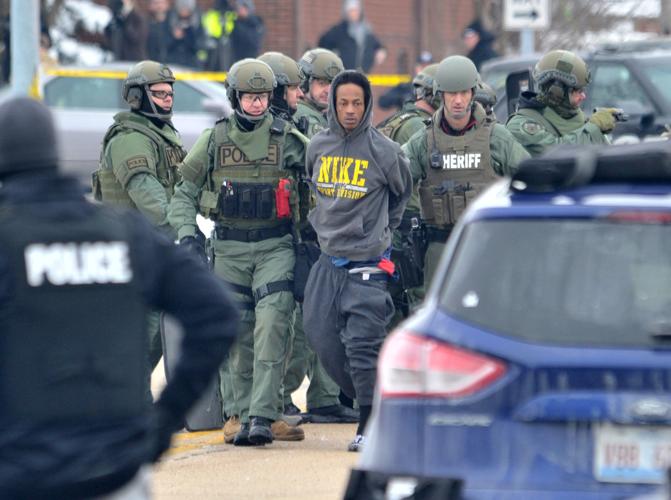 Suspect Willie Minor is led away after a shooting in East Moline on Tuesday, Feb. 6, 2018.


Moline saw an uptick in shots-fired and shooting incidents in 2018, while East Moline and Rock Island saw a decline, according to preliminary numbers released by local police departments.

“Our patrol officers are making weapons arrests all the time,” Moline Police Detective Michael Griffin said. “That they are doing it on a regular basis is alarming because it shows the amount of firearms and guns that are available to people. It’s alarming.”

In the Illinois Quad-Cities, gun violence is not limited to certain areas or to certain times of the day or night.

Another trend that continues to hit the Illinois Quad-Cities is an increase in stolen vehicles, many of them taken by juveniles.

The police chiefs and public information officers for the three metropolitan police departments in the Illinois Quad-Cities recently discussed the trends and challenges they noticed in 2018.

Preliminary numbers provided to the Dispatch-Argus through an open records request showed Moline had 24 reports of shots fired and shootings, compared to 16 in 2017.

Both cities had one reported homicide in 2018. Moline had two.

On the morning of Oct. 31, 22-year-old Corey Harrell Jr. was fatally shot while driving his car in downtown Moline. He was found dead in his car behind City Hall, across from the police department.

Police said the shooting appeared to be the result of a conflict between two groups. No arrests have been made in the case yet. Griffin said police continue to investigate Harrell’s death.

On Dec. 9, William Fowler, 31, was shot while at a neighbor’s house in the 400 block of 8th Street in Moline. He died the next day at University Hospitals in Iowa City.

Police said the home was targeted because of ongoing conflicts, but that Fowler was not the intended target and had no association with those involved.

A man and two teenagers have been charged in connection with his death.

Griffin said the department is in a better position to tackle cases of shots fired and homicides because it has done a better job of working with other agencies.

“There hasn’t been a recent homicide case to my knowledge that’s happened in Moline that Moline worked on by itself,” he said. "Crime doesn’t end at Moline’s border, doesn’t end at Davenport’s border. These are such small communities, geographically, (suspects) can go between the cities so easily that we need to continue to work together between law enforcement to identify those involved.”

In the Harrell homicide case, the Moline Police Department was immediately assisted by the Illinois State Police and Rock Island, East Moline and Davenport police departments.

Rock Island Police Chief Jeffrey R. VenHuizen​ said he was pleased to see the decrease in gun violence in the city in 2018.

“I think we have some successful strategies in place for combating crime, specifically violent drug-related crime,” he said. “I think that has had a significant impact on seeing our numbers down, along with our interaction with the community and working with them to help us in investigations.”

One of those strategies has been the reorganization of the department and the creation of the tactical operations division that focuses on violent and drug-related crime. He said more resources have been made available to the division and an officer has been assigned to the DEA task force, “which has had very good results for us.”

“There’s a lot of arguments and inflammatory language that’s being sent back and forth through various social media that has changed crime in general in the last few years,” he said. “You don’t have to be at a party to cause a disturbance. They can instigate a problem or fuel an argument in East Moline, or arguing with someone in Davenport.”

One asset that will be available this year in the Quad-Cities, VenHuizen said, is the acquisition of a machine that will match up guns and shell casings that will be purchased by the Davenport Police Department.

The machine will allow police to determine whether there is a correlation between shooting scenes more quickly, he said. Having a local machine will also allow agencies to be able to test more casings, VenHuizen added.

Davenport Police Major Jeff Bladel said the department will likely begin to use the machine in the next six to eight months.

Voicing a similar sentiment as police in the Iowa Quad-Cities, Griffin said part of the reason for the increase is that it seems to be a growing fad among juveniles.

“It’s kind of the double-edged sword that we worked so hard to get it out to the media to get people to be aware of an issue going on, and that kind of compounded the issue and more juveniles were becoming aware of it,” he said. “It was the thing to do.”

Another trend Moline saw in 2018 is that adult methamphetamine users were arrested on stolen vehicle charges.

Griffin said some of them had told police that they started doing it after seeing “the kids on TV doing it.”

“It is exponentially easier for us to focus on the group of adults because they are known to us,” Griffin said. “We’ll get kids in stolen cars that have no prior contacts with police.”

Gaul said the thefts continue to be a crime of opportunity.

“They are looking for unlocked vehicles, primarily with keys in them, running at a gas station, running at a pizza place, unlocked in a driveway,” he said. “It’s been all over town. There’s no primary location.”

An SUV drove the length of the I-74 bridge bike path. Three people were injured.

Authorities on Monday released the name of a Moline man they say was killed after being struck by a SUV on the Interstate 74 bridge pedestrian path early Sunday.

Moline mattress company owner accused of bribing witness with $5,000 and a free mattress

John A. Wheatley, 59, of Moline, faces four charges of tampering with a witness or juror, according to Scott County court records.

A second man has died after being struck by a drunken driver on the I-74 bridge walk path.

Name released for victim of Sunday shooting in Rock Island

The man who died in a single-vehicle crash on Great River Road between LeClaire and Princeton has been identified as Mantral McClary, 20.

One dead, three injured in Scott County crash between LeClaire and Princeton

Rock Island Police are investigating a shooting that led to the death of a man Sunday afternoon.

Moline police officers and funeral home personnel work at the scene of a fatal shooting near Moline City Hall on Wednesday, Oct. 31, 2018.

Suspect Willie Minor is led away after a shooting in East Moline on Tuesday, Feb. 6, 2018.