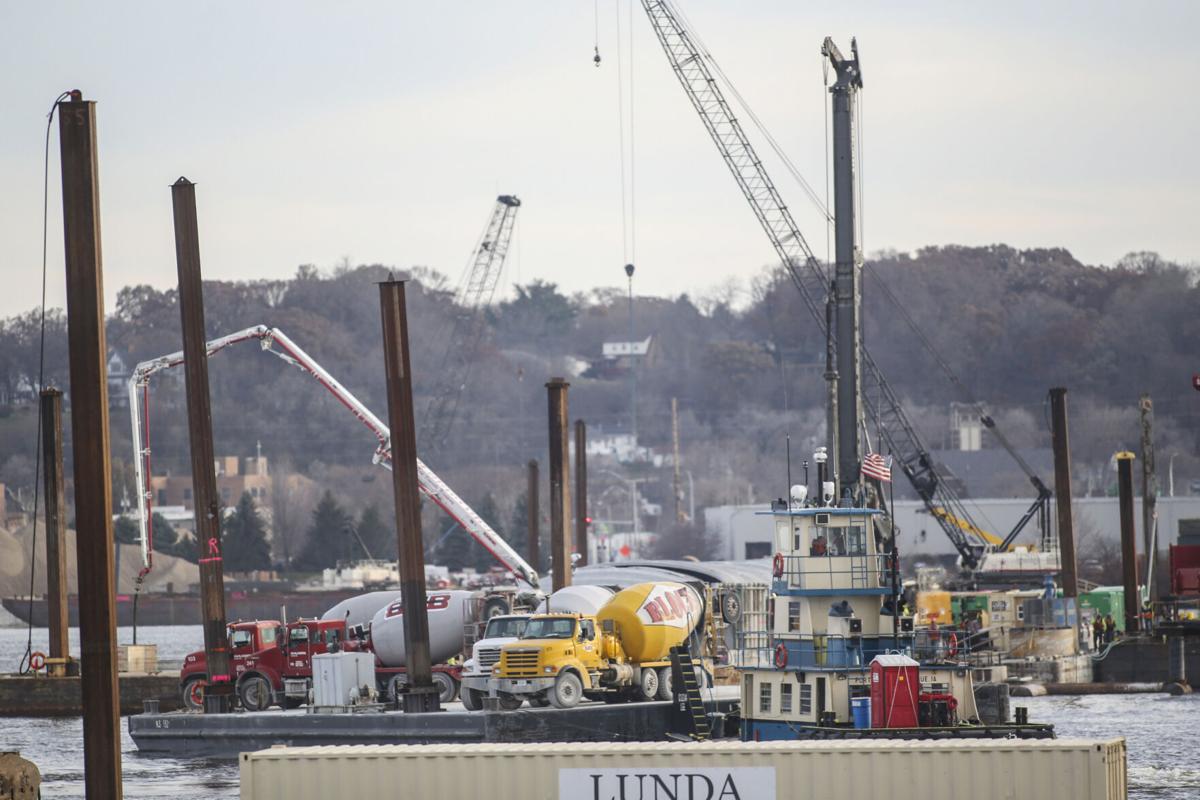 A handful of cement mixing trucks are seen being transported by barge on the Interstate 74 bridge project in Bettendorf on Monday, November 27, 2017. 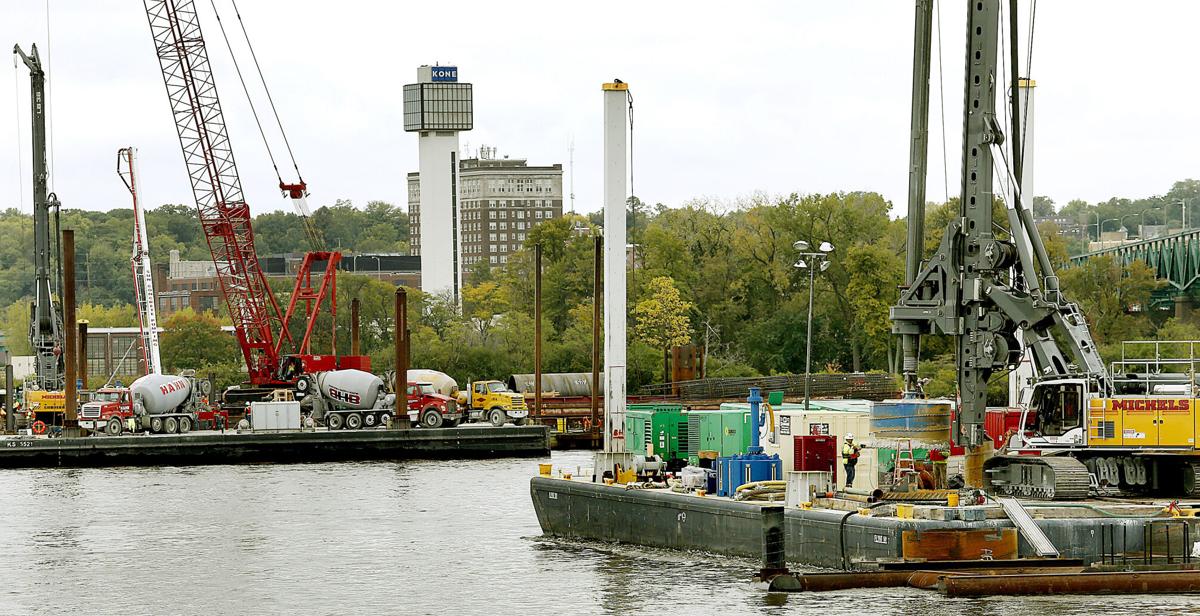 Trucks from Hahn Ready Mix on barges bring cement to the site of a new Interstate 74 bridge over the Mississippi River in Bettendorf, Iowa Thursday October 12, 2017.

A major supplier of concrete for the new Interstate 74 bridge has filed a lawsuit against the bridge builder, alleging failure to pay for concrete, labor and services.

Filed in Scott County District Court, the document details alleged actions by Lunda that created additional expenses for Hahn. Some of the cost-cutting measures suggest efforts to save money resulted in the use of materials that were outside of contract specifications by the Iowa Department of Transportation, DOT, which is overseeing the bridge portion of the nearly $1.2 billion span and highway project.

Officials from the DOT said all materials have been inspected and approved.

Lunda Construction, of Black River Falls, Wisconsin, was awarded a $322 million contract to build the twin spans of the new Bettendorf-Moline bridge. The company has had disputes with the DOT over the "constructibility" of the bridge design. It is more than a year behind schedule.

A Minneapolis attorney representing Hahn declined Friday to comment on the lawsuit.

It includes details about the cement supplier using "special concrete mix never before attempted." The special mix, the lawsuit states, was required, because Lunda didn't use cooling tubes for the concrete in an effort to save money.

Using the special mix, Hahn's complaint alleges, created a "laitance," which is described as a layer of "weak" material that settles on the surface of the pour. The company claimed Lunda refused to pay Hahn for their unique concrete mix, due to the expense of removing the laitance.

The absence of cooling tubes also required Hahn to use an expensive supply of liquid nitrogen, according to the suit.

Neither the lack of cooling tubes, nor the presence of the laitance introduced unsafe materials for the bridge build, Lunda's attorney said Friday.

Danielle Alvarez, project manager for the Iowa DOT, confirmed Friday that the concrete work has been closely inspected.

"The concrete that has been incorporated into the project thus far has been monitored, tested, and approved by the Iowa DOT," Alvarez said. "We have established procedures in place to ensure the quality of the structure and that each element meets design requirements.

"Concrete laitance is normal in some applications. Concrete materials separate through the placement process and there are established procedures for removing this 'film' from the top of the concrete. Laitance, once removed, does not impact the durability of the concrete.

"The DOT is confident in the durability and long-term performance of the concrete incorporated into the project."

Hahn's lawsuit also alleges: "Lunda has withheld payments from Hahn for alleged back charges for delivery issues, including instances of alleged late delivery. Lunda’s back charges are improper, unwarranted, and arbitrary in that they either did not occur, or did not occur for the duration that Lunda alleges."

"Despite demand for payment, Lunda has failed and refused, and continues to fail and refuse, to make full payment to Hahn for the ready mix concrete it supplied for the Project and for claims asserted by Hahn, all of which met the requirements of the Contract.

"Lunda’s refusal to make payment in full for the ready mix concrete supplied by Hahn and refusal to honor legitimate claims by Hahn is without justification and places Lunda in breach of the obligations, including its duty of good faith and fair dealing, owed to Hahn under the terms of the Contract and PO (purchase order) Contract."

Lunda's attorney declined to comment on the financial claims asserted in Hahn's lawsuit.

Rock Island County Coroner Brian Gustafson has released the name of the woman who died Thursday night in a fire in Port Byron.

It's going to be another week of heat with temps in the 90s along with nasty heat indexes. Here are the weather details from the National Weat…

After nearly four months of emergency steps to manage the spread of new coronavirus infections, COVID-19 cases in Iowa are on the rise again — alarming local health officials.

Mourning in the Quad-Cities: Despite pandemic and change, funerals still about honoring deceased

CAMBRIDGE — A nine-count lawsuit has been filed in Henry County Circuit Court against the city of Colona having to do with injuries as a result of the collapse of a deck at Colona's Scott Family Park in June of 2019.

An additional 83 people in the Quad-Cities were confirmed to have COVID-19 on Saturday, July 4.

A handful of cement mixing trucks are seen being transported by barge on the Interstate 74 bridge project in Bettendorf on Monday, November 27, 2017.

Trucks from Hahn Ready Mix on barges bring cement to the site of a new Interstate 74 bridge over the Mississippi River in Bettendorf, Iowa Thursday October 12, 2017.