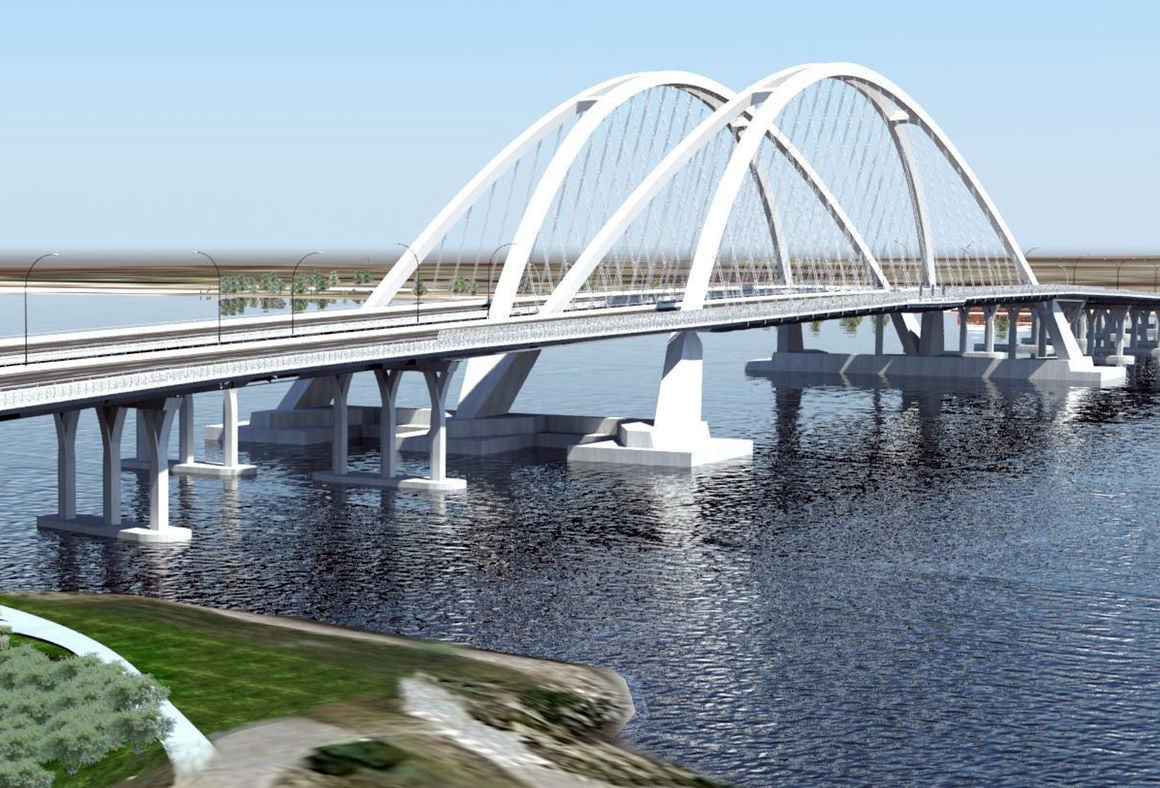 This Iowa Department of Transportation rendering shows the new Interstate 74 bridge design, from the Iowa side of the river looking toward Illinois. 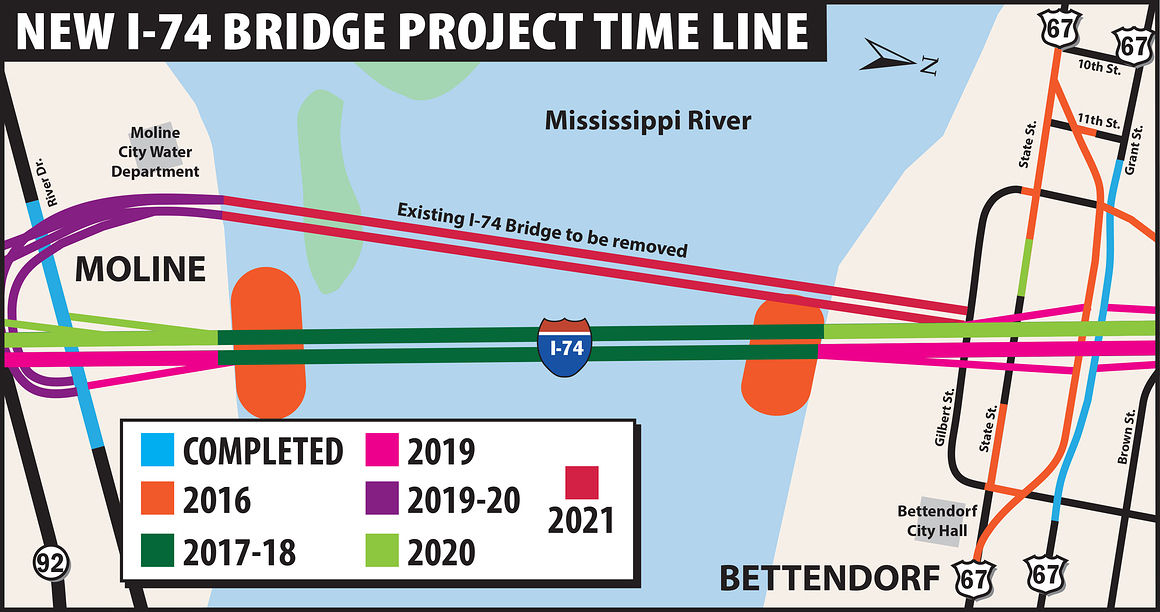 Contractors are getting a look at the next big steps in the Interstate 74 bridge project as the bidding process begins for the primary phase.

The new bridge will be built east of the existing one, with two spans of four lanes and full shoulders. A recreation trail and an overlook are also part of the design.

Much preparatory work has already been done on the Illinois and Iowa shores. This summer construction of the bridge itself is scheduled to begin.

About 200 people attended the meeting, Mr. Shea said, but he was uncertain how many companies were represented. He said the meeting was organized because of the scale and complexity of the project.

"We expected to have a lot of questions from contractors," he said.

Mr. Shea said the meeting focused on potential candidates for the prime contractor of three major elements of the 2017-18 phase:

— Construction of the main span over the Mississippi River;

— Construction of the spans that transition motorists from land to the main span; and

— Work on the infrastructure on the Iowa shore.

The three contracts, worth about $400 million, could be handled by individual contractors or grouped together.

Mr. Shea anticipates local trade unions and companies will be tapped as subcontractors once the agreements are hammered out.

"I think a lot of the them will be contacted because of their knowledge (and location nearby)," he said.

The bids will be opened April 25, Mr. Shea said, with work expected to begin in the summer.

The Illinois Department of Transportation is preparing a similar process for the elements of the project it is responsible for, said John Wegmeyer, project implementation engineer for Illinois DOT District 2.

The first will be work on the new bridge viaduct, Mr. Wegmeyer said, with a mandatory pre-bid meeting on the $120 million project expected in coming weeks so the candidates can ask questions and learn more about the work. The bids will be opened in June, with construction expected to start in August.

A similar process will happen later in the year, this time for the $120 million contract to widen I-74, he said. That work can occur through the winter, he said.

The new bridge is expected to open in 2020, with the current bridge demolished in 2021. The total bridge project is expected to cost $1.2 billion, Mr. Shea has said.

What do we know about the Omicron variant?

WHO designates new COVID strain Omicron as ‘variant of concern’

WHO designates new COVID strain Omicron as ‘variant of concern’

Former KWQC TV6 news anchor Gary Metivier will run for the Scott County Board Supervisors in 2022 as a Republican.

Davenport man killed after being struck by a car

A man died Friday after being struck by a car in Davenport.

In fatal Bettendorf fire, Surrey Heights was in play

In the 15 years that have passed since a multimillion dollar home in Bettendorf was destroyed by fire, the number of career firefighters in the city has nearly doubled.

Moline and Rock Island police are investigating robberies that occurred in their cities Tuesday.

Moline neighborhoods active, inactive and somewhere in the middle

Moline police on Wednesday continued the investigation into the armed robbery Tuesday night of LollyPalooza Art and Glass.

Murder suspect turns himself in to Rock Island Sheriff's Office

This Iowa Department of Transportation rendering shows the new Interstate 74 bridge design, from the Iowa side of the river looking toward Illinois.