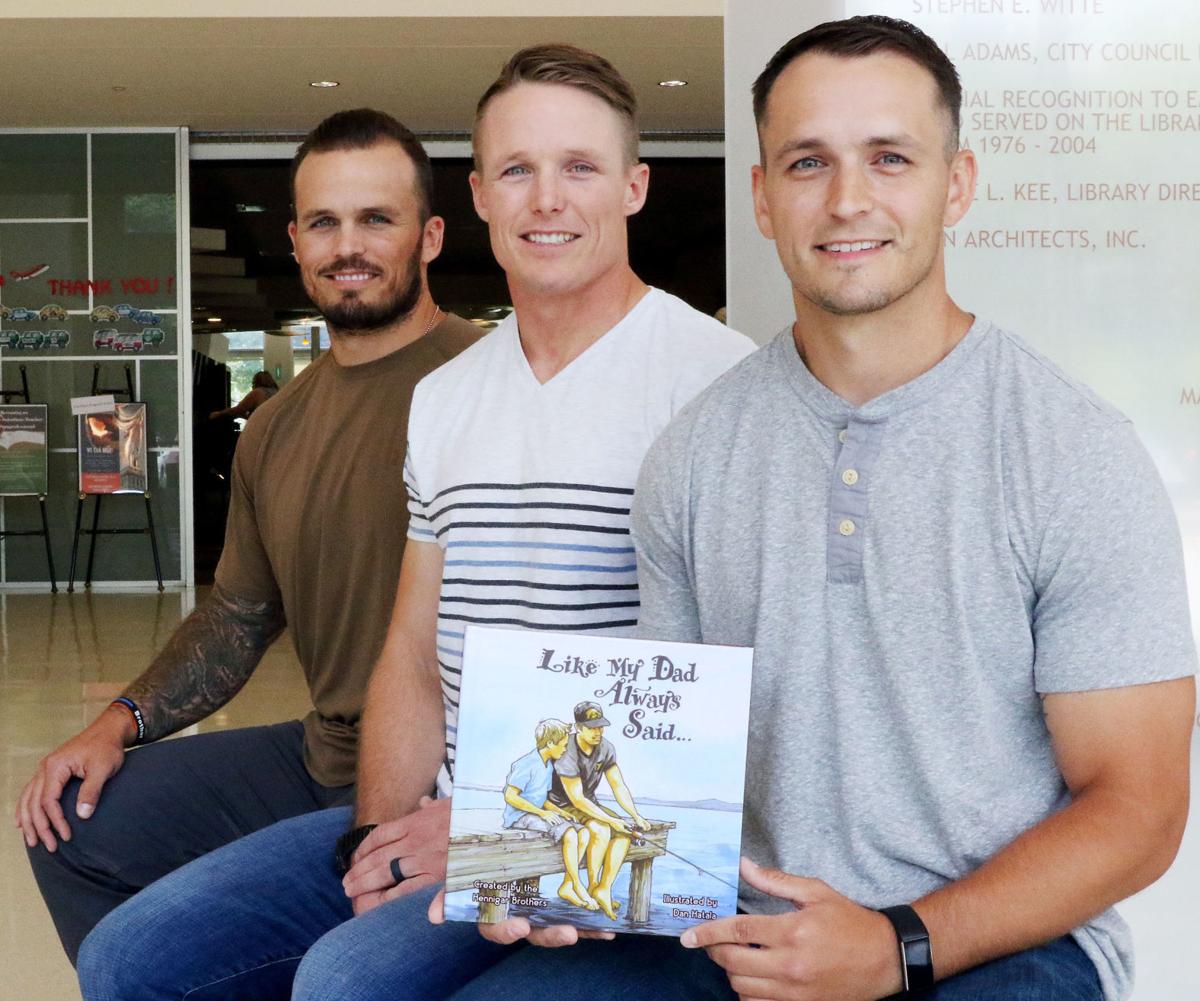 Brothers Collin, right, Jordan and Dustin Hennigar teamed up to write a children’s book, “Like My Dad Always Said …” 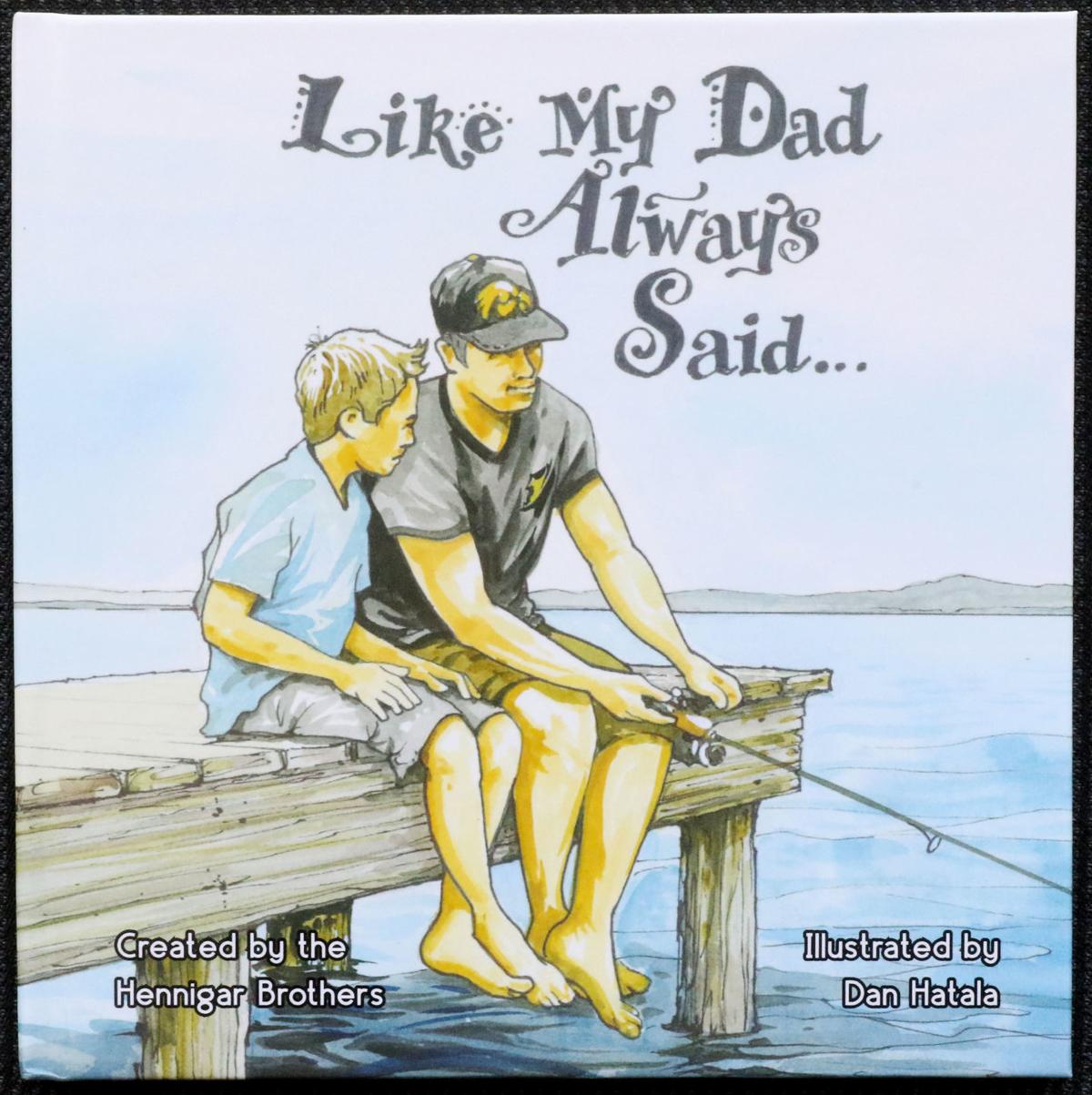 “Like My Dad Always Said …” was written by Collin, Jordan and Dustin Hennigar.

The three brothers take great joy in being fathers to their five little boys.

So they wrote a book about it.

The Hennigar brothers were doing something familiar — sitting at their parents’ table — when the idea struck.

The content of their book is basic and simple. It is a collection of “Dadisms” the men say helped shape them into the people they are today.

The oldest, Dustin, is a locomotive engineer and military veteran. The middle son, Jordan, works for the family construction business in their hometown of Fort Madison, Iowa. And the youngest brother, Collin, is a Moline police officer. The baby of the family, sister Jobeth, designed their marketing material.

“Each page of our book is a conversation piece that you can use with your kids,” Collin said.

“It’s a way to open up conversations,” said Dustin, who has two young sons.

Added Jordan: “In this world where electronics are huge, this is a check-yourself moment, engaging with kids in a different way.”

The brothers agreed on expressions they recall from their childhoods, such as, “Always carry your end of the board.”

For the Hennigars, life lessons were delivered by their dad in the form of just such expressions. But more than the meanings behind the expressions have stayed with them.

“Sometimes, they bring back a moment, and you can remember a look on Grandpa’s face when he said these things,” Dustin said.

“Just thinking about the things they said to us preserves them, and that’s valuable,” Jordan said.

The brothers plan to produce a series of books, given that many of their most memorable Dadisms didn’t make the cut in the first book.

Though they geared “Like My Dad Always Said...” to dads and sons — relationships they intimately understand — the Hennigars emphasize the book is appropriate for all.

“We come from the perspective of being fathers to sons,” said Jordan, who also has two sons, including a newborn. “By no means would these expressions not fit to father and daughter or mother and son or daughter.

“The other thing about the book is that it will trigger memories for everyone of the expressions they learned in their homes.”

“He was in an art class in high school with our Uncle Mike,” said Collin, who has one little boy.

The whole Hennigar family is excited about the project — Grandpa Hennigar bought five copies of the book — but they’ve been reluctant to share their news with co-workers, including Collin; the Moline cop.

“I just really kind of kept it to myself,” Collin, the Moline cop, said of his work as a writer.

Before he could finish his thought, brother Jordan chimed in: “Like Grandpa used to say, ‘Don’t tell anyone you’re getting a new car until it’s sitting in the driveway.’”

And the brothers’ simultaneous laughter hinted they’d found another expression for their next book.

Quad-Cities restaurants in a pickle

Here's why Quad-Citians are talking pickles on social media.

Jumer's Casino and Hotel in Rock Island has been sold to Bally's Corporation for $120 million.

Brothers Collin, right, Jordan and Dustin Hennigar teamed up to write a children’s book, “Like My Dad Always Said …”

“Like My Dad Always Said …” was written by Collin, Jordan and Dustin Hennigar.