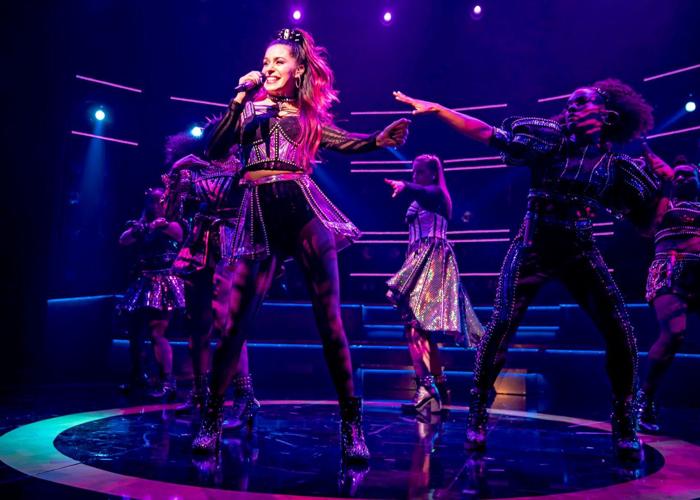 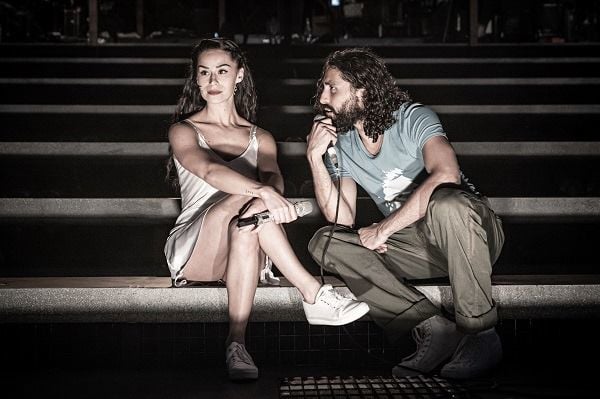 Samantha Pauly as Eva Peron in the 2019 London production of "Evita." 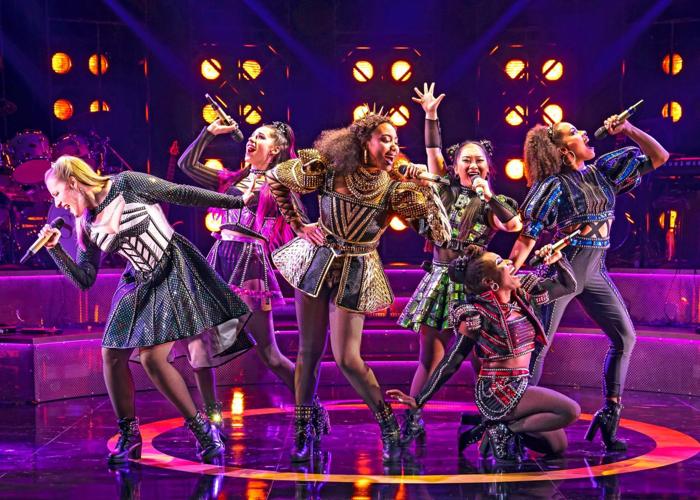 Samantha Pauly, second from left, in the musical "SIX." 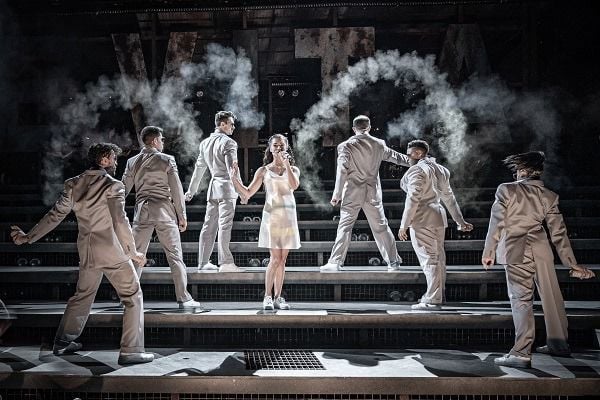 A scene from the recent London production of "Evita," starring Samantha Pauly. 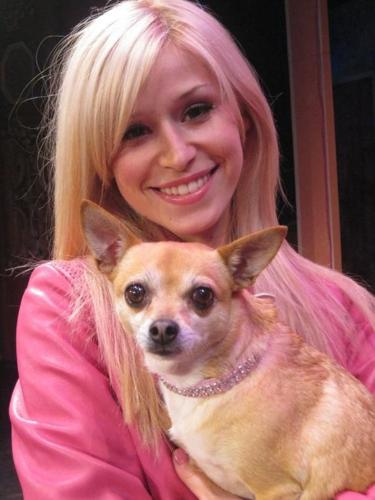 Bettendorf native Samantha Pauly, then 22, dyed her hair blonde in 2012 to play Elle Woods in "Legally Blonde" at Circa. 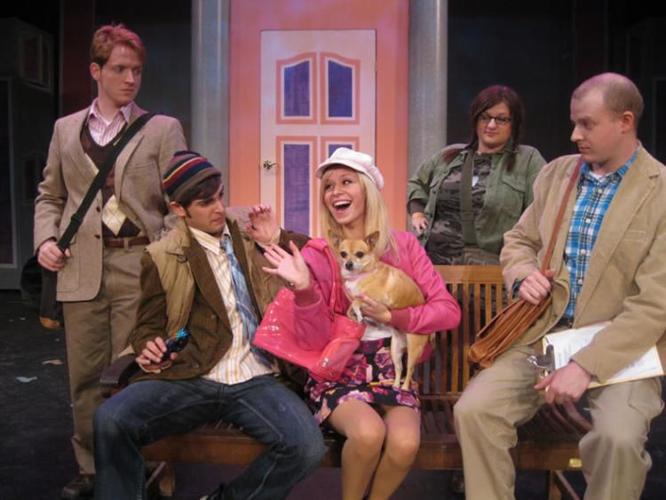 A scene from the 2012 production of "Legally Blonde" at Circa '21 Dinner Playhouse, starring Samantha Pauly.

It's fair to say that Samantha Pauly's theater career is flying high.

The 29-year-old Pleasant Valley High School alum won raves for her recent portrayal of the title role in “Evita” in London, and also for her portrayal of one of King Henry VIII's six wives in the new musical “SIX” in Chicago.

She will make her Broadway debut in the latter role when the show premieres this coming February.

“It is an absolute dream come true,”  said the Chicago-based actress of her stage career. “I had a rough ending to my 2018 with a national tour abruptly getting canceled. I had honestly begun to think about quitting theatre and was figuring out other possible career paths. To all of a sudden know that I'm going to be originating a role in a Broadway show, to talk to my agent about going to the Tonys, to discuss making an original Broadway cast recording, it is just unfathomable to me."

“SIX” — which will open on Broadway (after previews) March 12 at the Brooks Atkinson Theatre — is a British musical by Toby Marlow and Lucy Moss, which premiered in 2017 at Edinburgh. It's a modern retelling of the lives of the six wives of Henry VIII as a high-tech pop concert.

A May 2019 review at newcitystage.com said: “Part musical competition, part history lesson, this 75-minute rock-star performance deserves the continual applause and cheers it received from the crowd on opening night. Musical theater at large should be grateful that the women of 'SIX' (Adrianna Hicks, Andrea Macasaet, Abby Mueller, Brittney Mack, Samantha Pauly, and Anna Uzele) are treading the boards instead of headlining their own concert venues. They are a powerhouse ensemble with the vocality of icons like Beyonce, Adele, Rihanna and Alicia Keys."

A July review at hpherald.com said the show's “most gut-wrenching tale comes from Samantha Pauly as Katherine Howard, who channels Ariana Grande or Britney Spears in 'All You Wanna Do,' a litany of falling in love with a series of men who just want to use or abuse her that morphs powerfully from light-hearted acceptance to moral outrage. The second wife to be executed, she’s barely remembered compared to Anne Boleyn.”

A graduate of Viterbo University in La Crosse, Wis., Pauly said she heard about “SIX” late last year from friends in London who told her it would be making its U.S. debut at Chicago's Navy Pier. Early this year, Pauly had booked another show in Chicago, and then got called in for “SIX.”

“I said no three times because I didn't want to break a contract I already had, and then finally one night the music director of 'SIX' called me after they'd already had auditions and told me I needed to at least make a tape to show the creative team,” she recalled. “So I made a tape at 10:30 that night and got sent to final callbacks a couple of weeks after that. I got an offer to play Katherine Howard the next day.”

Katherine was Henry VIII's fifth wife, and in the show, her character is very youthful and fun, Pauly said, noting her style and song is loosely based on Ariana Grande. Katherine was suspected of adultery, and the king had her beheaded in the Tower of London.

This fall and winter, Pauly will return to the touring production of “SIX” in Edmonton, Alberta, and The Ordway in St. Paul, Minn., where it will run from Nov. 29 to Dec. 22.

Pauly played the lead in Circa '21 Dinner Playhouse's “Legally Blonde” in 2012.

Veteran Circa director Jim Hesselman, who worked with her on "Legally Blonde," said recently he knew Pauly had theater magic.

"Not only in talent but professionalism. It was apparent she was incredibly consistent, prepared, thinking about the future, and getting the most out of this particular part," he said. "She was easy to work with in a difficult role."

"It's persistence, professionalism, knowing what you want," Hesselman said. "The theater world is small enough, reputation is all. I know she has the talent, the guts, and the intelligence to weather all of that."

An August review at standard.co.uk praised Pauly's performance. "The production’s beating heart is American actress Samantha Pauly, who possesses a beguiling blend of butter-wouldn’t-melt charm and sensual guile, a pristine voice with a steel edge, and more than a touch of star quality," the review said.

It was Pauly's fourth version of the show, her third as the mesmerizing, domineering First Lady of Argentina, who died at age 33 of cancer in 1952.

Pauly's first “Evita” was in 2015, the year after she moved to Chicago, playing the mistress, who sings “Another Suitcase in Another Hall." In 2016, she got to play Eva at The Marriott Theatre in Chicago, and then in 2018 at Westport Country Playhouse in Westport, Conn.

“I've always loved this show; the score is unbelievable,” she said. “I guess I keep coming back to the show because I truly enjoy performing it. It's not an easy sing — I personally believe it's one of the most difficult scores in musical theatre history, so I take great pride in being able to say I can do it.”

The most recent revival in London was “a completely different and new take on the show. Unlike anything, anyone has ever seen, and that's what specifically drew me to that one,” Pauly said. “I loved Jamie Lloyd's new production because it was very raw, edgy, dark and dirty. I had no costume changes, no wig, barely any makeup.

“We focused on the story and her relationships. It made Eva very human and accessible to audiences — someone that they could watch and say, 'I've felt that before,' or 'I've gone through that pain before,' ” she said. “Her story was not a happy one — her life ended too soon — and I think we were really able to capture her insecurities and fears.”

“I love Eva's journey through the show, especially singing that journey,” Pauly said. “The score just really conveys her power, and it makes me feel so powerful when I perform it.”

That “Evita” was also her first time in London; she just celebrated her fifth wedding anniversary and her husband is a CPA.

“I was given housing and was put up in Central London, which was busy and exciting,” Pauly said. “The Open Air Theatre in Regent's Park is really magical because you're able to use the elements in the show. The theater is kind of in a bowl with stadium seating on one side and giant trees surrounding the back of the stage, which creates a really beautiful backdrop."

“It began to rain lightly right at the end during Eva's 'Lament' when she's dying and thinking back on her life and the choices she made,” she said. “It was beautiful.”

Among her other favorite roles have been Jovie in “Elf the Musical,” Betsy in “Honeymoon in Vegas,” and Mimi in “Rent.”

“I love being able to take people to another place for two and a half hours,” she said of performing. “Whether they need an escape from everyday life, they need to relax, or they need something to make them happy. With the Instagram world now, I've started to receive a lot of messages about how much a show means to them because they were able to forget about a rough time, an illness, anxiety, or something they were going through.

"If I can do that for someone while I'm on stage, then I've done my job.”

Monday briefing: Area rivers cresting, when I-74 cut through Moline, and schools honored

Enjoy today as temperatures will take a slide later in the week. Here are the weather details from the National Weather Service.

Gingerbread and glühwein: The best Christmas markets in Europe this year

Gingerbread and glühwein: The best Christmas markets in Europe this year

Samantha Pauly as Eva Peron in the 2019 London production of "Evita."

Samantha Pauly, second from left, in the musical "SIX."

A scene from the recent London production of "Evita," starring Samantha Pauly.

Bettendorf native Samantha Pauly, then 22, dyed her hair blonde in 2012 to play Elle Woods in "Legally Blonde" at Circa.

A scene from the 2012 production of "Legally Blonde" at Circa '21 Dinner Playhouse, starring Samantha Pauly.