Subscribe
Read Today's E-Edition
Share This
A pump track, a giant waterspout, and a rooftop restaurant: Moline advances plans for land under old I-74 bridge
0 Comments
Share this
1 of 4 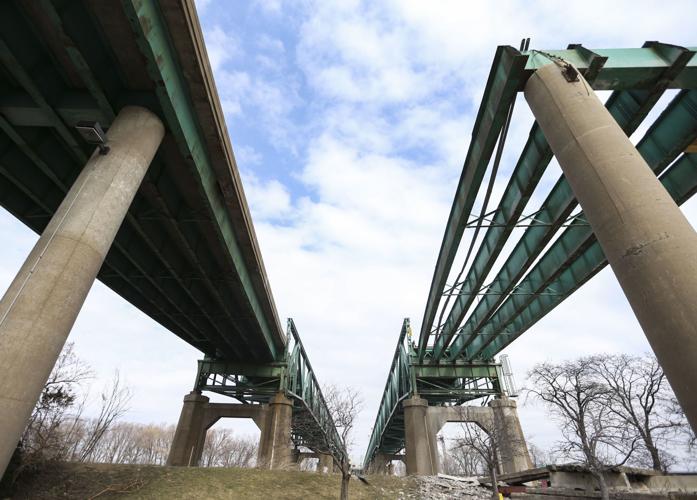 Once the former Interstate 74 bridge is demolished, Moline will redevelop the area. Ideas include a skate park and pump track, a giant waterspout and a rooftop restaurant. 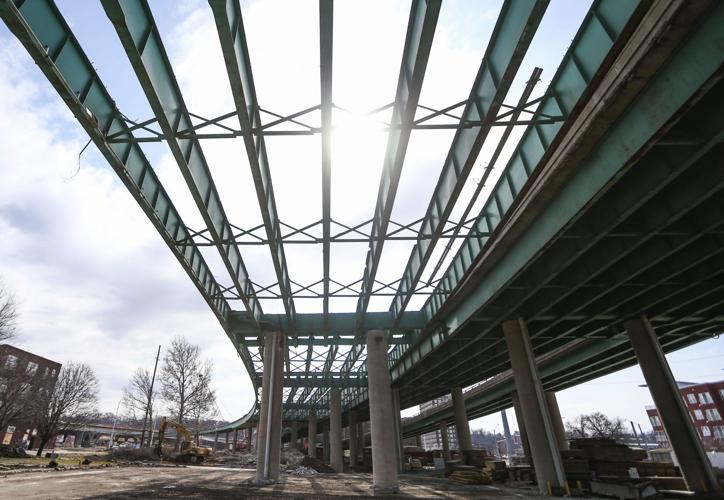 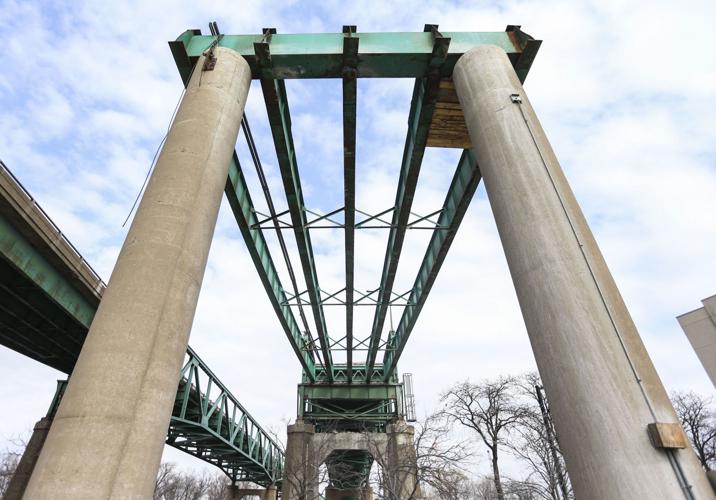 Here's a look at the old westbound Interstate 74 bridge in Moline.

The Iowa DOT is seeking requests for proposals for a consultant/inspector for the demolition of the remaining structures of the old I-74 bridges. The deadline for bids is Feb. 23.

As demolition of piers and ramps for the old Interstate 74 bridge in downtown Moline gets closer, plans for using the long-dark land below them also are advancing.

At the fore of popular concepts is a skate park that could be built under a section of the new bridge, a roof-top restaurant at the city-owned Spiegel Building and the creation of a shopping and recreational area just west of the new bridge, dubbed Mill Town Basin.

The redevelopment of riverfront and near-riverfront land downtown frequently is labeled one of the biggest and most important projects ever for Moline and the region. The city has for years been preparing a plan for developing land that for decades has existed in the shadows of concrete and steel.

Renew Moline, the nonprofit group that focuses on economic development in the city, has worked with land-use specialists from the Urban Land Institute to come up with ideas. They also have solicited both in-person and virtual input from the public.

From 500 new housing units to a zip line over part of the Mississippi River, experts are advising Moline leaders to think big when planning their new riverfront and downtown.

The Moline City Council this week was asked to endorse some of the concepts that have been identified as priorities. Support for most of them was unanimous.

"The direction provided by council on Tuesday evening allows us to support city staff in developing work plans, timelines and budgets for the projects," Alexandria Elias, Renew's president and CEO, said. "Naturally, those would go back to mayor (and) council for further refinement as appropriate and final approval. The projects have varying degrees of complexity, cost and challenges and thus will have varying timelines."

Some of the first ideas to garner attention were a waterspout that would shoot 200-to-400 feet above the river and be visible from the new bridge and a zip line from the former KONE tower to a small offshore island.

But another concept is gaining momentum, partly because the public's response to it was particularly favorable. A skate park and pump track (a circuit ridden by cyclists who generate momentum by using body movements, rather than pedaling) could be built underneath a new downtown overpass.

The feature was not popular with one city official, former public works director and 7th Ward Alderman Mike Waldron. He categorized a previous experience with a skate park at Browning Park as "an unmitigated disaster" and said he does not support another attempt.

"It's a horrible idea, but you go ahead and do what you want," Waldron said during Tuesday's meeting. "I lived through the Browning Park skate park. I don't want to pick up another hypodermic needle."

The skate-park criticism was one of few negative responses to the redevelopment ideas. Aldermen were otherwise enthusiastic about specific plans, especially for Mill Town Basin, which would be located west of the new bridge.

A water basin would be created in the area between the Mississippi River and River Drive and could be surrounded by retail kiosks, year-round recreational offerings and other features.

Mill Town Basin would be "a great differentiator," Alderman Matt Timion, 4th Ward, said. "I really like this because nobody else is doing this in the Quad-Cities."

Uses for the Spiegel Building near the foot of the new River Drive off-ramp also were the subject of considerable enthusiasm, especially after an architect proposed a rooftop space that could be used as a restaurant.

Before the new bridge was built, the Spiegel was largely disconnected from the downtown, but it has since emerged as a high-visibility property. Its reuse currently is intended as an arts-dominant "socializing and shopping experience," Elias said.

Meanwhile, some new ideas were put forth, and some aldermen appeared to have doubts about another.

Alderman Mike Wendt, 3rd Ward, asked whether it would be possible to convert the hydro dam at Sylvan Island into navigable rapids, such as those that existed there decades ago. He also proposed making use of two pillars from the old bridge that are to be spared from demolition to protect mussel habitats.

He suggested considering a boat-up movie and/or concert venue, which could be economically created by stretching a "sail" between the pillars to mimic a video screen that would be visible by shore or by boat.

Wendt also was one of several aldermen who questioned the value of the proposed waterspout, noting the area identified for it is used by a rowing club, the Channel Cat water taxis and other river traffic.

Alderman James Patrick Schmidt said the waterspout interested him, but he doubted it would be enough of a bridge-traffic draw to generate more downtown foot traffic.

Timion suggested "a really cool compromise" could result from the creation of additional or alternative water features.

One major next step for the downtown riverfront will be the creation of a master plan, which would sharpen the focus of the city's large collection of major projects. The U.S. Army Corps of Engineers and the Illinois Department of Natural Resources will be consulted throughout, given the agencies' mandatory role in river-related developments.

Teachers describe chaos and feeling unsafe — and many are telling families and fellow teachers to avoid the district.

What's going up in the Quad-Cities? Here's a peek at a few things coming soon

Here's a peek at eight businesses and other development coming soon to the Quad-Cities.

Moline man accused of shooting at an occupied vehicle

Authorities allege a Moline man shot at an occupied vehicle on May 7 in Moline during an argument with the other driver.

'I'll do anything to see Younes': Crash injures groom, usher in Davenport

Friends of bride and groom Grace Markovich and Jack Dunn have organized a fundraiser for Younes Dayekh. He was severely injured in a crash in Davenport on Friday, where he was visiting to serve as an usher in the wedding.

Davenport police are investigating a two-vehicle crash that seriously injured two people, one of whom suffered life-threatening injuries

Rock Island mansion was a showpiece when built in 1911. A group is restoring it to its former glory

For the first time in decades, the staircase walls of the Hauberg Civic Center are the same colors they were the day Susanne Denkmann walked down the steps in her wedding gown to marry John Hauberg.

Bettendorf Schools to meet with parents, teachers after some said they felt unsafe in the middle school

One person was hospitalized with a gunshot wound to the chest during a shooting Saturday in East Moline at bar close, according to police.

A second man has been arrested on robbery and burglary charges in connection with the Feb. 2 robbery of people in a room at the Motel 6 in Davenport.

The 7% pay raise would be for six elected officials whose salaries are more than $90,000 each.

Once the former Interstate 74 bridge is demolished, Moline will redevelop the area. Ideas include a skate park and pump track, a giant waterspout and a rooftop restaurant.

Here's a look at the old westbound Interstate 74 bridge in Moline.

The Iowa DOT is seeking requests for proposals for a consultant/inspector for the demolition of the remaining structures of the old I-74 bridges. The deadline for bids is Feb. 23.