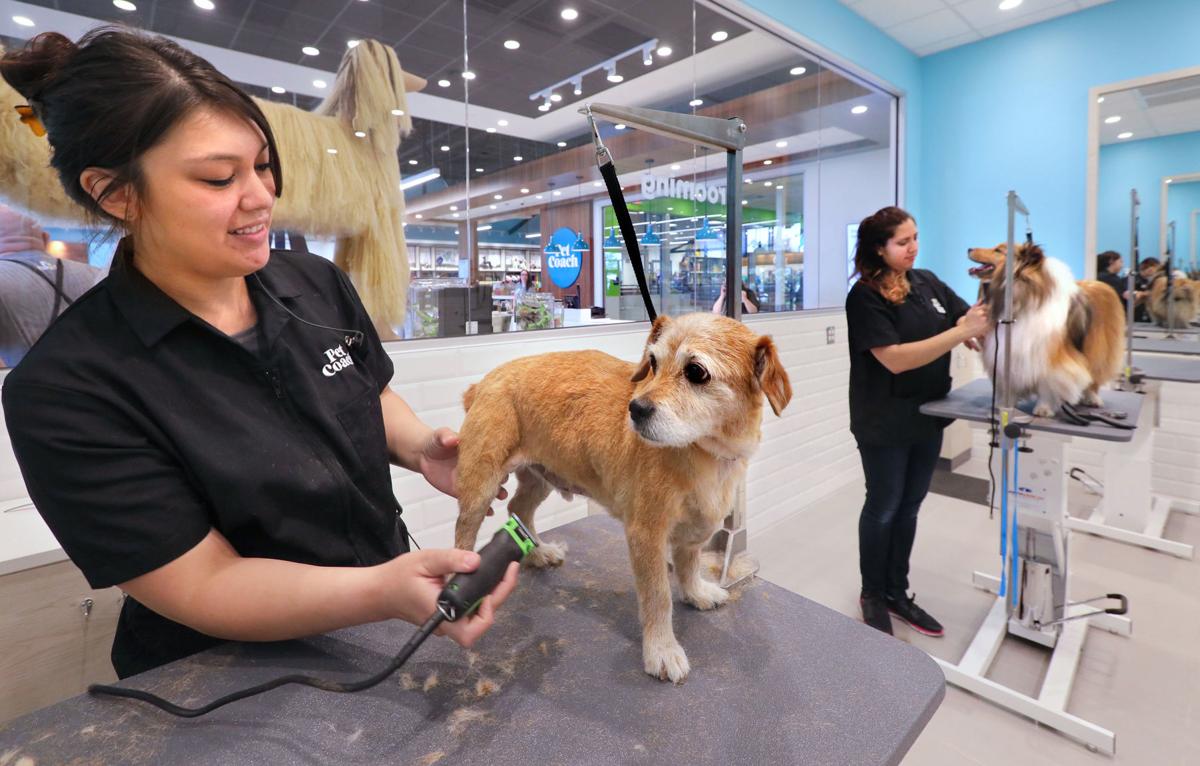 Sprocket gets groomed by Nicole Pierce, at left, while Lucille gets groomed by Crystal Brown in the Grooming Salon of the new PetCoach store in San Marcos, Calif., on July 13, 2018. 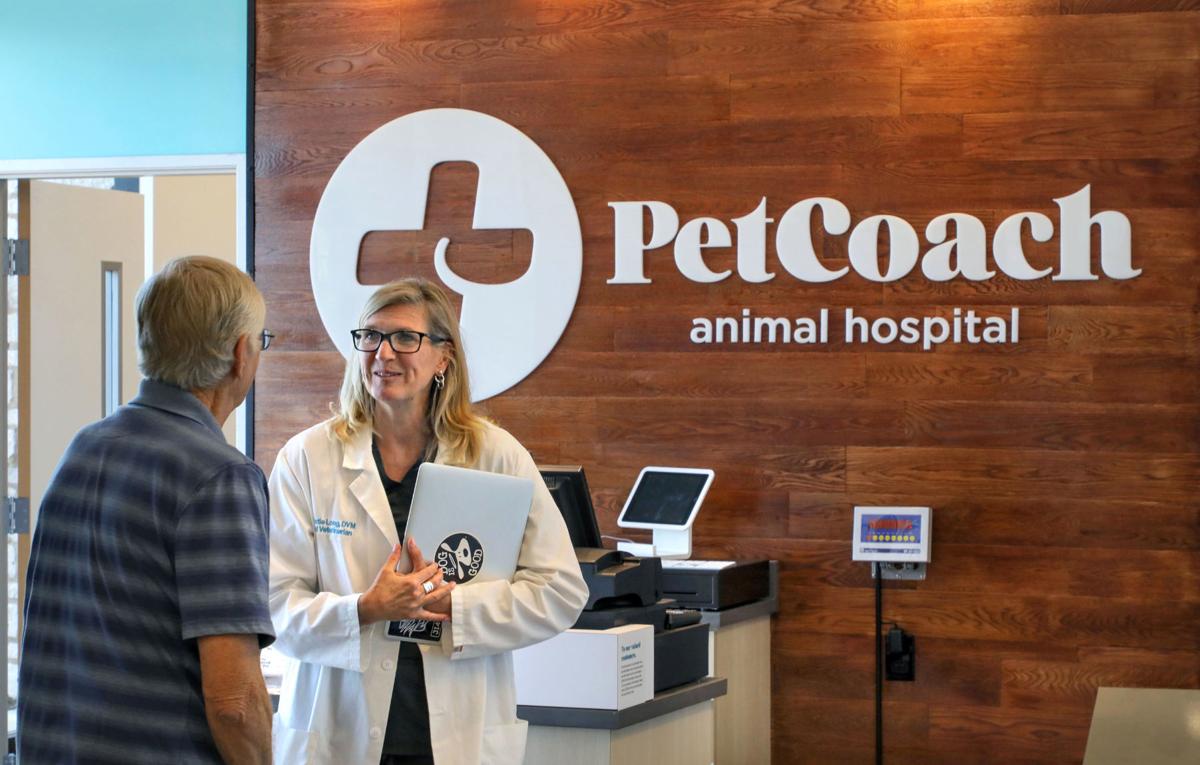 Veterinarian Christie Long speaks to a customer in the Animal Hospital of the new PetCoach store on July 13, 2018, in San Marcos, Calif.

SAN DIEGO — Leaving behind its big-box roots, Petco is opening a new kind of retail store where animal-friendly amenities such as dog baths, play yards and treats fit for humans are meant to win over picky pet parents who would otherwise snub the mainstream brand.

But here, instead of a smattering of products, shoppers will find that services such as veterinary care, grooming and dog day-care not only dominate, but dictate the entire experience. Food, clothing and toys are also available, of course, but they’re thoughtfully displayed by task, meaning customers should come for the care but find a relevant product — or five — in the process.

PetCoach is the brainchild of Brock Weatherup, a Petco executive who runs the firm’s new initiatives arm and who relocated to town from Philadelphia after his app with the same name was acquired in April of last year. When his company was purchased, PetCoach was just an app that presented people with a cheap way of getting their pressing pet questions answered quickly by experts. Now it’s taken on a physical life of its own.

“The whole premise of this was, could we bring this high level of education and validation all together … and make it physically viable?” he said. “So you would be excited to walk in and go, ‘This doesn’t exist anywhere else.’”

Rather, PetCoach looks like this: Upon entry, customers will see the animal hospital on their left, where resident veterinarian Dr. Christie Long presides over a clinic that can handle 90 percent of standard vet services, save for surgical emergencies. To the right is the grooming section visible to curious onlookers, along with an adjacent self-wash room with all the amenities that allow for a proper dog bath. In the center, a full scale dog day-care and training facility is the place where Fluffy can be watched and taught to mind her manners.

Plus, toward the back of the store, a curated selection of vet-vetted food is punctuated by a JustFoodForDogs pantry. The refrigerated section represents the first fruits of an extensive human-quality food partnership announced in May with Los Alamitos-based JustFoodForDogs.

If the San Diego-based firm succeeds in its mission, pet parents will subscribe to a new model at PetCoach where a $9 monthly membership, inspired by REI’s co-op program and Amazon Prime, will net customers discounted goods and services — and secure their repeat patronage.

The membership model is a fresh idea meant to help Petco navigate its way through a pet-product industry that’s become bifurcated, where boutique shops have won over discerning customers and bargain-hunters are opting for better value from the likes of Amazon, PetSmart’s Chewy.com, or Walmart.

“Look, I think we’re catching up on some things,” Weatherup admitted.

The company, he said, is now trying to get up to speed digitally (launching store pickup for online shoppers, for instance) and leapfrog its competitors simultaneously. The latter is where the mostly unrecognizable Petco concept store comes into play.

In fact, the roughly 12,000 square-foot PetCoach location has so little in common with a traditional Petco store that you might enter and exit without realizing that the Rancho Bernardo-based company is behind the retail endeavor. That’s by design, said Miro Copic, a San Diego State University marketing lecturer who inspected the location during its soft opening.

“Not having a direct link to Petco, that’s a great way to get people who shop at PetSmart or boutique stores to try this out,” he said.

In other words, PetCoach is for the pet snobs, the growing number of people who refer to their animals as fur babies or members of the family, and who are willing to pay a markup for quality over quantity. Presumably, that starts with buying better food.

“Interest in high-end, premium pet food and treats continues to be a key driver for increased spending in the pet-food category,” the American Pet Products Association, a trade group for pet-product manufacturers, found in its annual pet-industry report.

That helps justify the JustFoodForDogs tie-in at PetCoach’s inaugural store. Plus, Petco’s bet is that the more judicious food buyer will want more regular vet checkups, particularly since the membership program comes with five included visits.

He or she may then take an interest in regular dog care, whether that’s frequent walks booked through PetCoach’s also-new dog-walking app, or a visit to the day-care facility. And because a self-wash costs just $2 for members, a bath seems like the inevitable next step.

“It’s a clever solution … for a business model that has been killed by (the competition),” Copic said.

Still, nothing is permanent at PetCoach. The pilot store will very much serve as a training ground for fresh ideas and a graveyard for bad ones, Weatherup said.

“What has launched today will not be the same thing (you see) a year from now,” he said, referring to the store as a learning lab.

As it stands, Petco has plans to open two additional PetCoach venues in San Diego County over the next six months, and possibly more around the country, depending on their reception. So, love it or hate it, PetCoach is ground zero for the embattled retailer.

The grimiest item in your kitchen you don't wash enough

The grimiest item in your kitchen you don't wash enough

Could jellyfish and chips be the next weird dish you try?

Could jellyfish and chips be the next weird dish you try?

Get a dose of adorable in your inbox

Receive local adoptable pets PLUS updates for pet lovers in your inbox every week!

Six pet owners told CNN their dogs have gone missing or died while in care of a sitter they found on the Rover platform since the start of the pandemic.

Pet-Friendly Hotels You May Not Have Heard Of

Only one thing makes heading out on a road trip better--bringing your beloved pet along! Of course, you’ll need a pet-friendly place to stay along the way. You could just book your same-old, tried-and-true places . . . or, you could make it a true adventure and try something new! Hotels are increasingly welcoming pet guests these days, and there are lots of options to choose from--some of which you may never have heard of!

When times are “tough” -- and even when they’re not, it’s always nice when you can save a dime or two.  While many of us are itching to get away with our pet, others may have to due to a move, family matter, or other obligation. Whatever the reason for travel, it doesn’t have to break the bank if you plan ahead and find the right accommodations for your budget.

After ‘pandemic pups,’ many veterinary clinics are overwhelmed and overbooked

One way many Americans coped with the pandemic was by adopting a furry friend. But the large number of adoptions and more owners being home with their pets and noticing routine health issues has meant a flood of people making vet appointments.

Sprocket gets groomed by Nicole Pierce, at left, while Lucille gets groomed by Crystal Brown in the Grooming Salon of the new PetCoach store in San Marcos, Calif., on July 13, 2018.

Veterinarian Christie Long speaks to a customer in the Animal Hospital of the new PetCoach store on July 13, 2018, in San Marcos, Calif.