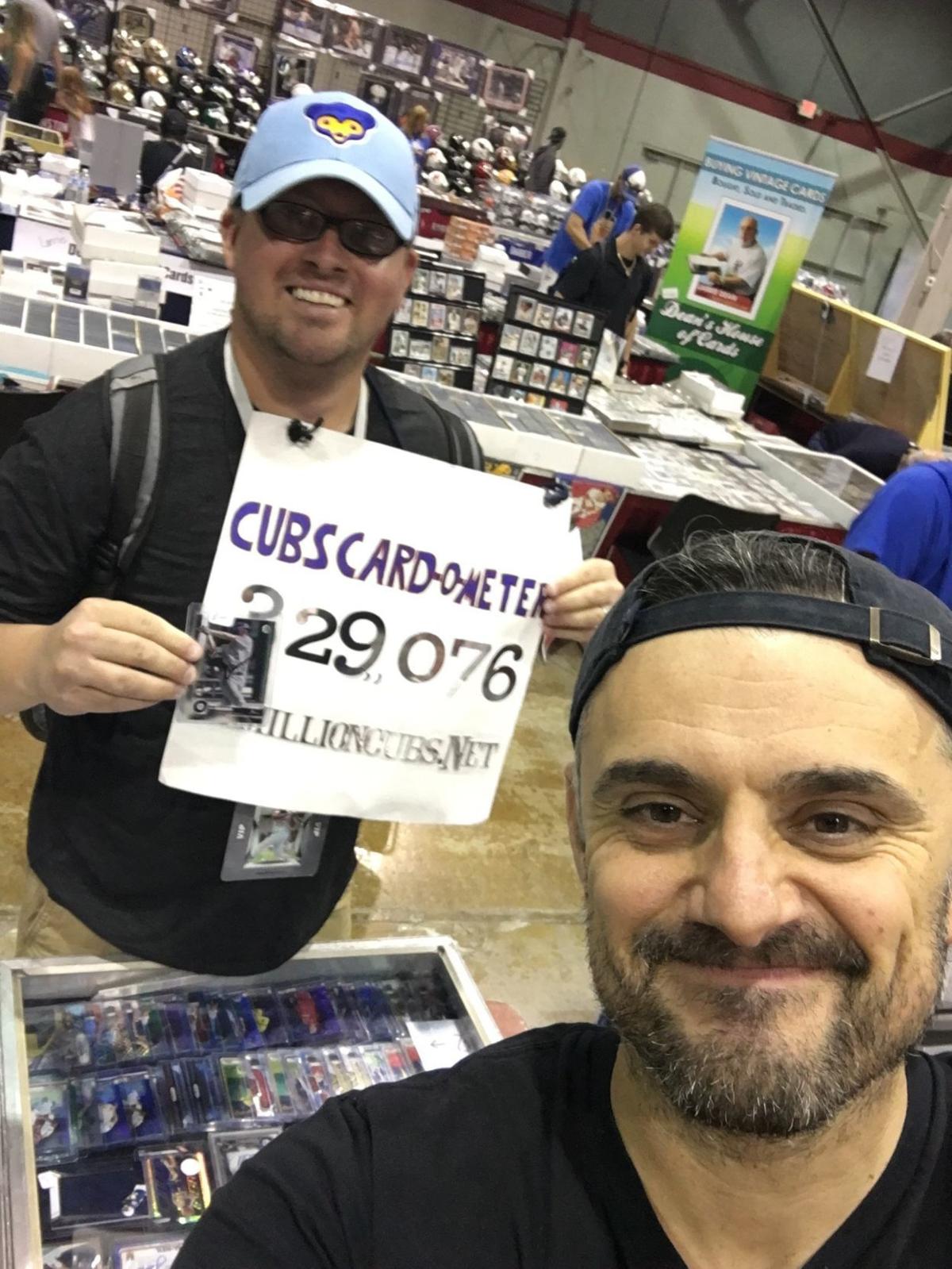 Annawan native Beau Thompson, in back, is chasing the dream of collecting 1 million Chicago Cubs baseball cards. At the recent National Sport Collectors Convention in Chicago, Thompson updated his Cubs Card-O-Meter each day. The Cubs Card-O-Meter is a spinoff of the days when Cubs fans would update Shawon Dunston's daily batting average with the Shawon-O-Meter. Standing in the foreground is Gary Vaynerchuk, a social media entrepreneur.

This is the room in Beau Thompson's Wisconsin home that holds his growing collection of baseball cards.

Beau Thompson, Annawan native and one of life's really good guys, is.

His "Cubs Card-O-Meter" currently stands at over 332,000 and counting, meaning he's nearly one-third of the way to his goal of collecting 1 million Chicago Cubs baseball cards.

Thompson named the meter, which records the number of cards he has, after the Shawon-O-Meter, created by Cubs fans to track former Cubs great Shawon Dunston's daily batting average.

From Kris Bryant to Don Kessinger or from Tinkers to Evers to Chance, it doesn't matter. Thompson, a loyal Cubs fan, wants all Cubs comers for his One Million Cubs Project (onemillioncubs.net).

He understands a challenge, and his resume proves he is not afraid of working hard to be successful.

"Things are going really well right now with the project,'' said Thompson, who as a youngster in the 1990s served as a paper carrier for The Dispatch and The Rock Island Argus newspapers.

"I don't have a target date for completing this task, but that's OK,'' he added. "The pace is up and down, but it has been good recently. Sure, it's work, but it's fun and a challenge that's interesting. It's neat in knowing there are so many like-minded types out there who have a passion for this kind of thing. You come across some amazing people.''

The 37-year-old Thompson began collecting sports cards in 1998, and he has over 2 million in his collection. His mother got him started by buying him a pack of Donruss baseball cards and a pack of Topps football cards.

His effort to collect 1 million Cubs cards began in December 2017, and he gathers the cards through trades and occasional purchases. One trade netted him over 30,000 Cubs cards.

"I have what some people need, and they have what I need,'' Thompson said with a laugh. "We work mostly through the mail, but I find myself responding to a variety of questions about how I do things via Twitter.''

Thompson has benefited greatly from national shows. And while there might be some doubters out there, response publicly to his chase has been positive.

"People have been encouraging and supportive,'' Thompson said in a phone interview earlier this week. "From those who have a stake in the collectible side of things to those who just think what I'm doing is neat, people have been great to deal with. What I have learned, though, is a million is a big number, and this was/is going to take some time.''

Space to store his vast collection is not an issue at this time, thanks to his ever-understanding wife, Amy. Thompson uses the family basement in the home he and Amy built two years ago.

"She's been great,'' Thompson said of his wife. "And I have tried to stay within the area that has been designated for the collection. I'm doing OK with that part. We do, however, have a storage closet in the basement that's supposed to be storage for stuff from the house, but my collection has taken over that area.''

Though he has yet to hear from the Chicago Cubs regarding his work toward a million Cubs cards, Thompson believes some people have reached out to the club.

"We have a website, and I have over 6,000 Twitter followers, so I believe someone has shared with them, but I have not,'' he said. "Maybe someday.''

A former Cubs player has reached out to Thompson. It happened after Thompson posted Twitter birthday greetings to former Cubs infielder Vance Law. Law then took it upon himself to send 10 signed cards Thompson's way.

"It was generous, and it was cool,'' Thompson said. "He didn't have to do that, but he took it upon himself to go beyond the gesture of just sending cards.''

A collection of cards he bought off Craigslist included some nonsports cards, and one of them, a "Close Encounters of the Third Kind'' card, had a piece of gum stuck on it. After taking a photo of the card with the gum and posting it on Twitter, Thompson heard from someone who wanted to make a deal for the card with the gum attached.

"He sent me Cubs cards, and I sent him a 40-year-old piece of gum,'' Thompson said of the exchange. ''I had no attachment to it, but he apparently collects pieces of gum. It worked for both of us.''

Could the future possibly hold more than a million Cubs cards?

"I don't know, but right now I'll stop at a million,'' Thompson said. "Who knows what will happen after that.''

Whatever it is, if Beau Thompson's involved, it will be a cool chase.

MARX: On the brink of death: Milan man now on the mend from baffling COVID-like illness

MARX: Six decades of serving, Father Mirabelli is one of a kind

Out of love and respect, his voice stops you flat in your tracks.

MARX: We all have a hideaway/getaway joint we're missing

There isn't much special about it.

MARX: Blake Snell is a fool

I now have Jack Nicholson hair, so I have tossed in the towel

Annawan native Beau Thompson, in back, is chasing the dream of collecting 1 million Chicago Cubs baseball cards. At the recent National Sport Collectors Convention in Chicago, Thompson updated his Cubs Card-O-Meter each day. The Cubs Card-O-Meter is a spinoff of the days when Cubs fans would update Shawon Dunston's daily batting average with the Shawon-O-Meter. Standing in the foreground is Gary Vaynerchuk, a social media entrepreneur.

This is the room in Beau Thompson's Wisconsin home that holds his growing collection of baseball cards.