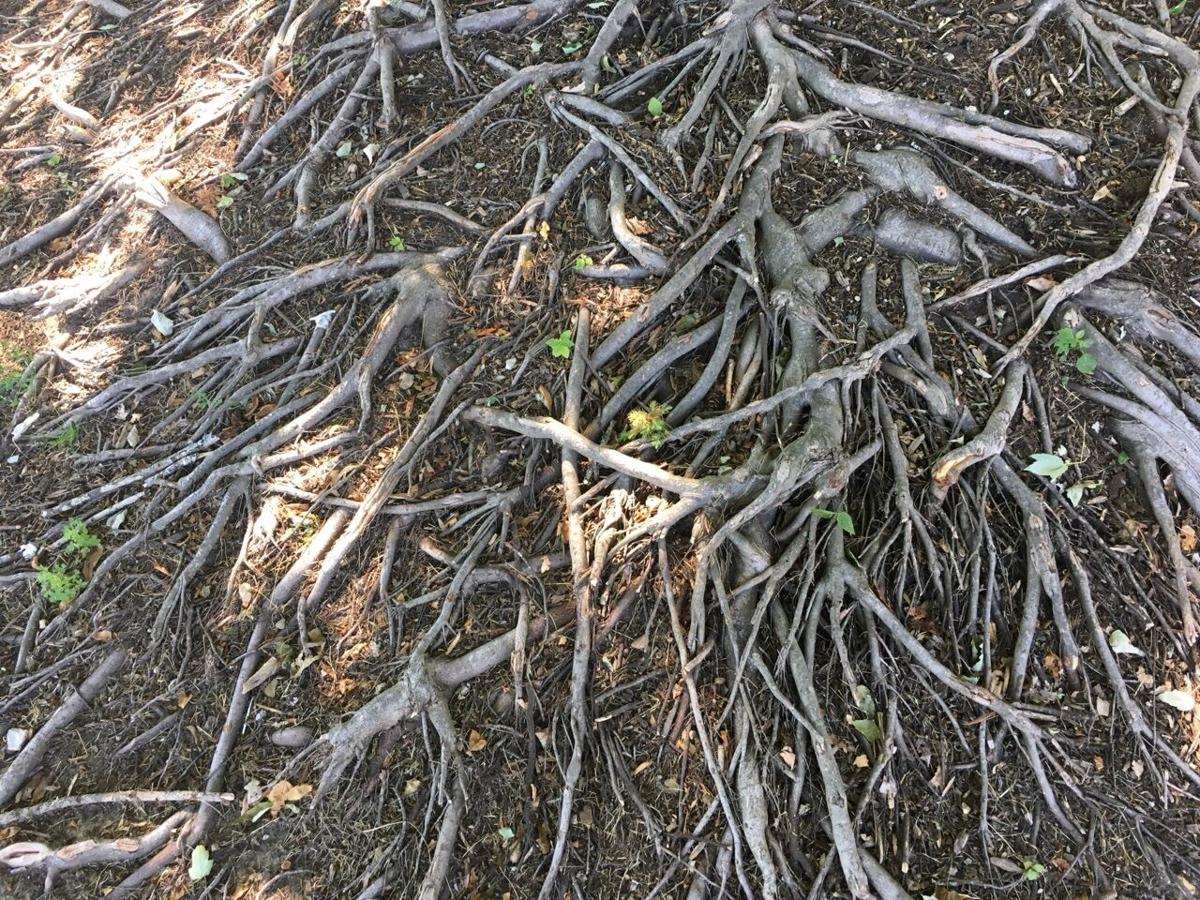 Tree roots spread like a river delta under a maple at the Hauberg Civic Center, Rock Island. 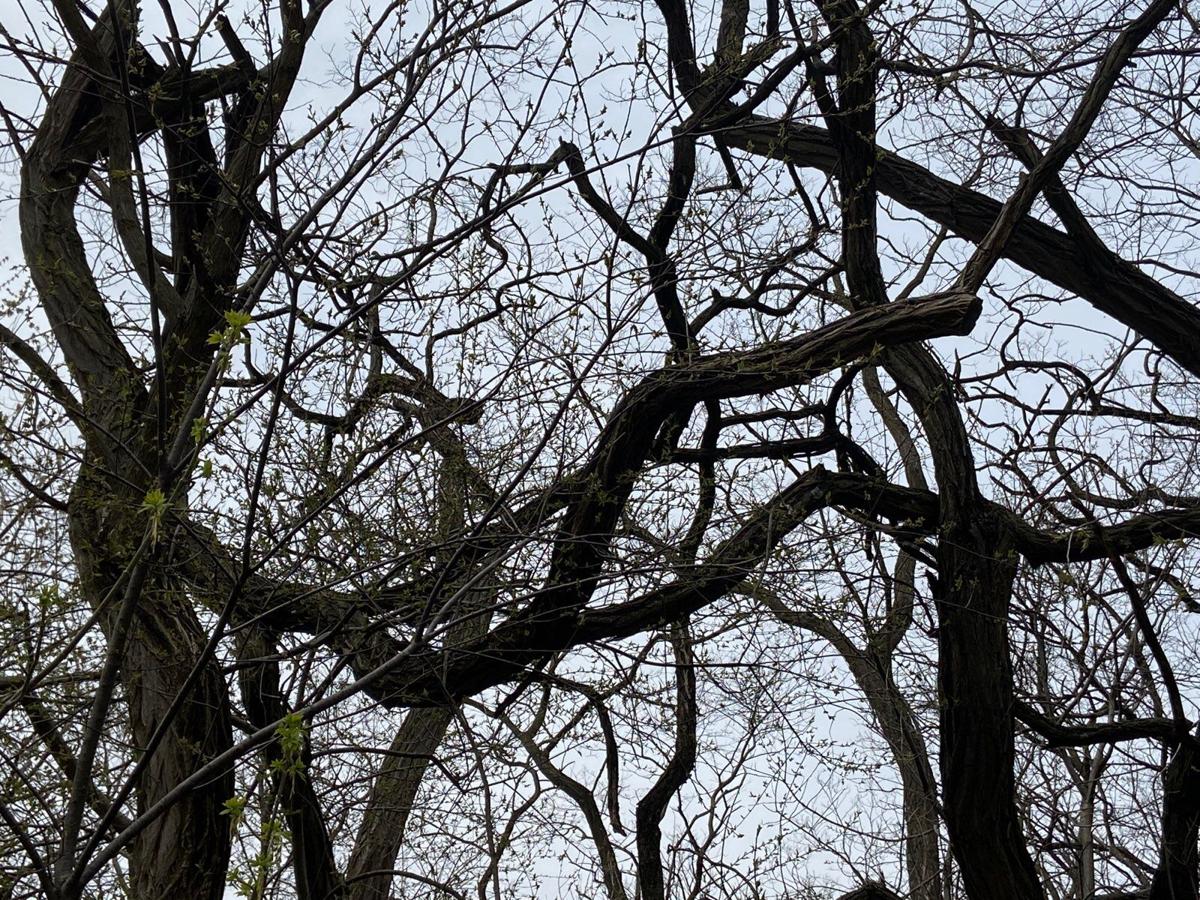 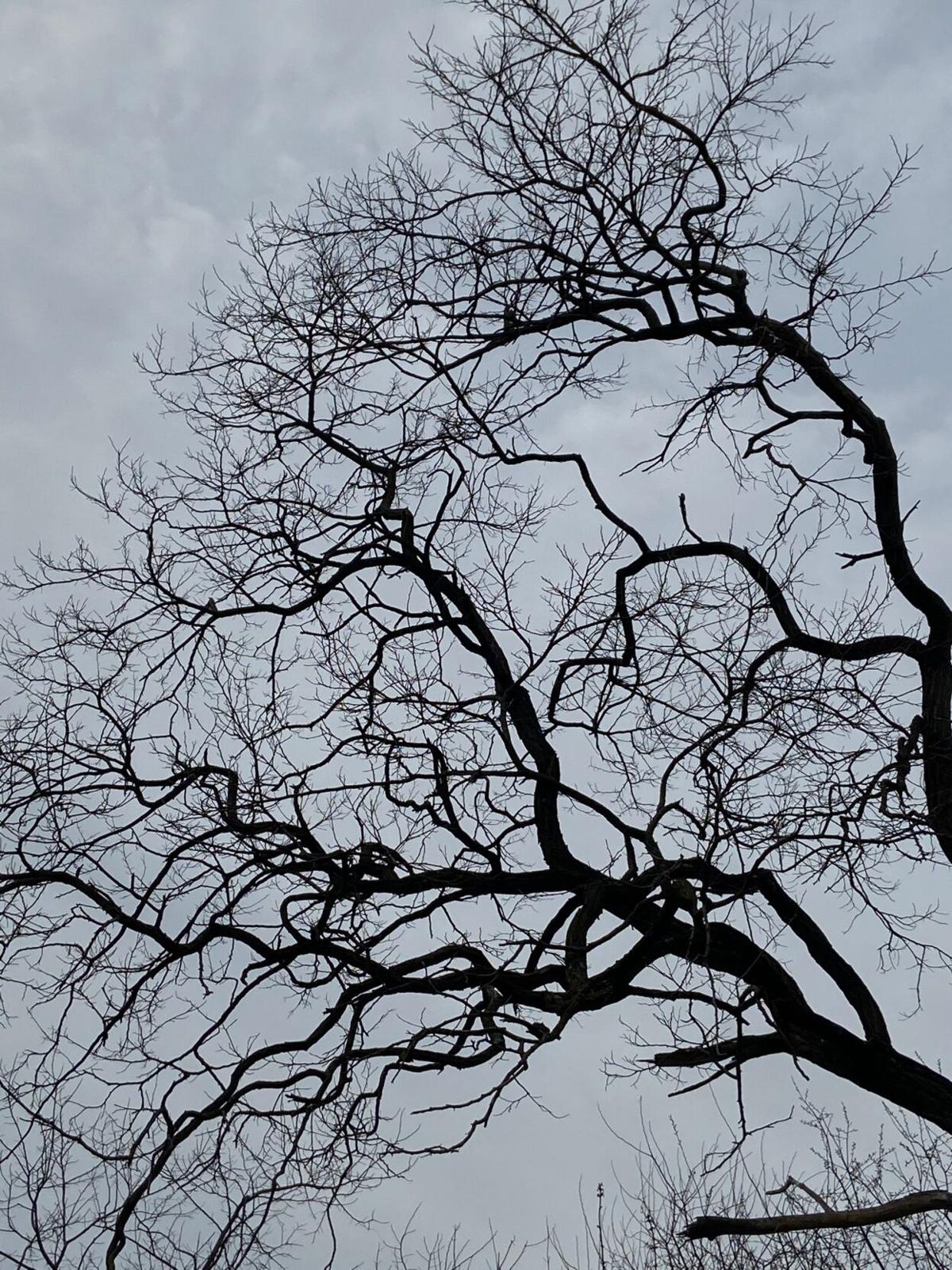 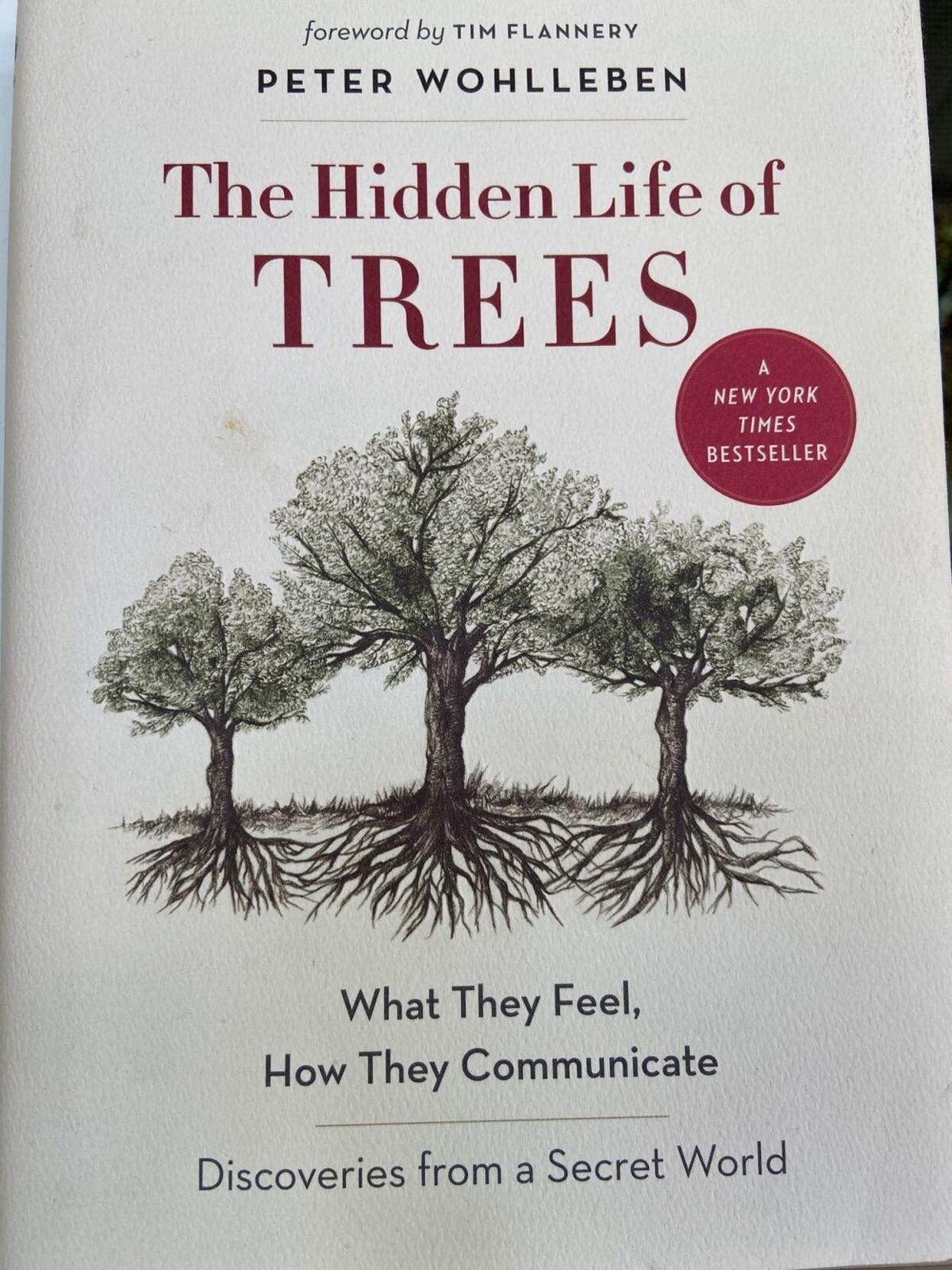 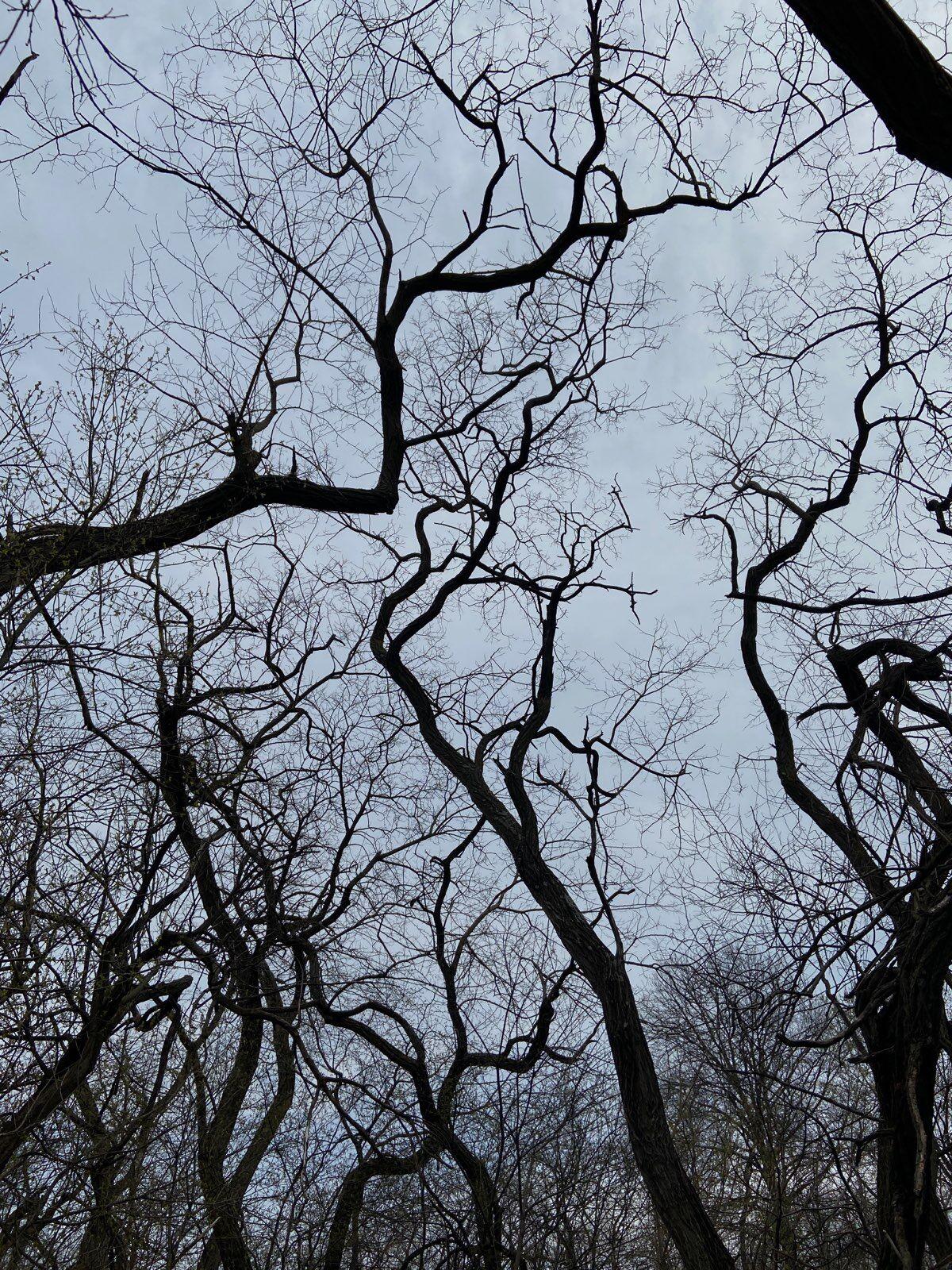 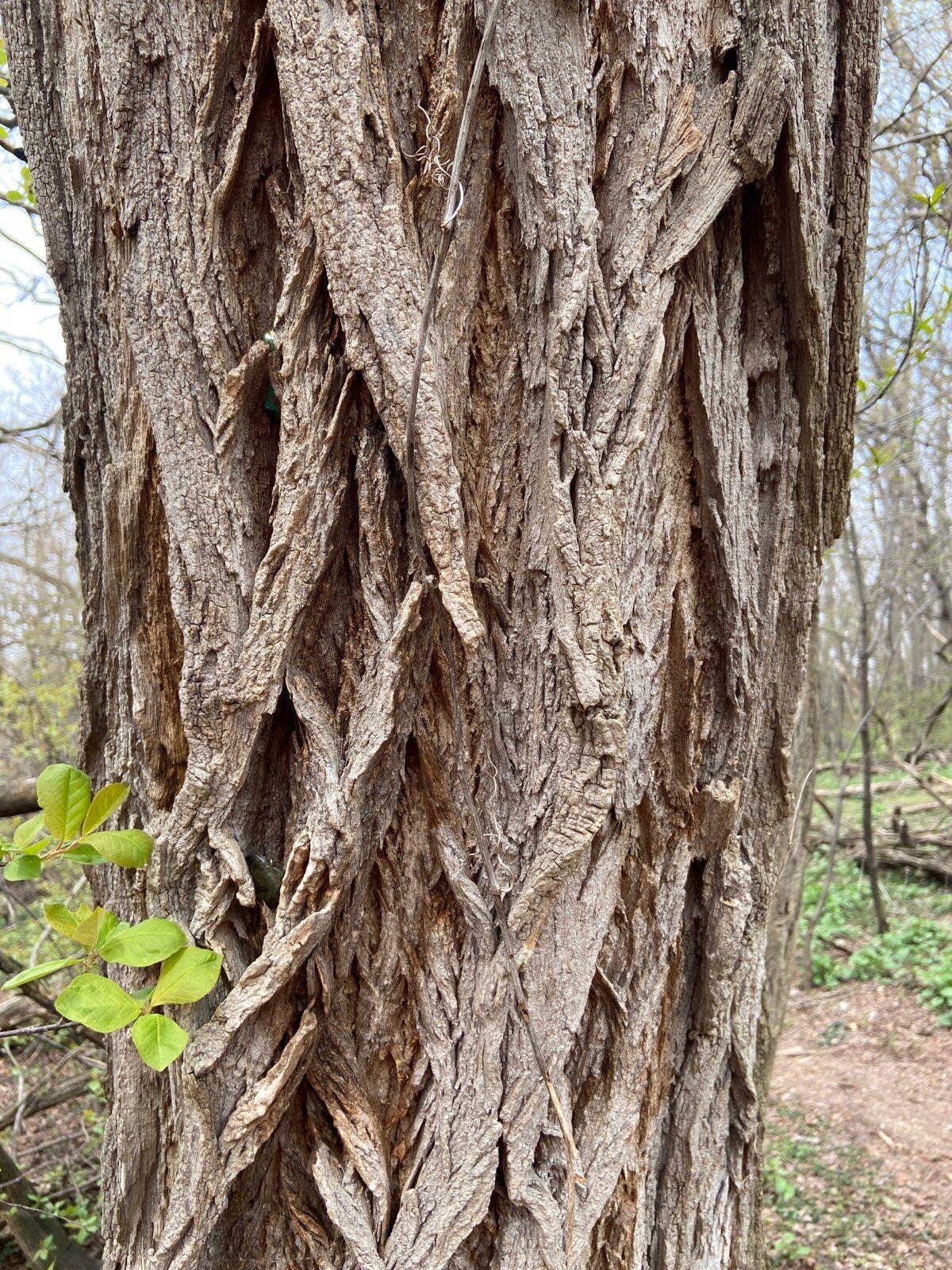 The bark of a tree protects the layer of growth underneath that conveys nutrients and water up and down through capillary action, osmosis and transpiration. But Peter Wohlleben, who wrote "The Hidden Life of Trees" isn't sure those processes account for all the movement. 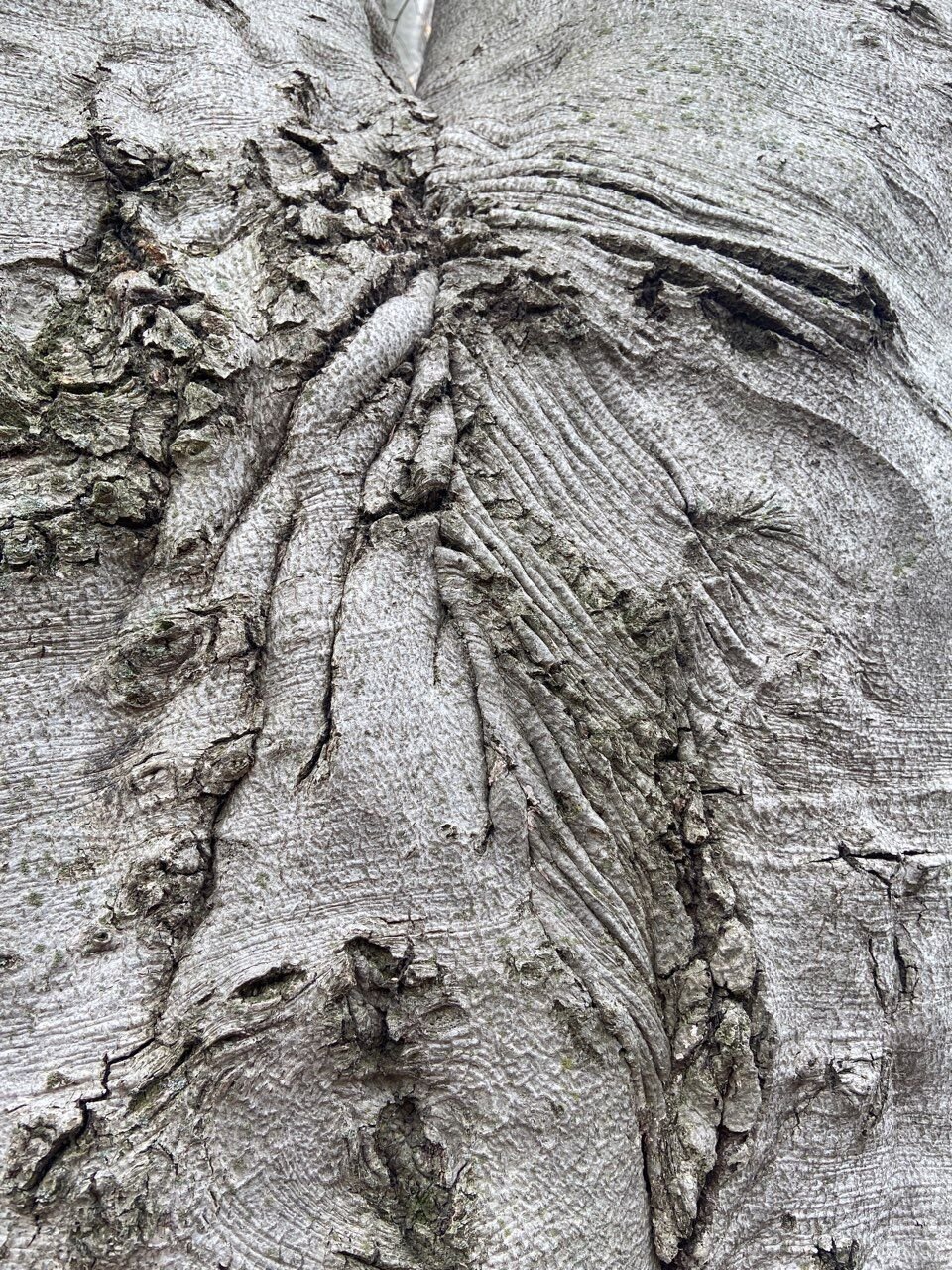 The bark of a beech tree in Davenport's Duck Creek Park folds over itself. 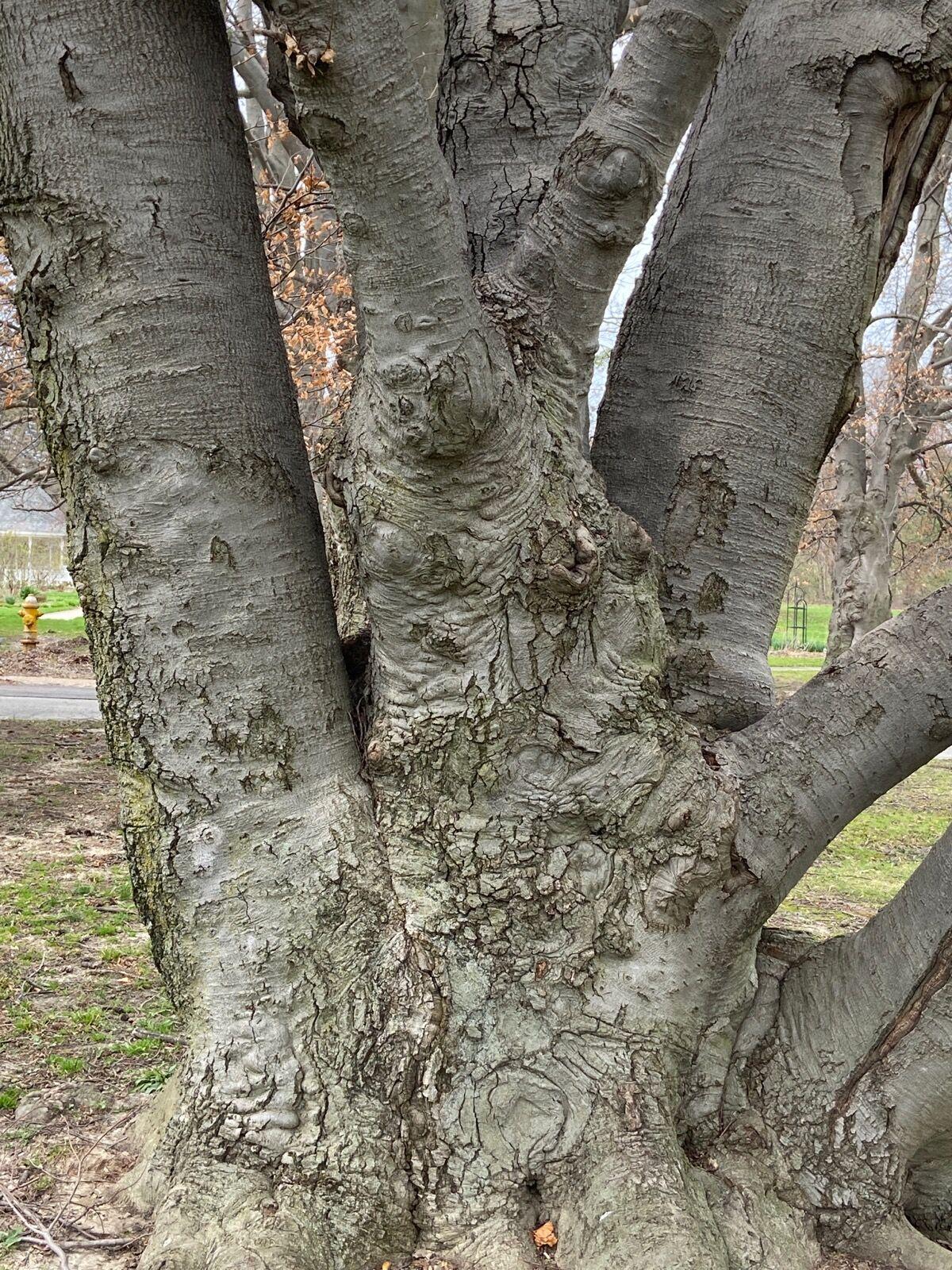 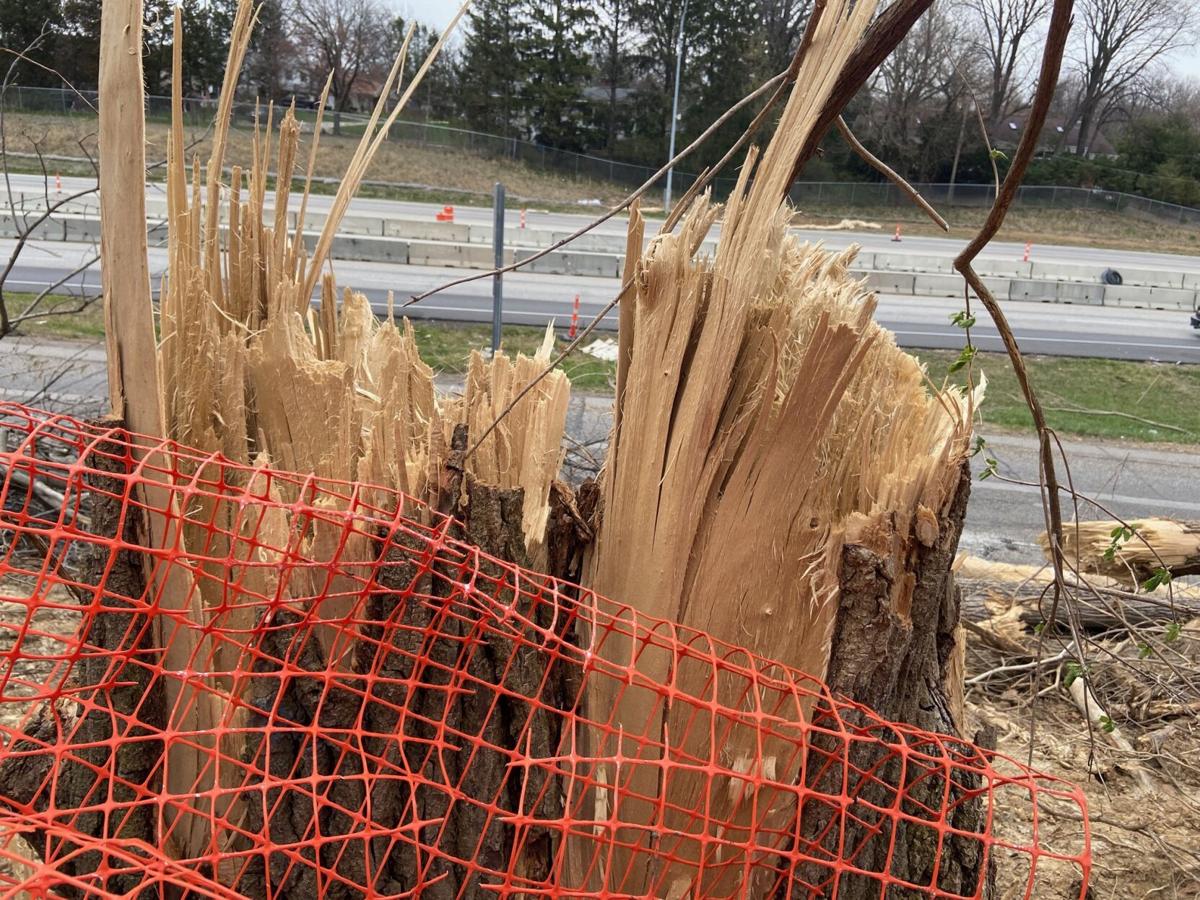 A long row of trees along the last Iowa exit heading into Illinois on Interstate 74 has been torn down as part of the new Interstate bridge and road widening project. Many of the trees were black locust that bloomed with with flowers in the spring.

Human beings have no trouble accepting that animals can communicate with each other.

But plants? That's something else entirely.

Still, as scientists study what goes on underneath the surface of the ground, they have discovered a living substance called mycelium — a mass of interwoven fungal filaments — that associates with, and exchanges substances with, the roots of trees.

Scientists describe this exchange of substances, such as water and nitrogen,  as communicating.

This communication idea received a big boost in 2015 when German forester Peter Wohlleben laid out his research in a book titled, "The Hidden Life of Trees: How they feel, how they communicate. Discoveries from a secret world."

Originally, only 2,600 copies were printed, but much to his amazement, the book kept selling and, in translation, became a New York Times bestseller. Apparently readers found the idea of tree communication intriguing.

And what Wohlleben reported profoundly changed how many people think of trees and forests.

Some readers have difficulty with Wohlleben's book because in an attempt to bring to life what otherwise would be dry, scientific terms familiar only to scientists, Wohlleben personalizes trees and the reactions among them.

In trying to make concepts understandable to lay people, he uses anthropomorphisms — that is, he ascribes human characteristics to plants, writing about how a tree "feels" and its "emotional life."

This can turn people off, and that's too bad, says Rafael Medina, an Augustana College professor of biology.

"You don't have to make it fantastic; it's fantastic enough already," Medina said of the mycorrhizal communication underground.

Both Medina and colleague Jason Koontz very much defend Wohlleben's basic premise. There is a lot going on underground between trees, between plants, that humans  are still learning about, they said.

So how do trees share information? In a TED Talk, Canadian scientist Suzanne Simard explains that it occurs through chemical messages, electrical impulses and the language of carbon, nitrogen, water and hormones.

And, depending on the information, other roots respond. Two-way communication.

As an example, Wohlleben says in his book that "if a root encounters toxic substances, impenetrable stones, or saturated soil, it analyzes the situation and transmits the necessary adjustments to the growing tip.

"The root tip changes direction as a result of this communication and steers the growing root around the critical areas."

Similarly, if a tree is attacked by an insect, it feels pain and will pump poison to kill the insect. But because trees are so very, very slow they cannot always keep up with infestations of new, invasive insects.

Mother trees send food to young trees. Trees in the forest are not competitors, they are cooperators.

"Trees are very social," Wohlleben says in one of the many interviews he gave about his book, interviews now available on YouTube. "They care for each other. They try to support each other."

As for emotions: "As human beings we need social structure to feel well." Trees, he maintains, need the same. "When you discover trees, it's like looking in a mirror."

"Trees count, remember, learn. I don't 'claim' this, this is actual research. Scientists use language that people can understand. Trees are social, trees have feelings. They suckle their children (new trees) with a sugar solution. They talk to each other."

Augustana's Koontz said the study of communication among plants began around the 1990s.

Now there is an entire field of study dedicated to the rhizosphere, defined as the region of soil in which the chemistry and microbiology is influenced by the growth, respiration, and nutrient exchange of plant roots.

Medina said research has shown that plants "retain some sort of information and use it for their advantage in the future." Then added, "We need to stretch our concept of memory."

"Intelligence? Intelligence would go too far in the moment," he said.

Who knows what further research will show?

"When the capabilities of vegetative beings becomes known, and their emotional lives and needs recognized, they way we treat plants will gradually change."

One of the issues Jason Koontz and Rafa Medina struggle with as professors of biology at Augustana College is the idea of "plant blindess." That is, we as humans are surrounded by plants, but we don't really see them for the wonders — and the life-giving properties — they provide.

This goes for students and the general public.

Generally, people are more interested in animals and don't give plants their due as crucial to the ecosystem. Not only do they provide oxygen, but plants support our lifestyles.

Wood from trees provides the framework of our homes and fruits of plants provide all manner of food and drink — fruits and vegetables and hops for beer, grapes for wine, coffee for, well, coffee.

Up until about third grade, children seem to have a sense of wonder about plants and they readily absorb knowledge about them. But from then on, that wonder and knowledge erodes.

"Sophomores and juniors in college are no different than third graders when it comes to plants," Koontz said.

So, in their teaching, Koontz and Medina try to correct that and better engage students with the plant world.

"We need plants not only to survive but to make life enjoyable. Our lifestyle is threatened because plants are threatened," Koontz said.

'We need to hear these poor trees scream'

The April 17 issue of the journal Science reviewed 10 years of research on tree mortality, concluding that forests are in big trouble if global warming continues at the present pace.

Tim Brodribb, a plant physiologist at the University of Tasmania, led a recent study that helps identify when, where and how trees succumb to heat stress.

"With a microphone, he says, you can hear trees take their last labored breaths. During blistering heat waves and droughts, air bubbles invade their delicate, watery veins, cracking them open with an audible pop," according to an article in InsideClimate News.

"And special cameras can film the moment their drying leaves split open in a lightning bolt patterns, disrupting photosynthesis.

"'We really need to be able to hear these poor trees scream,'" he said. "These are living things that are suffering. We need to listen to them.'"

"It's our choice of how much worse we want it to get. Every little bit of reduction of warming can have a positive effect. We can reduce the tree die-off. Are we going to make the choices to try and minimize that?"

At the current pace of warming, much of the world will be inhospitable to forests as we know them within decades, he says. The extinction of some tree species by direct or indirect action of drought and high  temperatures is certain.

"We have to establish the consequences of rising temperatures unequivocally for policy makers," he said.

The stakes are high, since trees are the foundation for terrestrial biodiversity and because they capture and store about one-third of human-caused CO2 emissions within their dense wood frames.

With our home & garden newsletter!

Q-C gardens gone but not forgotten

Ask people how they got interested in gardening, and many will cite the nurturing influence of a grandmother, grandfather or other relative.

It's the perfect addition to your home bar.

How to get rid of fruit flies

It's time to ban this annoying summer pest.

Buying Guide: Beat the heat with this extra-large inflatable pool

No public pools, no problem. 🏊‍♀️

This wireless fence will keep your dog from escaping

Keeping your dog from running into the street or getting lost after leaving your yard are major concerns for pet owners, but building a fence isn’t always simple. Neighborhood codes may specify certain types of fences, and costs can be prohibitive. Electric fences can pose their own problems, since most models need to be buried under the perimeter of the yard.

Look closely — you may be surprised how much lavender you see.

Buying Guide: This affordable telescope is the perfect educational activity for families

Bring the planetarium to your backyard.

They say a penny saved is a penny earned. Only it takes more than good fiscal sense to save spare cents these days — especially if you finance…

4 ways to charge your phone easily

Our phones do much more than call and text. They allow us to check our email on the go, play music during a long drive, watch movies on plane trips, look up any question, and play games on bus rides. But all these functions drain the battery, and there’s nothing worse than being stuck with a dead phone when you need it most. These products make it easier than ever to charge your phone.

Tree roots spread like a river delta under a maple at the Hauberg Civic Center, Rock Island.

The bark of a tree protects the layer of growth underneath that conveys nutrients and water up and down through capillary action, osmosis and transpiration. But Peter Wohlleben, who wrote "The Hidden Life of Trees" isn't sure those processes account for all the movement.

The bark of a beech tree in Davenport's Duck Creek Park folds over itself.

A long row of trees along the last Iowa exit heading into Illinois on Interstate 74 has been torn down as part of the new Interstate bridge and road widening project. Many of the trees were black locust that bloomed with with flowers in the spring.