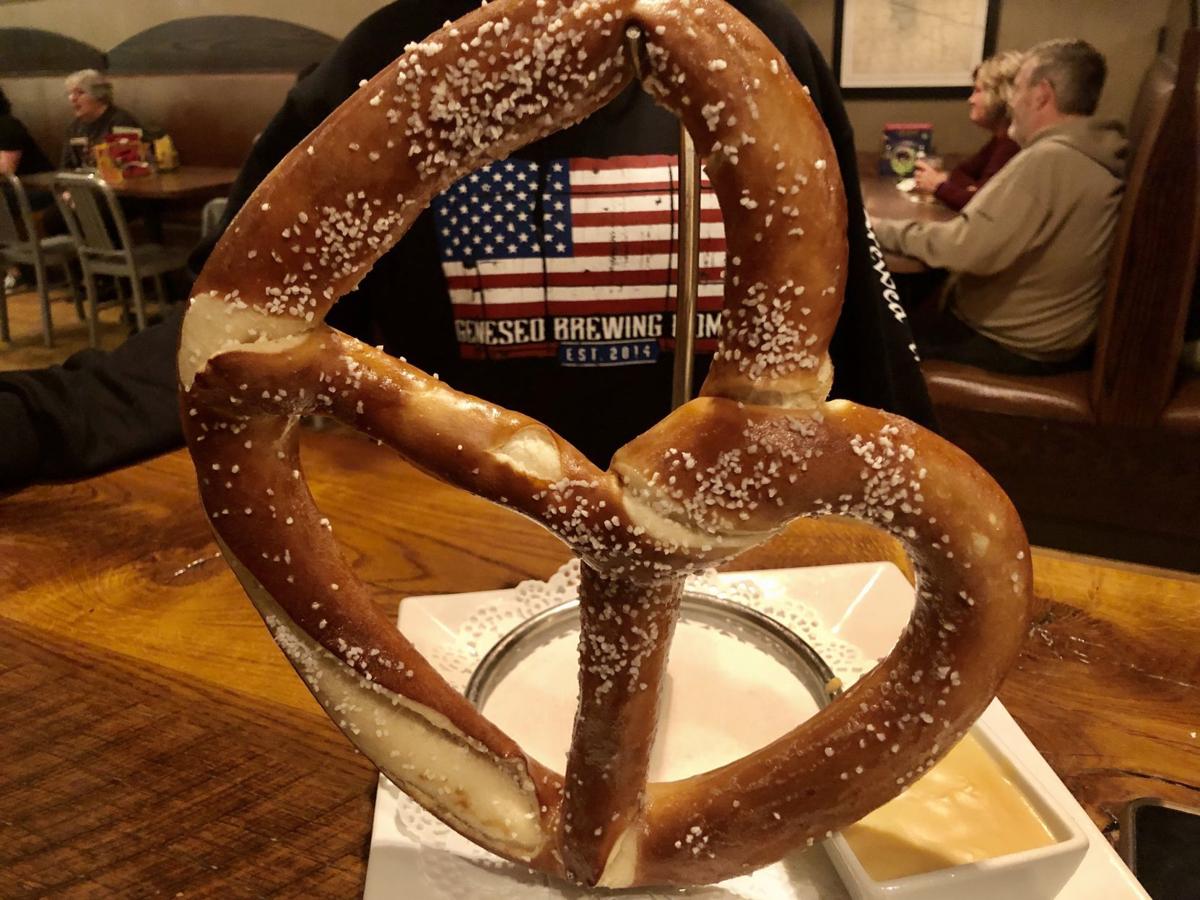 The large Bavarian pretzel hangs from a large stand and is served with homemade beer cheese for dipping at Geneseo Brewing Company in Geneseo. 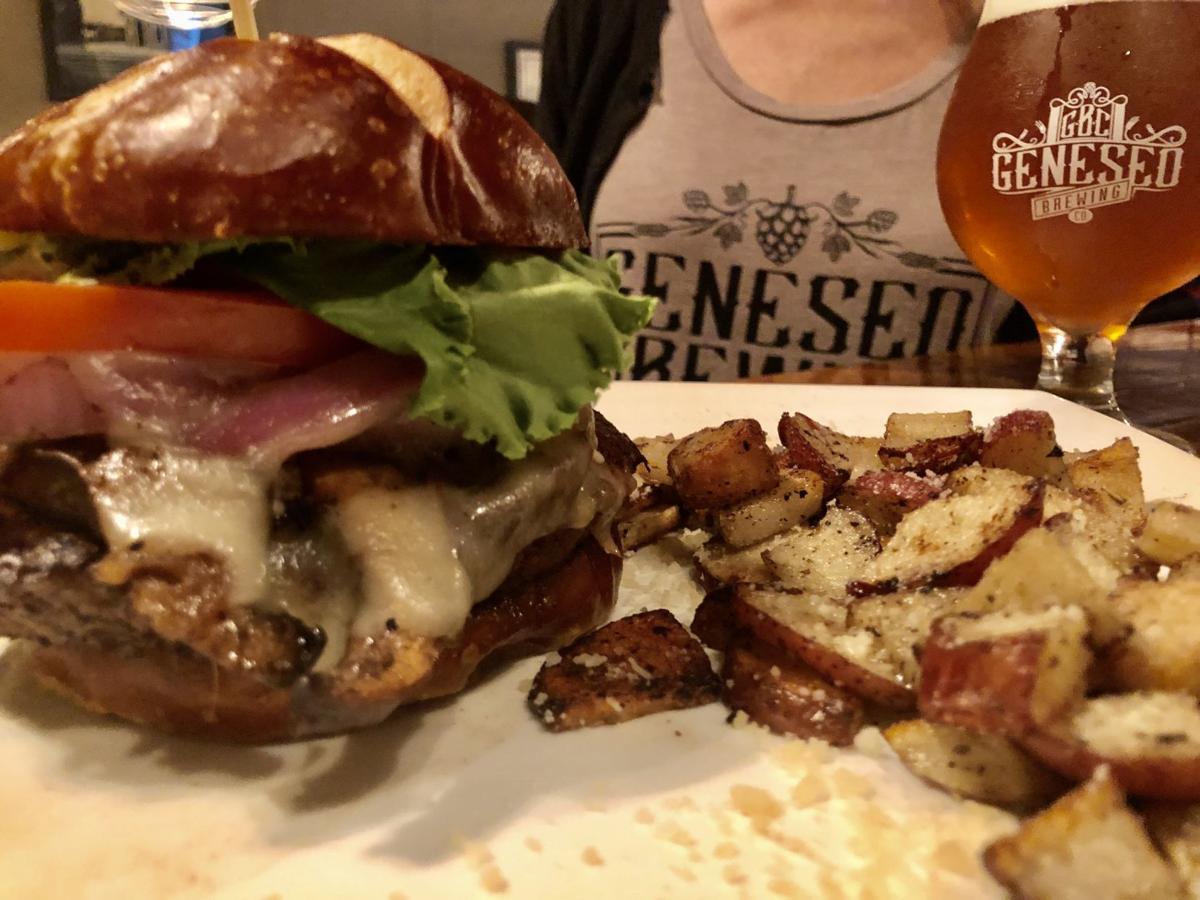 The Jack and Bleu Burger at Geneseo Brewing Company in Geneseo features Monterey jack and blue cheeses, sauteed portabella mushrooms and onions on a pretzel bun. 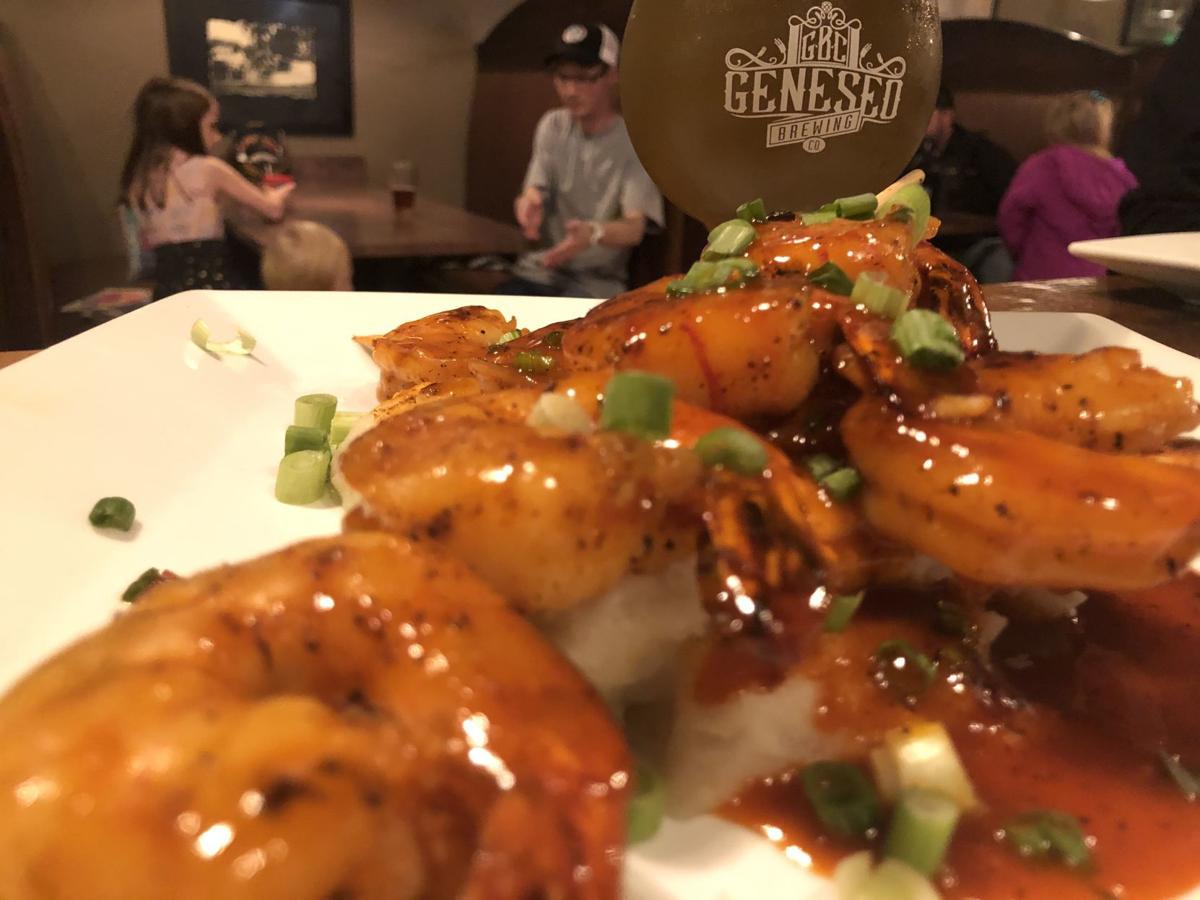 This is the Honey Buffalo Shrimp served at Geneseo Brewing Company in Geneseo. 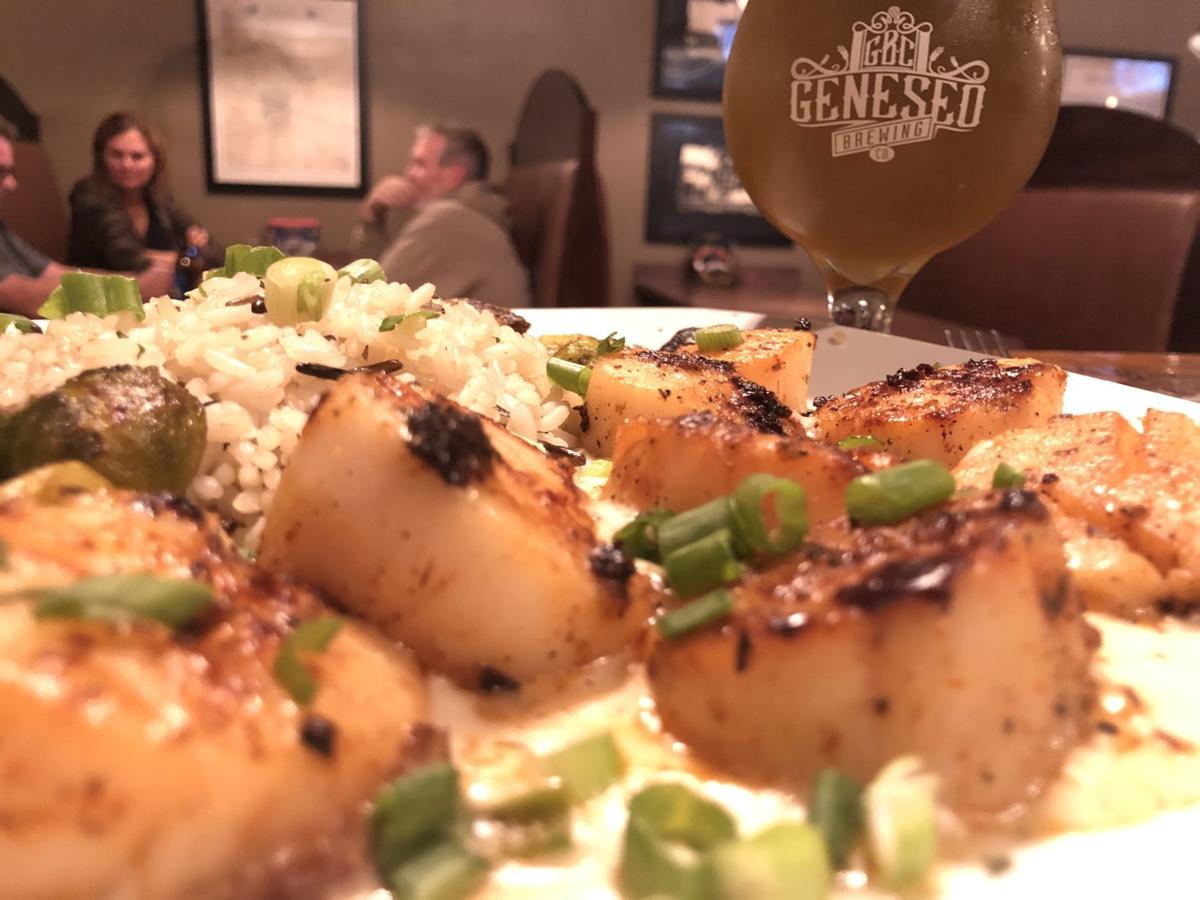 The scallops are served with polenta at Geneseo Brewing Company in Geneseo. 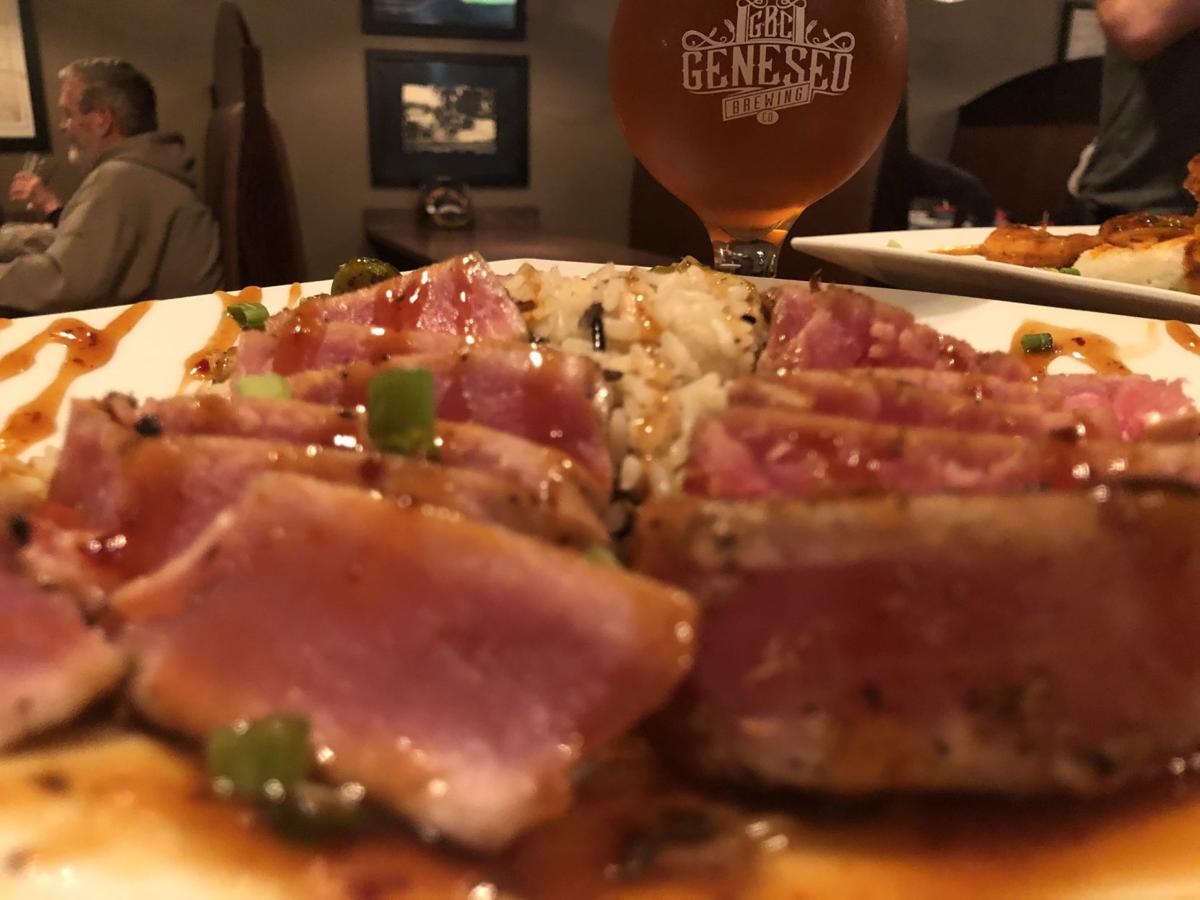 Medium-rare tuna is served with mashed potatoes at Geneseo Brewing Company in Geneseo.

Having just returned from Oktoberfest in Germany, we were thirsty for good craft beer and hungry for good food. Not that the liters of Marzen-style beer we enjoyed there were bad, but it was the only style of beer being served. And while we enjoyed the brats, red cabbage, broasted chicken and schnitzels we dined on, we craved a little variety.

We knew just the place to visit to soothe our jet lag and diminish our cravings — Geneseo Brewing Company (GBC) in downtown Geneseo.

Food holds equal status with beer at GBC. What began as a taproom has evolved into a wonderful restaurant that serves food to pair with excellent craft beer.

Unplanned adventures in life are often the best ones. No one knows this better than the owners of GBC, Jerrod and Andrea Minnaert. Jerrod is a lifelong farmer in the Geneseo area who has a head for business that complements Andrea's creative side.

On Thanksgiving Eve 2010, they opened Raelyn's Pub and Eatery, located a block and a half north of GBC. Andrea "just happened" to run an errand in town at the time the building was going to be auctioned. Stopping by to "just see" what it was going for, she found herself buying the former bar.

With nine months of hard work, they transformed the rundown building into a picturesque pub that has been a great addition to the north end of downtown.

The back room at Raelyn's is a popular meeting spot for local clubs. In 2012, the local homebrew club began holding its monthly meetings there. Jerrod's curiosity was piqued, and he soon went from bystander to member.

Then Jarrod thought, why homebrew when he could own a brewery? As the idea began to ferment, he enlisted one of the founders of the club to be his brewer and bought what was originally the City Meat Market in central downtown Geneseo.

When GBC opened in August 2015, it served what it was known for — beer. Good beer. The original recipes of its first brewer, Scott Welch, include Yep Yep, an American IPA; Geneseo, a blonde ale; and Squirrels Nuts, a peanut butter porter. They are always on tap, in addition to seasonal and specialty brews. GBC wouldn't be where it is today without Scott.

The current brewer, Glenn Cole, came to GBC from Bent River. He has added his own creative touch while maintaining the high quality of brews that GBC already was known for. Glenn primarily uses six hops from a Wisconsin farm in his beers.

A sour, 30 Years in Montauk, received rave reviews from the person sitting next to us. Ogres Have Layers, a lactose IPA brewed with milk sugars and a hint of vanilla, had a creamy, full-bodied sweetness and the punch of late-addition hops. We really enjoyed the Pumpkin Pie Ale. It tasted just like liquid pumpkin pie.

GBC also has some of the best food Geneseo has to offer. The first menu item was pretzels. Then pizzas and calzones from Raelyn's up the street were added, and in 2016, a small kitchen at GBC started turning out a few appetizers, salads and sandwiches.

The transformation from beer taproom to an amazing restaurant is part of the adventure the Minnaerts saw as an endgame. In September of 2017, they hired Lisa Dixon, who was previously part of the team in the kitchen at Biaggi's. She took the basic menu and turned into a menu packed with upscale/casual fare.

The dinner-size salads include an Apple Pecan Chicken with Romaine and iceberg lettuce, grilled chicken, apples, mandarin oranges, pecans, dried cranberries, and a raspberry vinaigrette for only $8.

The wraps are all $8 and a favorite of many is the Chicken Bacon Ranch. Flatbreads include the Peach Pulled Pork Flatbread, and we enjoyed the Cuban in the sandwich section. The burgers are all half-pounders. Forever fans of blue cheese, we had the Jack and Bleu Burger, which features Monterey jack and blue cheeses, sauteed portabella mushrooms and onions on a pretzel bun. Definitely better than a bratwurst!

In the starter section of the menu, we chose the large Bavarian pretzel, as we reminisced over our experiences at Oktoberfest. It was larger than anything we had overseas. It's served hanging from a large stand, along with homemade beer cheese for dipping. You will need to share it with friends or plan on taking some home for breakfast.

We enjoy going to GBC for the dinners, all priced under $15. Why not pair a good beer with seafood? The special that evening was scallops served over creamy polenta. We could not believe how tender the perfectly seared scallops were. They rivaled any that we have had in the Quad-Cities area. The medium-rare tuna is another occasional special, and it's Jerrod's favorite. It was delicious and definitely a surprise at a brewery.

The shrimp were huge and served on two large skewers over real mashed potatoes. Available sauces include garlic, barbecue, Thai, Cajun or honey buffalo. We had the honey buffalo, a favorite of Andrea's. It paired perfectly with our Yep Yep.

We were too full for dessert, so we plan to begin our next visit with the Chocolate Stout Cake or the "Beer"amisu next time.

The restaurant alone at GBC is worth a visit, and pairing menu items with a great beer is even better.

Located in downtown Geneseo, GBC features live music on Friday and Saturday evenings. It is open from 4 to 10 p.m. Mondays through Thursdays, noon to midnight Fridays and Saturdays, and noon to 9 p.m. Sundays.

Stop in. Visit. Enjoy a meal and raise a pint to friends and fun. Prost!

He said: The huge pretzel hanging on a rack and served with beer sauce was better than any I had in Germany. My biggest surprise was the scallops. While I usually pair a burger with my a beer, the scallops rivaled any that I have had in the Quad-Cities.

She said: The medium-rare tuna, served over wild rice, was delicious. It was an excellent complement to my Ogres Have Layers milk stout.

The large Bavarian pretzel hangs from a large stand and is served with homemade beer cheese for dipping at Geneseo Brewing Company in Geneseo.

The Jack and Bleu Burger at Geneseo Brewing Company in Geneseo features Monterey jack and blue cheeses, sauteed portabella mushrooms and onions on a pretzel bun.

This is the Honey Buffalo Shrimp served at Geneseo Brewing Company in Geneseo.

The scallops are served with polenta at Geneseo Brewing Company in Geneseo.

Medium-rare tuna is served with mashed potatoes at Geneseo Brewing Company in Geneseo.