When the Duke and Duchess of Cambridge's five-day tour of Pakistan was announced, the palace said, in a press release, that their focus would be "showcasing Pakistan as it is today — a dynamic, aspirational and forward-looking nation." Catherine, whose much-examined wardrobe serves as its own showcase, has used her public appearances to highlight Pakistani brands and designers — which many of those designers are celebrating.

It's a well-documented habit of Catherine's. During the Duke and Duchess' 2014 tour of New Zealand and Australia, she wore a dress by New Zealand-born designer Emilia Wickstead for a trip to Dunedin. And in 2016, she arrived in Mumbai during the couple's tour of India and Bhutan in a dress by Indian designer Anita Dongre.

She accompanied the outfit with earrings and a clutch from the Pakistani line Zeen, a brand she's fond of: Catherine wore a pair of ceramic earrings from the brand earlier this month, to a London meeting with the Aga Khan.

"We were overjoyed to see that the Duchess's first look upon landing in Pakistan was accented by our cream gleam clutch and beaded chandelier earrings," read a post on Zeen's Instagram account, adding that they were "ecstatic and humbled" by Catherine's choice.

While visiting the Islamabad Model College for Girls, she wore an embroidered blue kameez with matching trousers and chiffon scarf by Pakistani designer Maheen Khan; Khan subsequently described the look as "classic elegance for a Princess" in an Instagram post.

The Duchess wore white trousers by Khan later the same day to meet the Prime Minister, as well as a bright green Catherine Walker tunic and a matching chiffon dupatta by Pakastani brand Bonanza Satrangi. On the brand's Instagram, a spokesperson for Bonanza Satrangi said they were "truly humbled and elated" by Catherine's decision to wear the dupatta, which appears to have sold out on their website. The Duchess rewore her Zeen ceramic earrings to the meeting, their second appearance so far this month.

To an evening event at the Pakistan Monument in Islamabad Tuesday, hosted by the British High Commissioner, Prince William followed Catherine's lead in spotlighting the country's designers, wearing a sherwani by Pakistani brand Naushemian.

In an Instagram story, the brand's designer, Nauman Arfeen, elaborated on the design. "Materials used are turquoise self embossed jamawar fabric specially hand woven from our factories. Intricate embroidery in turquoise is done on the sleeves as well as back motif and sleeves," he wrote. "Finished to perfection with the right measurements to fit royalty."

Catherine wore a glittering green Jenny Packham gown to the event, but nodded to Pakistani design with her jewelry: She chose drop earrings from London store O'Nitaa, which sources designs from India and Pakistan. The green color palette of her tour wardrobe is symbolic: She even incorporated both colors of Pakistan's green and white flag in the outfit she wore to meet Pakistan Prime Minister Imran Khan.

This, too, is a familiar move from Catherine. During visits to Canada in 2011 and 2016, the Duchess repeatedly wore red and white.

Her blue outfits, however, might be more personal: Catherine could be referencing the late Princess Diana, who was photographed in a pastel blue shalwar kameez during her own visit to Pakistan in 1996. Designer Catherine Walker, meanwhile, was one of Diana's favorites; by wearing her designs on the royal tour, Catherine could be paying subtle tribute.

Laaleen Sukhera, a Pakistani writer and fashion critic based in Lahore, said in a phone interview that Catherine dressed like "a contemporary, urbane Pakistani woman, classic rather than trendy." 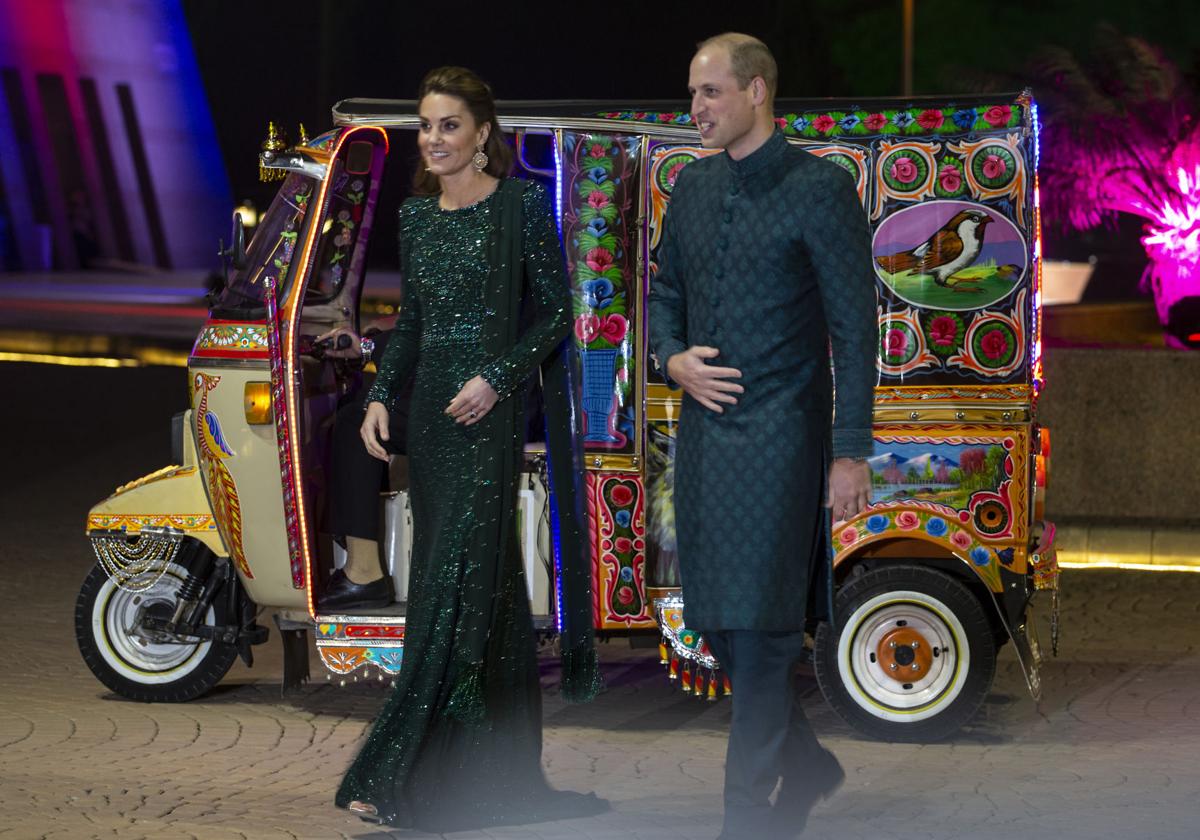 Britain's Prince William and his wife Kate arrive in a traditionally painted motorized rickshaw to attend a reception in Islamabad, Pakistan, Tuesday, Oct. 15, 2019. They kicked off a five-day tour of Pakistan on Tuesday amid much fanfare and tight security. (AP Photo/B.K. Bangash) 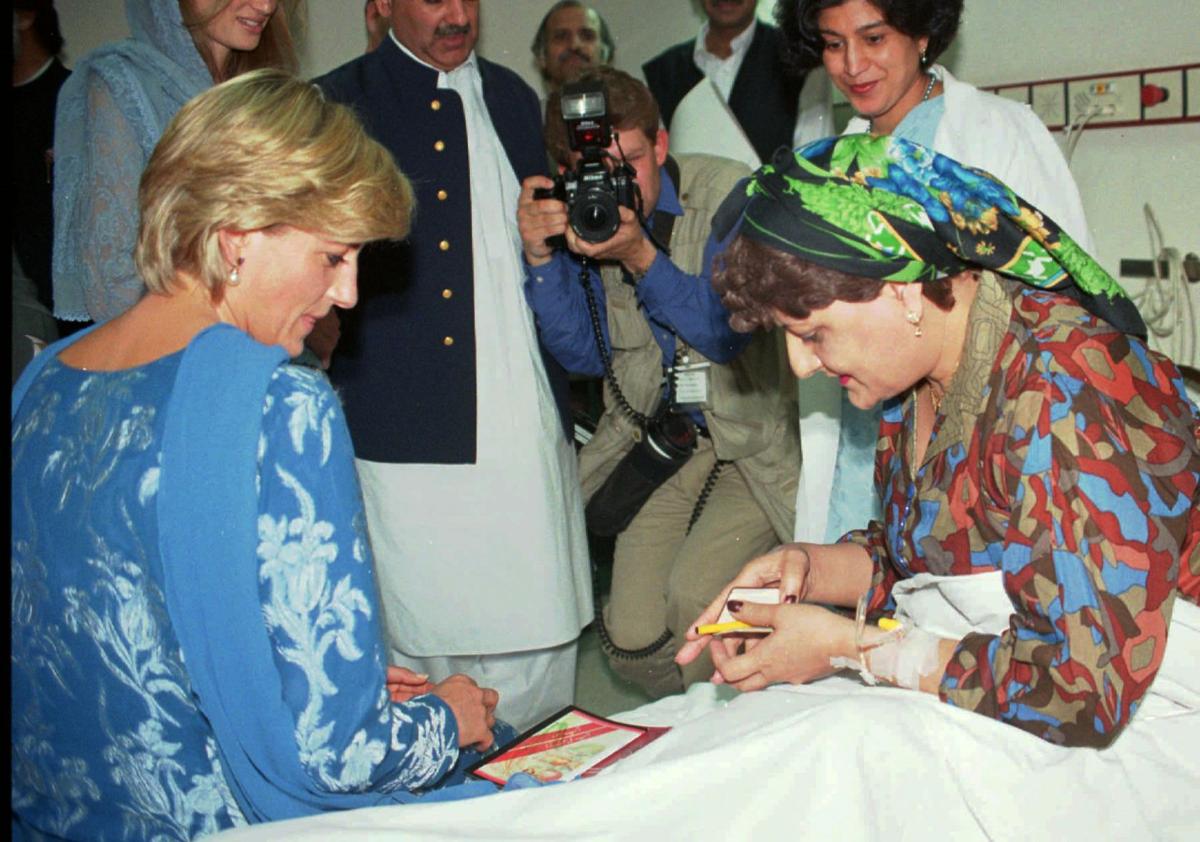 Princess of Wales, Diana, left, has a light moment with a cancer patient in Shaukat Khanum Memorial Cancer Hospital during her visit to raise money for the charity hospital for the poor in Lahore, Friday, May 23, 1997. The hospital was founded by Pakistani former cricket star Imran Khan and named after his mother who died of cancer. (AP Photo/K.M. Chaudhry)