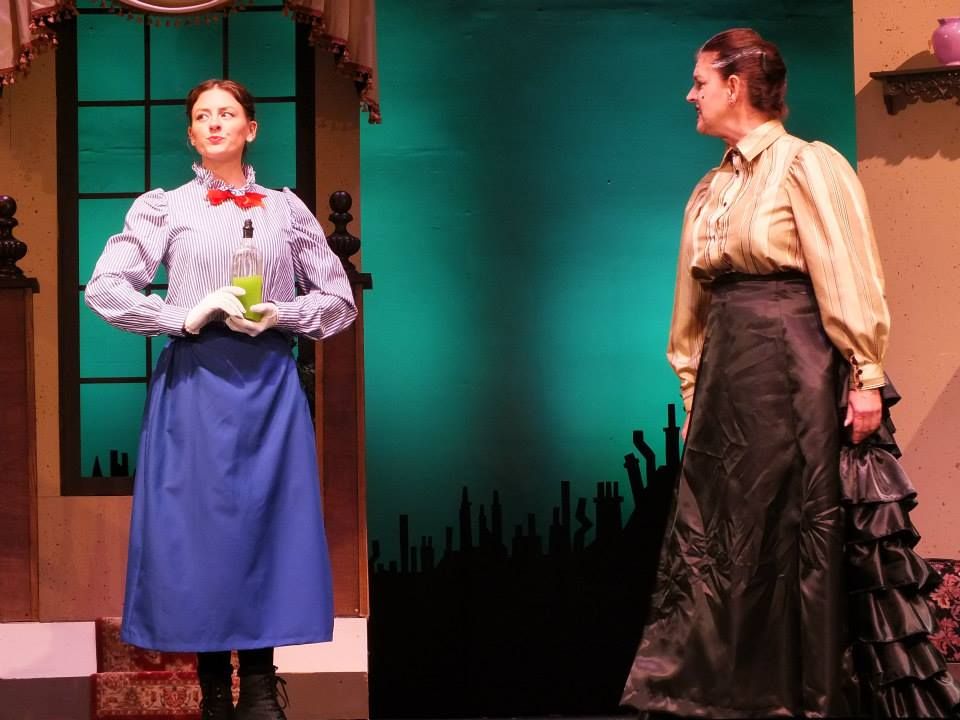 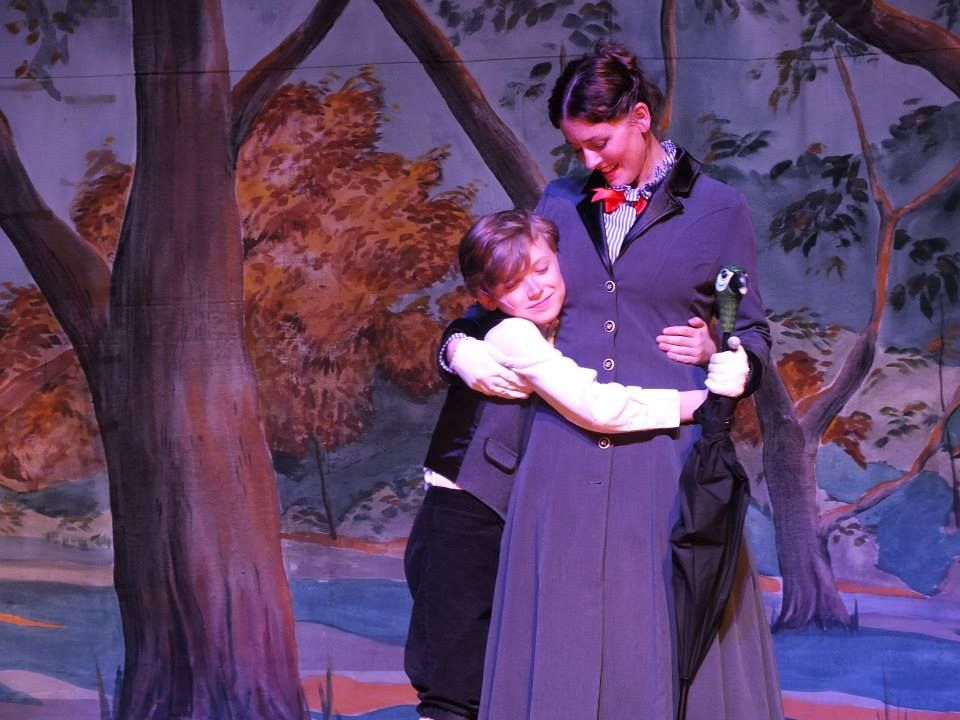 Its family-friendly popularity (due in part to memories of the iconic 1964 Disney film starring Julie Andrews) led to the addition of a matinee this Saturday. As the prim, firm, but loving English nanny, Heather Herkelman is absolutely stunning.

She is regal confident, and perfectly upright, unwaveringly locked into position. Ms. Herkelman appears to have profoundly internalized Mary, and even when standing straight and still, she exudes the brightness, joy and possibility of the role, with a laser-like focus and dedication.

What makes the musical such a success is that every cast member displays that commitment and devotion, and each piece of the puzzle is thoughtfully put in place -- from the oft-changing set, to dance, to costume, to orchestra. You can feel the hard work, pride and attention to detail that veteran director (and set designer) Harold Truitt and his team have put into this shining jewel.

Two alternating backdrops show an elegant London street scene, circa 1910, and a pastoral park. At the beautiful set for the Banks' home -- complete with staircase and fireplace, the father, George, (an excellent, intimidating Rob Keech) wants precision and order, qualities that this show has in abundance.

He's cold-hearted, strict and demanding, and has gone through six nannies in the past four months. They're looking for a new one, to add to an existing staff of two servants, to care for Jane (Molly Ahern) and Michael (Brennan Hampton). The kids want a nanny to be kind, sweet and pretty -- exactly the opposite of the one Mr. Banks had when he was a child.

He doesn't even have time to fly a kite with the kids. His nanny (Miss Andrew) appears to have beaten love for life out of him. Mr. Banks prefers a nanny to be disciplined and stern; Mary is tightly controlled, but an eternal optimist who lives life to the fullest.

Large aqua blue set pieces form the kids' bedroom, and when reversed, they display the upper part of the house, with a gorgeous roof.

A park scene showcases three gray "statues," who later spring to life, led by the playful Neleus (Tom Vaccaro). The chimney sweep, Bert, (a wonderful John Whitson) notes that "when you go with Mary Poppins, you go to places you've never dreamed of." Ms. Herkelman is a calming, reassuring presence -- a floating fairy godmother, and clutching her handbag and umbrella, she can seemingly do anything.

"Jolly Holiday" is a big, bright, exuberant ensemble number in the park.

Sheri Olsen is poignant and heartfelt as Mrs. Banks, who wrestles with an identity crisis -- wondering what her place is in the world. Is she being replaced by Mary?

Appropriately, Mr. Banks works at a bank, and that set includes two tall gray columns, amid more precision and order. He's pressured to make prudent investments, and a slip-up nearly costs his job. When the adorable kids run in, George gets upset, reinforcing that his nanny always kept him out of his father's way.

In contrast, Mrs. Corry's shop, out in the park, is an explosive riot of color, in costume and character. It's as if a Technicolor dream like "The Wizard of Oz," and an ideal setting for the delightfully rambunctious "Supercalifragilisticexpialidocious." The energetic number -- including a very enthusiastic Hillary Kaefring as Mrs. C. -- features the cast acting out each letter, very quickly.

Adding the flashing lights around the borders of the Guild stage at the end brings it to another level of delirious fun.

The well-known "Chim Chim Cher-ee" is an oft-repeated theme -- a touching, melancholy waltz. In the kids' room, the dolls and toys also come to magical life, in the lively waltz, "Playing the Game."

After Mary flies at the end of the first act, the family must find another nanny, and the dreaded Miss Andrew (Valeree Pieper) returns, accompanied by green back-lighting that brings to mind the Wicked Witch in Oz.

She is ruthlessly mean and condescending, and Ms. Pieper nails a frighteningly high note at the end.

The kids run away, and with their "surrogate father," Bert, they get to fly a kite. The battle between the good and evil nannies is exciting to watch. It's "Brimstone and Treacle" versus "A Spoonful of Sugar," and there's no doubt who triumphs.

They both show off very powerful voices, with Ms. Herkelman's higher and more radiant, and she exults in her own huge, jaw-dropping high note in victory.

Another visual highlight is the chimney sweeps against the city backdrop, a few silhouetted, and industrial smoke rising, for "Step in Time." The very impressive tap number is long, complex, intricate and exhilarating. Choreography is by Susie Adams and costume design by Cindy Monroe.

George sings of regret, rediscovering his humanity, and that leads to an abrupt change of personality -- echoing the conversion Scrooge goes through in "Christmas Carol," from bitter to sweet.

The starry finale is inspiring and motivating. One of the key morals of the show is "Anything Can Happen," if you let it. Life is out there, go and get it. In the capable hands of "Mary Poppins," it's a magical, soaring experience.