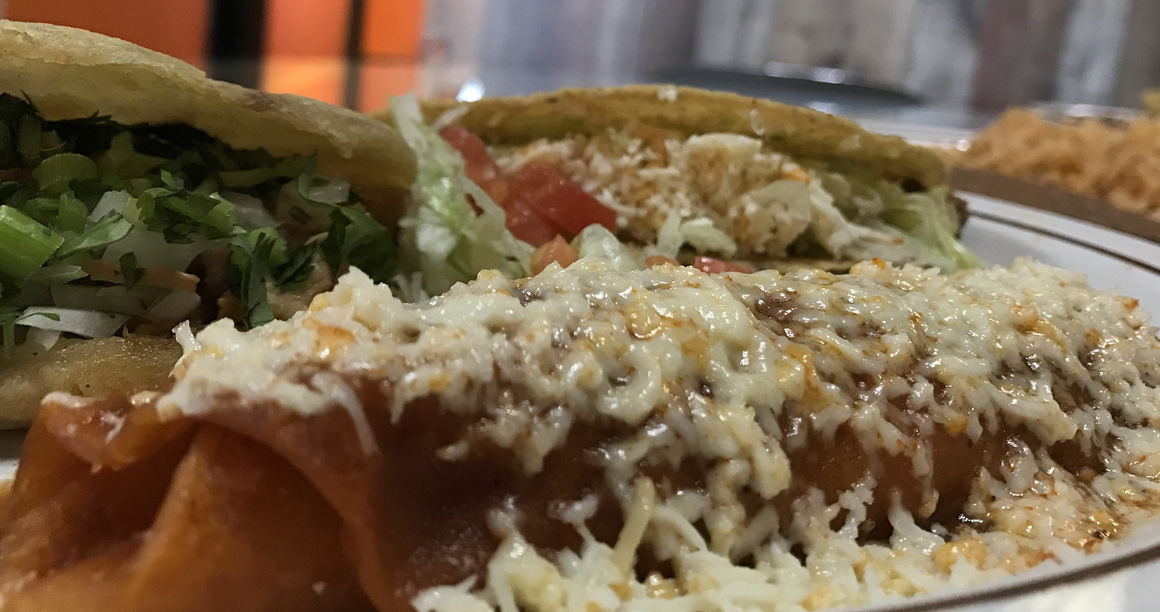 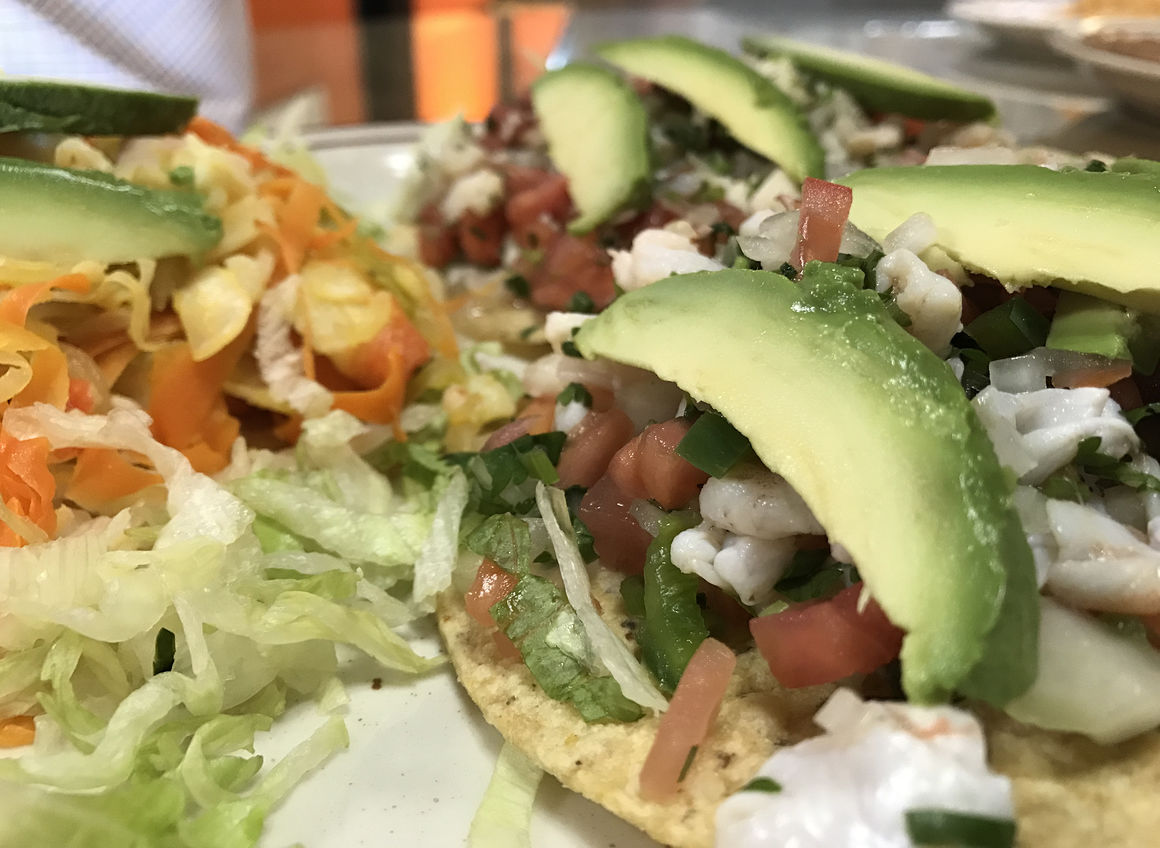 Ceviche consists of raw fish or seafood soaked in either lime or lemon juices that turn the flesh firm and opaque. At Old Mexico in Rock Island, ceviche is seasoned with herbs and served as a tostado on a crisp corn tortilla. 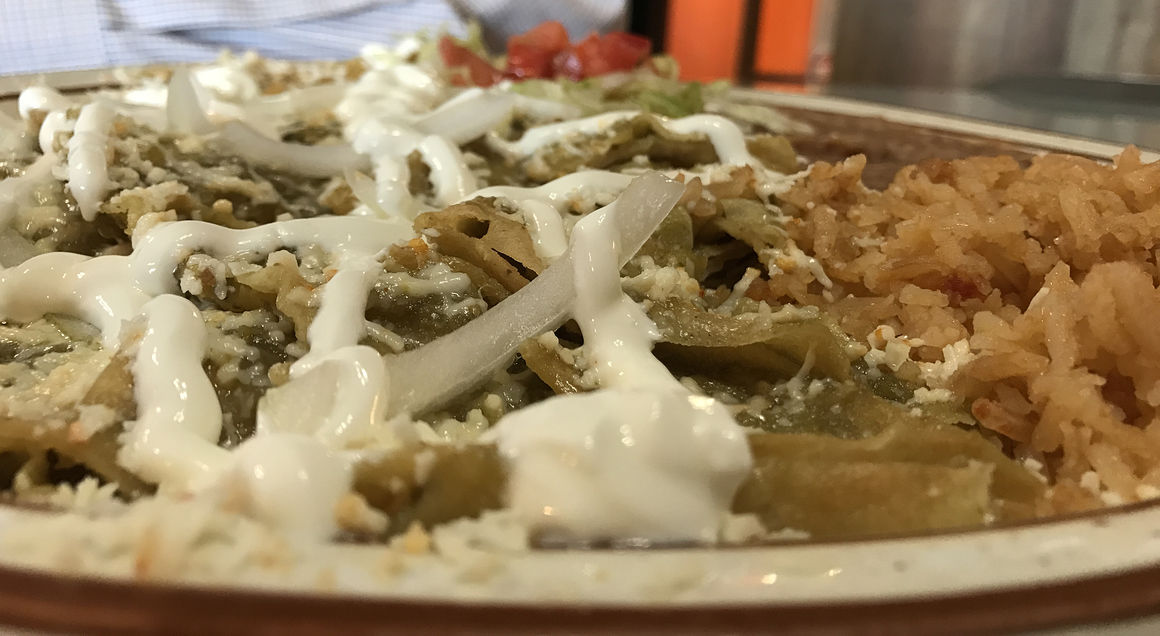 The chilaquiles served at Old Mexico in Rock Island is a Mexican tortilla casserole made with a green tomatillo sauce and carne asada topped with cheese, onion and sour cream. 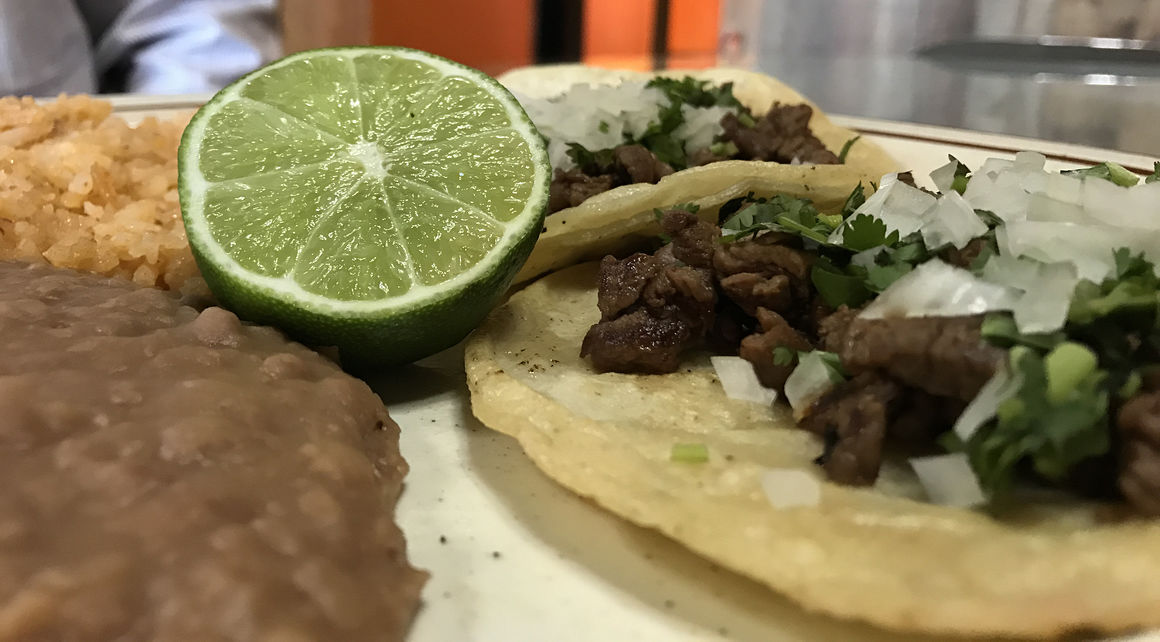 The Mexican-style carne asada tacos at Old Mexico in Rock Island feature tender meat in a flour tortilla, served with a lime to squeeze over the top. 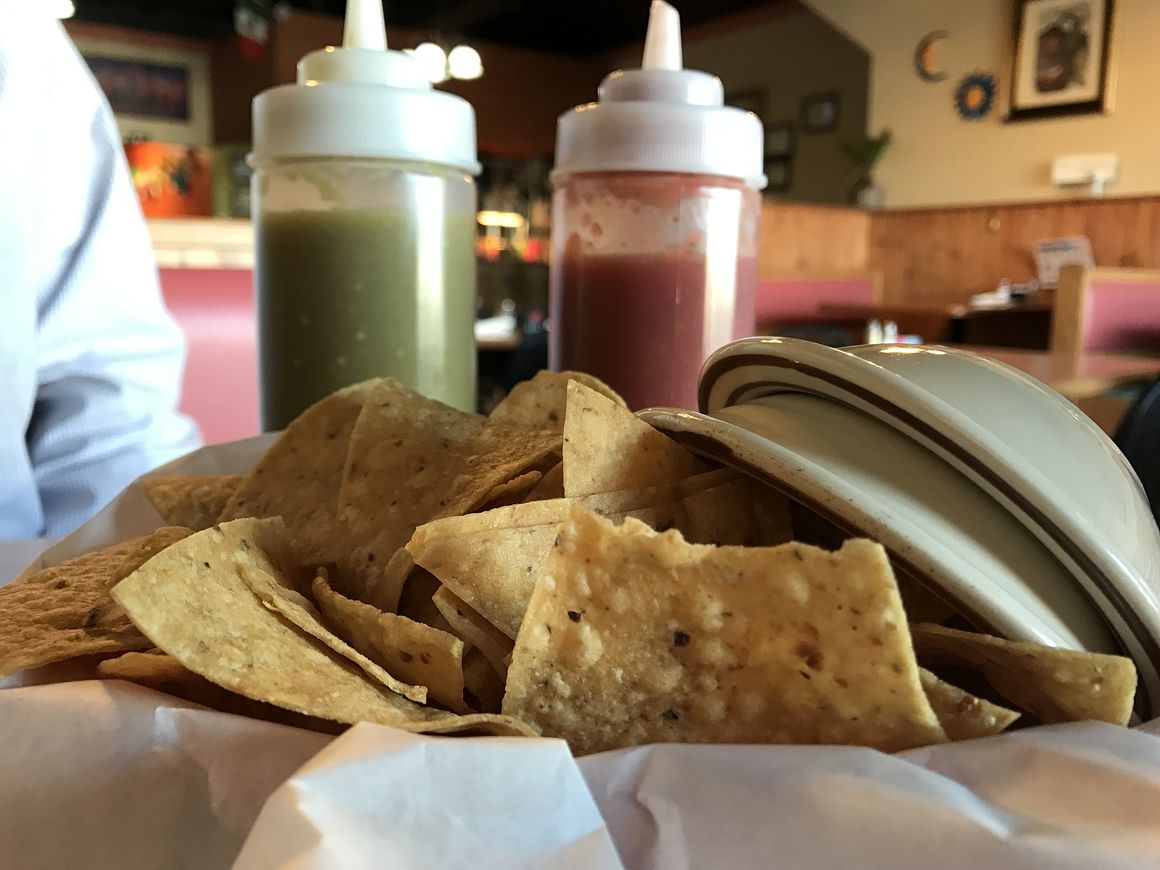 Red and green salsas are served with chips at Old Mexico in Rock Island.

Kevin and Karen Urick are touring the Quad-Cities one meal at a time for the column Dinner for Two. The Geneseo couple love everything about food. They grow food, travel the world for food, enjoy eating all styles of food and look forward to sharing their passion with readers! The column will appear periodically in the Your Food section. If you know of a place you want them to review, email them at quadcitiesrestaurants@gmail.com.

Old Mexico, 610 45th St., Rock Island. 309-788-7251, facebook.com/OLDMEXICORESTAURANTE/
Many authentic Mexican restaurants in the United States begin with a dream, and Old Mexico is one of those. First, it was the dream of longtime owners Lolita and Juan Barajas, and then that dream was passed on to a young couple from Mexico City.

Judith and Pedro Lua, the owners of Old Mexico, credit destiny for making their dream of owning a Mexican restaurant in the United States come true. They lived in Mexico City, and for the first five years of their marriage, both worked busy corporate jobs. Judith, who has a degree in marketing, worked for Gillette Corporation, and Pedro, who has a degree in physical education, worked as a trainer for the Mexican Tennis Federation.

While dining out to celebrate their fifth wedding anniversary, Judith asked Pedro: "If we were to start our own business, what kind of business would you like to have?" The answer came quickly: “A nice restaurant like this.”

They both gave up their jobs and opened an international restaurant named D’Lua in Mexico City that combined their favorite cuisines.

Hard work for the next five years built a very successful business. In 2015, Judith gave birth to a son, and they threw a large fiesta to celebrate his christening. Judith’s cousin invited her aunt, who was visiting family in Mexico City, to attend the fiesta. As fate would have it, the aunt was Lolita Barajas, who had owned Old Mexico since 1965 with her husband, Juan.

During a conversation about their similar businesses, Judith and Pedro expressed their desire to own a restaurant in America. Lolita mentioned she and Juan were hoping to sell their business and retire, and soon, a dream was destined to come true, with God getting the credit for their chance encounter.

After hiring a manager to oversee their restaurant in Mexico City, Judith and Pedro moved to Rock Island in November 2016 and bought Old Mexico in March 2017. They applied for and received an E2 Visa that allows them to live and own a business in the United States.

This hard-working couple have made improvements to the beautiful old home that houses Old Mexico. They kept many of the restaurant's old favorites on the menu, in addition to adding their own selections.

Once we were seated at Old Mexico, longtime waitress Lorena promptly served us a basket of fresh chips, along with both red and green salsas. The salsas were well spiced without being too hot.

A nice touch was the addition of a complimentary cup of traditional fideo soup. The soup, which also is available in an entree size, derives its name from the short strands of vermicelli used in the tomato/chicken broth mixture.

Old Mexico's menu is divided into appetizers, Mexican traditionals and entrees served with rice and beans, in addition to an American section for the less adventuresome.

In the $10 category, we ordered the chilaquiles. This was a first for us, but it will not be the last time we enjoy this Mexican tortilla casserole made with a green tomatillo sauce and carne asada topped with cheese, onion and sour cream. The flavor combination surprised us, and we really liked the way the flavors melded together.

There is a $7 enchilada category, but we went all out for the $12.95 steak rancheros. The very tender, charbroiled ribeye strip steak was covered with freshly grilled onions and green peppers and cooked to a perfect medium rare as ordered. It was served with a generous side of guacamole, and we opted for the rice and beans instead of the fried potatoes. A slice of steak dipped in guacamole and a scoop of beans is fine dining in our book.

There are so many things to chose from on this extensive menu that it is hard to decide what to have. Judith’s favorite is the Mexican-style carne asada tacos. The tender meat fills a flour tortilla, which is served with a lime to squeeze over the top to add zest.

When faced with so many choices, a combination plate always is a good option. You can choose from set combinations or make your own. Ours included a chicken gordita, an enchilada and a beef taco in a corn tortilla. All were excellent, but the potato and chorizo enchilada really stood out. The tortilla is “stained” in a guajillo chile sauce before the filling is added, giving a rich flavor to the dish.

Nearly full, we glanced over the new seafood menu that Judith added to incorporate her childhood memories of visits to Veracruz, Mexico. We soon decided to take home leftovers. Located on the Gulf, Mexico’s oldest port city is famed for its seafood, particularly the Mexican-style ceviche (suh-vee-chey). We have been fans of ceviche since we first had it in Lima, Peru, years ago.

Technically speaking, cooking requires heat, so ceviche isn’t “cooked,” but it isn’t raw, either. Fish and seafood are soaked in either lime or lemon juices that turn the flesh firm and opaque through denaturation, as if the seafood had been cooked with heat. The amount of time required to cook the fish depends on the type used.

The ceviche at Old Mexico is seasoned with herbs and served as a tostado on a crisp corn tortilla. The fresh taste of the fish, crab and shrimp really shine. The restaurant also serves fish tacos and shrimp fajitas.

Old Mexico is waiting for a liquor license, which the owners hope to have within a month. Margarita machines have been installed, and a selection of Mexican beers will be offered. We are looking forward to returning to try the clericot, a Mexican sangria made with either red or white wine, fruit, sugar and seltzer water.

Located on the corner of 6th Avenue (Illinois 92) and 45th Street, near Augustana College, the newly painted stately old home has been a restaurant for a long time. A curb-side pickup service is available in the parking lot -- you drive up, ring the bell and your order is brought to you.

Old Mexico is open from 9 a.m. to 9 p.m. Mondays through Saturdays. A complete breakfast menu and daily specials are available.

The Luas invite you to eat here because there is pleasure in life, food is what gives you pleasure, and they want to help people feel happy.

He said: We came to Old Mexico at the recommendation of readers and friends, and I was glad we did. I had to hold my ground to get the chilaquiles leftovers. The quality and variety of the ceviche was outstanding. Drop by for your Mexican favorites or something new.

She said: You can taste the passion that goes into this food. The potato and chorizo enchilada with the tortilla “stained” in guagillo sauce was a favorite. The ceviche brings out the fresh-caught taste in fish and seafood.
View Comments

Ceviche consists of raw fish or seafood soaked in either lime or lemon juices that turn the flesh firm and opaque. At Old Mexico in Rock Island, ceviche is seasoned with herbs and served as a tostado on a crisp corn tortilla.

The chilaquiles served at Old Mexico in Rock Island is a Mexican tortilla casserole made with a green tomatillo sauce and carne asada topped with cheese, onion and sour cream.

The Mexican-style carne asada tacos at Old Mexico in Rock Island feature tender meat in a flour tortilla, served with a lime to squeeze over the top.

Red and green salsas are served with chips at Old Mexico in Rock Island.