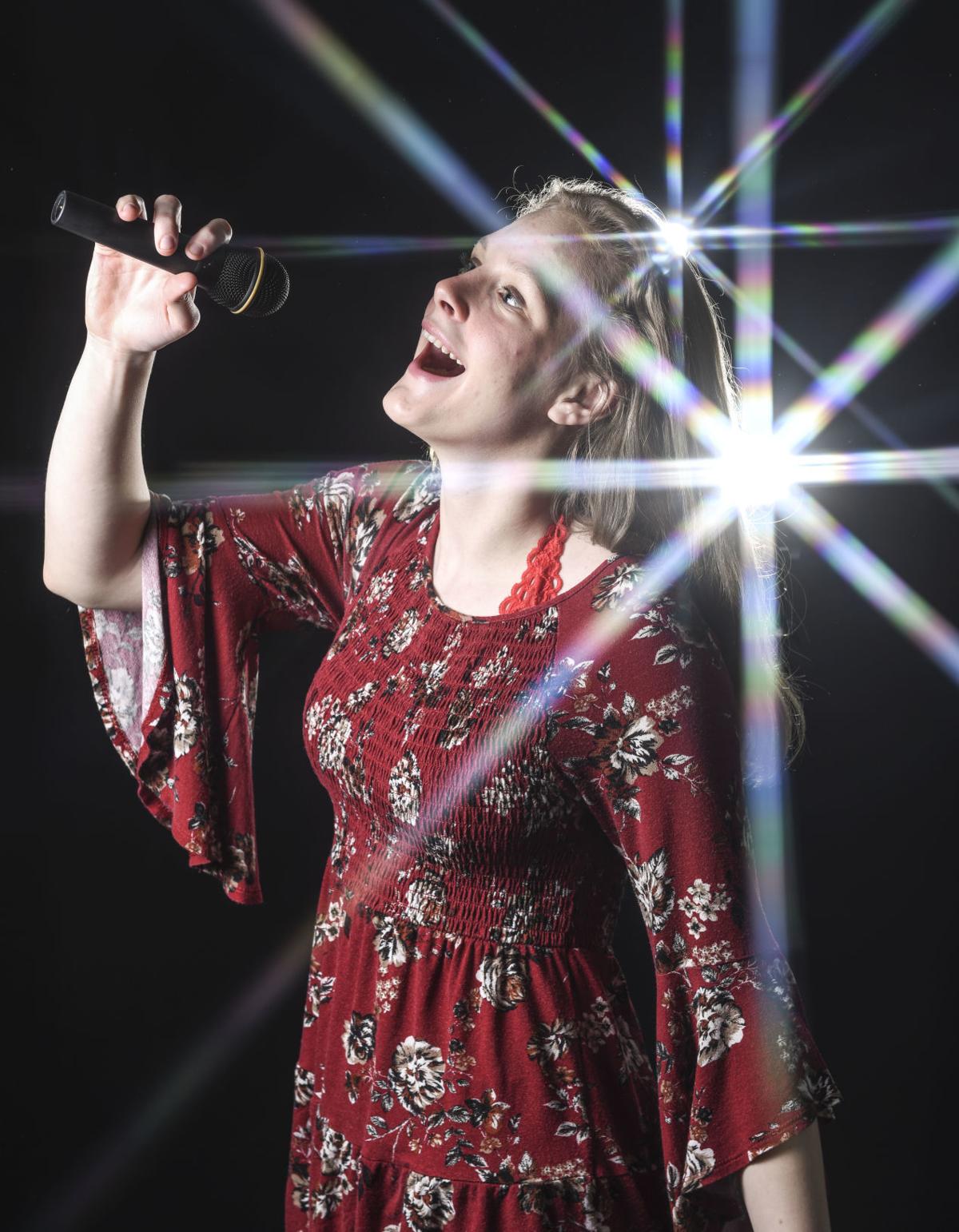 Alexa Mueller, 14, of East Moline, poses for a portrait on Friday, Feb. 7, at the Quad-City Times studio in Davenport. 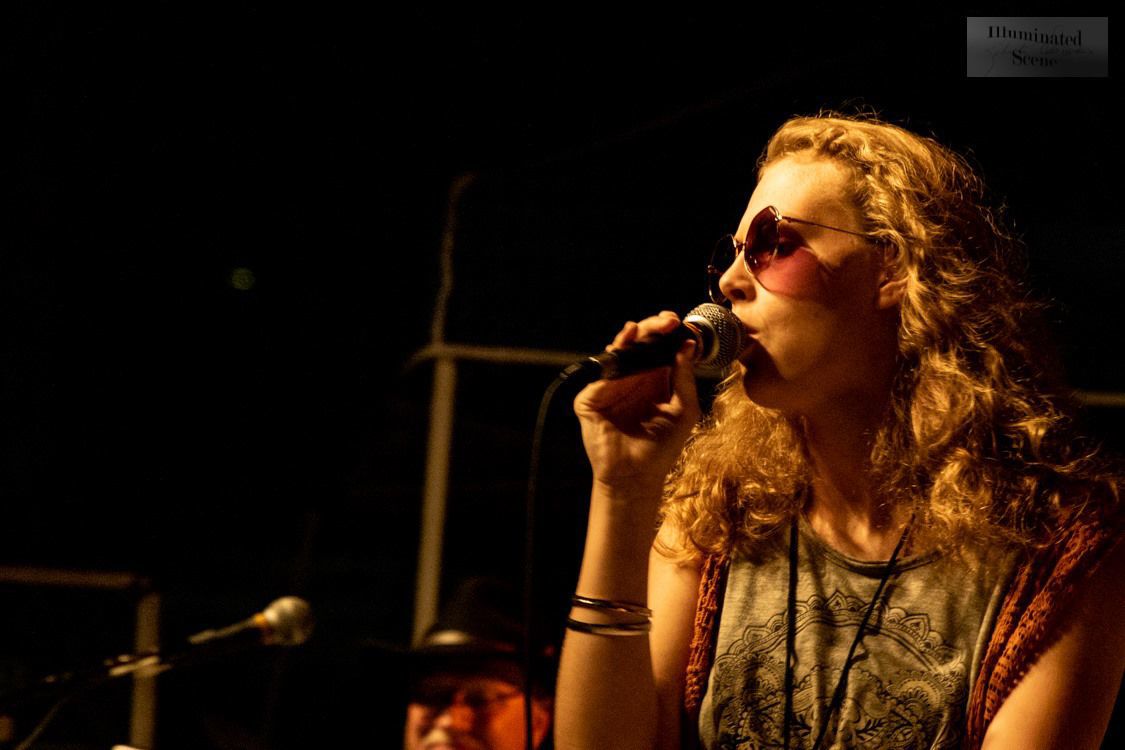 Alexa Mueller performs as Janis Joplin in August 2019 at Sweatstock. 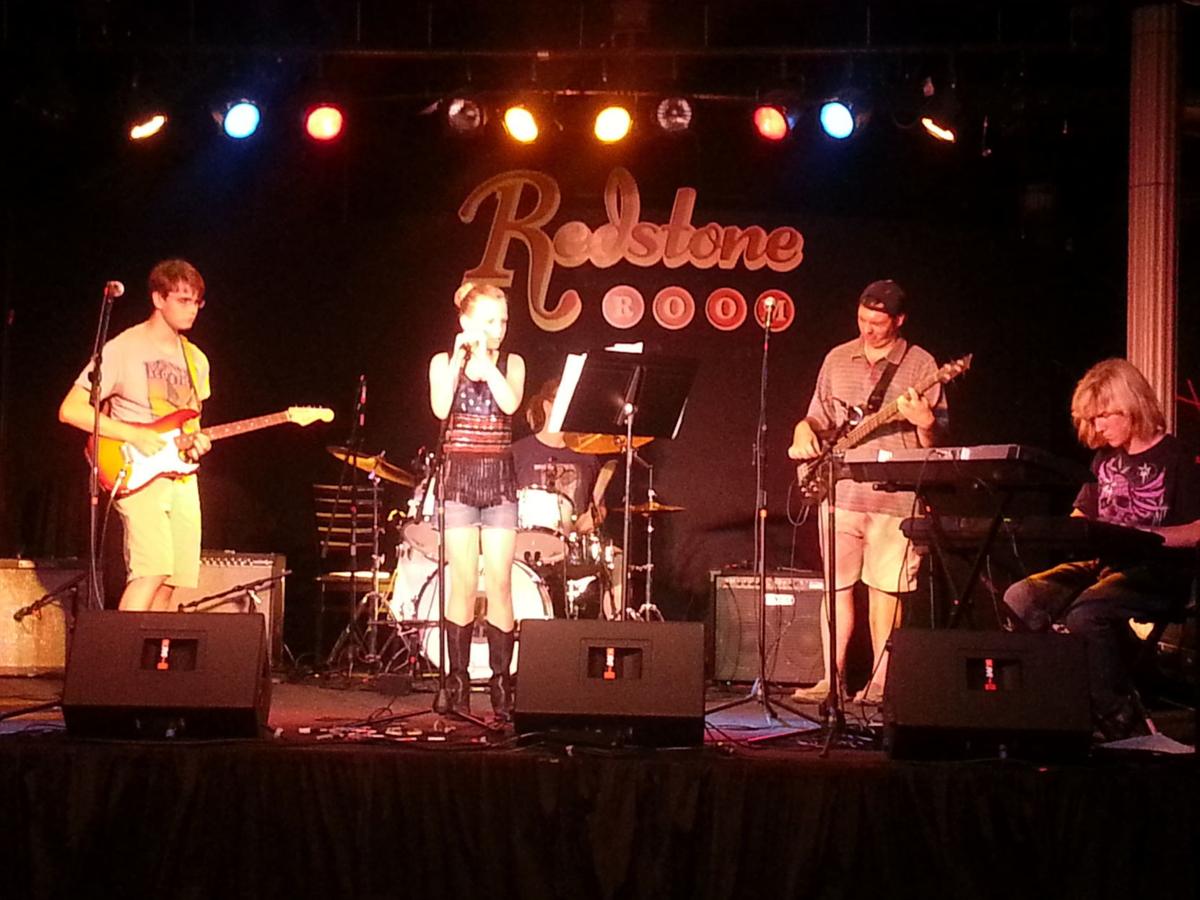 Alexa Mueller (second from left), at age 10 at one of her early RME Rock Camps, in the Redstone Room, Davenport. 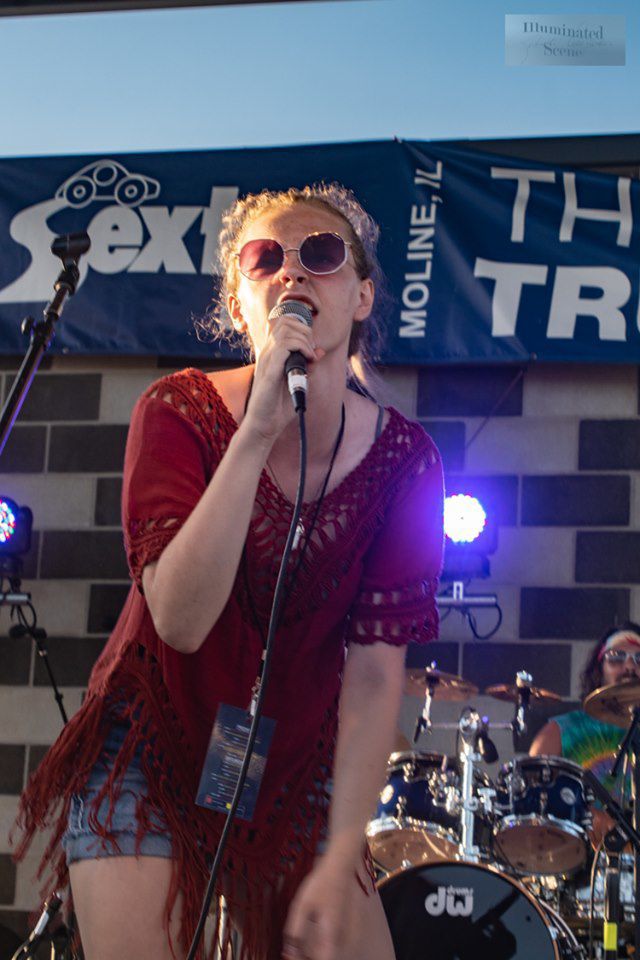 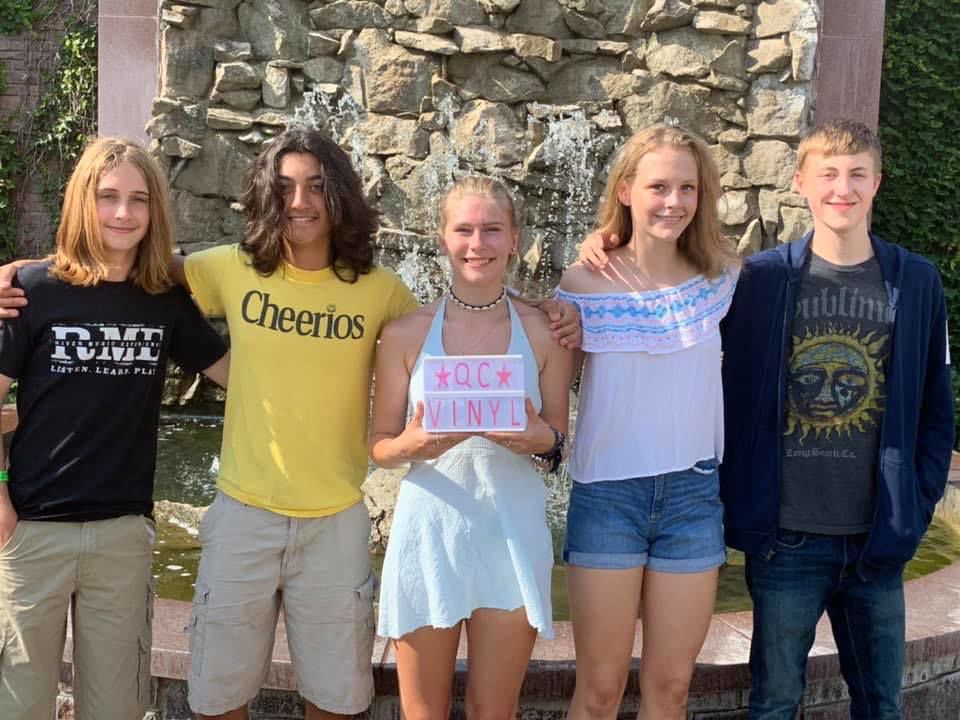 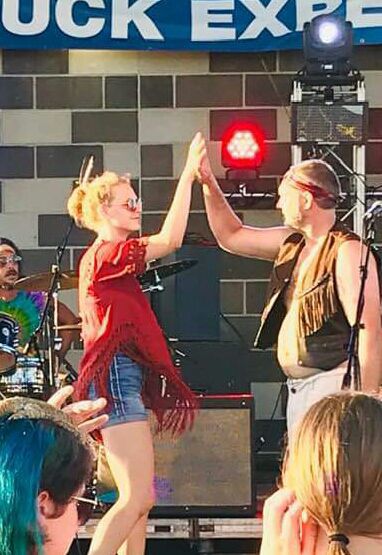 Alexa at Sweatstock after a CCR set with Alan Sweet, in East Moline's Murphy Park, August 2019. 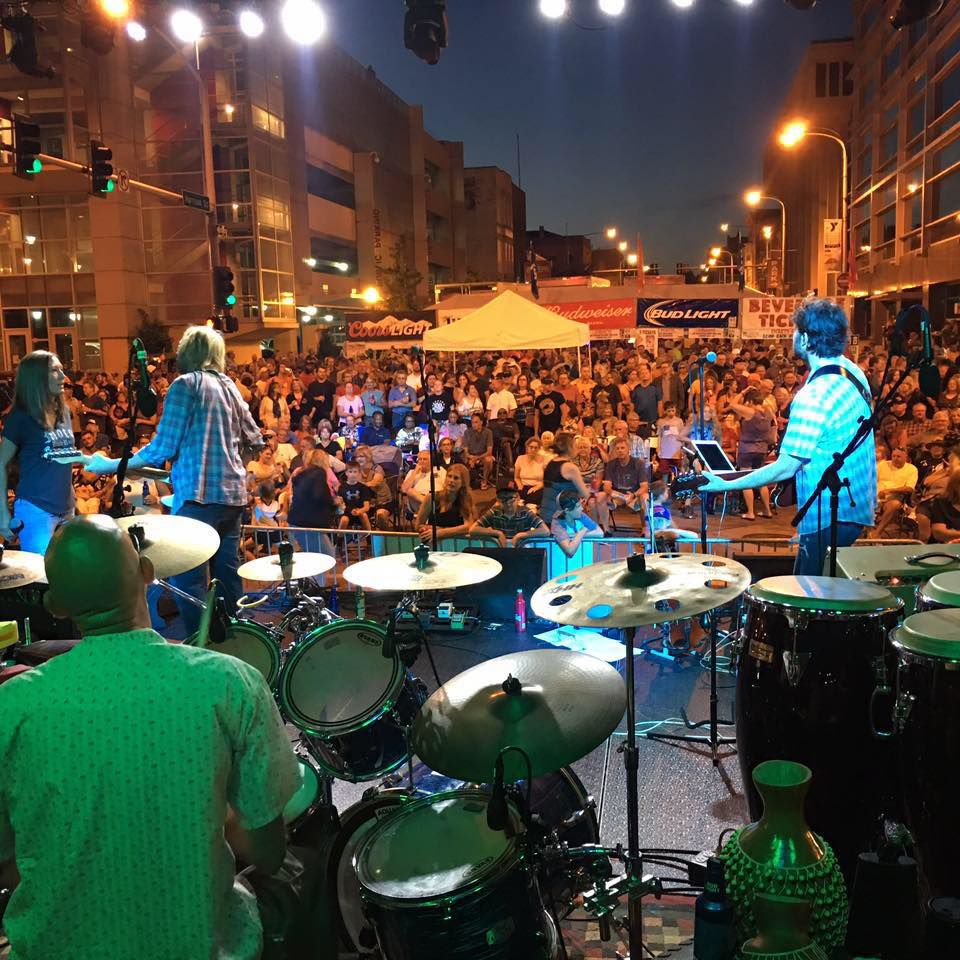 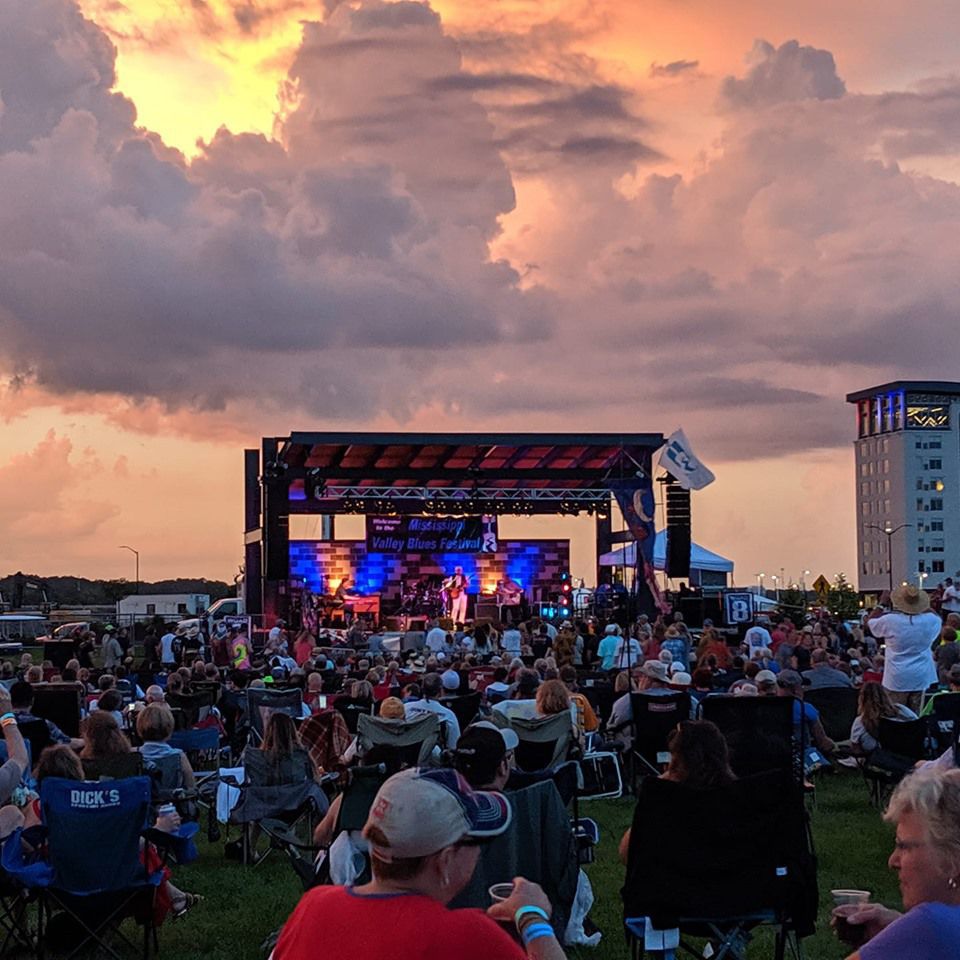 Murphy Park in East Moline is the setting for Sweatstock. 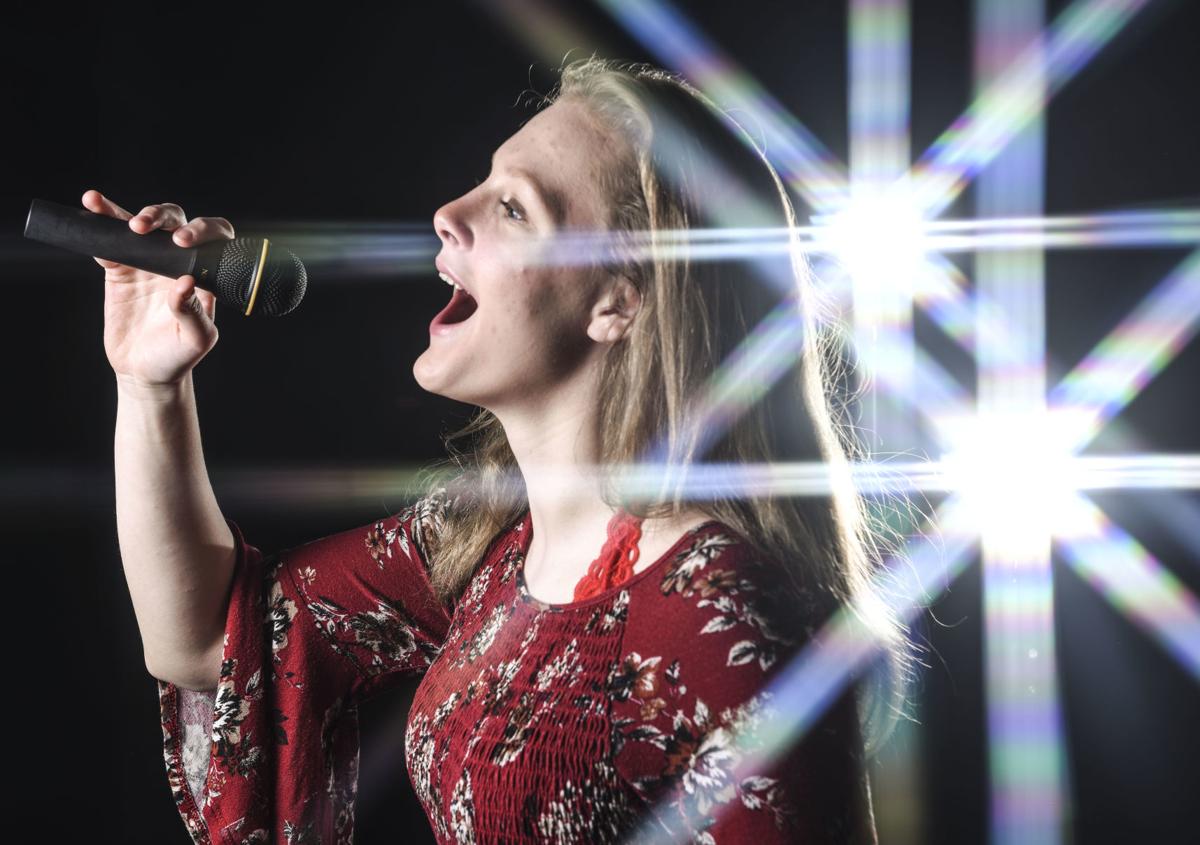 Alexa Mueller, 14, of East Moline, poses for a portrait at the Quad-City Times studio in Davenport, Friday, Feb. 7, 2020.

Because she sings the blues with power and poise, Alexa Mueller appears a lot older and wiser than 14. Being 5-foot-10 also helps.

The Pleasant Valley High School freshman, who lives in Hampton, is among 30 finalists who will compete in the first “Are you the Voice of the Quad Cities?” contest, which will start at 8 p.m. Saturday, Feb. 15, at the Rust Belt, 533 12th Ave., East Moline. They'll be competing for a $3,500 top prize.

“Alexa was chosen because she's the real deal. She was an easy choice,” said contest organizer and judge Billy Peiffer of the local band Lynn Allen. He said 87 people auditioned for the first round in December, and finalists were chosen by judges Jan. 4.

Winners Saturday will be picked by a combination of public ballot and four judges, Peiffer said.

“This will be tough. These contestants are talented,” he said.

“I feel very fortunate to be sharing the stage with such great local talent for this competition,” Alexa said recently, “and the Rust Belt is a huge, new venue here in the Q-C, which is really fun to perform in.”

In the preliminaries, she did an a cappella version of James Brown’s “It’s a Man’s World,” and she’ll do the whole thing for finals. The second round she did Sam Cooke’s “A Change Is Gonna Come” to a prerecorded track.

“I’m just a big fan of James Brown and Sam Cooke, so it was a pretty easy choice,” she said.

Her mentor in the contest, which is modeled after the TV series "The Voice," has been contest judge Brian Miner, also a member of Lynn Allen and a disc jockey for WXLP-FM (97X).

Alexa has sung since she was 9, and she takes guitar and piano lessons. She’s taken part in the River Music Experience Rock Camp and Kidstock at RME for six years. During that two-week summer program, a band is formed to present a concert at the RME's Redstone Room.

“It’s really fun, and you get to work with professionals,” Alexa said of the camp. She’s also participated in RME’s one-week Winter Blues Camp twice and has been named to the Winter Blues All-Stars, a group of four or five musicians that plays at venues in the area.

Alexa plays guitar and sings in the five-teen band QC Vinyl. It was started by All-Stars from 2018, and Alexa joined last May.

“Some of the new stuff is catchy maybe, but it’s mostly computer-generated,” Alexa said. “There’s no guitar in it, which I enjoy listening to. The vocals are all dubbed over, auto-tuned. It’s not that I don’t think they’re talented; it just sounds very electronic. There’s no soul in it.”

In summer 2018, Alexa was accepted to the prestigious Fernando Jones Blues Camp at Columbia College in Chicago, which attracted over 20 students from across the country and Europe. During the weeklong camp, she sang at multiple venues, including Navy Pier, Reggie’s Rock Club and the University of Chicago.

“The adrenaline is really nice. It’s really invigorating, being surrounded by experienced musicians,” she said of performing. “Being able to grow, and just become a better musician because of that, it’s a really good thing.”

She said one of her peak experiences was an All Sweat Productions New Year’s Eve tribute to James Brown and Aretha Franklin, presented in 2018 at the Redstone Room.

“He pulls like the best of the best,” Alexa said of Alan Sweet, organizer of the tribute shows.

She also performed last August at the All Sweat “Sweatstock.” The two-day festival commemorating the 50th anniversary of Woodstock was presented at The Bend in East Moline.

When asked what she would do with the money if she won, Alexa said, “Some of the money I would save for college, which is coming up in just a few years. It is also important to me to support various charities and give back to the community.” Among her favorite organizations, she listed RME because “they do amazing work to help support kids and music education in schools all over the Q-C area.”

To see her sing in the second round at Rust Belt, click here.

Alexa's band (facebook.com/qcvinylband) will play a Rebuilding Together benefit show Saturday, Feb. 22, at Outer Edge Bar & Grill, 509 N. School St., Atkinson. The event will start at 6 p.m., and the band will play at 8. Tickets are $25, and they're available at eventbrite.com.

Another QC Vinyl singer, Samantha Gilliland, is a finalist for “The Voice."

For more about the contest, visit areyouthevoiceofthequadcities.com.

The 50th anniversary of Woodstock will be celebrated with a new music festival, Sweatstock, Aug. 16 and 17 in Murphy Park at The Bend on the M…

EAST MOLINE — This has been a big week for Murphy Park and the new Bend Event Center, as well as related developments in the area.

Alexa Mueller, 14, of East Moline, poses for a portrait on Friday, Feb. 7, at the Quad-City Times studio in Davenport.

Alexa Mueller performs as Janis Joplin in August 2019 at Sweatstock.

Alexa Mueller (second from left), at age 10 at one of her early RME Rock Camps, in the Redstone Room, Davenport.

Alexa at Sweatstock after a CCR set with Alan Sweet, in East Moline's Murphy Park, August 2019.

Murphy Park in East Moline is the setting for Sweatstock.

Alexa Mueller, 14, of East Moline, poses for a portrait at the Quad-City Times studio in Davenport, Friday, Feb. 7, 2020.