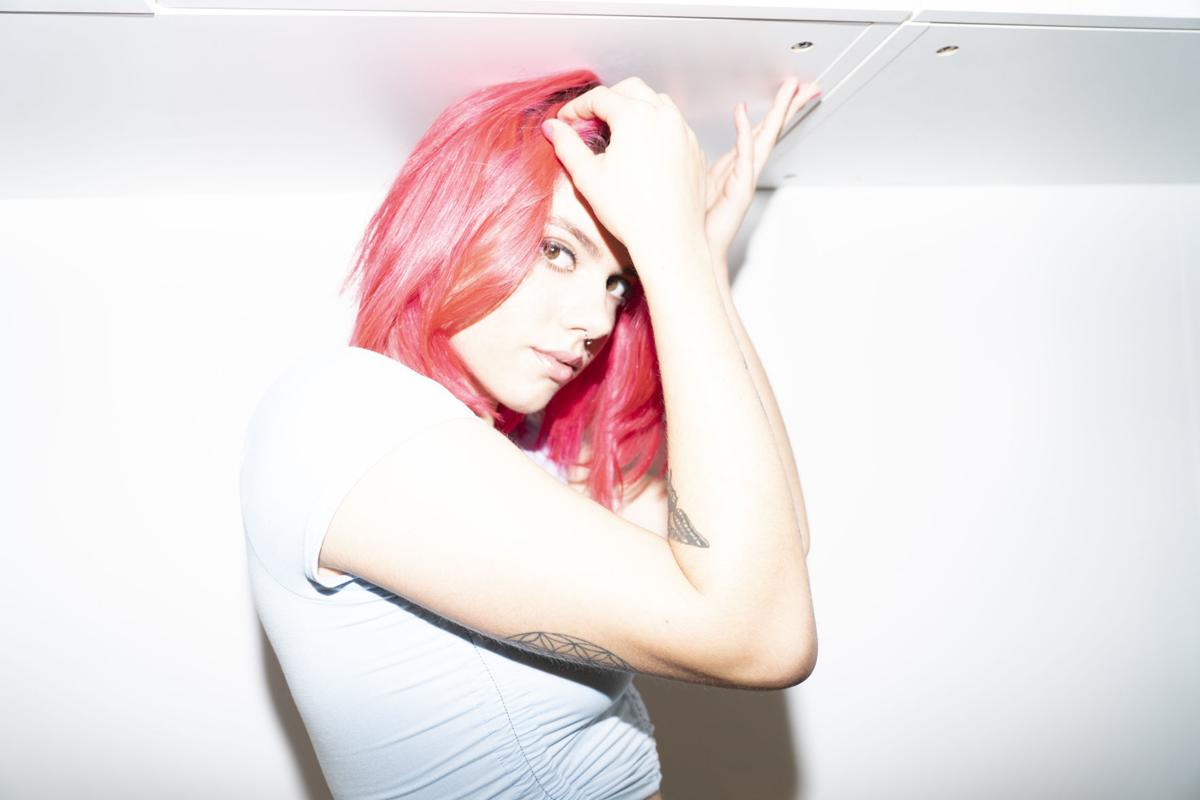 Caly Bevier will visit the Quad-Cities on Saturday, Oct. 26. 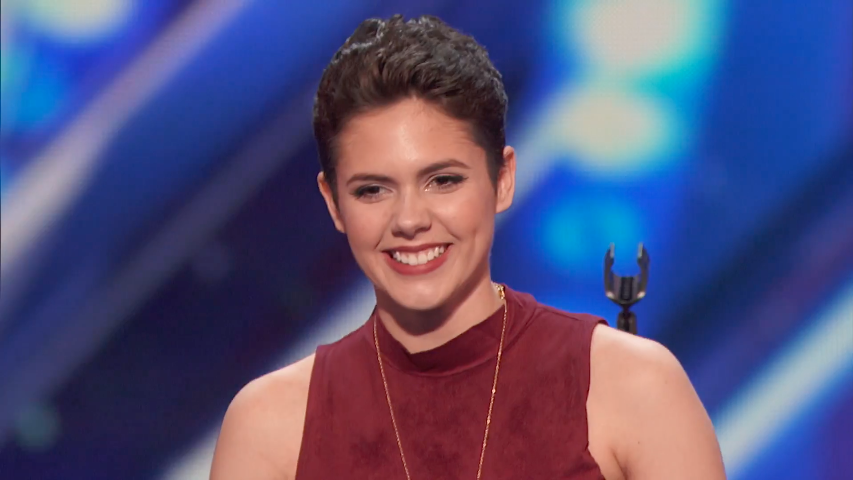 Caly Bevier, a 19-year-old ovarian cancer survivor and recording artist who was a semifinalist on “America’s Got Talent” in 2016, will perform Saturday at River Music Experience in Davenport.

DAVENPORT — Caly Bevier lost her hair after being treated for ovarian cancer at 15, but the singer-songwriter has her locks back (in a new shade), her groove back and her busy life is in the pink.

“I really use my hair as an expression of myself,” Bevier, 20, said in a recent telephone interview of dyeing her hair neon pink earlier this year. “I really learned how to be myself without any apologies, without anyone judging me.”

The northwest Ohio native (who's lived in Los Angeles since 2017) also uses her music to express herself and has impressed millions nationwide with her courage and resilience in the face of cancer, through appearances on TV's “Ellen” and “America's Got Talent.”

“It's something that I've been doing since my fight with cancer, sharing my story, hoping to inspire people to keep fighting,” Bevier said in the interview. “It's important to be an advocate.” She's worked with just a handful of ovarian-cancer organizations the past three years, among other cancer causes.

“Through my music, I always want to inspire people, make sure they can relate,” she said. “Whether they're in love, or loss of love, or a party, anything I write about, I want people to be able to relate, to be inspired.”

She was especially inspired by Rachel Platten's powerful 2014 anthem “Fight Song,” which helped Bevier overcome stage 3 ovarian cancer, with which she was diagnosed in 2015. She fought through the entire process, staying positive, determined to not miss out on what the future had planned for her.

“It helped me so much,” Bevier said of her music and singing. “It doesn't necessarily have to be a song that inspires me to keep fighting. I just loved listening to music; it was just a therapeutic thing. I listened to lot of Arctic Monkeys, a lot of indie pop. It made me happy. I always sang my whole life.”

After Bevier recorded a version of “Fight Song” while still sick, her father, Adam, posted a video of the recording on Facebook along with an accompanying photo slide show. Many others in her hospital had seen the video, which led to a special request.

The family of another young patient was hosting a fundraiser and asked Caly to not only attend but to perform “Fight Song” as she did in the popular Facebook video. Her dad filmed this performance and uploaded it to YouTube, not expecting what was about to come.

The next day, the video had been seen by hundreds of thousands of people, which caught the attention of Ellen DeGeneres, who asked Caly to fly to Los Angeles to be a guest on her show that December, in a set decked out for Christmas. Although battling the flu, which would leave her without much of a voice, Caly fought through it. Ellen surprised her even more when she brought Rachel Platten out to sing alongside Caly on a piano bench.

“It was a total surprise,” she recalled. “It still feels like I'm floating, like it was a dream. I can't imagine this artist wrote this song, what they were going through, and it helped me and so many other people.” The video of that episode has nearly 3.5 million views.

Taking note of this newfound fame was the hit TV series, “America’s Got Talent,” which asked Bevier to come audition.

“The second I walked out there, I had this weird feeling that this was where I belonged,” she said. “I felt comfortable. And any nerves I had before were suddenly gone.” The performance she gave would not only trigger her third viral video, but also left few dry eyes in the house and sent her to the quarterfinals.

Simon Cowell, known as the most famous and most critical talent judge in the world, decided to use his one and only “golden buzzer” to fast track her to the top. In addition to his “something special” quote, Cowell also said, “I see big things happening for you.”

“Just the fact I impressed him at all was like a childhood dream, watching 'Idol' and everything,” Bevier said of her reaching the semifinals. “Overall, because it was more like a variety talent show, that made things a lot more comfortable. It was not as competitive.”

In early 2017, Bevier signed with a major management company (Primary Wave), and moved to Los Angeles, where the creative community is. She’s spending her days in the studio with some of the industry’s top producers and writers, crafting her first batch of original material, including with Bonnie McKee (Katy Perry, Britney Spears), Mike Green (5 Seconds of Summer, Gwen Stefani) and Joe Garrett (Zayn).

Bevier has also performed at events such as the Angel Ball in NYC along with such names as Kevin Hart and Earth, Wind & Fire, and Philly Fights Cancer, which she co-headlined with John Legend. She also sang the national anthem at the NASCAR all-star race in May 2017, and at three NFL games.

This past spring, she released her music video for “Hate U Sometimes,” which co-stars her real-life boyfriend, Sam, who made the transition from female to male.

“A fighting spirit and effortless melodic instinct have created a groundswell of support for her music, and her story as a cancer survivor has resonated with fans from around the world,” a review at chillfiltr.com said. “This song and video do much to define her as worthy spokesperson for a generation of unstoppable LGBTQ warriors.”

Bevier said she came out to her parents as lesbian at 15, and they were very supportive and open-minded. She now considers herself pansexual, which means she's attracted to anyone, “not caring whether female, male, non-binary or trans.”

Making the video with Sam, she said was fun. “We kept laughing every time; it turns out he's like a great actor,” Bevier said. “He's typically kept back.” She said they met before he started his gender transitioning.

“He's been super strong throughout. It's hard with family matters, but he does have a great support group around him,” she said. “His confidence level has gone through the roof.”

Of Bevier's sound style, she said: “The vibe of the music is dance pop, but with an edge. Not your typical bubble gum pop. I want my songs to make you want to roll down your windows and drive fast.”

DAVENPORT — A free meet-and-greet session will be held at 3 p.m. Oct. 26 with BMI recording artist Caly Bevier, who will headline NormaLeah Ov…

Talk about bodies of work.

Caly Bevier will visit the Quad-Cities on Saturday, Oct. 26.

Caly Bevier, a 19-year-old ovarian cancer survivor and recording artist who was a semifinalist on “America’s Got Talent” in 2016, will perform Saturday at River Music Experience in Davenport.