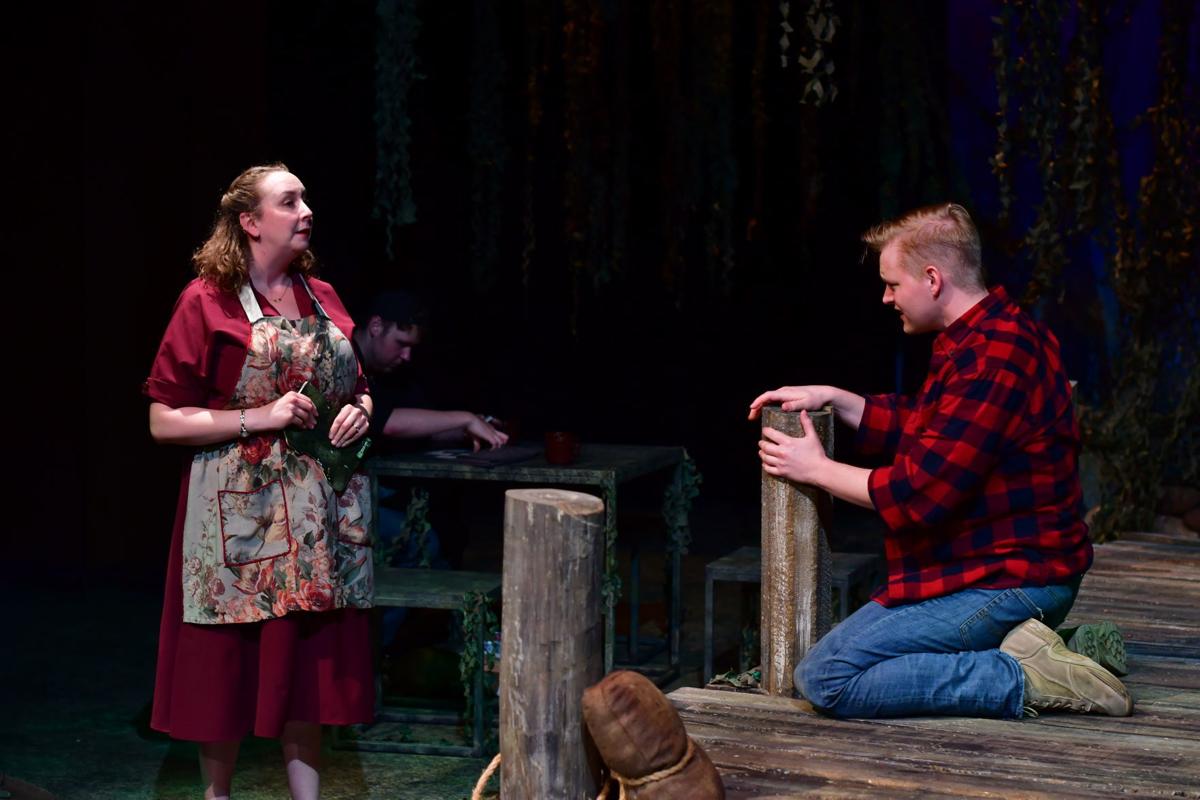 Megan Cox, left, and Keenan Odenkirk perform in a scene from "A Green River." 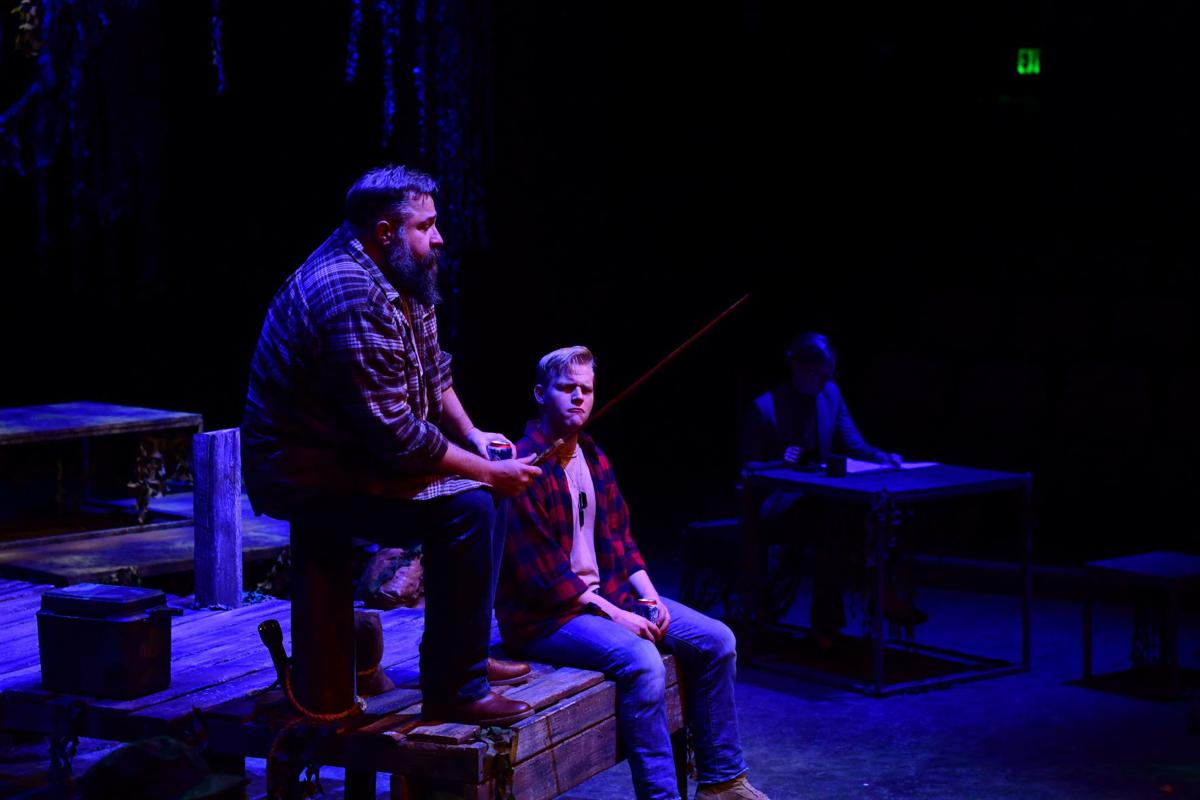 Jeremy Mahr, left, and Keenan Odenkirk in "A Green River." 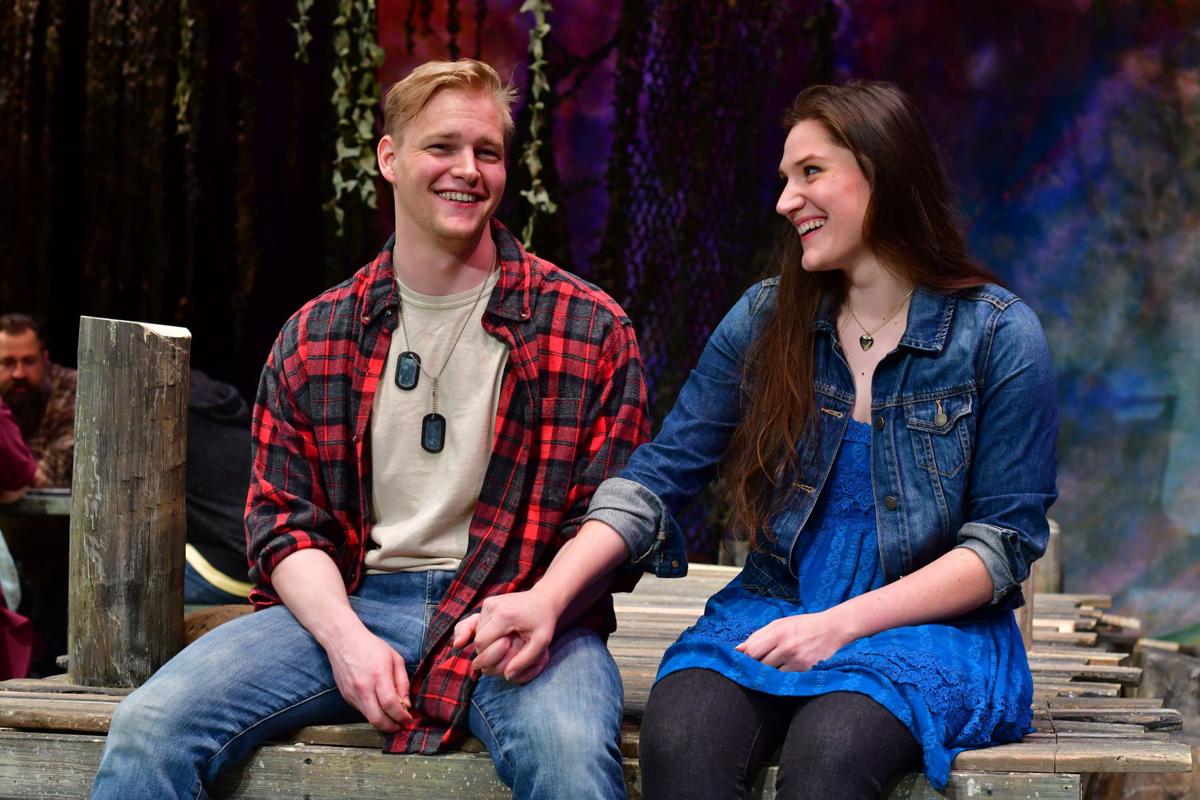 Keenan Odenkirk, left, and Marjorie Gast perform in the new Mississippi Bend Players' production of "A Green River," an intense drama about a soldier trying to cope with PTSD. 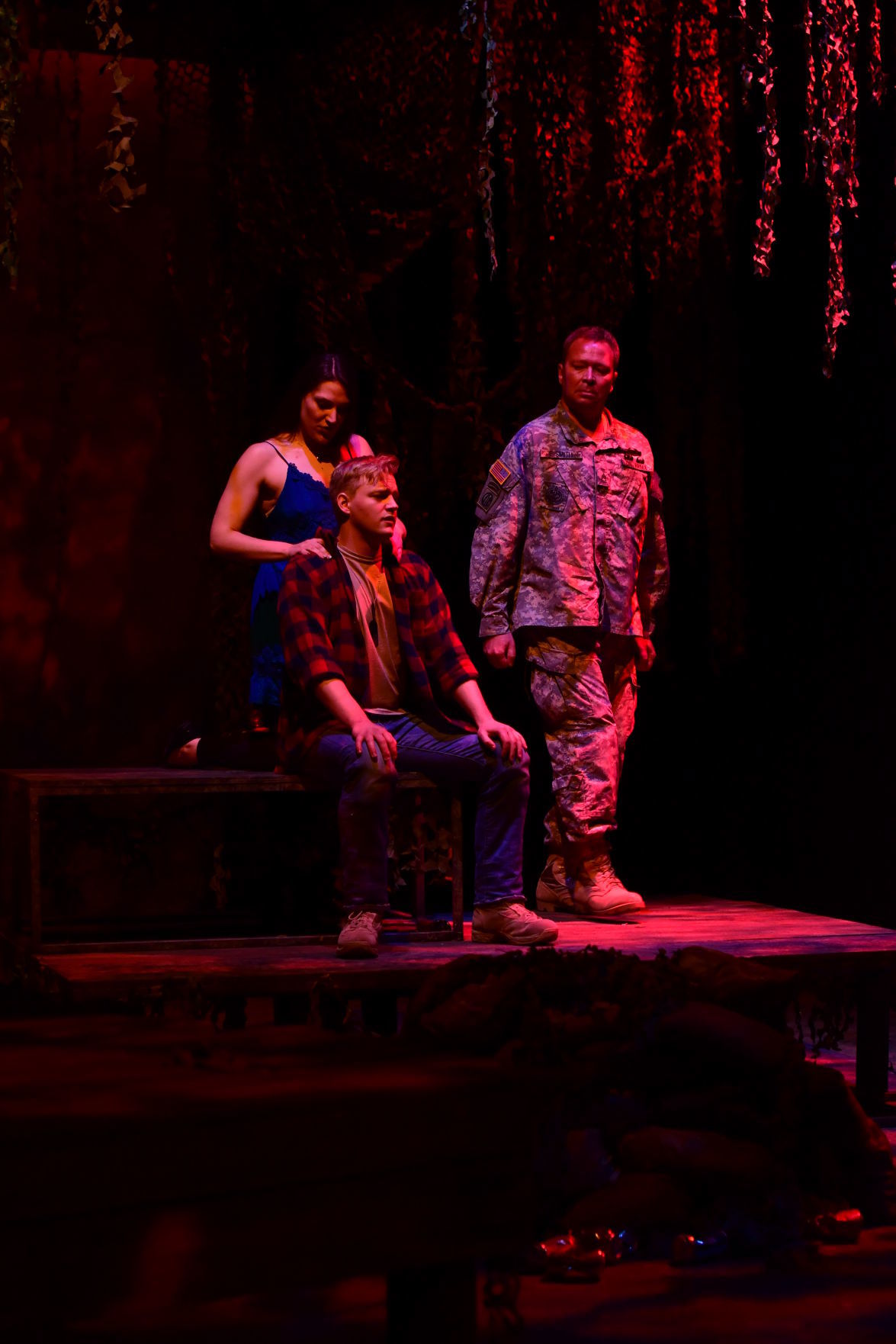 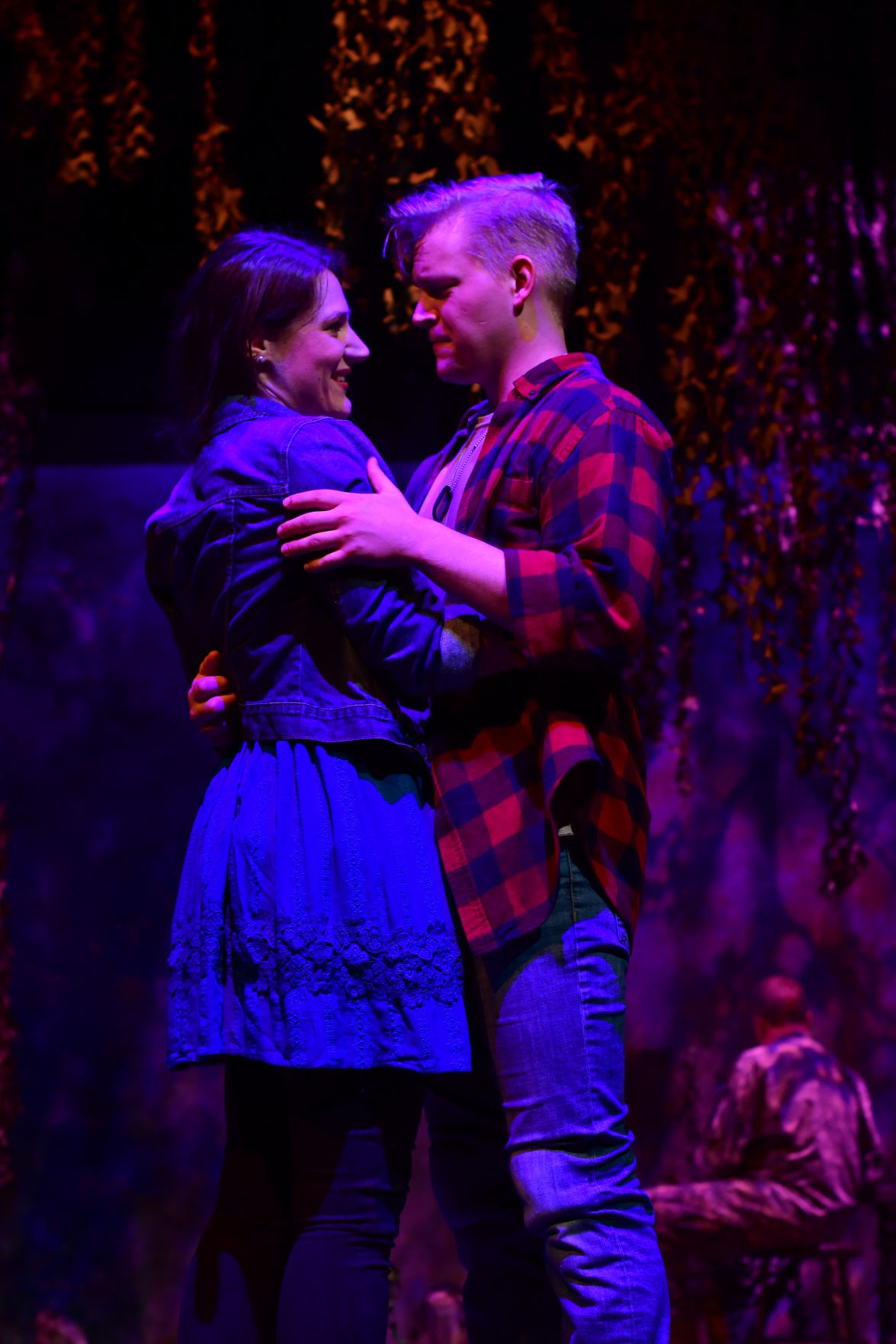 Marjorie Gast, left, and Keenan Odenkirk in "A Green River."

In a December 2013 review of "A Green River" — a powerful, profound play by Davenport's Aaron Randolph III about war, post-traumatic stress and the arc of a man's life — I wrote that I didn't think it possible for it to improve after its July 2013 premiere at QC Theatre Workshop.

At the Augustana College production, then at Potter Hall, directed by 1973 Augie alumnus Phil McKinley, I was wrong. And in the deeply moving play's third Q-C iteration (also led by McKinley), this time under the professional Mississippi Bend Players at the Brunner Theatre, it's jaw-droppingly impressive and an even more fully-realized, towering achievement.

In a talkback with the audience after the first new performance, the acclaimed director likened “A Green River” to a concerto for soloist and orchestra. The protagonist is Army soldier Erik White, having been deployed in harrowing battle, returns home to a world he no longer recognizes. A traumatized Erik must face challenges of everyday life, including bearing the weight of his haunted memories while struggling with a war he can't leave behind.

The brilliance of “A Green River” is not simply contrasting his Army experience — where Erik knew exactly his role and how to carry it out — with the unstructured chaos of normal life, where he can't make friends at a boring warehouse job and can't seem to make his wife happy. Randolph and McKinley place seven key characters in Erik's life on stage throughout the intermission-less play — and the nonlinear scenes jerk way back and forth across the years, presenting the flashback moments as playing out in his tormented mind.

The true ensemble piece lets each of these colors of the theatrical orchestra shine through. Given the intensity and drama of the subject, and the conflicting, multiple voices in Erik's head, that “music” often becomes harsh and dissonant.

The play takes its title from its setting on a riverfront, where Erik would fish with his dad and brother, Jeff. Poignant excerpts from the John Fogerty 1969 song, “Green River,” are also sung by cast members at a variety of points in the story — and one of Randolph's re-writes has sections where the whole group sings together, which is quite affecting.

It's hard to overstate how superb and spot-on each actor is, led by the charismatic, extraordinarily emotional Keenan Odenkirk as Erik. The 2018 Augie grad has the biggest challenge, not just because he's part of every scene, but many of them are brief and require Odenkirk to convincingly reflect his role from age 5 through adulthood and its major milestones.

Among the touching memories are Erik's interactions with his parents, especially Jeremy Mahr as his stern, supportive father, coaching him in football and offering life advice. Despite the heavy subject matter, Randolph intersperses several lighter moments — including funny family scenes, particularly with Erik's wild, exuberant brother (a wonderful Joshua Malone), and flirty, romantic bits with his lifelong love, Amy (a sympathetic Marjorie Gast).

Filling the fantastic cast are Danny Fapp as Erik's Southern battlefield buddy, Jason; Megan Cox as his loving mom; Mike Schulz as his brutally harsh sergeant, and Shelley Cooper as his by-the-book counselor.

McKinley's apt orchestra metaphor could be extended to the MBP crew, who elevate “A Green River” to a transcendent work of art. Veteran scenic designer Susan Holgersson, lighting designer RaeEllen Walker and sound designer Joseph Oliger create both dreams and nightmares that are mesmerizing. I was especially taken with a lighting effect that makes it appear as if we're actually under water.

The play contains adult language and content, including depictions of battlegrounds, gunfire and death that could be triggering for some audience members. It's intended for mature audiences only. MBP is partnering with Quad City Veterans Outreach Center to promote their programs and services, and serve as a donation drop-off throughout the run of the show. Monetary donations as well as paper goods (toilet paper, paper towels, Kleenex) and kitchen items (aluminum foil, plastic wrap, Ziploc bags) will be accepted.

Performances continue 7:30 p.m. Friday and Saturday, and 2 p.m. Sunday. Tickets are $15-$20, with $10 admission for all military, veterans and their families, and each performance will feature a talk-back with military veterans, the show's cast and director. For more information and reservations, call 309-794-7306 or visit MississippiBendPlayers.com.

Megan Cox, left, and Keenan Odenkirk perform in a scene from "A Green River."

Jeremy Mahr, left, and Keenan Odenkirk in "A Green River."

Keenan Odenkirk, left, and Marjorie Gast perform in the new Mississippi Bend Players' production of "A Green River," an intense drama about a soldier trying to cope with PTSD.

Marjorie Gast, left, and Keenan Odenkirk in "A Green River."