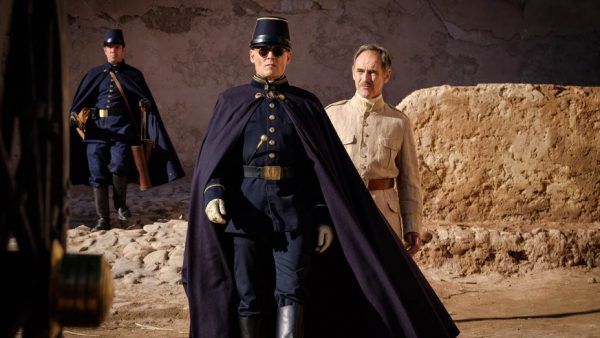 "Waiting for the Barbarians"

“Waiting for the Barbarians” isn’t an easy watch. But, even for those who might cringe at the cruelties inflicted on many of its characters, it’s a somber story that could be considered a morality play —set in the past but reflective of modern times.

Based on the 1980 novel by JM Coetzee, it is directed by Ciro Guerra (“Embrace of the Serpent”) it was nominated for Best Film at the Venice Film Festival.

The marvelous Mark Rylance, who earned an Academy Award for Best Performance by an Actor in a Supporting Role in “Bridge of Spies” is The Magistrate, a smart, kind man who leads an outpost in the middle of the desert, some time in the past.

State security officers, led by Colonel Joll (Johnny Depp) arrive. Depp, with his scissor-like sunglasses reminiscent of another character he played in a Tim Burton film, has no use for humor or emotion.

He has come for one reason: To inflict pain on the indigenous people, the “barbarians,” outside the outpost, as well as those who might have “inappropriate” relationships with them.

A peaceful, wise man, The Magistrate governs the outpost according to his own moral compass, settling disputes without much drama.

Depp believes a frontier war is about to break out, and he and his men begin to torture and kill local residents. “I have orders to obey,” he announces.

Robert Pattinson is in a small role as another villainous character under Joll’s command.

The Magistrate comes upon an extremely ill indigenous woman listed in the credits only as The Girl (Gana Bayarsaikhan, "Ex Machina") who barely can walk and has trouble seeing.

The Magistrate has feelings for her immediately — possible guilt mixed romance — and shelters her as best he can.

I wanted to turn away several times during the movie, which proves how quickly and easily power can thwart justice and peace. This certainly isn’t for children or the faint of heart.

Depp is a narcissistic, cruel villain you’ll love to hate. It’s wonderful to see Rylance as the fair-minded man, desperate to keep the peace and protect the people around the outpost, still cling to hope even though he is gradually overwhelmed by the force of Joll and his men.

The cinematography is splendid, with some dazzling desert environments especially noteworthy.

And the last few seconds of this almost-Orwellian fable are satisfying indeed in a finale worth waiting for.

'Waiting for the Barbarians'

Running time: One hour and 52 minutes.

Unrated, but similar to an “R” for foul language, scenes of torture and violence.

Here's a look at what's arriving on TV, streaming services and music platforms this week.

"Waiting for the Barbarians"