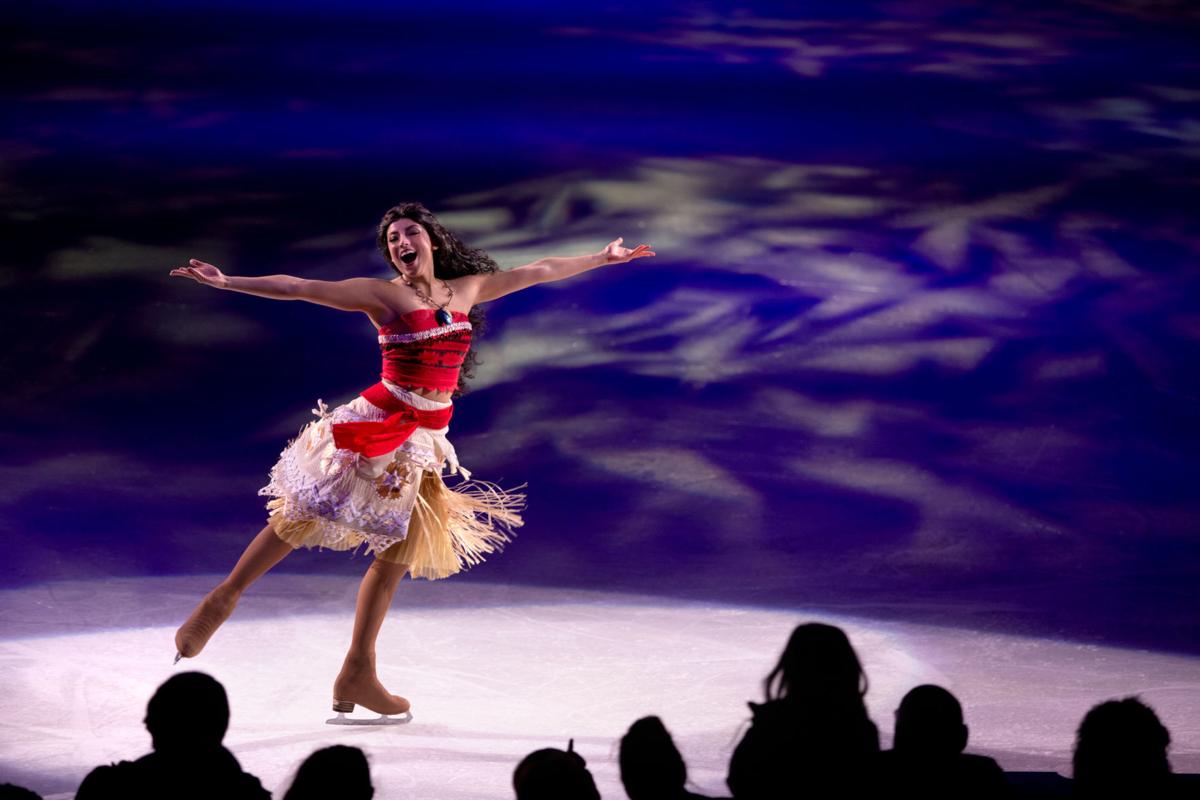 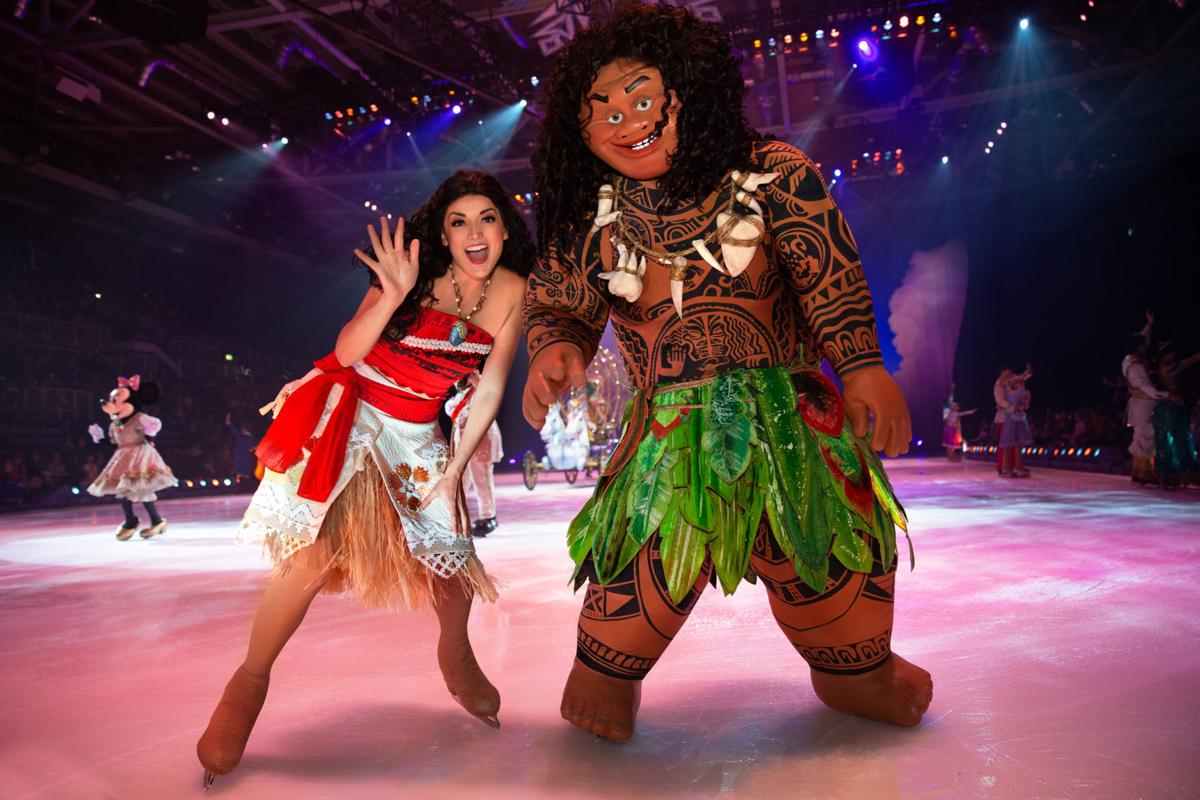 Laura Chavez as Moana with Maui the demigod from "Disney on Ice." 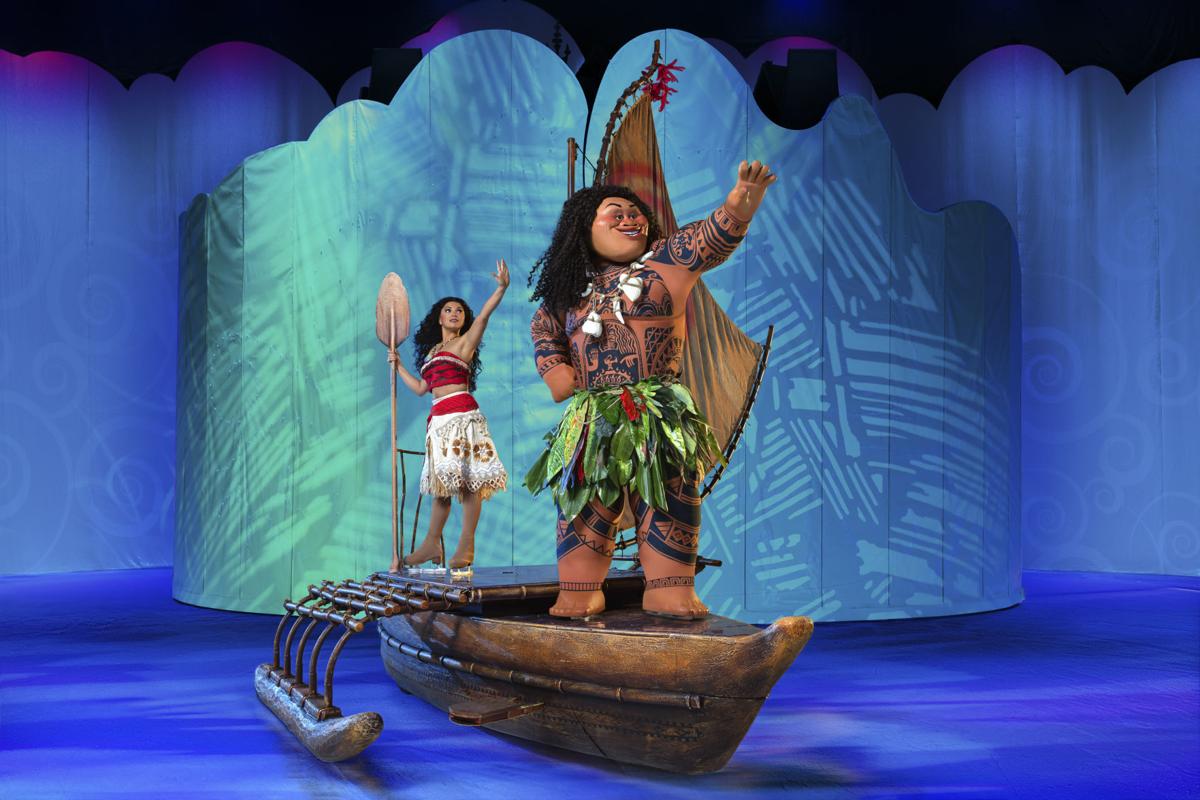 A "Moana" scene in the new "Disney on Ice Presents Dream Big," coming to the TaxSlayer Center Dec. 5-8.

MOLINE — Laura Chavez relishes the opportunity to share her culture — and learn about the culture of others.

The 26-year-old native of San Jose, Calif., has skated as Belle on the "Disney on Ice" tour. She's now joined a diverse cast in playing the title character of “Moana,” the 2016 animated Disney film, as part of “Dream Big,” her sixth Disney skating tour. The show glides into Moline's TaxSlayer Center for seven shows Dec. 5-8.

“We have people from all over the world in the cast — Mexico, Canada, Japan, Russia, Ukraine, 11 different countries,” Chavez, a Mexican-American, said in a telephone interview. “It's awesome. I love sharing my culture, being able to learn other people's culture. It opens up your eyes and minds to that different part of the world. I grew up this way, but at the end of the day, we're all doing the same job.

“It's great — I come out on ice on a boat, and so many kids are screaming, singing along. It's a cool moment in the show.”

The daughter of Mexican immigrants, she doesn't play a Latina as Moana, the strong-willed daughter of a chief of a Polynesian village, chosen by the ocean itself to reunite a mystical relic with the goddess Te Fiti. When blight strikes her island, Moana sets sail in search of Maui, a legendary demigod, in the hope of returning the relic.

Chavez appreciates the stormy emotions her character endures, from fear to breakdown, to determination and courage.

“Our lighting department is awesome; they do a great job making the ice look like it's moving, with special effects, the sound of the ocean,” she said. “Moana is very specific with her movements, slow everything down. It looks like she's swimming in water.”

Last year, in a “Disney on Ice” production, she performed as Belle in the “Beauty and the Beast” segment and its exuberant “Be Our Guest” showstopper.

“It's a very interesting process, casting with the show. I don't have the typical Mexican look,” Chavez said. “I'm very light-skinned, have sharper cheekbones, which comes into account. It's nice to play a role now that is ethnic color. Moana is not Hispanic but really cool to bring different colors in. We also have a 'Coco' segment — that's my culture out on the ice.”

In “Dream Big,” audiences can explore the Land of the Dead as Miguel from Disney/Pixar's “Coco” brings the festivities of Dia de los Muertos to the ice. They can also get tangled up in Rapunzel's hair-raising quest to see the floating lights and travel to the kingdom of Arendelle with Anna, Elsa and Olaf in a dramatic retelling of the sisterly love that saved a kingdom (and in the new “Frozen 2,” which raked in the biggest opening weekend of any animated film ever).

“Dream Big” captures all “the magic and adventure of Disney's immortal tales through cutting-edge figure skating, glamorous costumes and stunning set designs,” according to a tour release. “Through innovative lighting and thrilling special effects, audiences are transported to a world of imagination, where heroes of every kind seek to fulfill their dreams.”

Chavez has been realizing her Disney dreams since 2013, skating in tours around the world.

As a young girl, she was not only involved in skating but gymnastics, soccer and ballet. Chavez did competitive skating in Nevada and Arizona until she was 18, when she enrolled at the University of Nevada-Las Vegas, where she majored in criminology with a minor in psychology. She completed her degree this past May.

“I wanted to be more on the performing side; I didn't have a huge competitive drive in me,” Chavez said of skating. “I just wanted to be out there, give show skating a try. The performance aspect of skating is always what I loved.”

“Disney on Ice” also has skaters learn songs and dialogue in other languages, to match the country in which they perform, Chavez said.

“What I like most about my job is that it does not feel like a job at all,” she has said. “I love being an athlete, and the fact that I am now traveling the world doing a sport that I have loved my whole life is truly amazing. I am extremely grateful for this job and the opportunities it has given me. Bringing fairy tales to life and seeing the excitement of not only the kids, but of whole families really makes every show worth it.”

Malik Harris has big, colorful boots to fill in Circa 21's "Kinky Boots"

Here's a look at Meat Loaf through the years. He's best known for the 1977 record "Bat Out of Hell" and a role in the "The Rocky Horror Picture Show."

Best of the week: 9 things to do in the Quad-Cities

Looking for something to do this week? Here are 9 things to do in the Quad-Cities.

Betty White just turned 98. Here's a look at the life of the Emmy-award winning actress.

DAVENPORT — Ice sculptures are literally cool, and a hot centerpiece for parties and receptions, says Matt Meadows, who coordinates the 8th-an…

DAVENPORT — Whenever you're in the house of the Juarez brothers, you're home.

WASHINGTON (AP) — President Donald Trump’s impeachment trial in the Senate promises to be one of the most heavily scrutinized events in American political history. But the journalists covering the trial are warning that restrictions on media access will cripple their ability to do their job.

Laura Chavez as Moana with Maui the demigod from "Disney on Ice."

A "Moana" scene in the new "Disney on Ice Presents Dream Big," coming to the TaxSlayer Center Dec. 5-8.