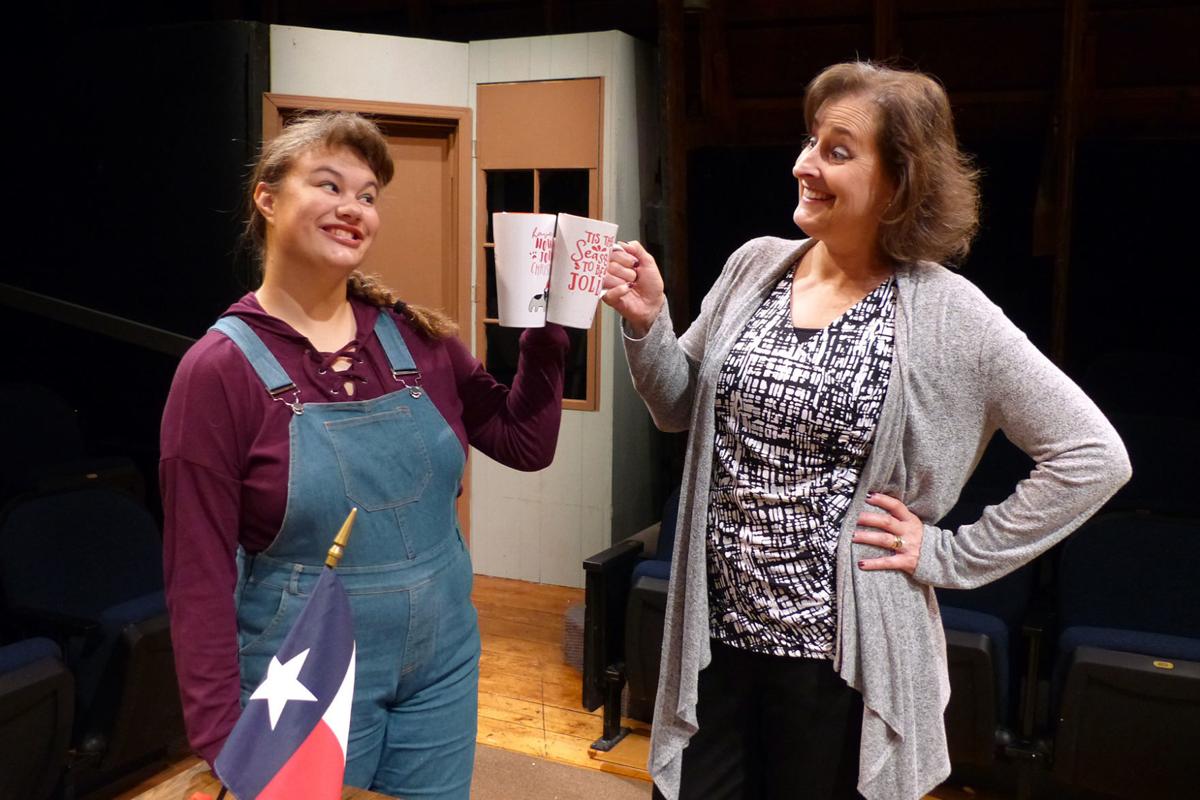 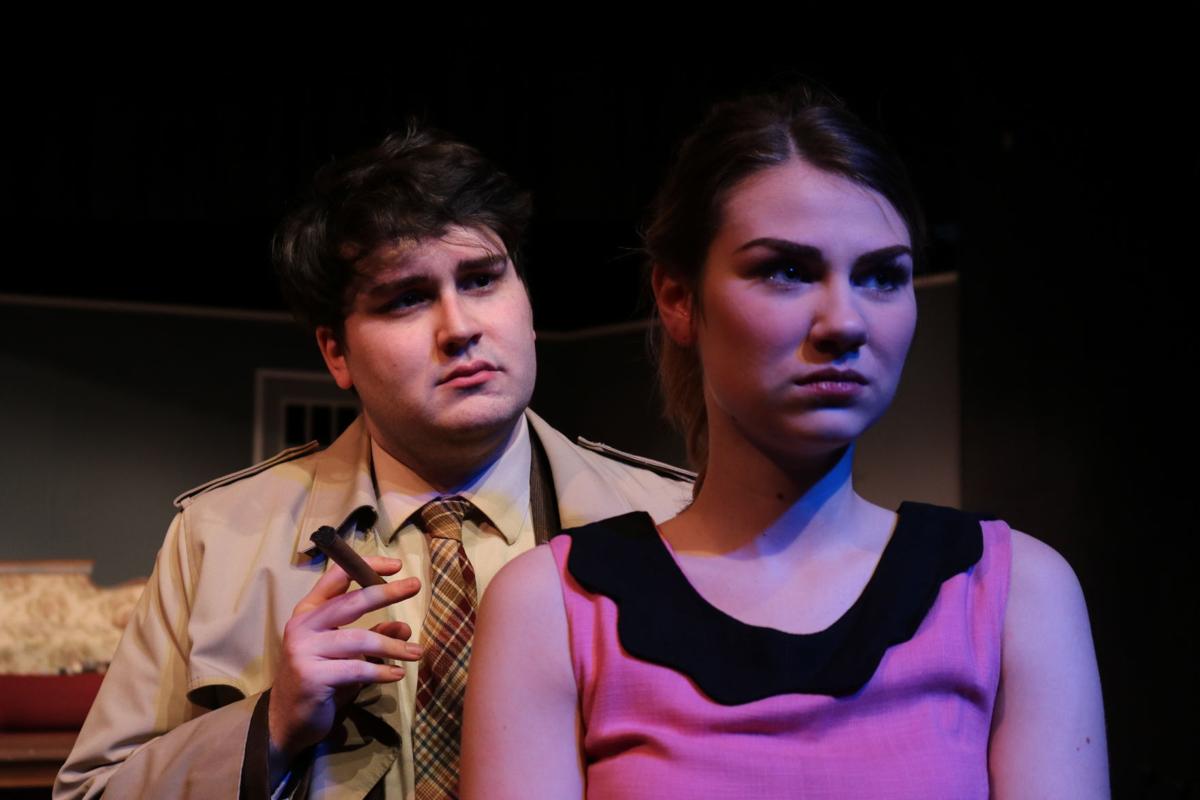 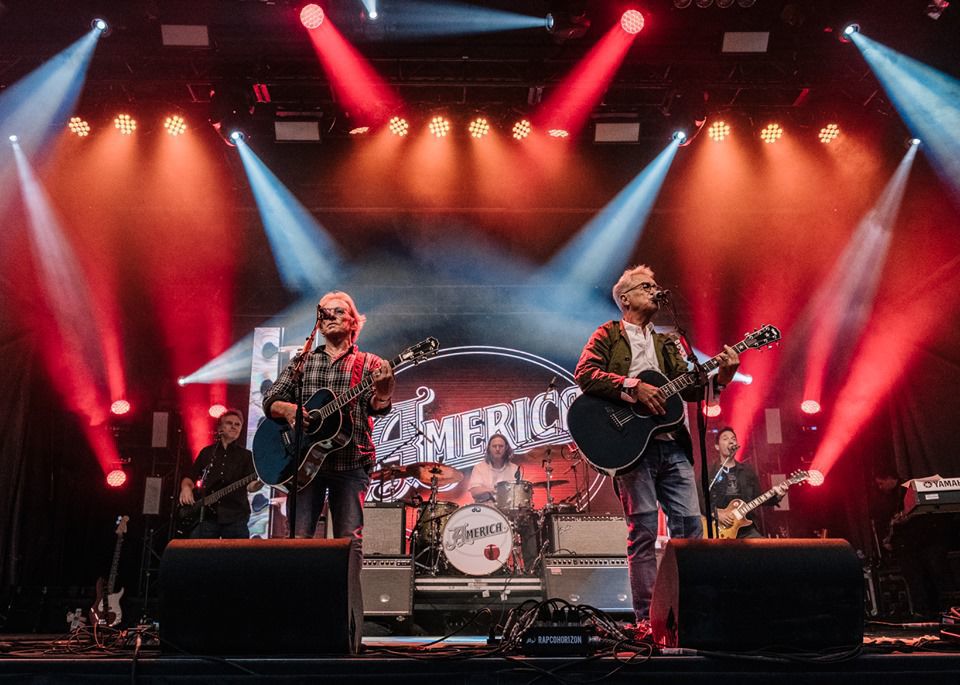 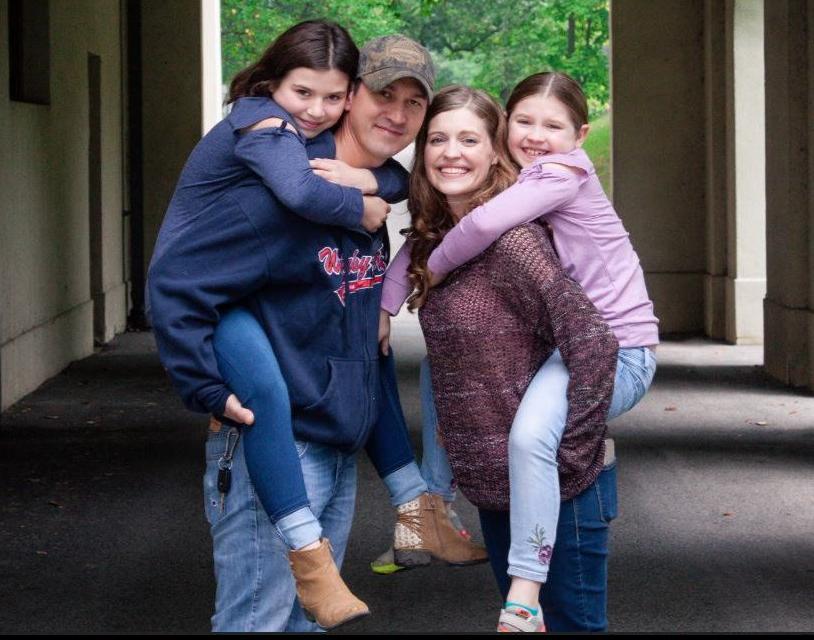 Robyn Messerly (second from right) with her husband Allen and daughters Clara and Grace.

In the story, it's Christmastime in the newest — and tiniest — town in Texas. And it’s beginning to look a lot like trouble in Doublewide. Not only are the trailer-park residents dealing with the stress of the holiday season, but they’ve just discovered that Doublewide is being double-crossed by the county, according to a synopsis. With their official incorporation papers in jeopardy, this band of eccentric Texans take on the “Big Guys.”

Determined to bolster their legitimacy, they first set their sights on the county-wide “Battle of the Mangers” competition. They conspire to win this smackdown with their “Nativity at The Alamo” entry, by any means possible. A review of a recent Ohio production (at thevwindependent.com) said, “Audience members will find themselves both laughing and empathizing with the off-beat residents of Doublewide."

Performances will be 7:30 p.m. Thursday to Saturday and matinees at 3 p.m. Sundays. Tickets are $12, available by calling 309-944-2244 or visiting rhplayers.com. Late seating is not permitted; no one will be admitted to the theater after the show has started.

The final production of the season at Playcrafters Barn Theatre, 4950 35th Ave., Moline, is "Prescription: Murder" by Richard L. Levinson and William Link. This classic thriller served as the inspiration for the playwrights' hit TV series "Columbo" (1968-78) and has been delighting audiences for over 50 years.

In the play, a brilliant psychiatrist and his mistress concoct a plot to murder his neurotic, possessive wife. Getting away with it depends on pulling off a bizarre impersonation, according to a synopsis. But a certain cigar-smoking detective is on the case, and Lieutenant Columbo engages in a cat-and-mouse game with the doctor that culminates in a surprising climax. Columbo must battle the psychiatrist in a duel of wits until the doctor succeeds in having the detective removed from the case.

A 2010 review of an English production, from britishtheatreguide.info, said: “The play is like a flabbier version of a 'Columbo' TV episode. The setup and the murder seem to take a long time before the hero shuffles out of the bedroom to confront the person who turns out to be the murderer, whom he proceeds to irritate and wear down for the rest of the play.”

The classic rock group America will perform at 8 p.m. Saturday at Rhythm City Casino's Event Center, 7077 Elmore Ave., Davenport. Tickets ($35-$75) are available at rhythmcitycasino.com, at 844-852-4FUN or in person at The Market gift shop inside Rhythm City Casino Resort.

This year marked the 49th anniversary of the band. Founding (and continuing) members Gerry Beckley and Dewey Bunnell (along with former band mate Dan Peek) met in high school in London in the late 1960s and quickly harmonized their way to the top of the charts on the strength of their signature song “A Horse With No Name,” according to their bio.

By the mid-'70s, inter-band conflicts combined with an exhaustive touring and recording schedule exacted its toll on the group, and Peek left the group in 1977.

America has amassed six certified gold and/or platinum albums, with its first greatest-hits collection, “History" (1975), hitting 4 million-plus in sales, according to a tour release. Their many hit singles include “Sister Golden Hair,” “I Need You," “Ventura Highway,” “Don’t Cross the River,” “Tin Man,” “Lonely People” and “You Can Do Magic."

A review of a March 2019 show in Massachusetts (at itemlive.com) said: “All sounded great, with the harmonies of founders Gerry Beckley and Dewey Bunnell (Dan Peek, the third original member, died in 2011) as wondrous as when the band’s songs dominated pop radio. They were aided by three stellar musicians: bassist/backing vocalist Richard Campbell, lead guitarist/banjoist/keyboardist Steve Fekete, and drummer Ryland Steen. This is a tight outfit, finely honed by performing some 100 shows a year.”

Cancer messed with the wrong dancer

A special cabaret fundraiser will be held at 5 p.m. Sunday at the Spotlight Theatre, 1800 7th Ave., Moline, for Robyn Messerly — a busy wife, mom and dance teacher who was diagnosed earlier this year with colorectal cancer. A GoFundMe page — created in October, titled “Cancer Messed With the Wrong Dancer” — has raised $4,005 toward a $5,000 goal.

A teacher at Kim's School of Dance and Tumbling in Moline, Messerly had gastrointestinal symptoms this past spring and assumed they were temporary and related to busy life, according to the page. However, her doctor felt a colonoscopy was indicated, even though she's only 38, and this past May she was diagnosed with stage 3 colorectal cancer. Messerly's treatment requires chemotherapy (she's currently been undergoing this in the Q-C since June), radiation and surgery at the University of Iowa Hospitals and Clinics in Iowa City, Iowa.

The Sunday Spotlight benefit is to help cover the medical costs, as well as costs of traveling for medical appointments and loss of income during the time Messerly will be unable to work. “Robyn is a caring, loving, incredible person who is loved by so many members of this community,” according to the event's Facebook page. “She is an integral part of the performing arts community, and we want to give back to her the love and compassion she has given to so many.”

Her daughters Clara and Grace were in the Spotlight production of “Matilda,” and Kim's School of Dance has held its recital at the Spotlight every year, venue co-owner Sara Tubbs said.

Tickets for the benefit are $10 for adults and $5 for children, available at thespotlighttheatreqc.com. There will be a taco bar, silent auction, a 50/50 raffle and a live performance (including from Kim's School of Dance). The bar will be open and desserts will also be for sale.

While gyms, some area parks and more have temporarily closed and travel has screeched to a halt during the COVID-19 pandemic, fitness enthusiasts and families are taking to the streets and bike paths, and scooping up bicycles faster than area stores can build them.

As the large, green crane hummed, Les Bruning’s 600-pound sculpture dangled overhead, its cutouts boldly standing out against the bright blue sky, revealing the silhouettes of half a dozen faces all around it.

Rolling Stones threaten to sue Trump over using their songs

LONDON (AP) — The Rolling Stones are threatening President Donald Trump with legal action for using their songs at his rallies despite cease-and-desist directives.

GENESEO — For the past 30 years on July 4, residents and visitors have gathered in Geneseo City Park for the Maple City Band’s Patriotic Concert and ice cream social. This year, the park will be quiet on July 4, but people can still hear patriotic music from Maple City Band members.

For third time this month, Fox News leads all networks

It all began in early May when an American TikTok user sparked howls of rage with her controversial guide to making "hot tea." The themes in the furious outpouring of comments were "war crime" and "diabetes."

Robyn Messerly (second from right) with her husband Allen and daughters Clara and Grace.