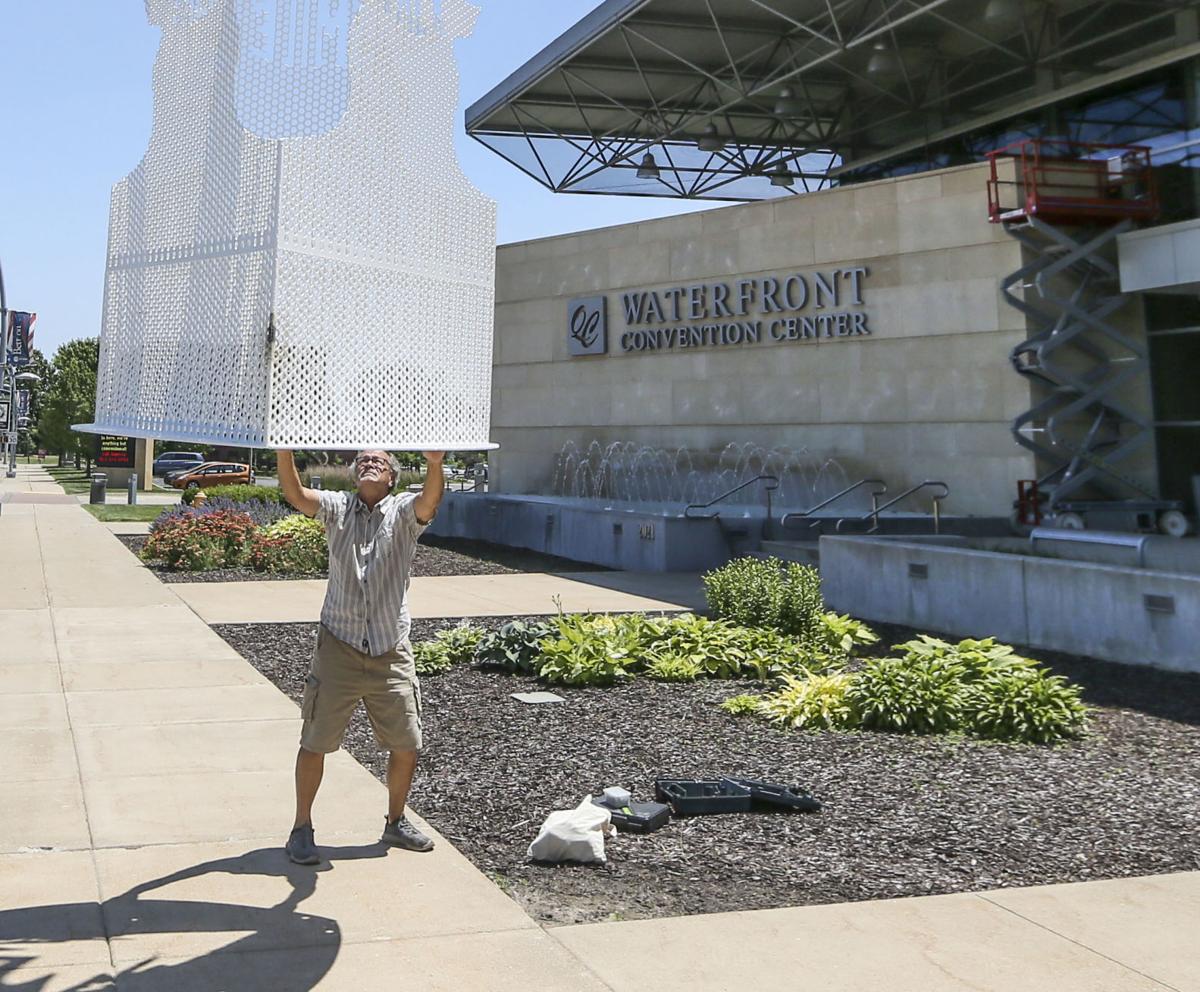 Les Bruning, a Nebraska sculptor, finds the perfect place for his work of art at the Waterfront Convention Center in Bettendorf with the help from a Hampton Crane operator. 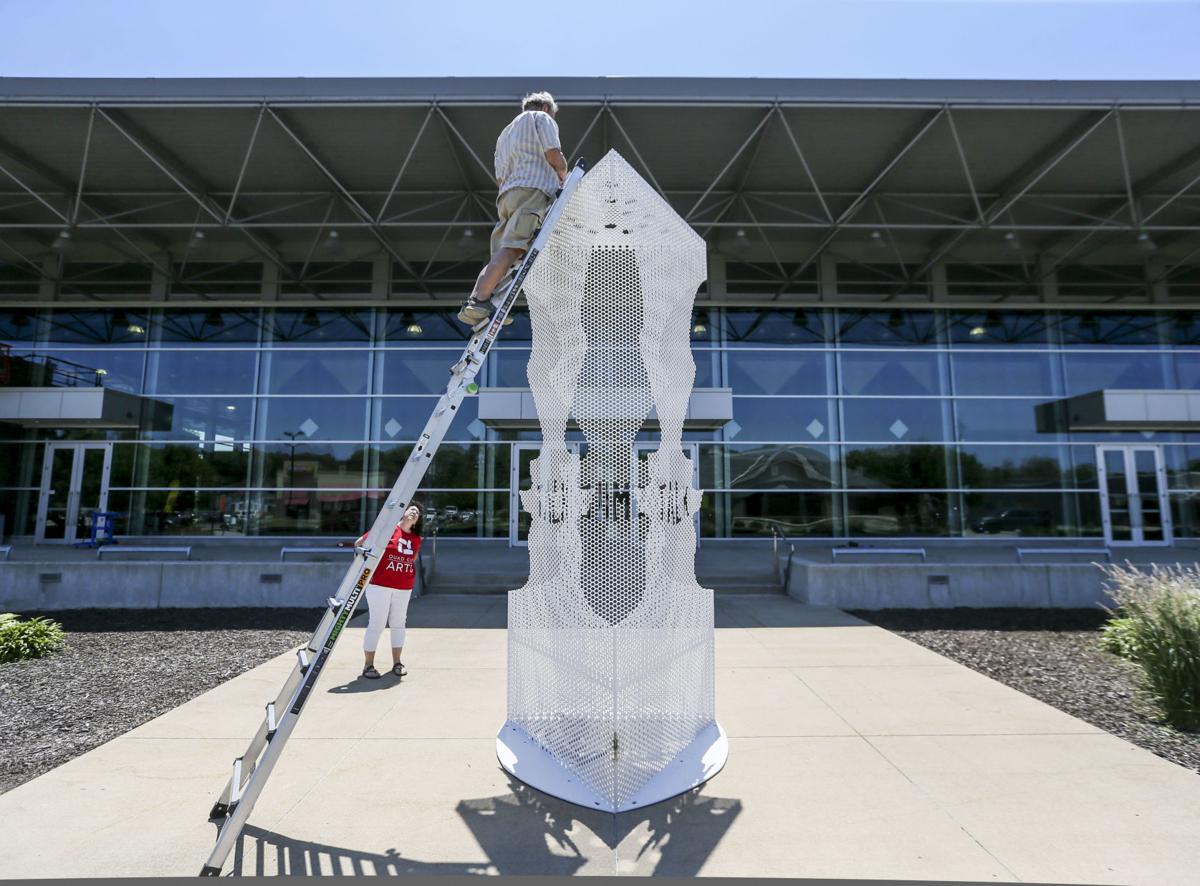 Scuptor Les Bruning climbs a latter to fix his sculpture at the Waterfront Convention Center. 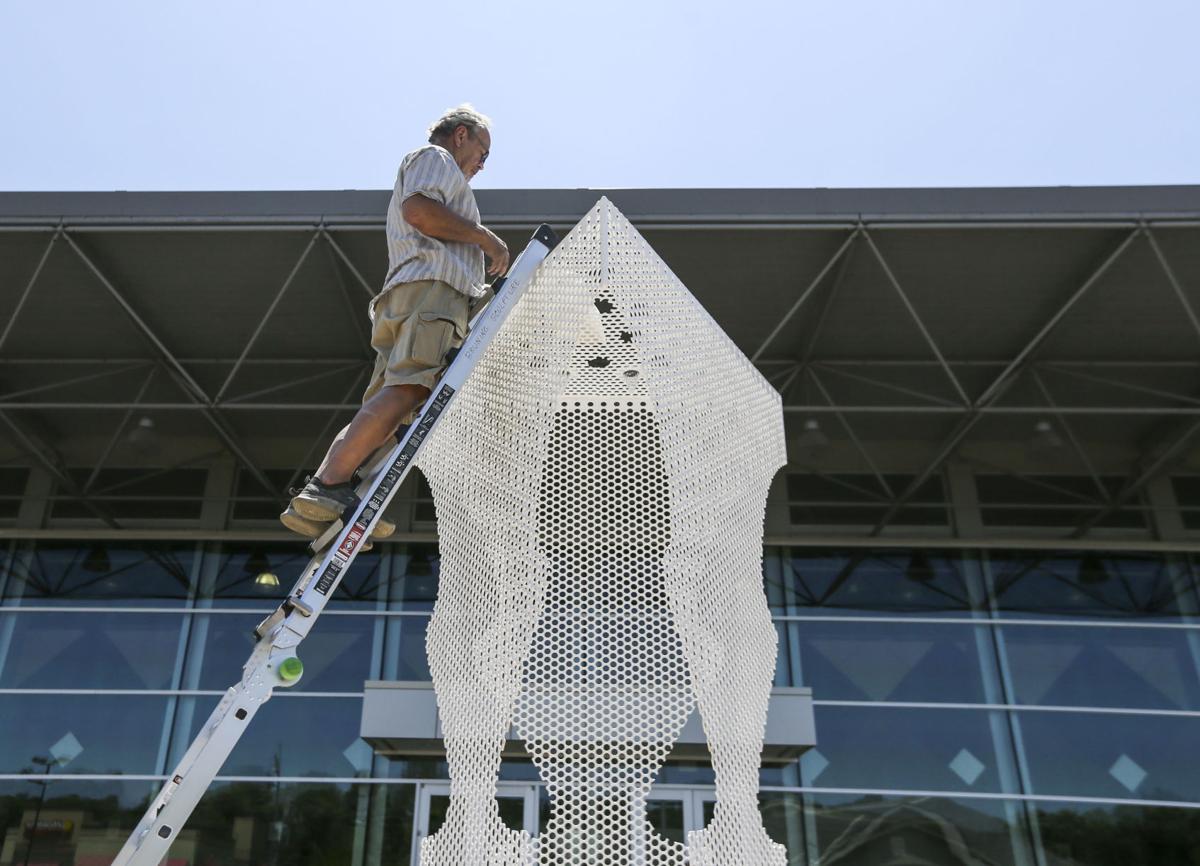 Les Bruning, a sculptor from Nebraska, places lights in his sculpture at the Waterfront Convention Center in Bettendorf on June 16. 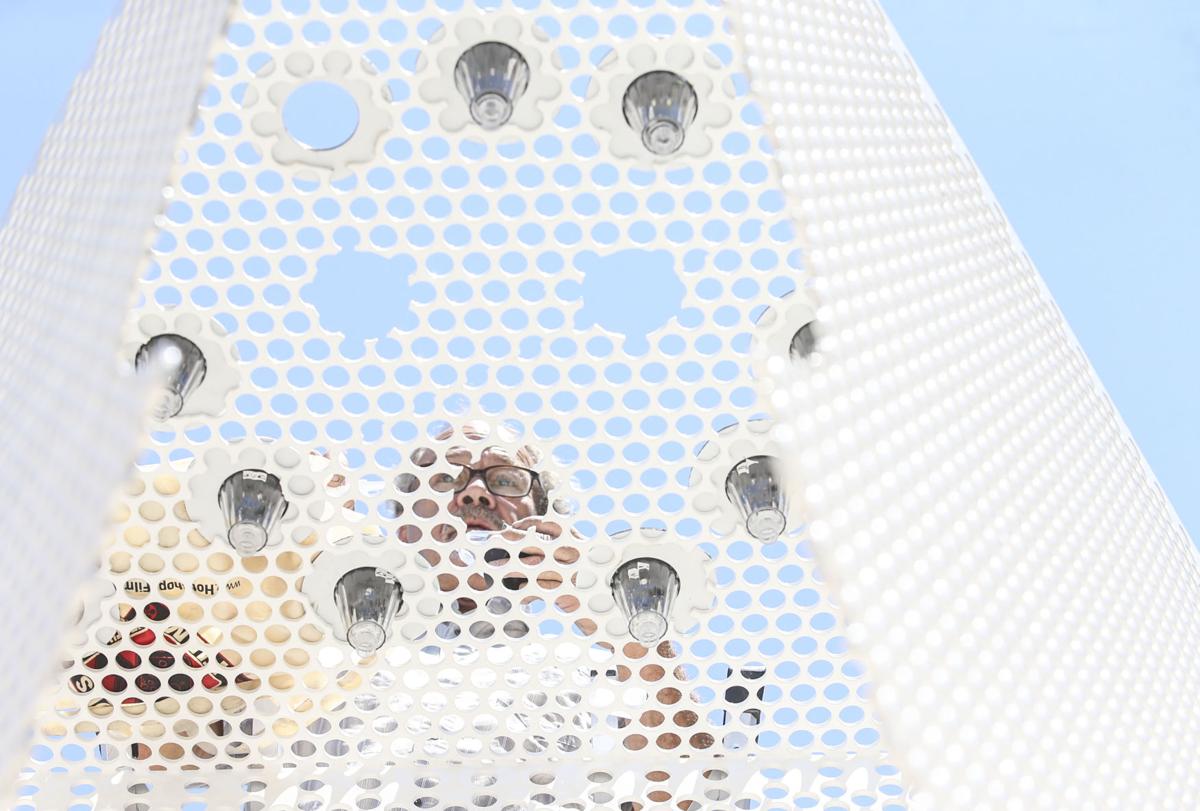 Les Bruning, a sculptor based out of Nebraska, places lights in his sculpture at the Waterfront Convention Center in Bettendorf. 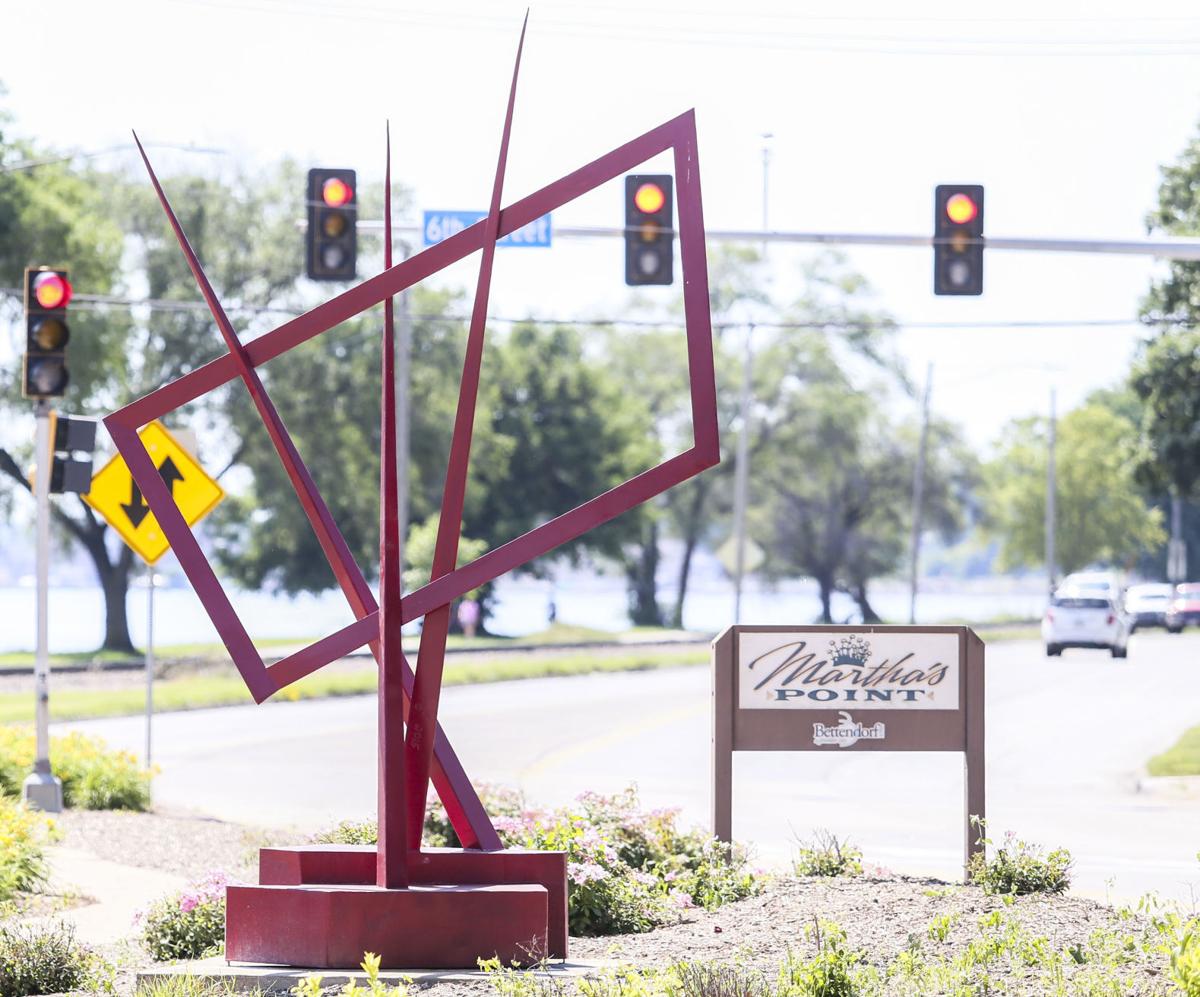 At Martha’s Point on State Street and River Drive, “Windows” by Paul Bobrowitz was installed in Bettendorf on June 16, 2020. 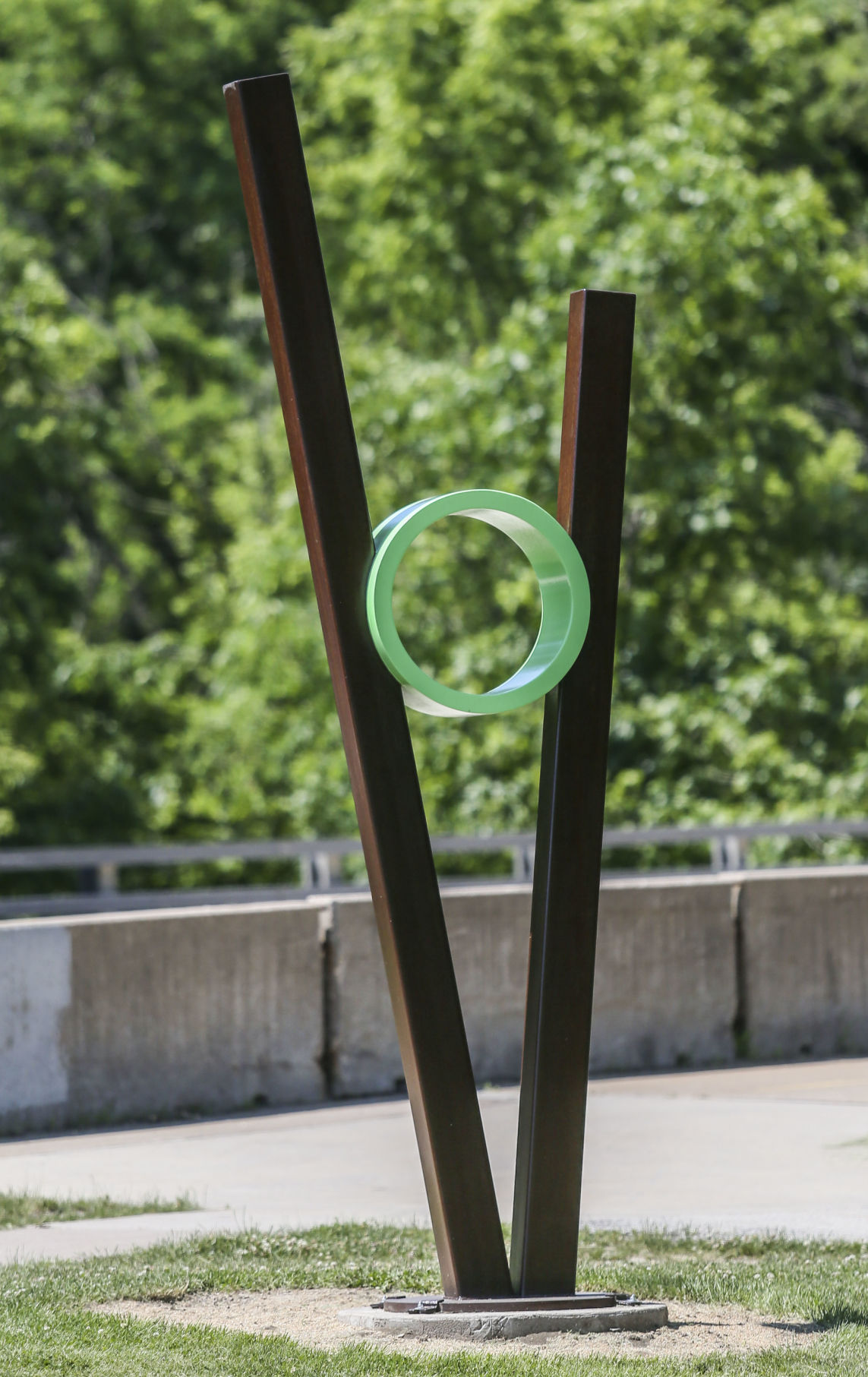 At the entrance of Veteran’s Memorial Park in Bettendorf stands “Triumph” by Ben Pierce of Cape Girardeau, Mo.

As the large, green crane hummed, Les Bruning’s 600-pound sculpture dangled overhead, its cutouts boldly standing out against the bright blue sky, revealing the silhouettes of half a dozen faces all around it.

Bruning grabbed ahold of its base and gently guided it into place in front of the Quad-Cities Waterfront Convention Center in Bettendorf on Tuesday, June 16.

The roughly 12-foot-tall galvanized and powder-coated steel sculpture called “Talk, Talk, Smile,” will be on exhibit there through June 5, 2021, as part of this year’s Quad City Arts’ lineup of public sculptures in Rock Island and Bettendorf. It is one of Bruning’s “street conversations” pieces that features a sort of translucent triangle with the silhouettes of smiling, chatting faces, as well as solar lights to light it up at night.

“Street conversations” are “exactly the kind of conversations that we need to be having this year, so it’s a very timely piece,” said the artist, whose studio is in Omaha, Nebraska. “But I’ve been doing pieces like this for about 10 years.”

Bruning’s is one of six public sculptures in Bettendorf and four in Rock Island that are in the process of being swapped with last year’s selections, said Dawn Wohlford-Metallo, Quad City Arts’ Visual Arts Director. Rock Island has participated in the program since 2007, and Bettendorf has since 2008.

“We’ve been doing this since 2002, and we engage cities and sometimes businesses to get involved,” Wohlford-Metallo said. Then, “we present all the sculptures that we know are available,” and cities and businesses “get their committees together to choose the ones they want, and they decide where they want them.”

The sculptures are available for purchase, and cities often purchase them for permanent display.

In addition to the Waterfront Convention Center plaza and an area just next to the Center, Quad City Arts has facilitated the leasing and installation of sculptures at Faye’s Field, Martha’s Point, Veteran’s Memorial Park, the Bettendorf Community Center and Ascentra Credit Union in Bettendorf; and the Southwest Branch library, near the Genesius Stage in Lincoln Park, Longview Park, the five-point intersection just outside of Longview Park and the Centennial Bridge Visitor’s Center in Rock Island.

“It's something (the community) can engage in,” said Wohlford-Metallo. “People love to take selfies in front of sculptures; people like to talk about them. Sometimes they love them; sometimes they don’t like them, so it gives people something else to think about and do that’s not political or, you know, their everyday thing. It’s something different.”

For the artists who are involved, it offers another chance to share their work with the public. Bruning, who has been an artist for some 50 years, said he currently has about a dozen pieces outside of his studio right now on exhibit in Omaha, Bettendorf and beyond, and he had worked with Quad City Arts a few years ago to place a piece in Rock Island.

“It’s good to be out in public space,” he said. “I think this is a good thing to do, and I’d like to see it continue.”

Just a little ways down State Street near the Waterfront Convention Center stands Moline artist David Zahn’s “Time Passes” sculpture. Zahn, who has sculpted seriously for about 30 years, describes the piece as a person who is kind of getting blown away by the wind, transitioning from one reality to another and morphing from “being here to being somewhere else” — but everyone is welcome to interpret it in their own way.

“My work is almost always based on the figure or on faces,” said Zahn, who is joining this particular exhibit program for the first time.

“My work is about people,” he said, and “kind of the temporary nature of life. … It’s about transitions and about different layers or levels of reality,” touching on “serious aspects of the human experience. …

“We’re part of everything, and everything is part of us. And nothing lasts forever.”

The roughly 4-and-a-half-foot-tall bronze sculpture, which weighs about 200 pounds, stands on a 3-foot-tall steel block, and has been on display in Peoria, Ames and Oskaloosa. “And now it’s here,” Zahn said. “It’s been around a little bit, which is great.”

Besides the piece in Bettendorf, Zahn said he also has pieces on display in Dubuque and West Des Moines, and he has been displaying work on public loan for about five years now.

He said as an artist, it means something to him to get his work out there for others to see. “I’m the type of person that would probably create in a vacuum,” he said, “but it is nice to get work out there and to have people see it.”

Public art serves many purposes, Zahn said. It could be for fun, it can make people think, revisit history and more.

“But the main thing is when you put art in your community, art shows that you care.”

ABOUT TOWN: Check out food trucks, cosplay and Trolls this week

LOS ANGELES (AP) — Authorities said Thursday that they believe “Glee” star Naya Rivera drowned in a Southern California lake but they are continuing the search for her a day after her 4-year-old son was found alone in a rented boat.

Nick Cordero, a Broadway actor who had admirers across the world rallying for his recovery, has died after a battle with COVID-19, his wife Amanda Kloots said.

LONDON (AP) — Johnny Depp said in a London court on Friday that he was left embittered by ex-wife Amber Heard's claims he abused her, which turned him from “Cinderella to Quasimodo” in the public eye.

Country music firebrand and fiddler Charlie Daniels, who had a hit with "Devil Went Down to Georgia,"' has died at age 83.

Naked men and drunks: England assesses the reopening of pubs

LONDON (AP) — It seems to have been more like a typical Saturday night than a drunken New Year's Eve.

Les Bruning, a Nebraska sculptor, finds the perfect place for his work of art at the Waterfront Convention Center in Bettendorf with the help from a Hampton Crane operator.

Scuptor Les Bruning climbs a latter to fix his sculpture at the Waterfront Convention Center.

Les Bruning, a sculptor from Nebraska, places lights in his sculpture at the Waterfront Convention Center in Bettendorf on June 16.

Les Bruning, a sculptor based out of Nebraska, places lights in his sculpture at the Waterfront Convention Center in Bettendorf.

At Martha’s Point on State Street and River Drive, “Windows” by Paul Bobrowitz was installed in Bettendorf on June 16, 2020.

At the entrance of Veteran’s Memorial Park in Bettendorf stands “Triumph” by Ben Pierce of Cape Girardeau, Mo.