'They're ready to get back to trading': Quad-City area farmers have received more than $121 million in aid during trade wars
View Comments
Share this
Return to homepage × 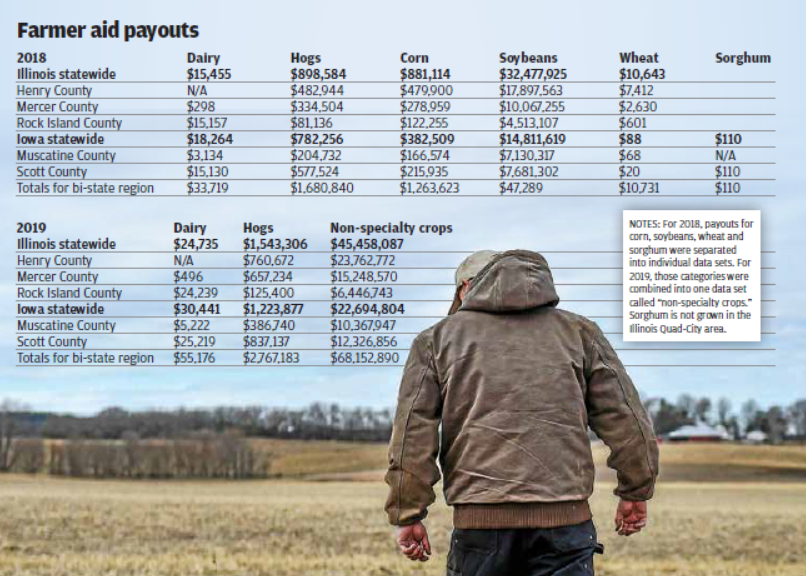 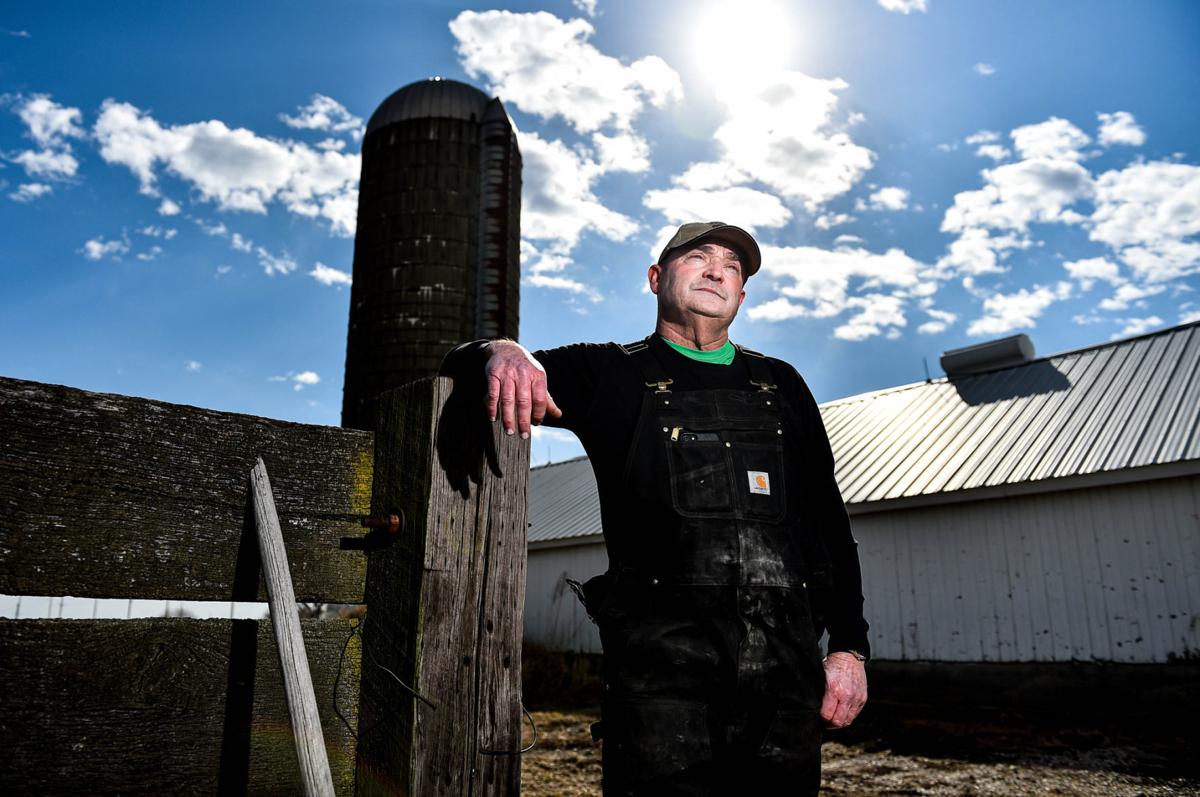 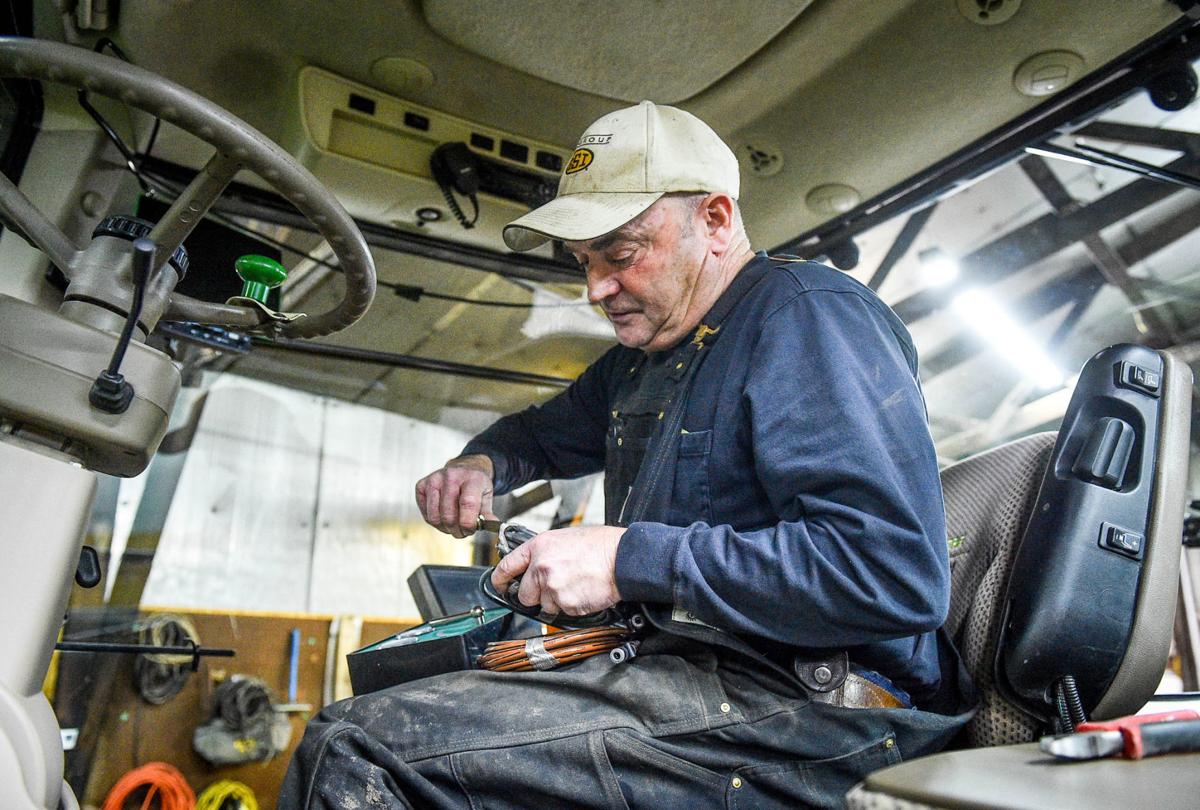 Dennis Verbeck, president of Henry County Farm Bureau, works on hanging devices inside the cab of his tractor Thursday, March 5, 2020, in Sheffield. 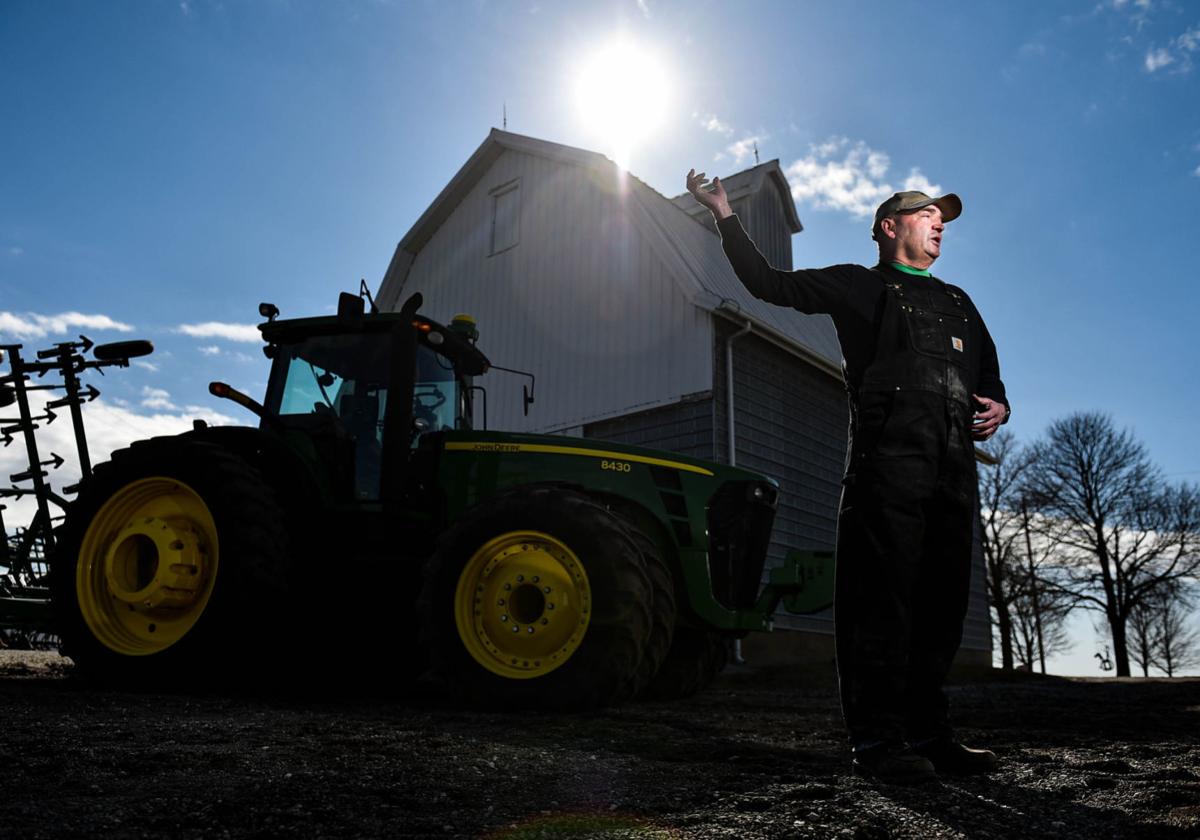 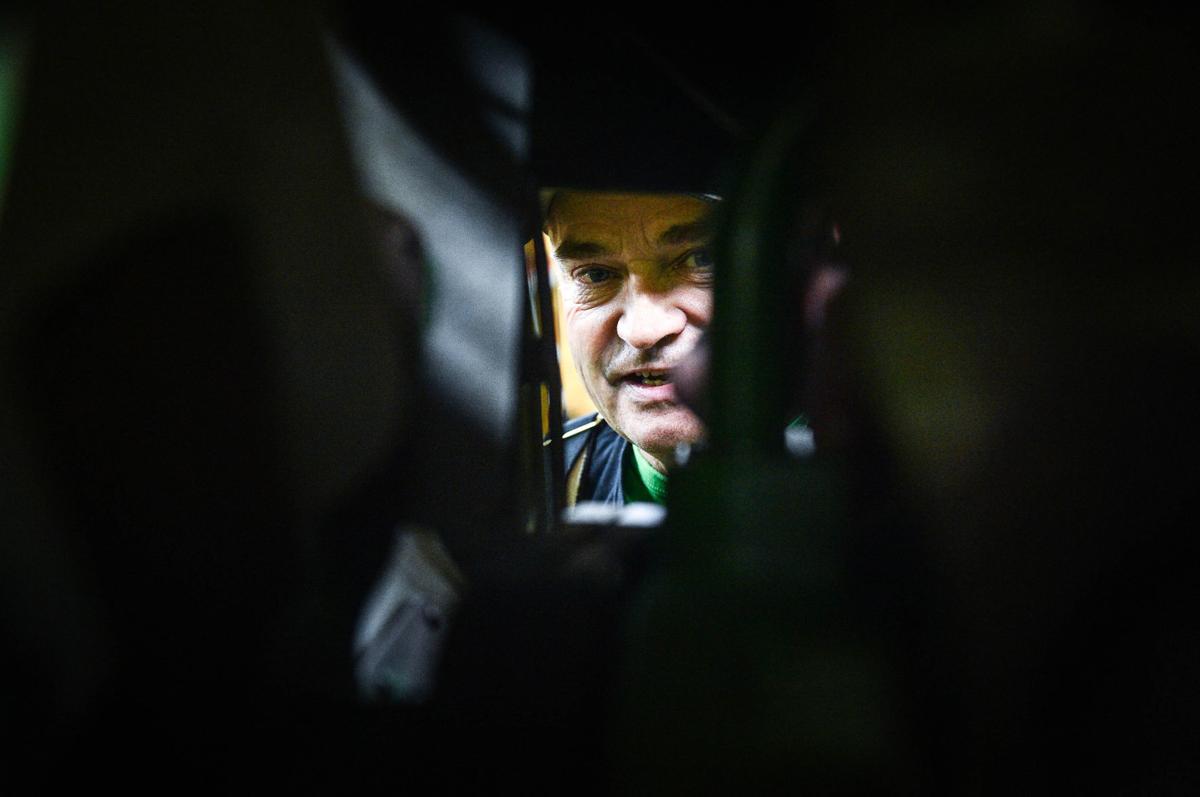 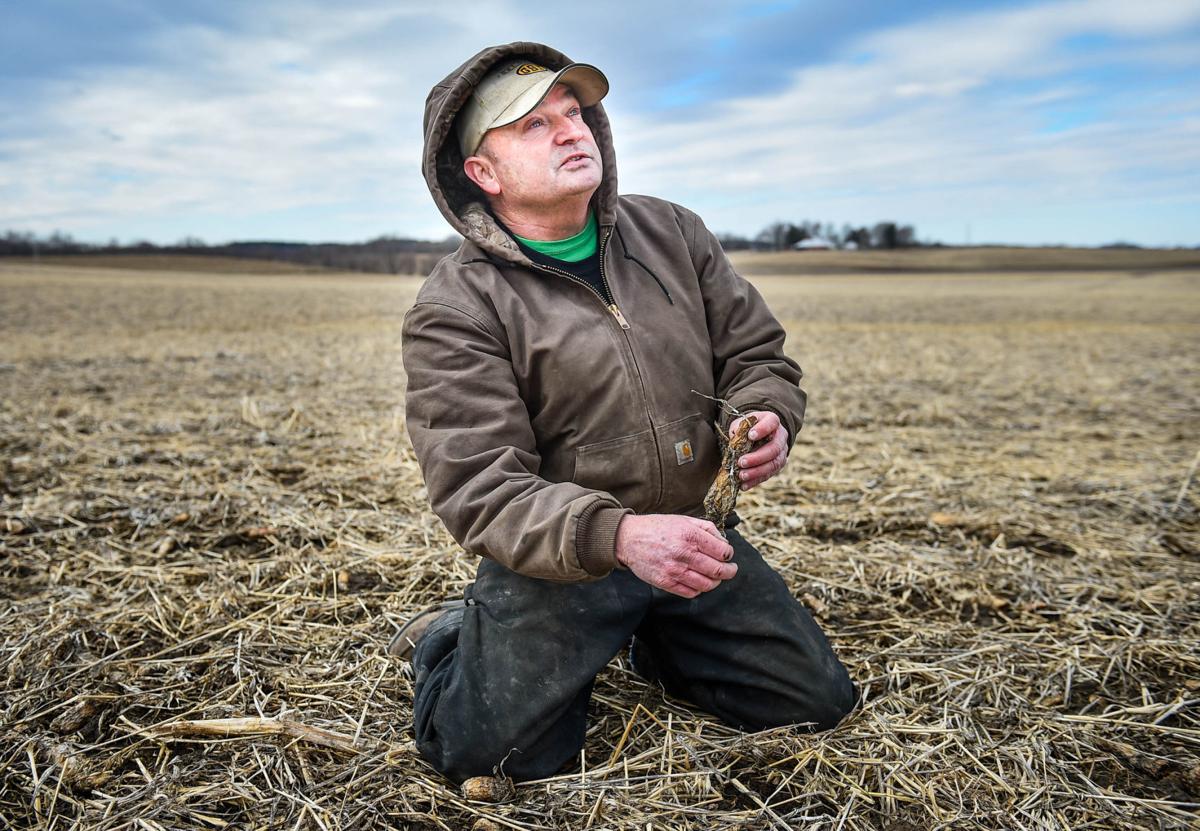 Dennis Verbeck, president of Henry County Farm Bureau, shows off planter oats and tillage radishes on a 75-acre section of land south of Annawan that could not be planted last year Thursday, March 5, 2020. Those two crops, of what’s known as cover crops, helped avoid soil erosion and brought nutrients closer to the surface for where Verbeck plans to plant soybeans this year. 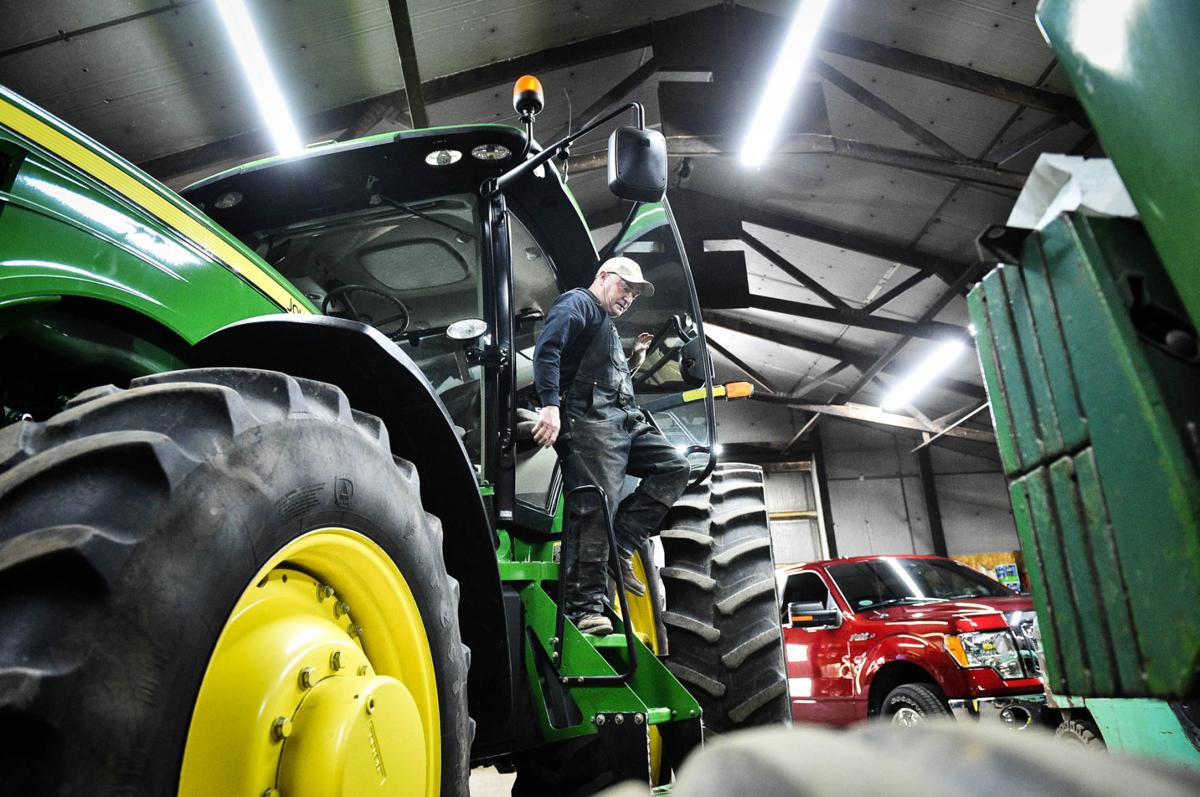 Dennis Verbeck, president of Henry County Farm Bureau, climbs out of the cab of his tractor Thursday, March 5, 2020, in Sheffield. 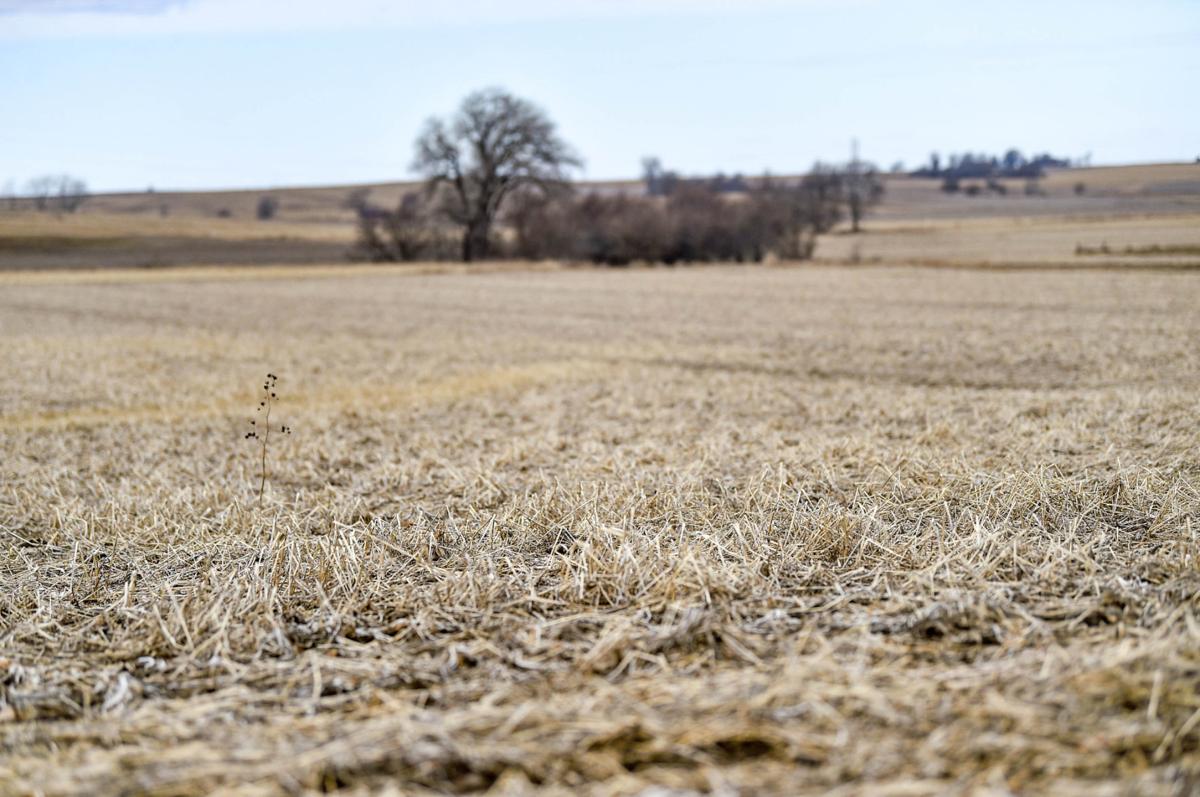 Dennis Verbeck’s, president of Henry County Farm Bureau, planter oats and tillage radishes on a 75-acre section of land south of Annawan that could not be planted last year Thursday, March 5, 2020. Those two crops, of what’s known as cover crops, helped avoid soil erosion and brought nutrients closer to the surface for where Verbeck plans to plant soybeans this year.

Farmers across the U.S. said “trade, not aid” when the market facilitation program, intended to offset lost wages in the agriculture sector, was first announced in summer 2018.

Now, after two years of an ongoing trade wars between the U.S. and its trading partners, and two rounds of MFP payments from the federal government, $121,253,705 has been pumped into the local ag community.

A Freedom of Information Act request to the U.S. Department of Agriculture showed the total payments to farmers in Henry, Mercer and Rock Island counties in Illinois, and Scott and Muscatine counties in Iowa.

“While farmers have been grateful for those MFP payments, they’re ready to get back to trading and seeing those exports drive up, hopefully, prices,” said DeAnne Bloomberg, director of issues management with the Illinois Farm Bureau.

“There’s 1.1 billion people there in India, so I think if we can get stuff going on trade with India, it would be really huge,” he said.

It's unlikely a third MFP will come from U.S. President Donald Trump's administration after two trade deals were signed in January, so farmers are holding out hope for a better 2020 than years past.

“Agriculture, whether you live in Illinois or Iowa, is the number one industry," Verbeck said. "Maybe you’re in Davenport and you see Arconic, or you are in the Quad-Cities and you see John Deere…it’s ag. It’s throughout (both) states.”

Part of that investment is new trade deals. While the United States-Mexico-Canada Agreement and the U.S.-China deal garnered more headlines, and deservedly so, U.S. officials also struck a new trade deal with Japan about six months ago.

But Covid-19, or novel coronavirus, shut down business in China for weeks, slowing progress on trade between the U.S. and China, and putting into question when promised Chinese purchases of American-made goods will begin. Meanwhile, corn and soybean prices didn’t improve much after the trade deals.

That puts added emphasis on needing more markets where American-grown crops can be sold.

Bloomberg said recent trade deals can create momentum for more agreements, such as with the United Kingdom, European Union and even sub-Saharan Africa. The Illinois ag leadership program has a group of young leaders in Africa now as part of a two-year international tour.

According to a Feb. 3 USDA news release, MFP payments were “aimed at assisting farmers suffering from damage due to unjustified trade retaliation by foreign nations.”

Without a main buyer of American farmers’ goods, the federal government allocated funds for the unsold goods. President Trump’s administration created MFP in 2018 after Trump imposed tariffs on China, which, in turn, retaliated by purchasing fewer American crops.

As the trade war dragged on in 2019, a second round of MFP payments were awarded. But the MFP itself has undergone criticism, such as when the Environmental Working Group found in a July 2019 study that more than half of the first two payments went to bigger, wealthier farms.

On a sunny but chilly day in early March, Verbeck made fixes to the engine of his 1970s-era John Deere tractor. What began as a radiator leak devolved into other repairs as he inspected the engine.

Verbeck balances maintenance with adding steel bars to the interior cab of his 2012 John Deere combine. Those bars must hold the weight of monitors as Verbeck continues to invest in Deere’s precision ag offerings — technology that allows operators to more precisely maneuver in fields.

For farmers, being able to turn on auto-steer in a field means straighter lines as the machines go up and down rows. That narrows the potential for leaving revenue on the table when harvest season comes around. The same goes for fertilizer application.

There is a push for a weed sprayer that, with the use of cameras, can distinguish between a weed and a planted crop, and will spray only the weeds, said Dr. Matt Darr, Iowa State University's director of BioCentury Research Farm and a professor.

At a recent agriculture outlook seminar in Riverside, he said there is “legitimately an 80% opportunity for a reduction in chemical use."

For Verbeck, he can afford to add pieces one at a time, but not all at once. And he isn’t alone; Deere is investing more of its capital outlay into precision ag as well as in the parts and retro-fitting market.

The Moline-based manufacturer is making business moves to become the Apple of the ag industry, as evidenced by its purchase of Blue River Technologies in 2019. Farmers pay a yearly fee for the GPS device that hooks up to each vehicle; farmers also pay a yearly fee to access their data on Deere’s servers.

Verbeck sat in his cab deciding where best to mount new monitors while also ensuring he still has a good view while operating in the field.

“Sometimes it can be quite a challenge because (the machines have) to be able to communicate, and you can’t mix and match companies,” he said, similar to tech products made by Apple and Samsung.

Citing a recent survey of Illinois Farm Bureau members, Bloomberg said there is optimism among Illinois farmers, but big purchases, such as new machinery, might not be in the near future.

But those purchases, and a strong embrace of precision ag, may come from younger farmers, who can experience a shorter window to establishing a return on investment.

“I can see the investments that will come down the pike. Everyone is taking a step back right now and looking at all purchases,” Bloomberg said.

There’s a strong belief locally that soybean and corn market prices will improve in the coming year. Throw in a relatively minor winter that may be nearing its end, and the eternal optimist farmer returns.

Verbeck was part of a coalition that went to the White House last year to advocate for an emergency disaster declaration after massive flooding damage in the Quad-City area last spring. That was in the days before the Oct. 15, 2019, deadline of more tariffs between the U.S. and China.

Verbeck was among the most vocal, explaining to politicians and a Trump administration official what trade wars mean for farmers in the Midwest. He recalls giving a mailer to a Trump staffer that outlined how prices would increase on farmer inputs, such as fertilizer and herbicides, because they include ingredients made in China.

Days later, the Oct. 15 deadline date was extended. Trade negotiations between the countries ramped up, and another tariff deadline was avoided before the two countries ultimately signed the Phase One agreement.

Verbeck was emotional recalling the story, which he said he likes to tell people. But that's not so he can brag — quite the opposite.

“This is what the Farm Bureau does. Dennis Verbeck cannot get a seat across from a president’s staff member. Illinois Farm Bureau can,” he said. "It's not just about corn and soybeans … it's about community."

COVID-19 pandemic: What are businesses doing to cope?

Deere & Company is restricting domestic travel to vehicles for its employees as COVID-19 continues to spread throughout the United States.

Retail and grocery stores will likely restore their supply chains faster than manufacturers. Toilet paper and hand sanitizers, among others, that have seen a surge in demand will likely return to normal inventory levels at some point.

But COVID-19 poses new challenges to an ag industry already pummeled by bad weather and trade.

Deere & Co. rolled out another round of buyouts for U.S. salaried employees Thursday.

As an international trade war drags on and farmers continue to grapple with roller-coaster weather, harvest season has become a "race against time."

Feds: Truck drivers can stay on the road longer to supply propane

Federal action has been taken to allow commercial truck drivers to drive longer periods of time to address propane needs for area users and farmers seeking to dry their crop.

CAMBRIDGE — This year's historic floods have turned northern Henry County into a "virtual agricultural wasteland," and farmers may not recover from the devastation, county officials are being told.

Dennis Verbeck, president of Henry County Farm Bureau, works on hanging devices inside the cab of his tractor Thursday, March 5, 2020, in Sheffield.

Dennis Verbeck, president of Henry County Farm Bureau, shows off planter oats and tillage radishes on a 75-acre section of land south of Annawan that could not be planted last year Thursday, March 5, 2020. Those two crops, of what’s known as cover crops, helped avoid soil erosion and brought nutrients closer to the surface for where Verbeck plans to plant soybeans this year.

Dennis Verbeck, president of Henry County Farm Bureau, climbs out of the cab of his tractor Thursday, March 5, 2020, in Sheffield.

Dennis Verbeck’s, president of Henry County Farm Bureau, planter oats and tillage radishes on a 75-acre section of land south of Annawan that could not be planted last year Thursday, March 5, 2020. Those two crops, of what’s known as cover crops, helped avoid soil erosion and brought nutrients closer to the surface for where Verbeck plans to plant soybeans this year.