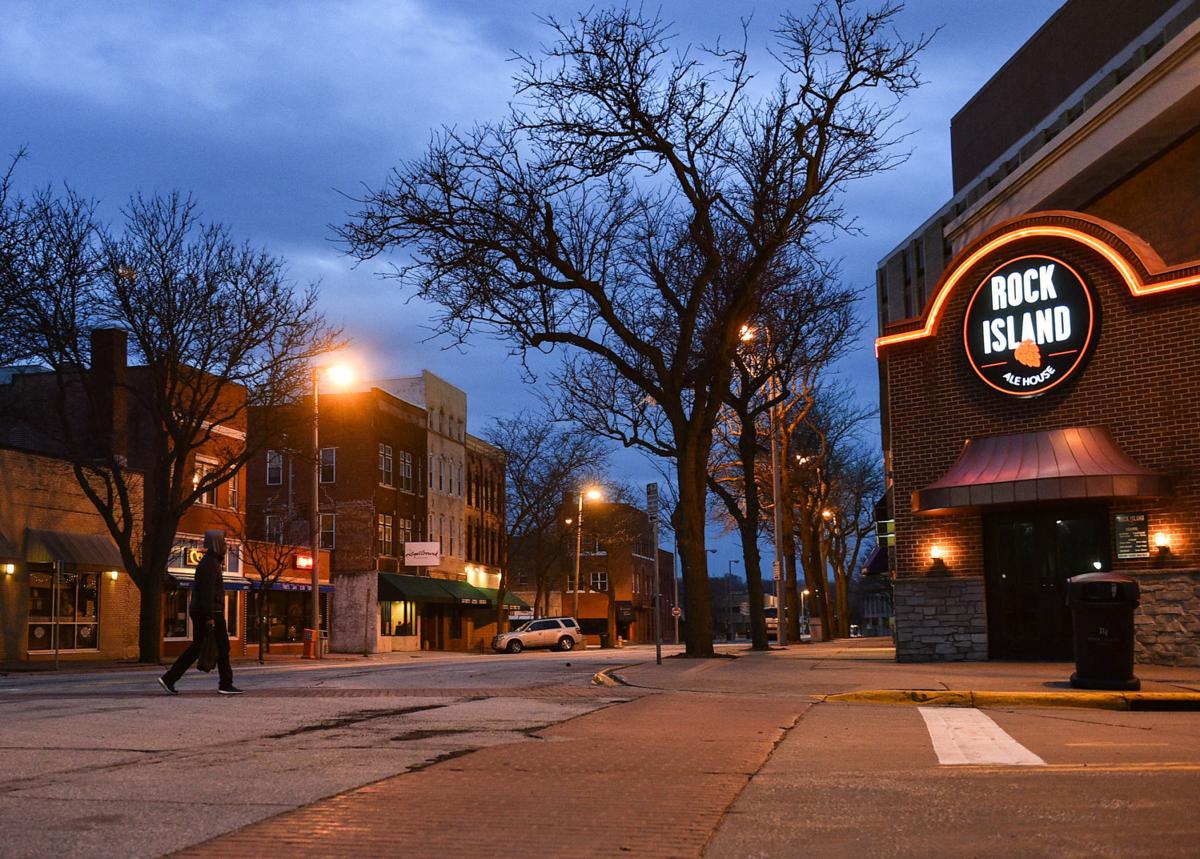 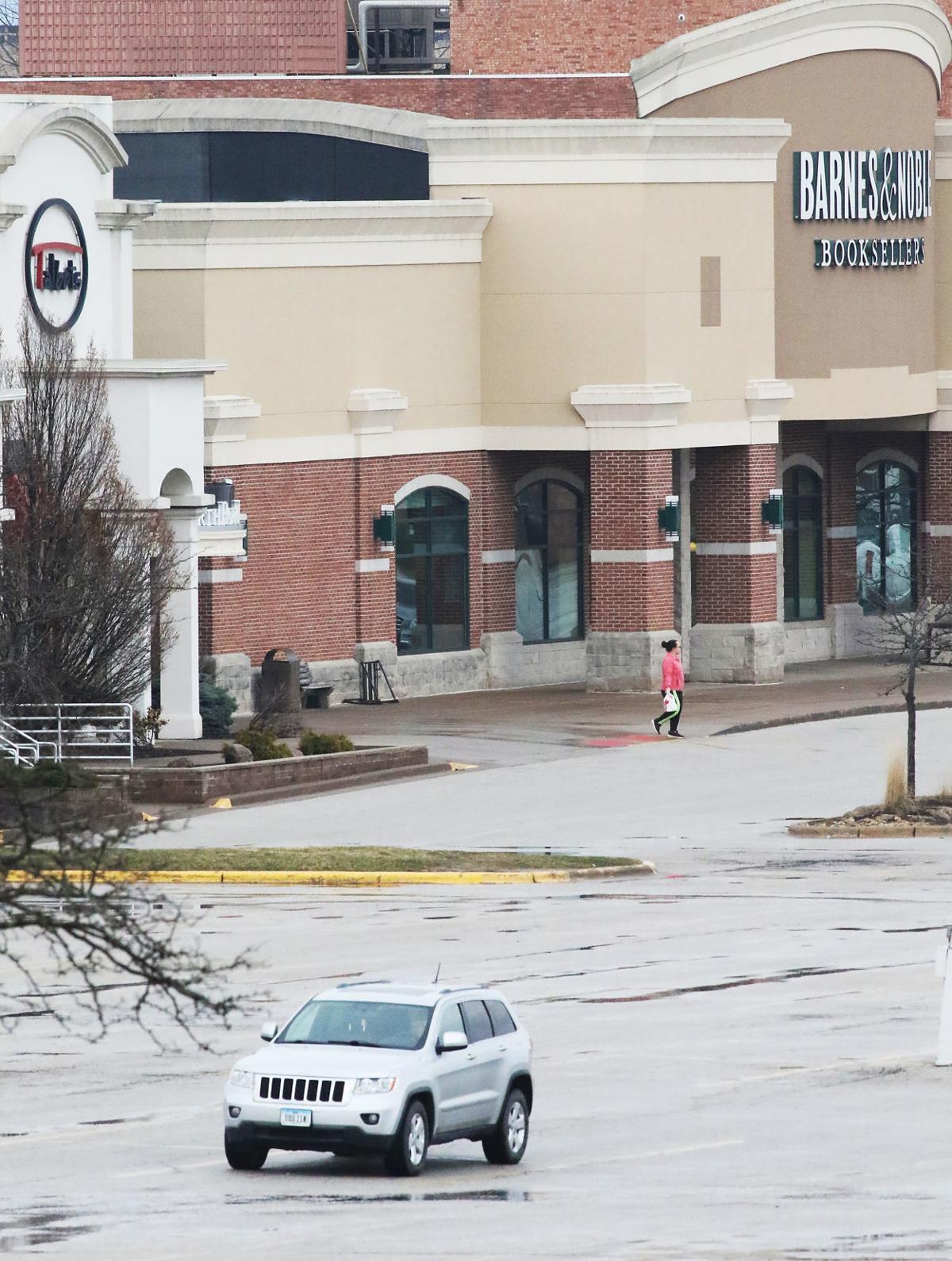 A lone customer walks across the parking lot at the NorthPark Mall in Davenport, Thursday.

DES MOINES — Waiters, waitresses, bartenders, hotel employees and other workers in accommodation and food services industries who were idled because of the COVID-19 outbreak are filing jobless benefits claims in droves, state officials from Illinois and Iowa said Thursday.

The total number of new claims in Illinois last week was 114,663, a 950% jump over the previous week and a 1,338% increase over the same week last year when there were only 7,933 new unemployment claims.

The surge in weekly applications was a stunning reflection of the damage the viral outbreak is inflicting on the economy. Filings for unemployment aid generally reflect the pace of layoffs.

Dan Black, who teaches economics at the University of Chicago, also called the current economic condition “unprecedented” and said the ripple effects may be felt for a long time to come.

“I've seen people who are panicking and saying, ‘oh, is it going to be a recession? This is going to be the next depression.’ I've seen other people who kind of poopoo the idea, but the truth is, we don't know because we've never seen anything like this,” he said.

In an attempt to lessen the impact of the virus on the economy, the U.S. Senate late Wednesday night passed a $2 trillion recovery package that would deliver direct financial aid to nearly all citizens as well as financial help for businesses and state and local governments. The House is expected to vote on that package Friday.

Swenson said the federal stimulus package, with a $1,200 check for each person and an expansion of unemployment benefits, were needed steps.

Claimants can expect to receive payment within seven to 10 days after the date the claim is filed, according to an IWD spokeswoman. The maximum number of weeks a claimant is eligible is 26 weeks, the agency said. But, if a claimant is working part-time and reporting wages, the number of weeks is extended because only a partial payment is received each week.

Last week IWD Director Beth Townsend called the volume of Iowans filing for unemployment benefits “staggering” and approaching in one week what normally would be a month’s worth of claims.

IWD employees were able to process all of the initial unemployment insurance claims received in the latest weekly time frame despite the significant surge in claims, but Gov. Kim Reynolds on Wednesday apologized for delays and said the agency had dedicated 250 staff members to processing claim requests.

Meanwhile, many have reported issues with Illinois’ system for filing unemployment claims and Gov. JB Pritzker has noted the Illinois Department of Innovation and Technology is working to make a new platform for such claims.

He said 17,000 people had filed claims successfully on Thursday alone as of 2 p.m. as the state tries to keep up with the unprecedented filings.

“Which is an amazing number considering that you know they're literally building this airplane while it's trying to take off,” Pritzker said at a daily COVID-19 news briefing in Chicago. “…We're going to get this right, and we're going to make sure that everybody has the opportunity to file for unemployment claims and we have sped up the process for people to actually receive those claims as well.”

Pritzker severely restricted social and economic activity Sunday, March 15, when he ordered all public and private K-12 schools to close. Then on Monday, March 16, he ordered bars and restaurants to close for consumption on their premises and banned public gatherings of 50 or more people.

On March 17, Reynolds declared a statewide public health disaster emergency in Iowa that included limiting gatherings to 10 people and closing bars, restaurants, casinos and a number of other businesses as part of a widespread economic shutdown caused by the state’s coronavirus outbreak.

Reynolds has stopped short of of instituting a shelter in place order that would halt all but essential business such as the order Pritzker issued on on Friday, March 20. Iowa's restrictions will run through at least the end of March, while Illinois' will continue through at least April 7.

Those actions were aimed at limiting the spread of COVID-19 which, as of Thursday, had resulted in 2,538 confirmed cases of the disease in 37 counties in Illinois and had caused 26 deaths. In Iowa, there are 145 known confirmed cases on one death.

Looking forward, Swenson declined to give specific number predictions. He said recessions normally happens with unemployment growing, not spiking like what is currently happening and what it likely will do again next week.

But the reduction could have less long-term impact depending on the recovery.

“I’m sorry, but we don’t know. We’re so early in this, we don’t know. And people who I believe act like they know don’t know; I think they’re just offering up some good guesses,” he said.

The Iowa-based economist again declined to give any specific numbers of unemployment he thinks may be on the horizon. That was done because he is self-advised to be careful as no one is sure what the next phase of the COVID-19 pandemic will be as it continues to spread across the U.S. and other parts of the world.

“We are slaves to this virus. The economy is a slave to this virus right now and to pretend otherwise is foolish,” Swenson said.

Jerry Nowicki of Capitol News Illinois contributed to this report.

Pay raises and more benefits are coming for Hy-Vee, Fareway grocery store workers and Kraft Heinz employees in the Quad-Cities amid the COVID-…

The Quad-Cities will likely suffer an economic impact as COVID-19 continues to spread.

Market uncertainty: Companies could see some relief after U.S.-China phase one agreement, but plenty of questions remain

Two years into an international trade war, the manufacturing segment of the U.S. economy remains uncertain.

A lone customer walks across the parking lot at the NorthPark Mall in Davenport, Thursday.