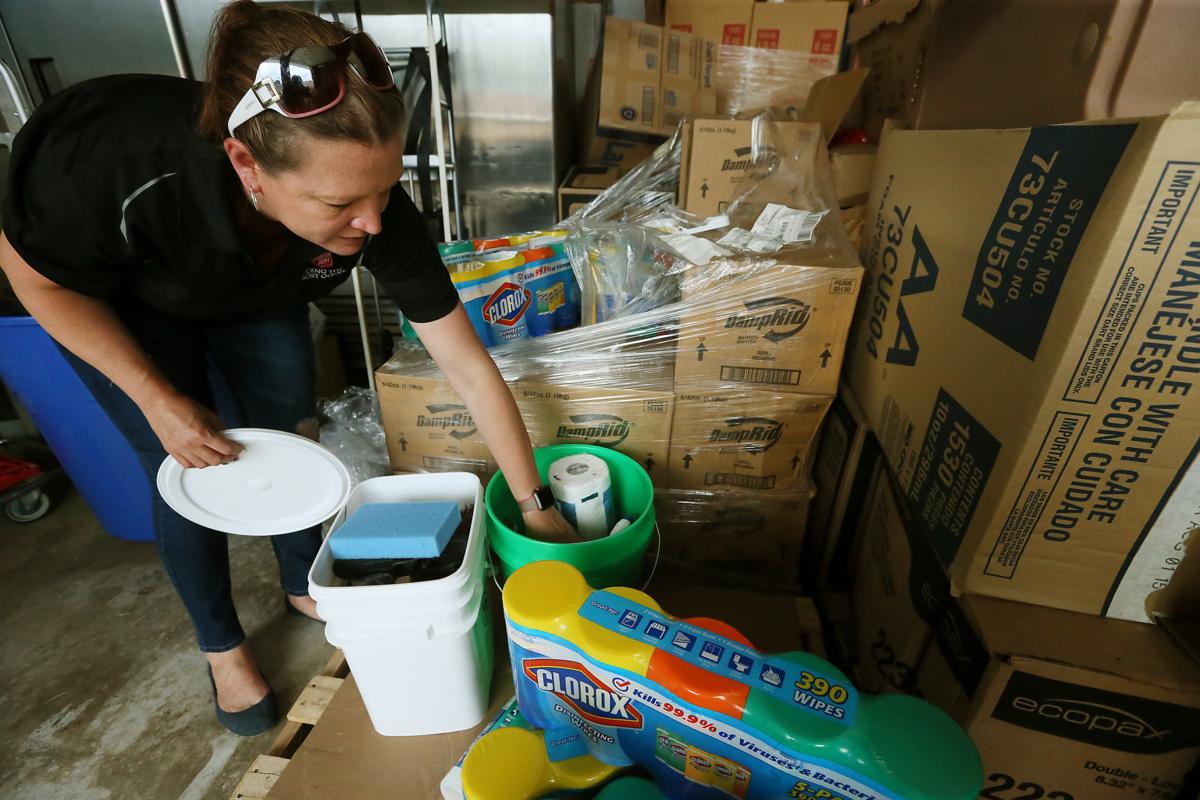 Salvation Army Administrative Assistant Megan Pieper talks about the various items ranging from cleaning supplies to water, available for local residents for use for flood relief at its Central Park Avenue location in Davenport. 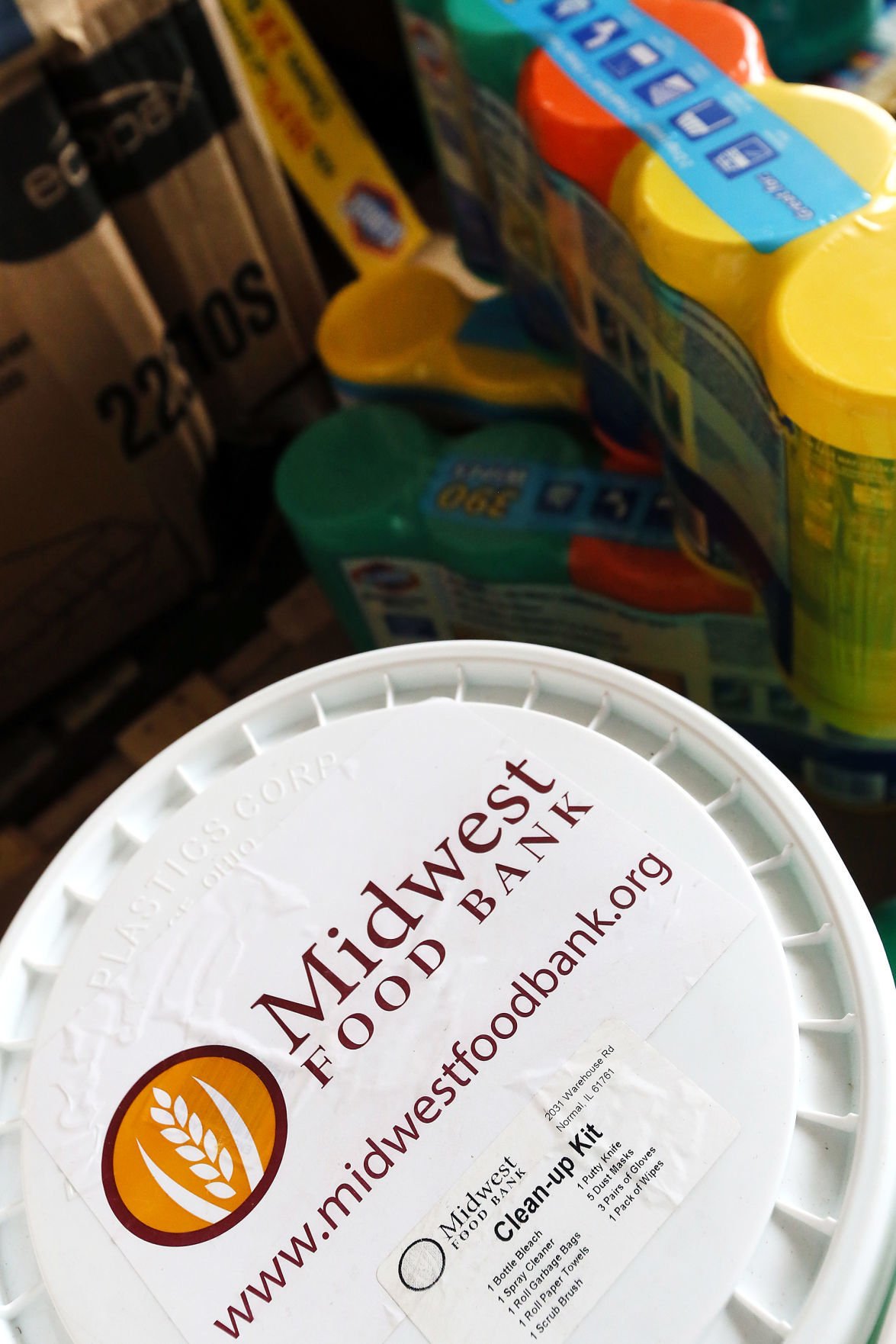 A cleaning bucket filled with supplies is available at the Salvation Army Central Park Avenue location in Davenport. 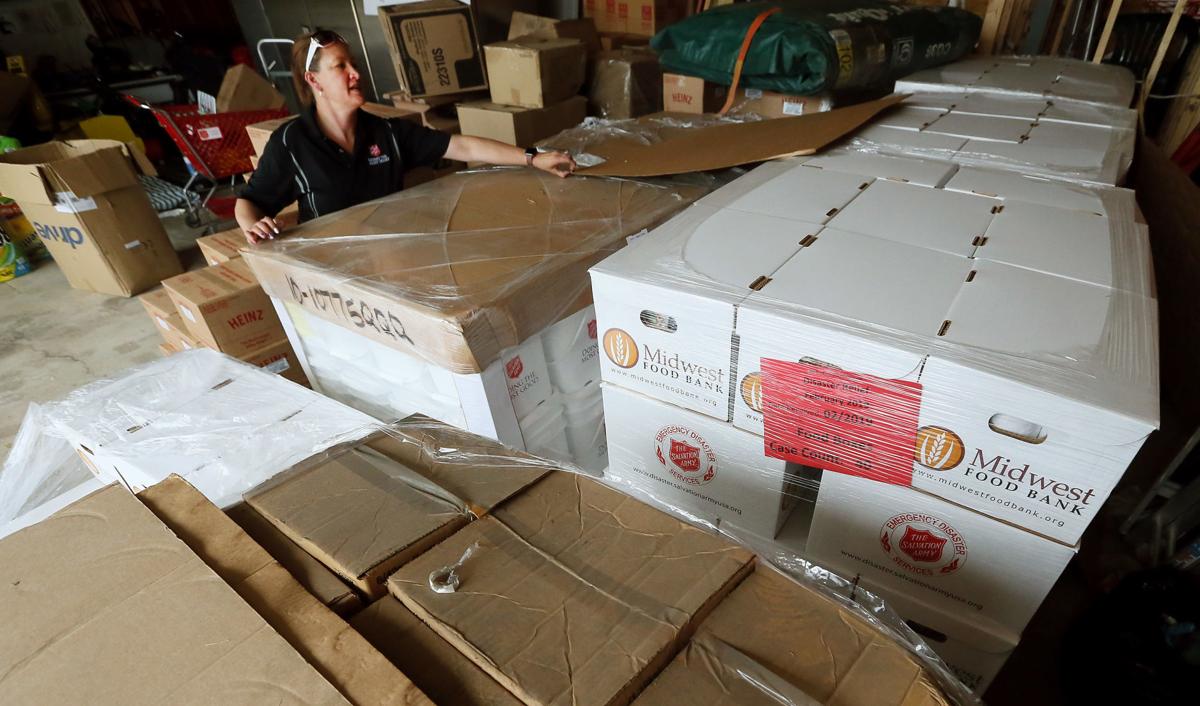 Salvation Army Administrative Assistant Megan Pieper talks about the various items ranging from cleaning supplies to water available for local residents for use for flood relief at their Central Park Avenue location in Davenport on Friday.

Amid months of record-breaking flooding and seemingly constant rainfall, Quad-City business owners and residents have found a bright spot.

Since April 30 — the day the temporary flood wall breached, closing dozens of businesses and devastating downtown Davenport — the Quad-Cities has seen a glimmer of light through the outpouring of community support.

Corporations have written large checks, held fundraisers and launched flood relief funds. Residents have dropped off supplies at the Salvation Army and American Red Cross. Businesses have taken in displaced employees and donated sales to flooded stores and restaurants.

To date, the Quad-Cities has raised around $1 million to support flood relief efforts. That includes donations raised by major organizations, flood relief funds and individual fundraisers.

"Some of the biggest checks that have been written came from business owners here (in downtown Davenport), wanting to give to others," said Kyle Carter, executive director of the Downtown Davenport Partnership. "So that's been great. And just the community-wide support has been overwhelmingly and deeply appreciated."

The downtown partnership and Quad-Cities Chamber of Commerce have raised the biggest pot of money so far, more than $397,800, to be distributed to businesses affected by the flooding.

A couple of hours before the application deadline Wednesday, Carter said around 55 businesses and 25 property owners had applied to receive funds.

Out of the nearly $400,000, more than $117,000 was raised by donations to the Chamber's nonprofit Grow Quad-Cities and the Flood Fest fundraiser. The downtown partnership's board of directors approved around $230,000 to be distributed to property and business owners. Another $50,000 was donated by the Quad-Cities Community Foundation, with $50,000 more coming from the Regional Development Authority.

Carter said the downtown partnership is now working to determine how much money can be allotted to each business. He hopes to distribute the funds by early August.

"It's a small portion of funding, but it's still really significant because there are so few other resources for direct financial assistance for businesses," he said. "People are clearly very grateful, and we're happy and proud to be one of the few organizations able to provide businesses with direct funding."

Nonprofit organizations throughout the Quad-Cities also have been collecting thousands of dollars to support flood relief services and individuals affected by the historic flood.

Bill Horrell, development director for the Salvation Army in the Quad-Cities, said the organization has raised around $16,000 in monetary donations, as well as roughly $60,000 in material donations.

Since May 6, the Salvation Army has distributed more than 11,000 items, including food boxes, cleanup kits, hygiene products, water and other supplies, he said. The monetary donations will go toward the Salvation Army's services and relief efforts.

"It's been amazing," Horrell said. "People have shown up with donations and then asked what else do we need. We had several people come back multiple times to donate items. It's just great to see the community come together and help people in need."

Through its Quad-Cities Disaster Recovery Fund, the Quad-Cities Community Foundation has raised roughly $150,000, according to a news release. That includes the $50,000 provided to the Chamber. And, a $25,000 grant is being distributed to individuals affected by flooding.

In addition, United Way of the Quad-Cities is distributing funding from the Emergency Food and Shelter Program, which is federally funded by the Federal Emergency Management Agency. The money will be distributed to qualifying nonprofit and government organizations. In Scott County, more than $61,400 is available through the state, and in Rock Island County, more than $79,700 is available.

Several other groups also have been raising funds and providing grants to individuals and businesses, in the Quad-Cities and throughout Iowa. The Iowa Association of Realtors, for example, is providing $275,000 in grants to help affected state residents.

Companies step up to help

While the American Red Cross has yet to release an exact donation total, major Quad-City employers have been writing checks for the organization.

"The duration of the flooding has taken a huge emotional and financial toll on our community and those responding, and I am so proud of the way our community pulls together to help each other in times like this," Burnett said. "It makes us appreciate the Quad-Cities."

Along with some other charitable organizations, the Genesis Health Services Foundation launched its own flood relief fund. Spokeswoman Linda Barlow said the foundation estimates it will have raised $75,000 by the time it plans to distribute the money after July 19. She said the money will be donated to local organizations providing flood relief.

Small businesses support each other

Carter said he's been overwhelmed by the number of small businesses that have sacrificed daily sales to support their flooded neighbors.

Despite that, Bush spent each Monday at Armored Gardens, raising money for flooded businesses. Each Monday, the bar and restaurant donated 50% of bar sales and 100% of bar tips to displaced businesses and employees.

"Especially with trying to revitalize the downtown, we can't survive without each other," Bush said. "We're ensuring everyone does come back and comes back in a quick fashion. We figure if we're not all in this together, then we're in trouble. It's been great getting closer to other business owners. That's been one silver lining."

The roughly $1 million in funds and supplies tallied only represent a portion of the donations that are pouring into the Quad-Cities to support flood relief efforts. It also does not account for several privately-held fundraisers, plus significant material donations, including meals provided to affected families, donated by groups such as Smithfield Foods and Tyson Foods.

It also doesn't account for many of the businesses across the Quad-Cities offering shifts to displaced employees, hosting tap takeovers for displaced breweries, operating pop-up shops for closed retailers and providing other support.

Cheers to the Quad-Citians who have combined to donate more than $1 million to flood relief.

DAVENPORT — If you like beer and want to support some important local causes, the 20th annual Brew Ha Ha is the place to be on Sept. 21 at LeC…

Quad-City residents will wake up to sweeping storm damage across the region after a high-powered rainstorm struck suddenly Sunday evening.

Salvation Army Administrative Assistant Megan Pieper talks about the various items ranging from cleaning supplies to water, available for local residents for use for flood relief at its Central Park Avenue location in Davenport.

A cleaning bucket filled with supplies is available at the Salvation Army Central Park Avenue location in Davenport.

Salvation Army Administrative Assistant Megan Pieper talks about the various items ranging from cleaning supplies to water available for local residents for use for flood relief at their Central Park Avenue location in Davenport on Friday.