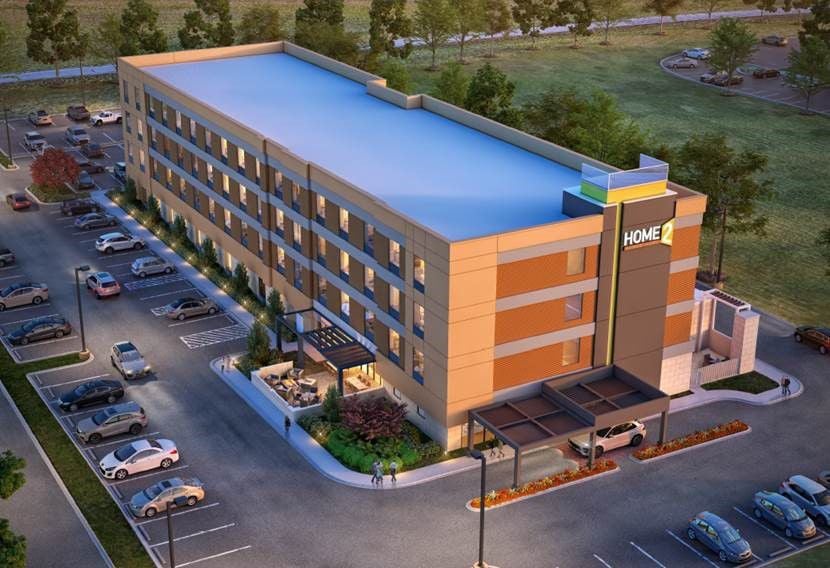 Frontier Hospitality Group has announced plans to develop and operate a $14 million 107-room Home2Suites by Hilton Hotel at the former Jumer's Castle Lodge site at Interstate 74 and Spruce Hills Drive in Bettendorf.

BETTENDORF — Frontier Hospitality Group has announced plans to develop and operate a new Home2Suites by Hilton Hotel at the former Jumer’s Castle Lodge site in Bettendorf.

The 107-room Hilton branded, extended-stay hotel is planned at Interstate 74 and Spruce Hills Drive. Davenport-based Russell is the contractor.

The $14 million project also will feature a pool, outdoor patios, a fitness center and a 4,200-square-foot community space called the “Oasis” with communal and individual work zones.

Huber said construction will begin in July with the hotel opening next summer. He expects 100 construction jobs and more than 30 permanent jobs will be created.

This is Frontier Hospital Group’s first project with Hilton.

Bart Baker, co-owner of Frontier Hospitality Group, said the firm is in a growth mode.

“Jim Russell and Russell Construction have been great partners with us on multiple projects,” said Huber. “This opportunity has a lot of what we look for in a project — a strong brand, in a visible and proven location, with great partners in the City of Bettendorf, Russell and Hilton International.”

The proposed hotel is the second project Frontier recently announced in Bettendorf. The Cambria Hotel Bettendorf is being built near the new TBK Bank Sports Complex. The group also developed the Holiday Inn Express in Moline and Davenport’s Best Western Plus Steeplegate Inn, plus hotels in Peoria and Dubuque.

Watch now: Ford to invest $11.4 billion in Tennessee and Kentucky

Retiring solely on Social Security could mean making a lot of sacrifices.

'If you don't have a cook, you can't open as a restaurant': Labor shortage continues to impact Quad-Cities businesses

V.I.P.’s Corner Bar & Grill is just one of at least three businesses along 5th Avenue in Moline — and one of several in the Quad-Cities — that are unable to hire and retain enough employees to maintain a full staff.

As manufacturers automate, employees must adapt or move on

Here's what you should know if you're planning on purchasing an electric vehicle in the near future. Also, check out more of the week's best money tips from experts.

China’s Evergrande Real Estate Group is probably one of the largest companies you’ve never heard of. Headquartered in Shenzhen, China, the company is one of the world’s largest property developers. With prior year revenues of $73.5 billion, it sits at No. 122 in Fortune’s Global 500 of the world’s largest companies. It employs a massive workforce — 123,276 as of Aug. 2 — and boasts it indirectly creates more than 3.8 million jobs every year.

Claiming Social Security at 62? You May Need to Rethink That

Over the past 10 years, Rock Valley Physical Therapy has increased from 21 locations to 62 by the end of this year, including seven new locations in Omaha.

Shive-Hattery will have a ribbon-cutting ceremony and open house for its new Quad Cities Design Office from 3:30 to 6 p.m. Thursday, Sept. 23.

Quad-Cities unemployment rate down to 5.1%

The Quad-Cities unemployment rate is down to 5.1% for the month of August.

Frontier Hospitality Group has announced plans to develop and operate a $14 million 107-room Home2Suites by Hilton Hotel at the former Jumer's Castle Lodge site at Interstate 74 and Spruce Hills Drive in Bettendorf.