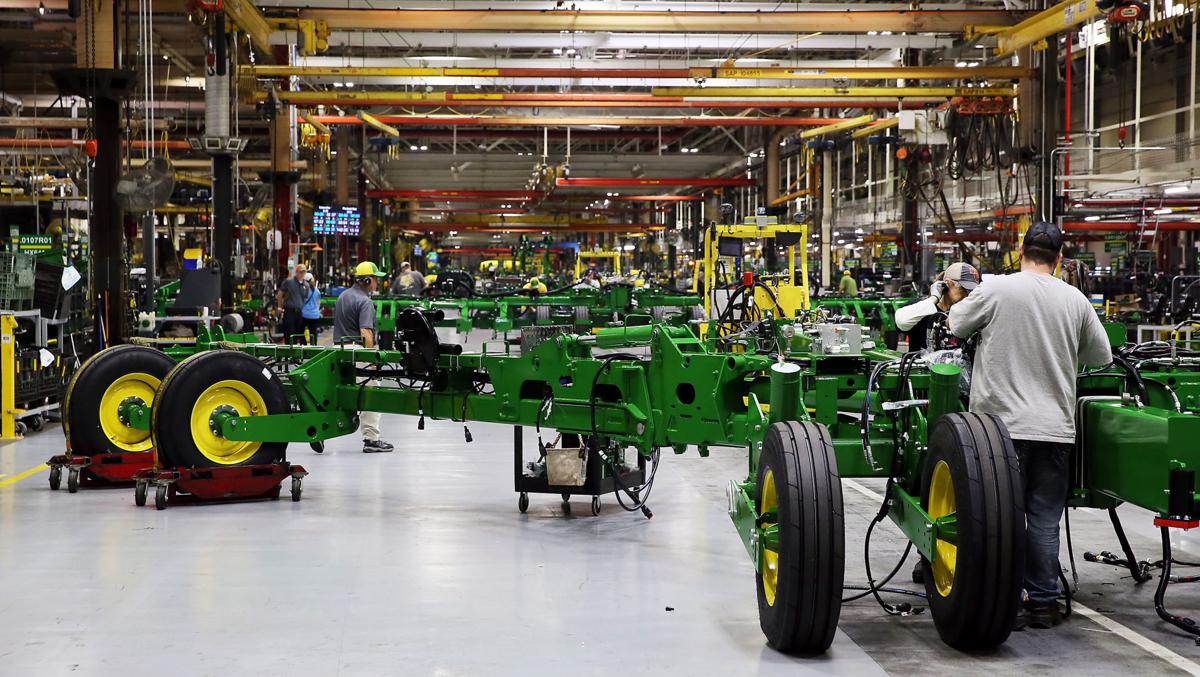 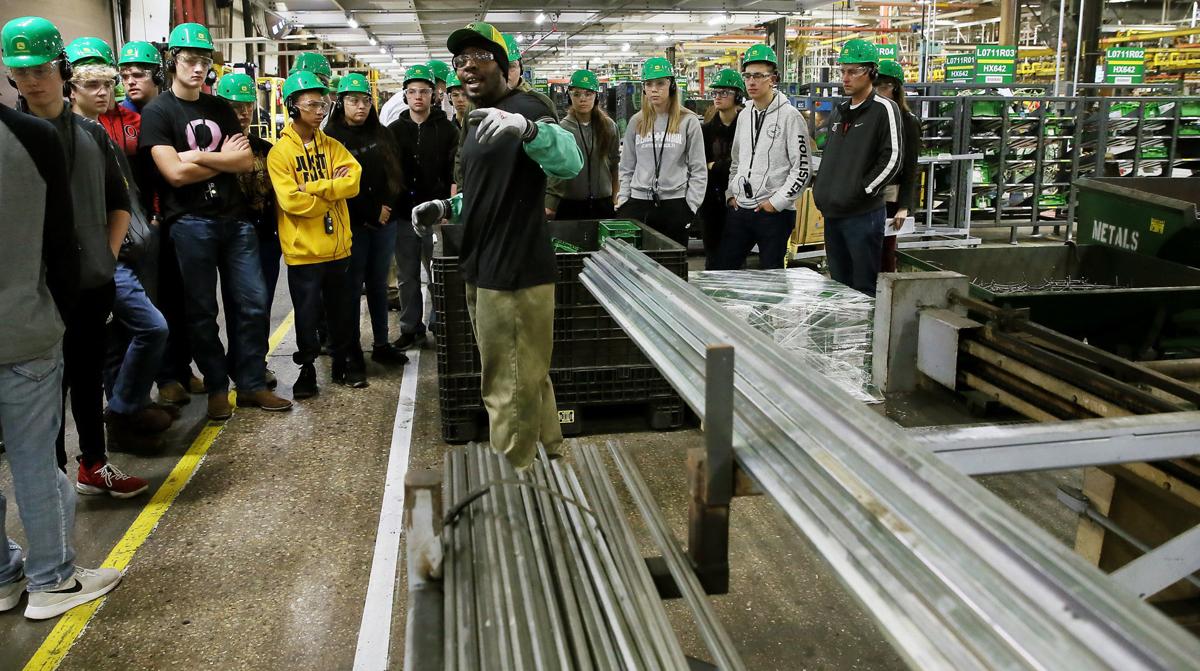 Machinist Ashley Harris explains his job in the assembly line at the John Deere Seeding Group plant in Moline Oct. 17, 2018.

A farmer dumps his load of corn into a semi trailer in 2018 while harvesting in rural northwest Scott County. 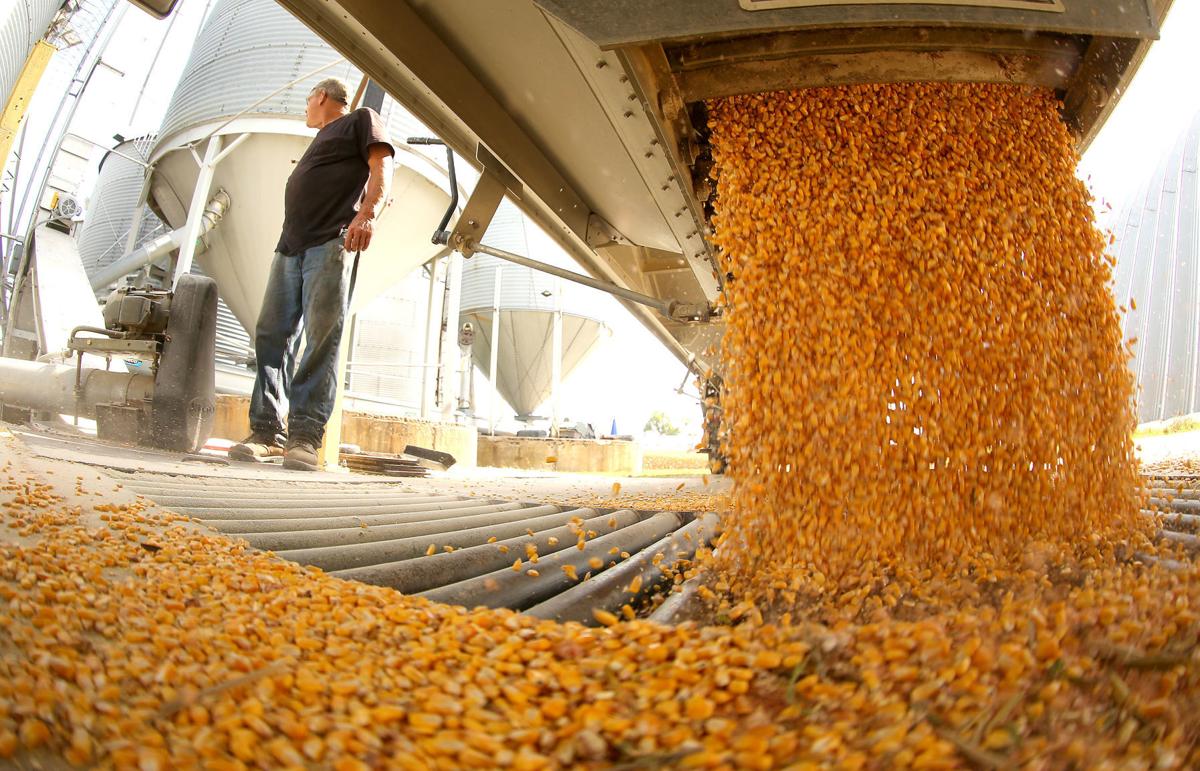 Corn from a hopper truck pours into a collection pit Sept. 25, 2018, as Dean Engelbrecht looks over at the corn dryer operating on the Engelbrecht Bros. farm in northwest Scott County. 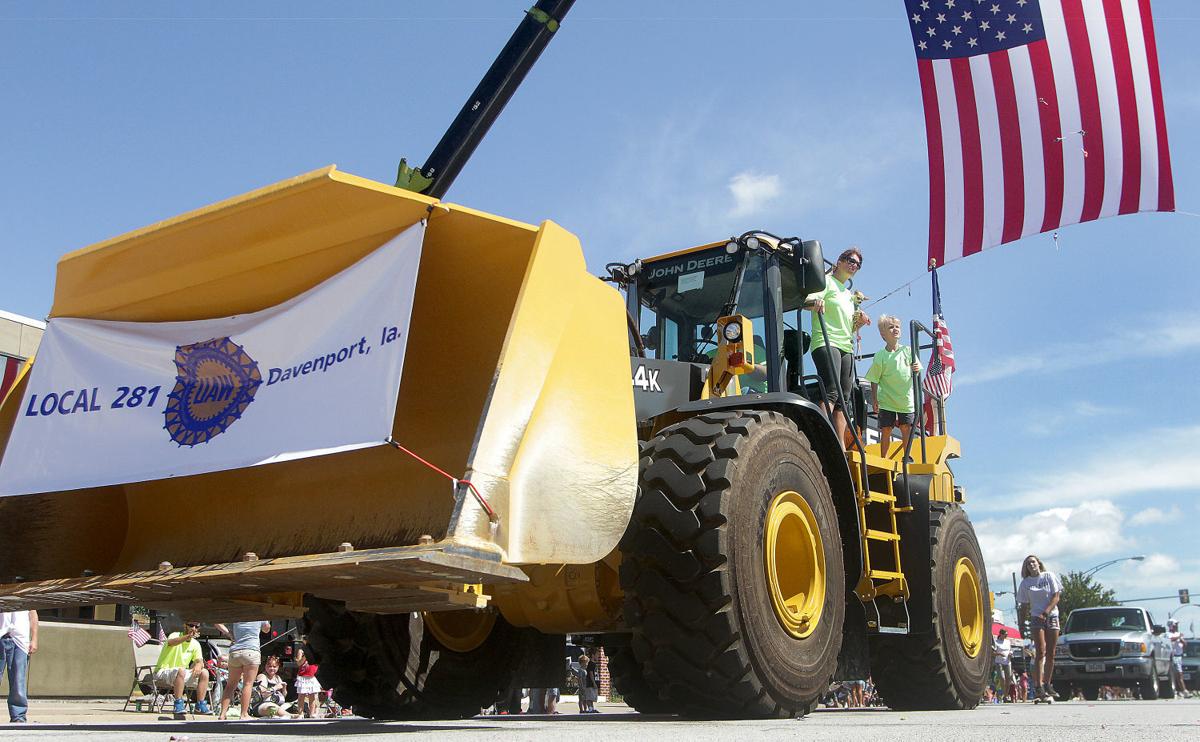 Two years into an international trade war, the manufacturing segment of the U.S. economy remains uncertain.

Officials with the United States and China signed off on the first phase of a new trade deal between the international trading partners in recent days. That was followed by the U.S. Senate passing the new North American trade agreement, commonly referred to as USMCA for the U.S., Mexico and Canada.

But the focus remains on ongoing dialogue between the U.S. and China, and a phase two deal may not come until 2021. In the meantime, the unsteady market could take even longer to correct.

“It leaves a whole lot of tariffs in place, so no matter what there are going to be substantial tariff-based price impacts on importers, whether they are consumers, manufacturers or anybody who is using those products,” said Dave Swenson, an economist and professor at Iowa State University. "As it stands right now, simply with regard to manufacturing, we really don’t know.

"Phase one sounds promising, but it’s more in terms of intention, as opposed to commitment, and we still have those tariffs in place. So is this going to make any kind of difference in regards to U.S. manufacturing? My short answer is it’s doubtful.”

That uncertainty will cause many companies, such as Moline-based manufacturing giant Deere & Co., to look at diversifying their supply chain.

“I think it creates a lot of issues for longer-term planning. Even if we did get some sort of deal, the genie is already out of the bottle,” said Sarah House, senior economist with Wells Fargo. “Companies are probably going to be a little bit more cautious in putting all of their eggs in one basket, whether it’s here or China or elsewhere.”

In addition to possible changes in suppliers, trade disruption has affected the amount of investment by manufacturers.

“There is a lot of investment in the United States, as we read about it, that has simply been put on hold," Swenson said. "Right now, manufacturing nationwide is very pessimistic if we just go by supply managers’ surveys. If it’s not actually in manufacturing recession right now, it is close to it."

David Thompson, president of the United Auto Workers Local 865 in East Moline, said he began to view the trade war directly impacting Deere workers last spring when some farmers across the country elected not to plant at all in 2019.

“Its multiple factors: It’s the weather, it’s the African swine flu, commodity prices. There’s a whole multitude that affected markets, but for me, personally, it was when they had farmers that were opting not to plant,” Thompson said.

Layoffs occurred at Davenport Works and Harvester Works in East Moline in October, followed by another round for Davenport in December. Thompson said he believes Deere waited to make any changes to see what the market would be like.

“Deere did the right thing by those folks letting them get their year in so then they would be able to receive benefits such as transitional assistance benefits, what we call sub pay, which is supplemental to unemployment. They’ve got insurance for six months from their layoff date,” Thompson said.

“Deere did right by those folks, but make no mistake about it — it was not just out of the kindness of their heart. They recognize it is hard to hire solid employees. It’s hard to retain good people, and they wanted the ability, if things pick back up, to recall those people and have them come back to work.”

And while the overall economy is doing well, Thompson said that isn’t true for manufacturing in the ag sector.

“Unfortunately the production worker, the blue-collar worker, the UAW members, take an impact from it. And it’s no big secret that Deere has offered buyouts for its salaried folks. That’s a pretty strong indicator that they need to tighten the belt.

“It’s going to have a definitive effect on the rest of the economy in the Quad-Cities.”

Phillip Braun, an economist and professor at Northwestern University, said tariffs were used in the 1930s but haven’t been used much over recent years or decades before U.S. President Donald Trump.

“The bottom line is that tariffs hurt the U.S. economy, and that’s what’s happening right now. What we see in the manufacturing sector should start to affect the overall economy (in 2020),” he said.

“Companies are going to have to become less dependent on China for production base as well as a place to sell their goods. That’s the long-term effect of what’s going to happen, so we already have seen some companies moving their manufacturing capabilities into areas like Vietnam, which have lower wage rates and are unaffected by tariffs."

As far as the new trade deal developments, the U.S.-China phase one and USMCA, Braun called the phase one deal “OK” but pointed to tariffs continuing. On USMCA, he said much of NAFTA — the North American Free Trade Agreement, which was replaced by USMCA — remains intact.

USMCA is “really a marketing play by Trump to show his ability to negotiate when there’s not much in the agreement,” Braun said.

Scott Pope, an analyst who covers Deere for Morningstar, a financial services firm based in Chicago, said pundits have indicated the $40 to $50 billion that China will buy in ag goods from the U.S. will likely include more than corn and soybeans, such as pork or ethanol.

“About 45% of the corn in the United States goes to blending ethanol and motoring fuels. As cars become more fuel-efficient in the United States, that’s going to decline," Pope said. That opens an opportunity for the U.S. to bolster ethanol exports to China, which would benefit Deere as well as American farmers.

Deere CEO John May and CFO Ryan Campbell laid out some of Deere’s 2020 plans at a consumer trade show in recent weeks. There, May discussed a shift in the age of farm equipment.

“Some of those indicators would say that if maybe some of the other variables that are influencing the uncertainty right now in agriculture were to change, the demand is there. We’re seeing some positive signs on our early order programs, particularly in combines,” May said.

“… We need to see what’s going to happen with trade and see if it’s more of a positive free trade type outcome for our customers … and then standing right behind that is a lot of pent-up demand. The equipment is getting older.”

Meanwhile, Deere continues to invent in its precision ag services — advanced farming techniques that use technology to more precisely operate in fields.

“In terms of aging versus technology, I think the point (May) was trying to make is Deere has historically been considered the leader in precision ag technology, but I think more importantly they seem to be more open to partnering with Silicon Valley technology firms, such as purchasing Blue River Technology,” Pope said.

As Deere has made advances in precision ag, the Moline-based company has “taken more of an Apple model where everything is sort of branded by Deere, where other companies have been more open to using third-party technology,” Pope said.

The goal of Deere, as well as other manufacturers, is “to get more of the aftermarket part sales. If you look at farmers in general, at least in the developed areas, they are typically very hands-on people. They have, in some cases, welders and other pieces of equipment on the farms to actually repair equipment. The basic premise is if more of those repairs go through dealers as opposed to having farmers fix them on their own then, that after-market parts revenue will be captured by Deere.”

The year to come

Despite persistent uncertainty in the manufacturing segment, including skepticism about when a phase two deal with China may be struck, Thompson said he and other workers at East Moline’s Deere facility are excited about the prospect of a new combine being built there.

He said Harvester workers expect that once that new combine starts to be built at the East Moline facility, it will “take the market by storm.”

A Deere representative did not respond to an inquiry about the East Moline investment.

“It’s the single largest investment that Deere has ever put into a facility that they’re putting into Harvester. So for us, it’s a big deal because that means they’re investing in our future, and our quality at Harvester is second to none,” Thompson said.

“We build a quality machine, and that’s why people buy Deere combines. And, quite honestly, Deere has a great dealer support network for their customers, so it’s just more incentive to buy Deere.

“Yes, we have our differences with the company, but for the most part our mission is the same: to build a quality machine, provide jobs and keep people employed. We, as a union, preach quality to our members — to produce quality is job security.”

The ag community gathered inside of the QCCA Expo Center Sunday as the first day of the annual farm equipment show kicked off on a frigid winter day.

The unemployment rate for the Quad-Cities fell again in December 2019.

Deere & Company has temporarily closed its facilities in China as a result of the coronavirus outbreak.

Deere & Company had a stronger first quarter than expected, according to its earnings report released Friday.

Deere highlights 2019, lays out path for 2020 to shareholders

DES MOINES — Waiters, waitresses, bartenders, hotel employees and other workers in accommodation and food services industries who were idled b… 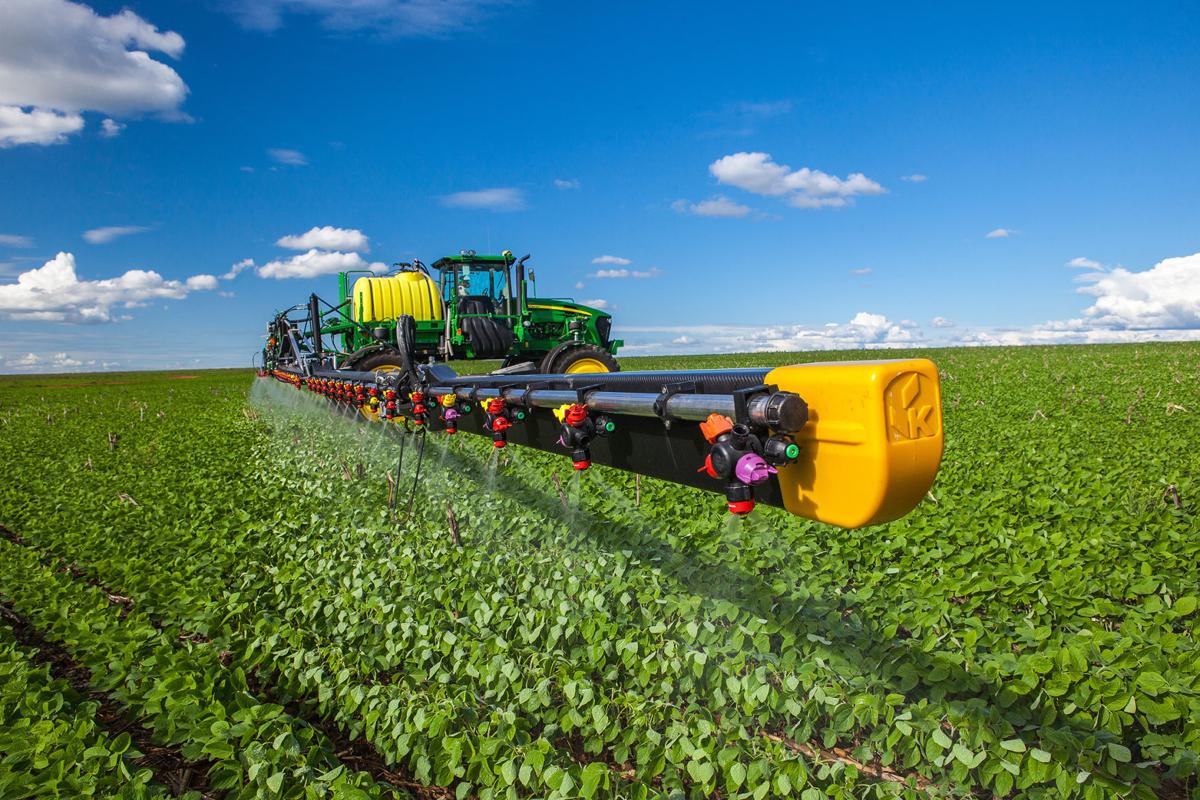 Shown is a carbon fiber sprayer boom made by King Agro. Deere in 2018 reached an agreement to acquire the manufacturer of carbon fiber technology products. 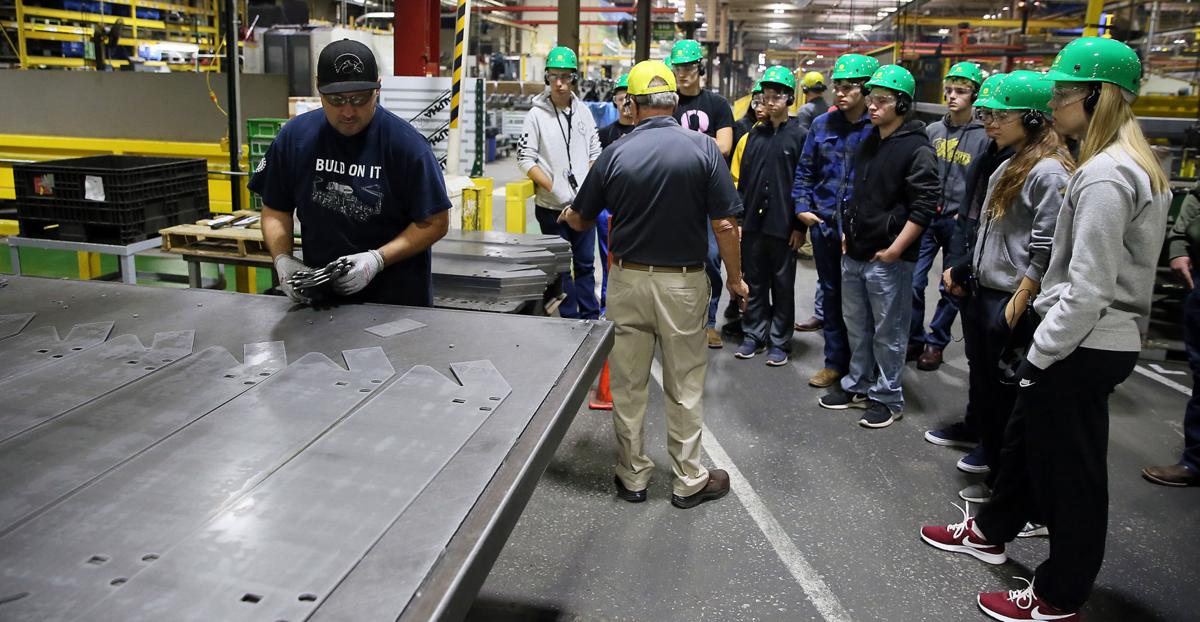 Machinist Ashley Harris explains his job in the assembly line at the John Deere Seeding Group plant in Moline Oct. 17, 2018.

A farmer dumps his load of corn into a semi trailer in 2018 while harvesting in rural northwest Scott County.

Corn from a hopper truck pours into a collection pit Sept. 25, 2018, as Dean Engelbrecht looks over at the corn dryer operating on the Engelbrecht Bros. farm in northwest Scott County. 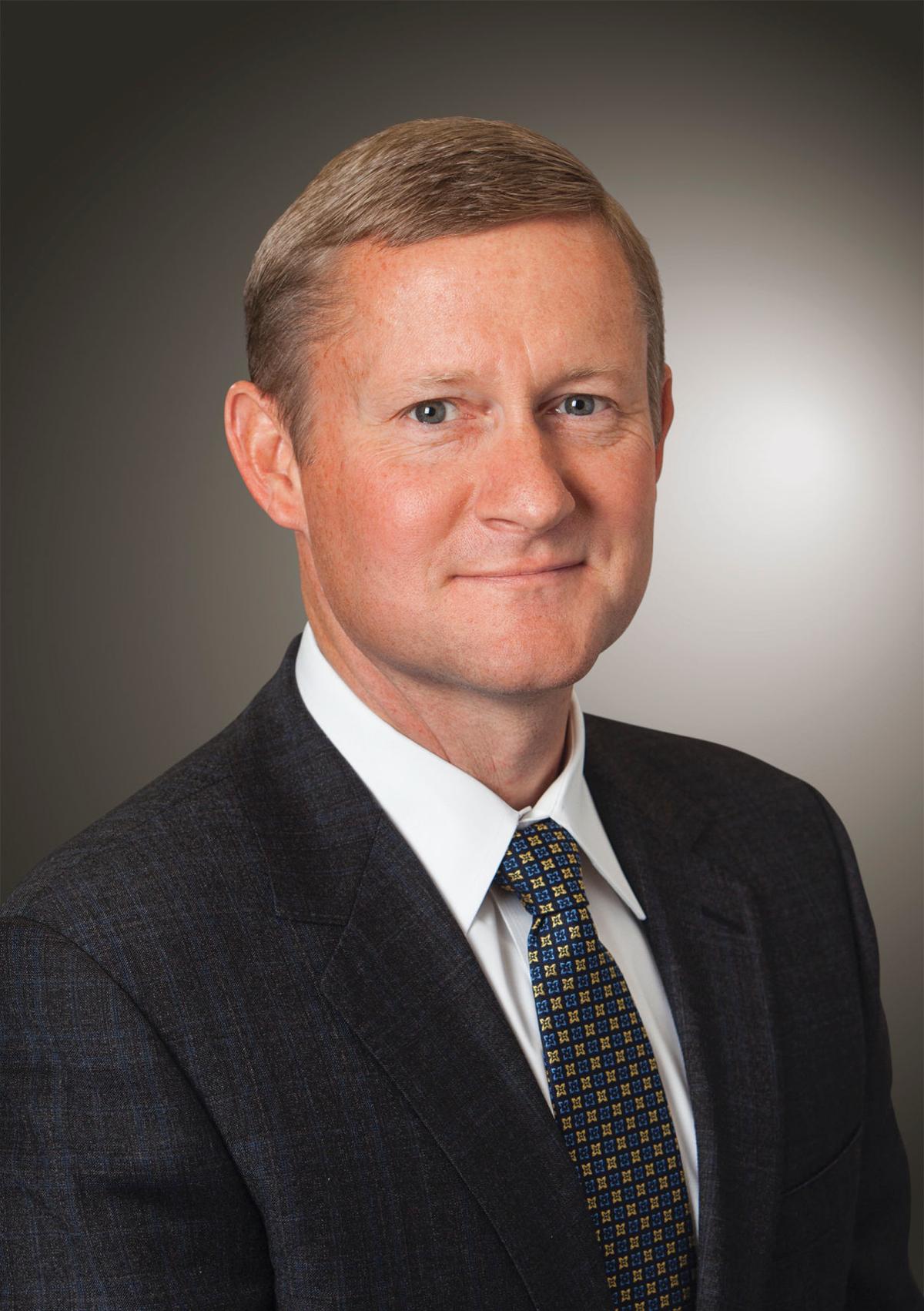