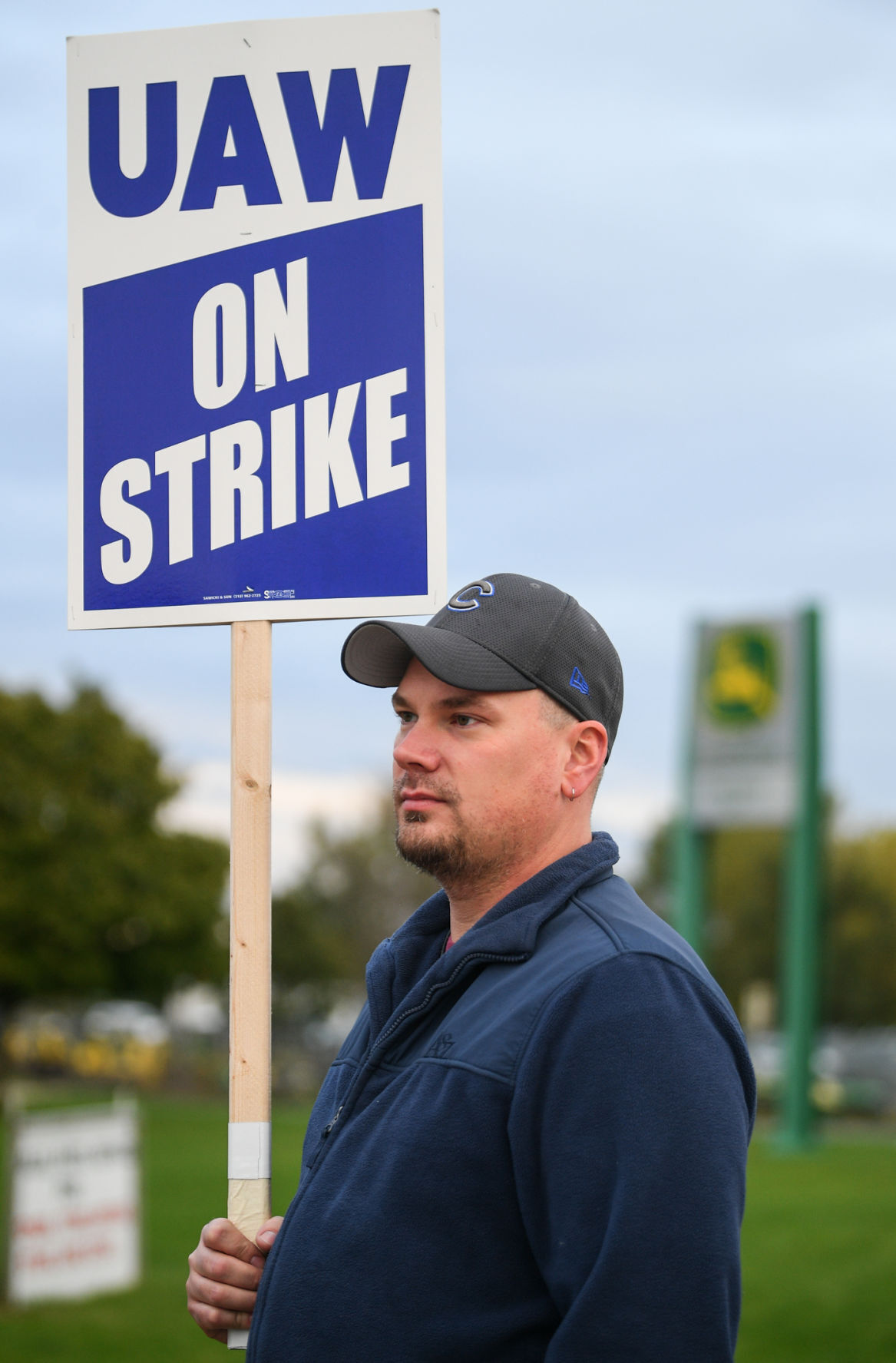 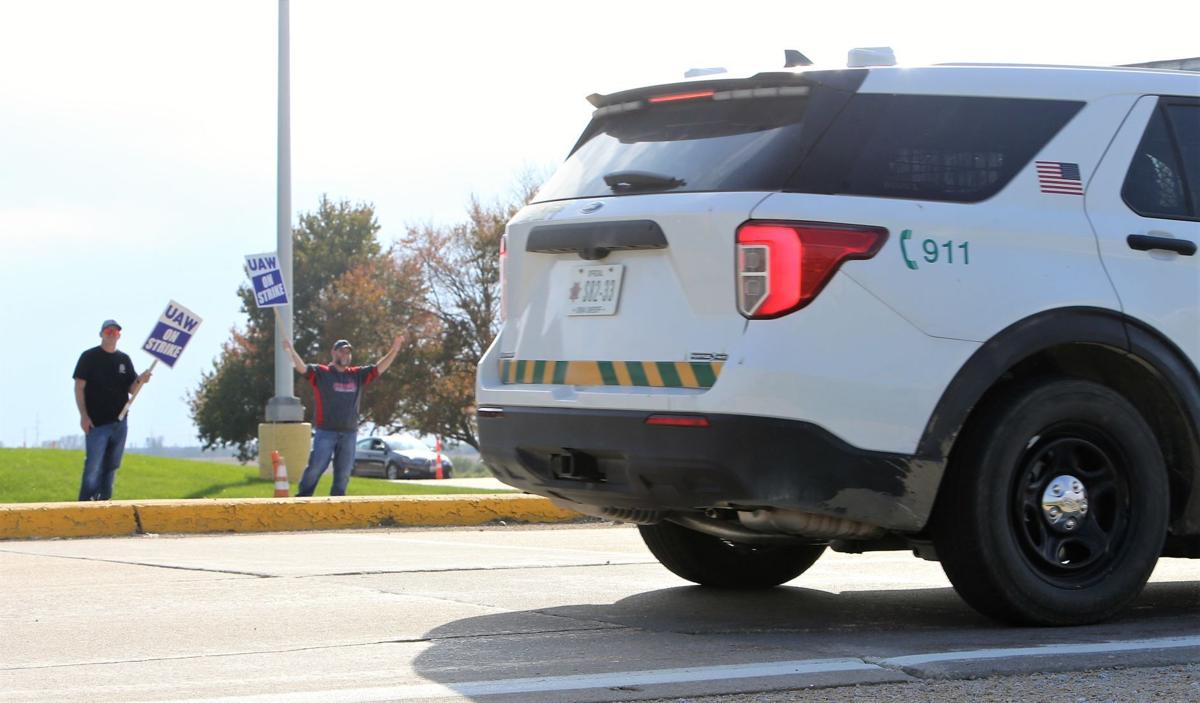 A Scott County Sheriff's vehicle drives past picketers outside John Deere Davenport Works Wednesday in Davenport. Striking Deere workers are being limited by a court order on the ways in which they can conduct themselves on the picket lines at Davenport Works. 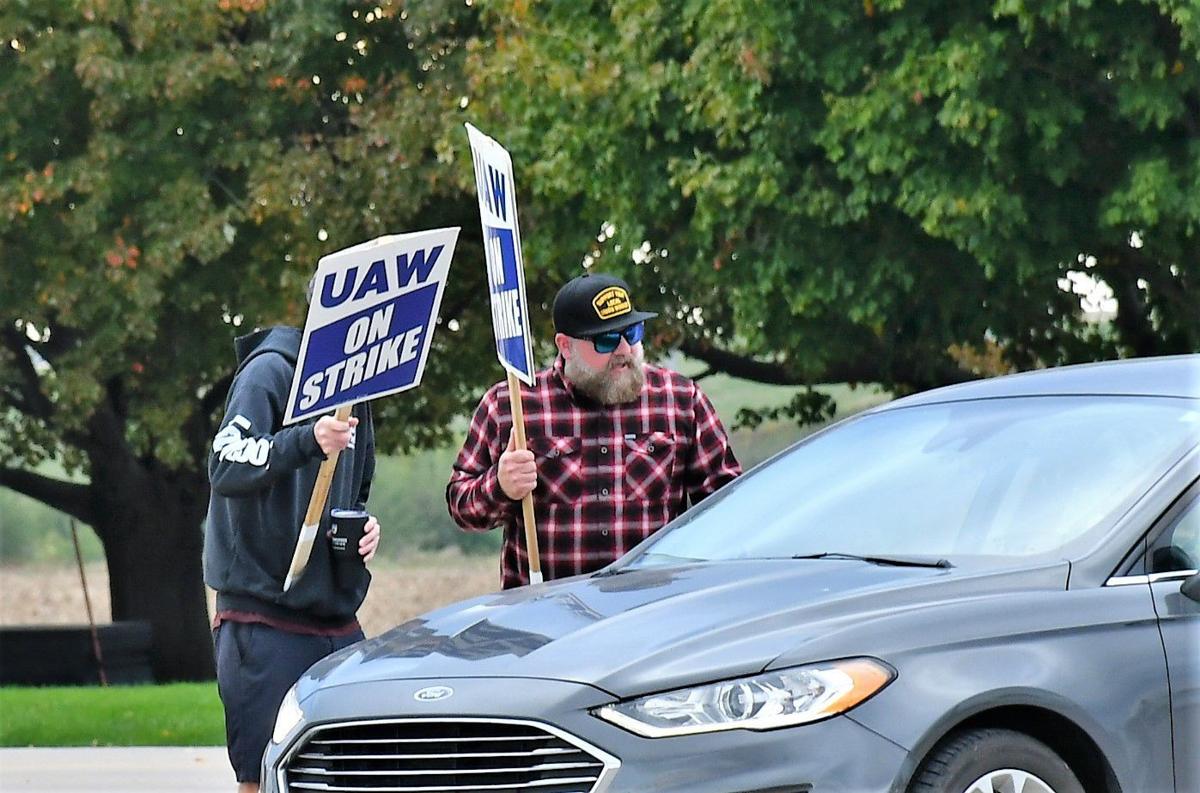 UAW picketers outside John Deere Davenport Works in Davenport. Striking Deere workers in Davenport are being limited by a court order on the ways in which they can conduct themselves on the picket lines at Davenport Works. But a judge in Ankeny declined to support such an order.

A Scott County Sheriff's vehicle drives past UAW picketers outside John Deere Davenport Works Wednesday in Davenport. Striking Deere workers are being limited by a court order on the ways in which they can conduct themselves on the picket lines at Davenport Works. 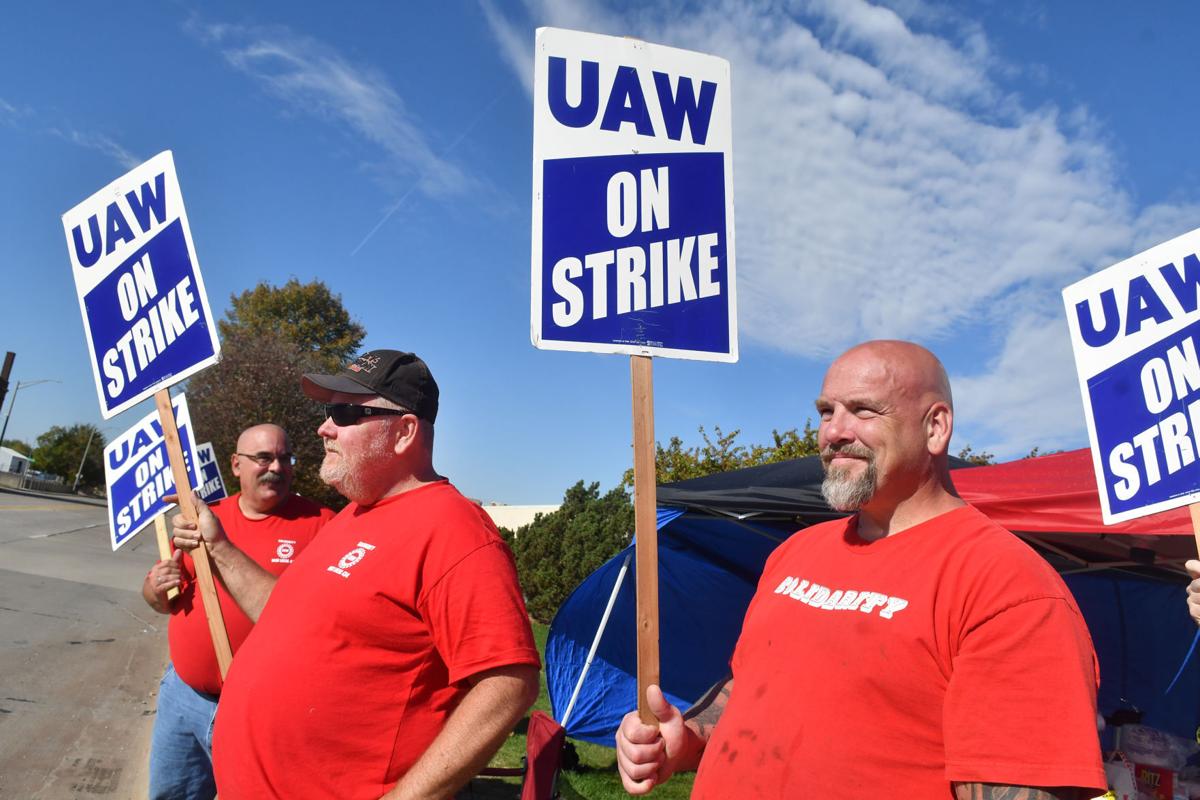 Striking Deere workers are being limited by a court order on the ways in which they can conduct themselves on the picket lines at Davenport Works.

Deere sought and received a temporary injunction, advising the chief judge of the district court in Scott County that picketers' conduct has disrupted access to their properties and put others, including UAW members, at risk.

"Deere & Co. was granted an order for temporary injunction to maintain a safe environment for all our employees and contractors — including those reporting to work and those exercising their right to strike," said Jen Hartmann, director of public relations & enterprise social media. "This temporary injunction was put in place to provide safe entry and exit to the John Deere Davenport Works facility."

Chief Judge Marlita Greve granted the injunction Wednesday, ordering the UAW to limit to four the number of picketers that can be "near" each gate of Davenport Works, banning the use of chairs and barrel fires by picketers and prohibiting harassment and intimidation tactics that at least five trucking companies have said they encountered.

Paul Iversen, staff at the University of Iowa's Labor Center, said it is unusual to see an injunction ban fire barrels and chairs. Typically, items that are banned have to be "disruptive" and "intimidating."

"The fact that you have something to keep you warm on a cold day is not usually the subject of an injunction over things that cause harm to Deere," Iversen said. "It's hard to see how burn barrels and chairs would cause harm to the company."

Iversen also said that the Deere injunction's limitation on picketers is more restrictive than he usually sees.

The injunction prohibits picketing or congregating "near the Contractor Gate entrance," which is regarded a neutral gate that cannot be picketed, Deere's documents state.

The ruling did not define "near" in specific distances.

Attorneys for Deere on Wednesday submitted a 10-page motion to the court, along with another 13 pages of evidentiary documents, seeking to prevent members of the United Automobile, Aerospace and Agricultural Implement Workers of America, Local 281 from trespassing and otherwise disrupting business at the Davenport Works facility.

Deere and the UAW failed to reach a contract agreement by their Oct. 1 deadline, compelling the strike.

The UAW now has three days to respond to the court with its compliance plan.

"As part of this strike, Union members have trespassed and have engaged in mass picketing thereby blocking ingress and egress to parking lots and plant entrances," according to court documents. "Union members have prevented or attempted to prevent or hinder non-striking employees, customers and/or suppliers from entering or exiting Davenport Works."

At least one delivery driver who was asked by Deere whether her access to or from the plant was impeded, replied it was not. However, she said picketers "almost" prevented her access.

"There's a difference between walking back and forth across the roadway so that people have to slow down and wait for you to separate," Iversen said. "That's different from standing there and not letting people through. And what you often find is that management employees just want to go through the picket line because they don't want to hear what other people have to say or see their signs or anything. ... People are walking back and forth on the roadway and they have to slow down and wait for them to part. So they start to get really pissed, but that's just part of picketing."

Others said the union members "aggressively waved their signs" and sometimes nearly blocked their view as they exited the contractor gate on Jersey Ridge Road.

"They have screamed through megaphones and other audible enhancing devices, paraded in the public road up leading (sic) to Davenport Works with banners and signs, impeded customers or contractors from attempting to enter and leave Davenport Works and have otherwise blocked the free flow of traffic on the public highways and/or into and out of Davenport Works," court documents claim. "They have committed acts of verbal and physical harassment, intimidation, mass picketing and other direct and indirect forms of intimidating acts and threaten to continue these acts."

Iversen said that since he hasn't been on the picket lines, he can't comment on whether the union workers were aggressive or not. But he said holding and waiving signs on a picket line isn't unusual.

"Holding picket signs and waving them in front of people as they go through the picket line, that's part of a normal picket line situation," Iversen said.

According to Greve's order: "Having exhausted all available options, application to this Court for injunctive relief is appropriate.

"Deere is not seeking injunctive relief against non-disruptive and peaceful Union strike picketers."

A little before 3 p.m. Wednesday there were eight picketers at Davenport Works — four at each gate. One of the picketers, who identified himself as Jeff Troutwine, said the picketers found out about the injunction around 1:45 p.m. and were told police would be called if the group didn't limit its numbers.

Troutwine said a few squad cars from the Scott County Sheriff's Department had driven by since then, but no law enforcement had stopped.

There were 26 picketers on scene when they were told about the injunction, but they cleared out quickly, Troutwine said. 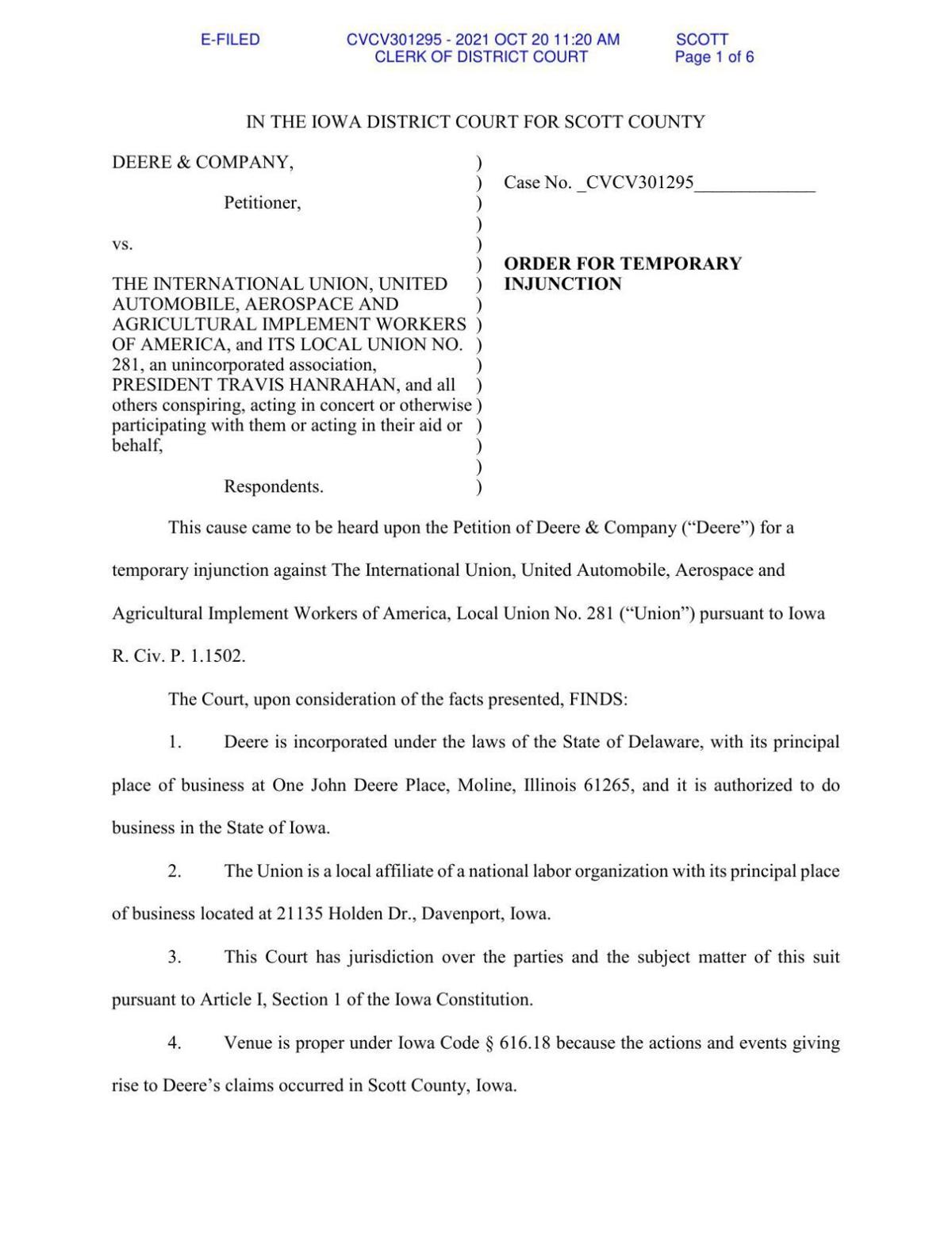 A round-up of news about the strike

Moline Police said a semi-truck entered Gate 24 of the John Deere Seeding plant in Moline driving “too fast” on the morning of Oct. 19 and near a group of union workers on the picket line.

The officer dealt with the incident like any “any other observed traffic infraction,” Moline police said in an email to the Quad-City Times/Moline Dispatch-Argus. No additional police were called to the scene.

Vilsack had visited an Ankeny farm with Mexico’s Secretary of Agriculture and Rural Development earlier in the day, where he spoke with Lee Iowa Bureau Editor Erin Murphy about the UAW strike against John Deere.

“Twenty-three years ago this month, I was running for governor and I was behind. I was way behind. … UAW was with me from the get-go,” Vilsack said. “You don’t forget the people who were with you …. UAW is important to me. I sincerely hope they get this resolved as quickly as possible and as fairly as possible.”

U.S. Senator Chuck Grassley told reporters from The Gazette that he doesn’t “find any fault with Vilsack” going to the picket lines.

“Well, I would see it as positive from this standpoint that we have Deere workers and their families now facing a very stressful situation,” Grassley said. “And I presume that he's trying to give them some comfort by going there. He can't do much more because, you know, it's covered by federal law, the bargaining process, and the negotiations are ongoing.

Grassley, a member of the International Association of Machinists in Waterloo, said it is not an easy decision to go without a paycheck.

“(Negotiations are) covered by law, and just have to wait until they work their way through it,” Grassley said. “There seems to be a movement nationally, because of the worker shortage, that unions have a lot more power bargaining now than they have before. I'm not sure I know how that affects the Deere workers. But we just have to wait until the bargaining gets done.”

When asked about the impact of the strike, Grassley said he is only able to speculate but is following the negotiations closely.

“I've heard concerns about farmers maybe needing parts and we have this supply chain problem,” Grassley said. “It could make that worse, but I don't have any evidence of that at this point.”

Watch now: Black Friday remains a day for family to shop together

Watch now: Black Friday remains a day for family to shop together

What you should ask if retirement is just around the corner

What you should ask if retirement is just around the corner

There is a National Weather Service frost advisory in effect for portions of east central Iowa late tonight into early Friday morning.

A Scott County Sheriff's vehicle drives past picketers outside John Deere Davenport Works Wednesday in Davenport. Striking Deere workers are being limited by a court order on the ways in which they can conduct themselves on the picket lines at Davenport Works.

UAW picketers outside John Deere Davenport Works in Davenport. Striking Deere workers in Davenport are being limited by a court order on the ways in which they can conduct themselves on the picket lines at Davenport Works. But a judge in Ankeny declined to support such an order.

A Scott County Sheriff's vehicle drives past UAW picketers outside John Deere Davenport Works Wednesday in Davenport. Striking Deere workers are being limited by a court order on the ways in which they can conduct themselves on the picket lines at Davenport Works.